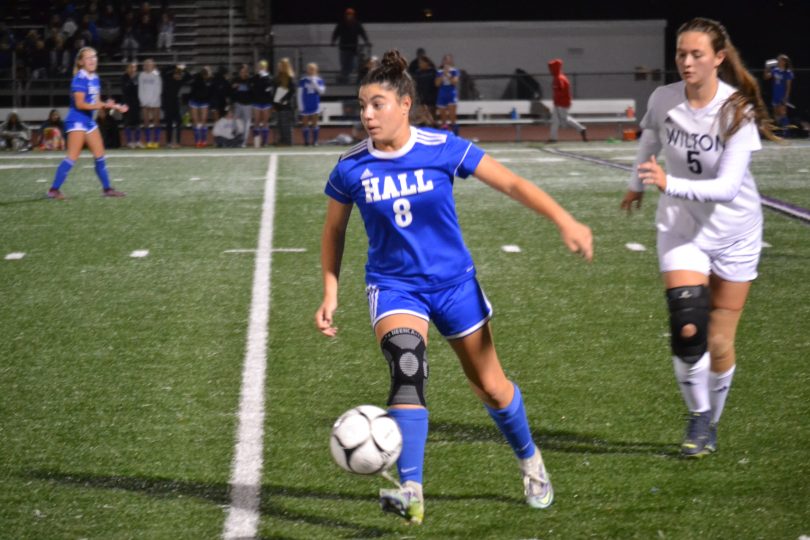 The Hall girls soccer team hosted Wilton in the second round of the CIAC Class LL tournament Thursday, ending their season with a 1-0 loss. 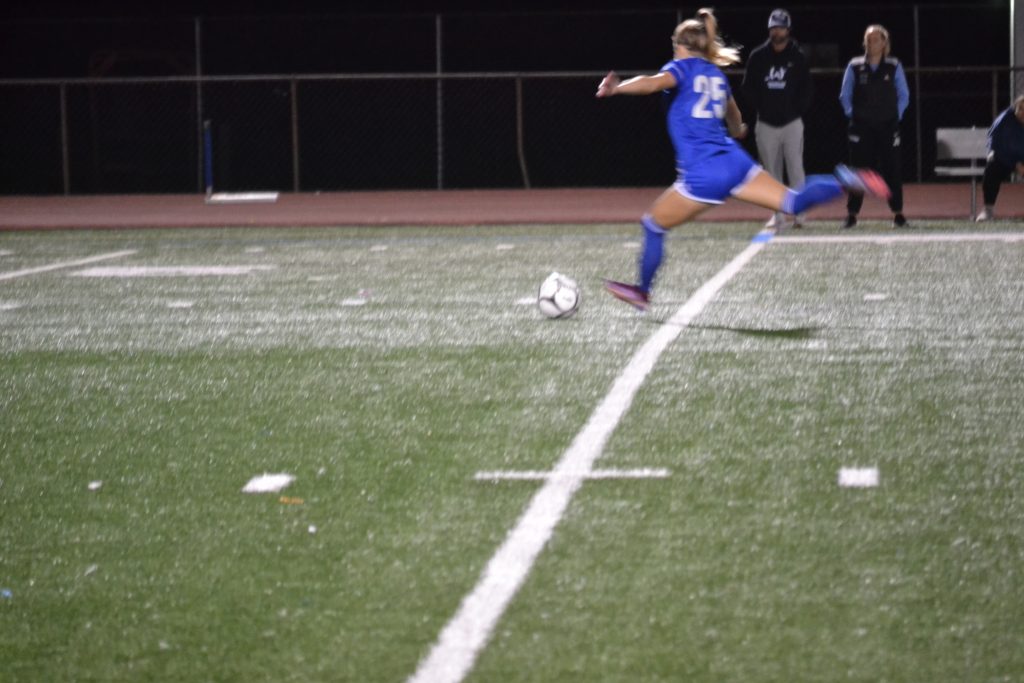 The fact that the Hall girls soccer team was able to host a second round game in the CIAC State Tournament was a testament to their spirit and resilience. After dropping two of their first three games, the Titans worked hard all season to secure a state bid, then shocked McMahon 3-2 in OT in the first round.

That grit was on full display Thursday night when they hosted No. 27 Wilton, but it was the Warriors who came away with the 1-0 win.

After the game, head coach Scott Ferguson reflected on just how far his club had come. “We start three freshmen and six juniors (out of 11 players) and I am hoping they learned they can play with anyone. I told them I was proud of them.”

The Titans returned just one senior starter for the season and Ferguson says they needed tine to gel. Throughout the up and down regular season, he said his players continued to get better. “I am so happy with this season. They grew so much.” 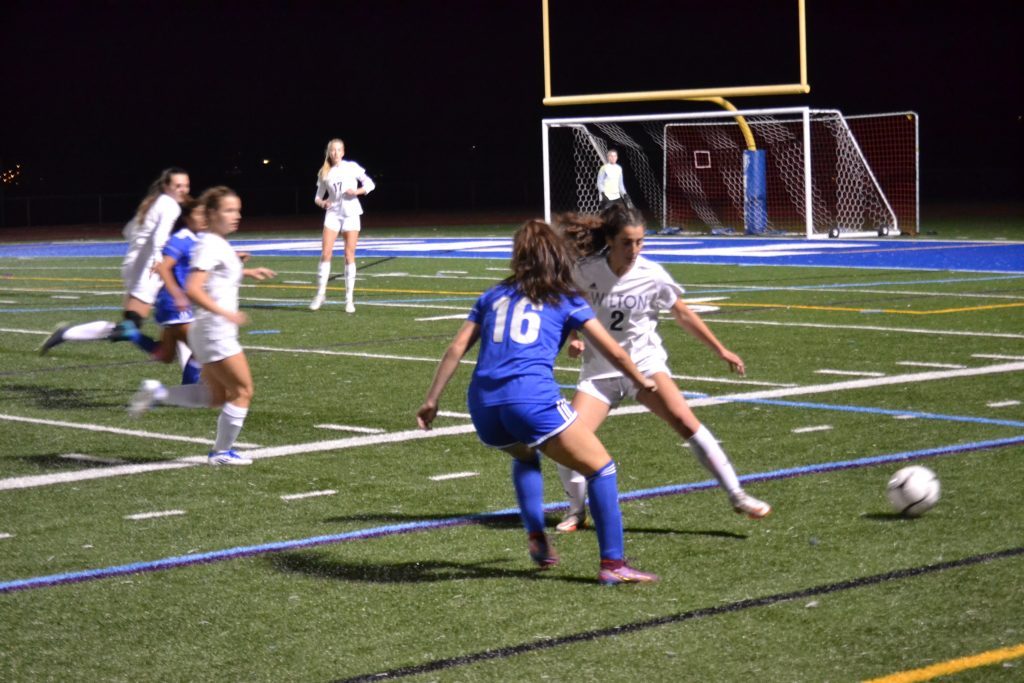 Thursday’s game started slowly for the Titans with Wilton controlling much of the early play. Goalie Gabby Deslauriers was tested just 6 minutes in when Kaitlyn Lane sent a shot on goal that the Hall goalie was in place for. Five minutes later Wilton would score the game’s first, and only, goal of the night.

The Warriors played a long ball through the Hall defenders that forced Deslauriers to charge out and try to clear. Her effort deflected off a Wilton player and bounded to the right side of the box. From there a cross came in and Talia Sortman’s effort to clear was knocked down by Lane who sent in the 20-yard shot. “It took us a little while to figure out their midfield,” Ferguson said. “Once they scored, we adjusted and were able to take control.”

Hall did come alive about halfway through the opening half. Using ball control, slick passing and some speed, the Titans were able to control the flow, but could not manage any dangerous scoring chances on the Wilton net. Junior Sarah Punt finally got a shot on goalie Addison Dobson with about 15 minutes left in the half. Lauren Moskal and Katherine Pillow were in synch, using give-and-go-passes to keep up the pressure on Wilton, while Punt’s nonstop running and effort kept Hall in the game. With 6:54 to play Sally Kritzman nearly evened the score from long distance. Her shot clanked off the juncture of the right upright and crossbar, missing going in by inches. Moskal would get Hall’s last best chance in the first half when she forced Dobson to knock down her shot and scramble to get to a loose rebound. 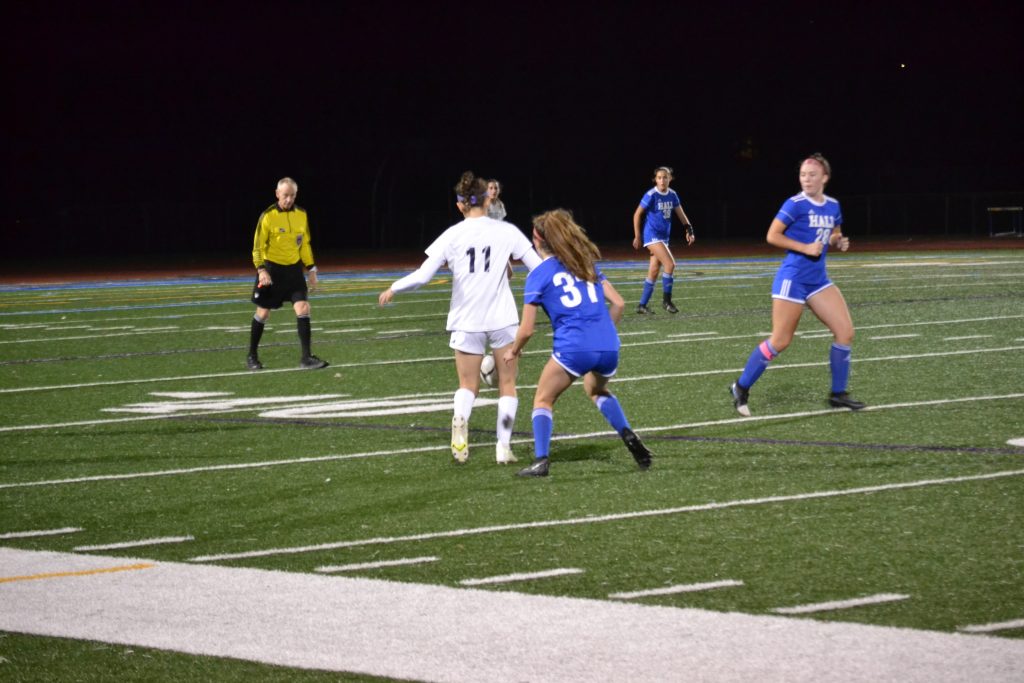 As the second half got underway, the visitors once again were getting the better of the chances, but about 10 minutes in Hall found its rhythm. Junior Maddie Maxwell was pressuring Wilton players all over the field and battling and winning possession for Hall. The Titans launched two dangerous long balls into the Wilton box for Moskal to try to run onto. Both times Wilton was forced to concede a throw-in when they knocked the ball to touch. This stretch of the game saw Hall’s energy level and pursuit reach their peak, as no ball went uncontested on defense, and overlapping runs, tight passing, and team pressure ruled the attack.

Wilton’s back three was able to weather the storm, led by senior Molly Snow’s play. They stayed calm under the relentless attack from Hall until the Warriors were able to turn the tide on offense. The Warriors managed to get off a pair of long shots that went wide of goal on the end of a pair of possessions. Hall would get one of its best chances late in the game when Punt’s free kick from 35 yards out dropped into the box and Maxwell was able to get off a turnaround shot that found its way to Dobson.

Despite the chances for both sides, no one was able to score in the final 40 minutes and Wilton’s first half goal stood up for the 1-0 win.

“Of course, you want to win every game,” Hall’s Ferguson said after the match. “ I told them all next year’s foundation was laid by our seniors this year, and I am excited about next season.” 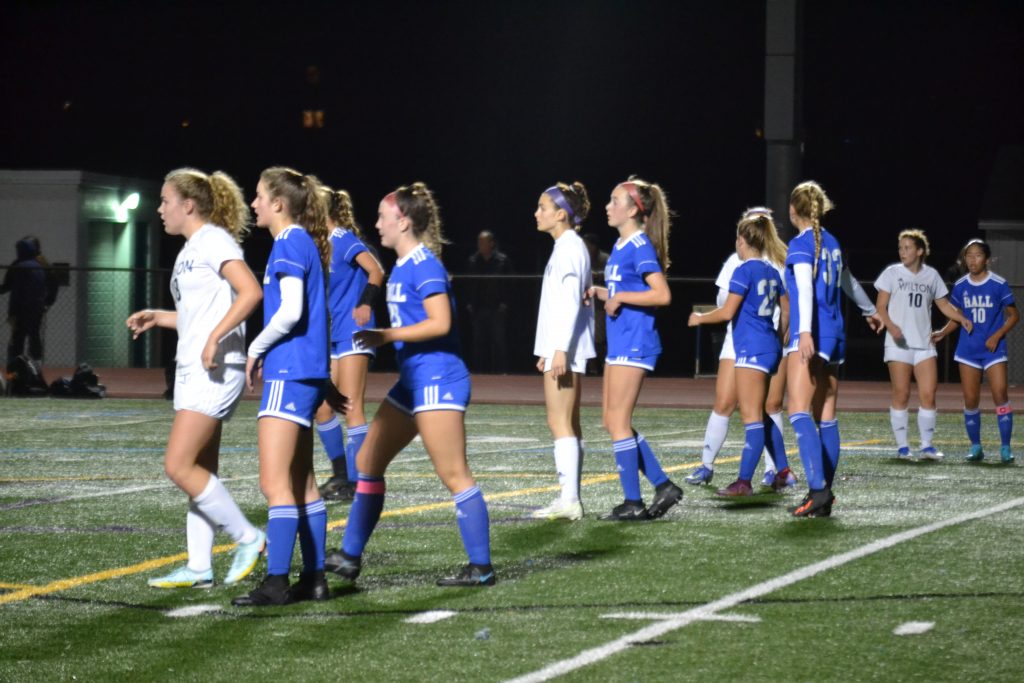