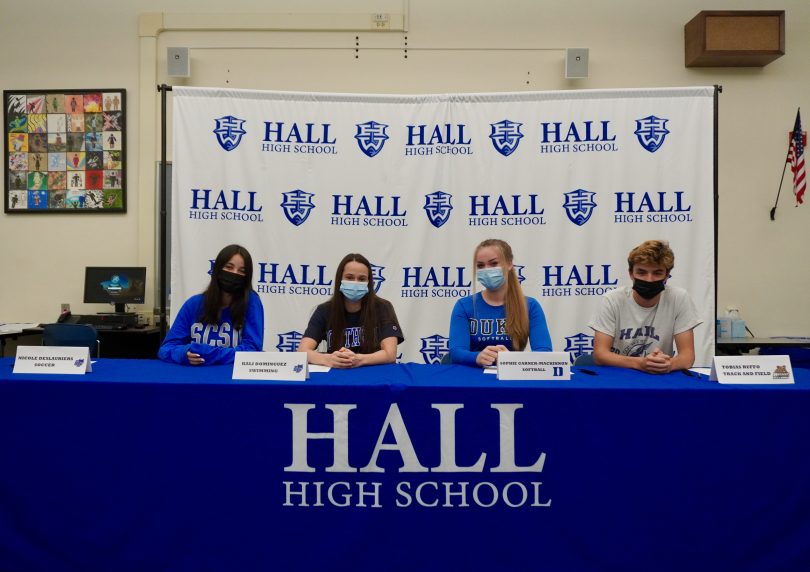 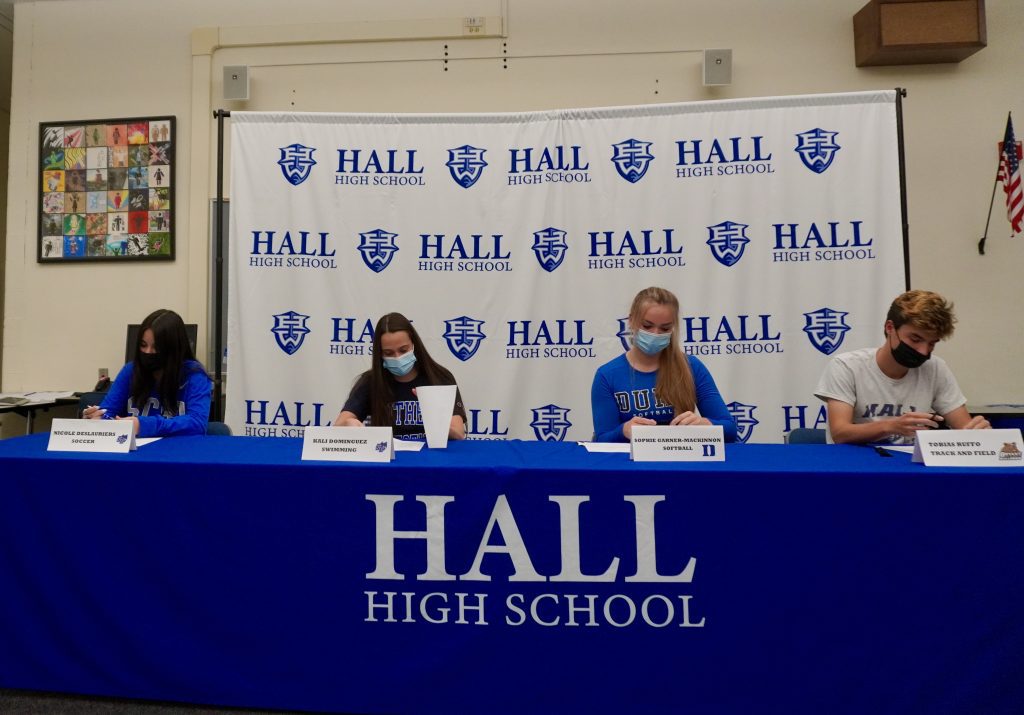 Families and coaches, and fellow student-athletes, gathered at Hall High School Wednesday morning on the first day of the NCAA’s early signing period, as four seniors signed national letters of intent to participate in sports at the collegiate level.

Kali Dominguez and Nicole Deslauriers officially signed their commitments to attend Division II Southern Connecticut State University, where they will participate in swimming and soccer, respectively.

“This is a great next step in the next chapter of your outstanding athletic careers,” Athletic Director Jason Siegal told the students. “Congratulations, I’m super proud.”

Coaches each shared a few words about the athletes.

“She started off as an excellent player but she moved herself into a superb player, basically un-markable,” Hall girls soccer coach Scott Ferguson said of Deslauriers. “Not only is she phenomenally skilled but she works tremendously hard to improve her game and clearly became one of the best players in the state.” 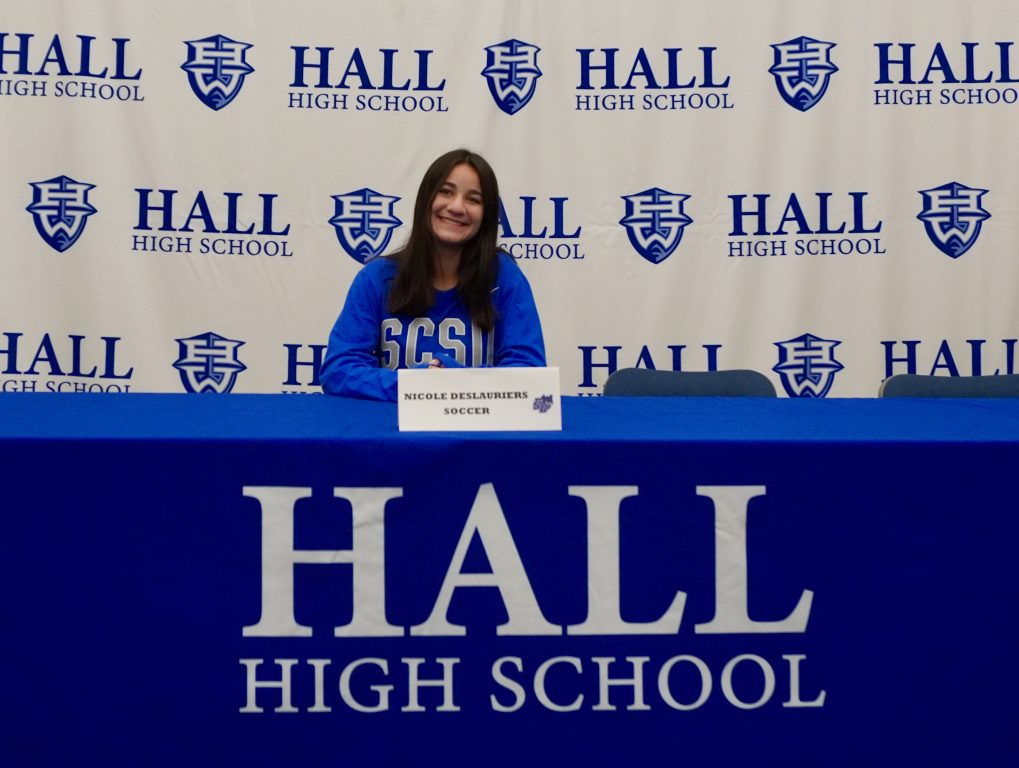 Track and field coach Jeff Billing said Ruffo will be missed, not only by the track and field team, but also by the boys soccer team where he plays a key role. “One of the things that stands out to me about Tobey’s career is that so far, fingers crossed, every season that he has played … the teams that he has been a part of have either won a state championship or been runner up for a state championship.”

Ruffo’s success, “speaks to his talent and his ability, and his leadership,” said Billing, noting that he is glad to have two more seasons to coach the star athlete on the track. 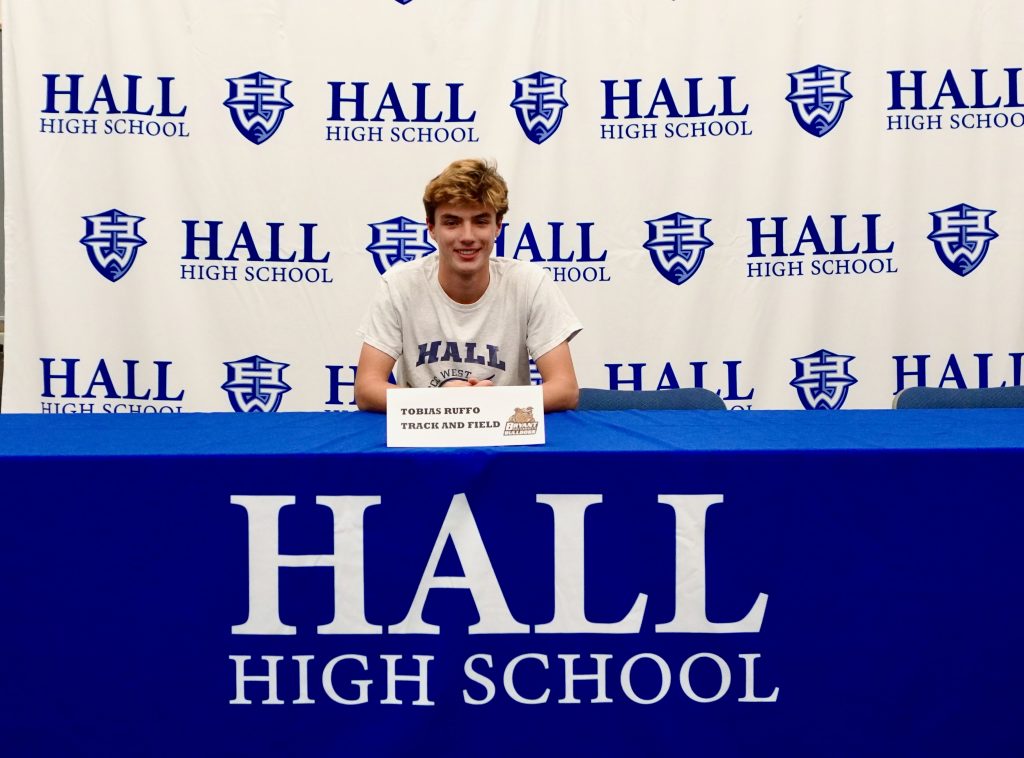 “I’m so happy we get one more year, one more run,” Lewis said, looking ahead to the spring softball season.

It’s been more than a year since Garner-MacKinnon verbally committed to Duke, and she was happy to make it official by signing her letter on Wednesday.

“I chose Duke because it was the best combination for academics and athletics and both were really important to me and I wasn’t willing to sacrifice either,” she told We-Ha.com. “That’s what really stood out for me.” 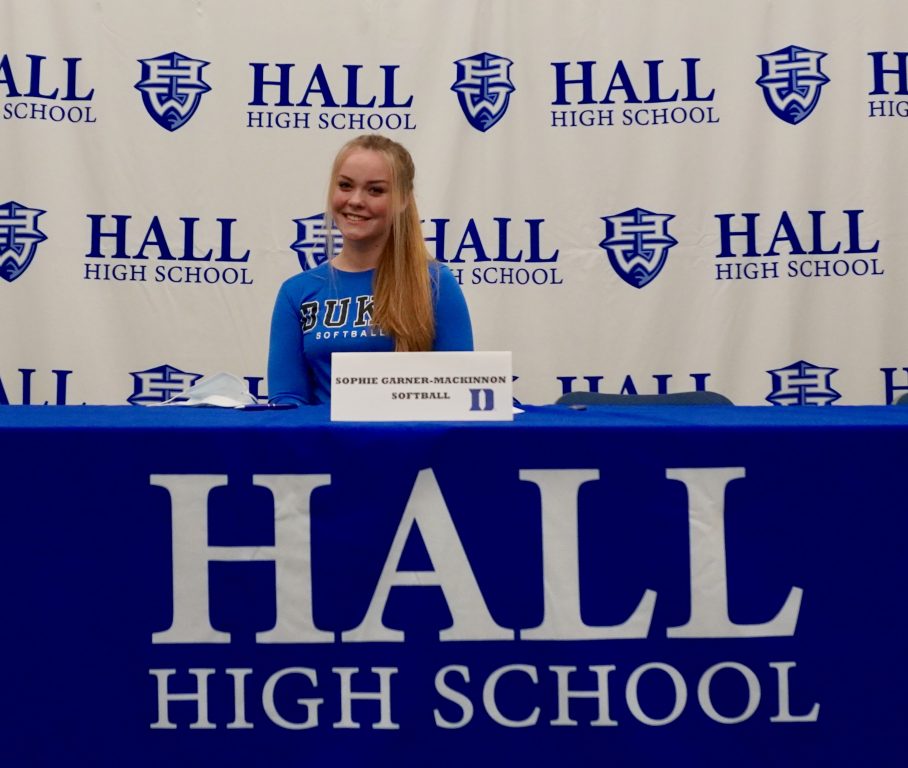 Swim coach John McClure said Dominguez has worked very hard to become one of the best swimmers in the state, and was all state in two events last year and holds a Hall record.

“She was elected captain this year, and she became a great vocal leader for us and was one of the most important people on the team in getting us where we are,” said McClure. He’s looking forward to Dominguez’s leadership in the state meet this coming weekend. 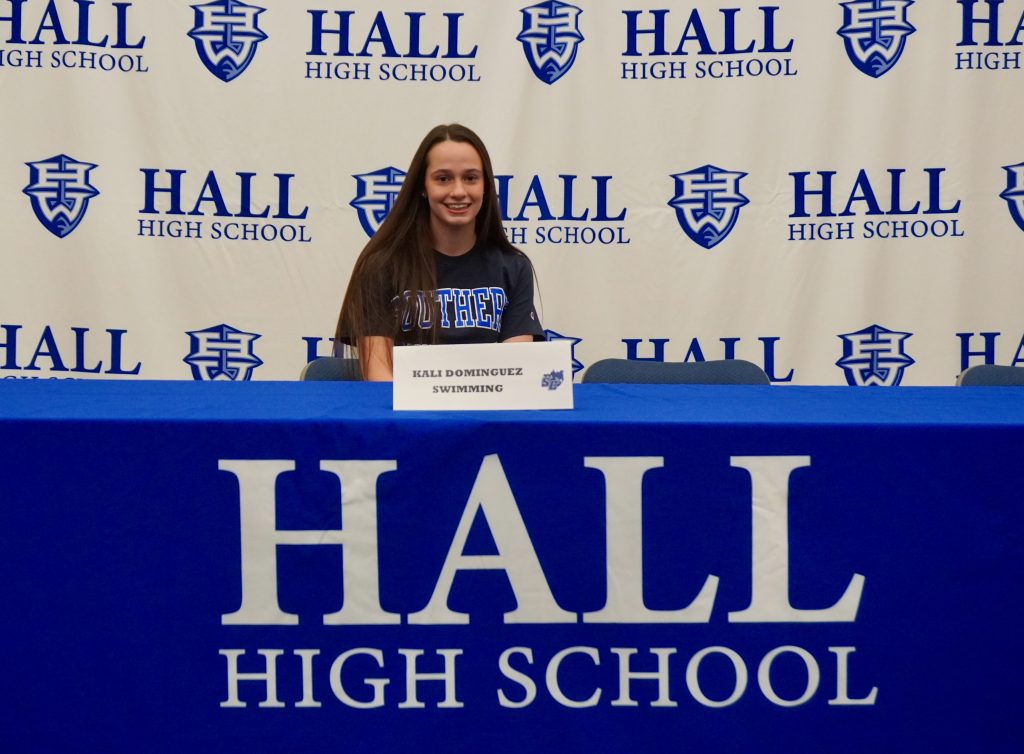 Hall Principal Dan Zittoun said that nine years ago the school was well known for its music and arts programs, but in recent years the school has also turned into an athletic powerhouse, with more state championships in the past five years than in the 50 or 60 years before that.

“To have the cross country team win a state championship at the same time have the soccer team vying for a state championship … to have really all the programs in the tournament, to have the softball program become this team of prominence to watch the swimming and the soccer.” That doesn’t just happen, Zittoun said, but is thanks to the dedication of the athletes and their coaches. 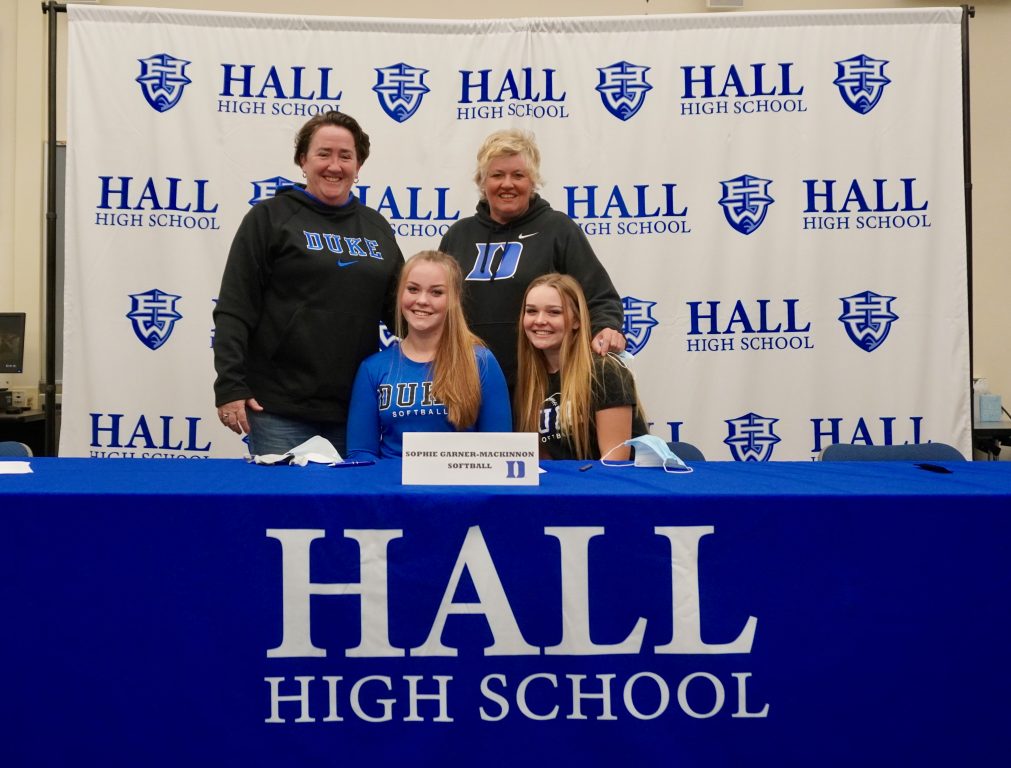 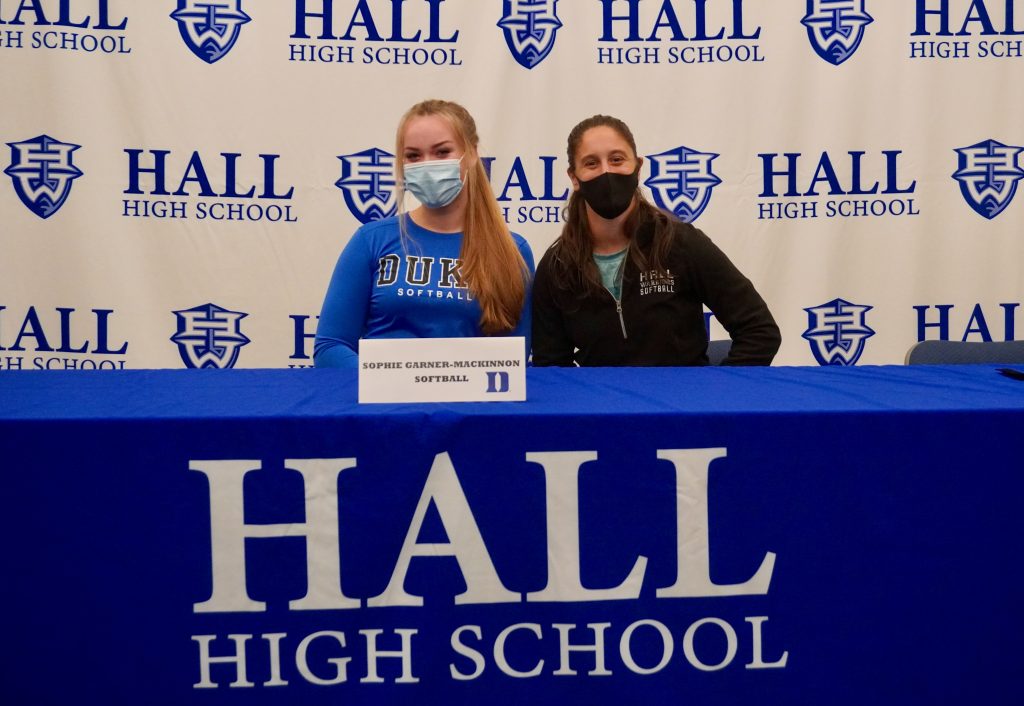 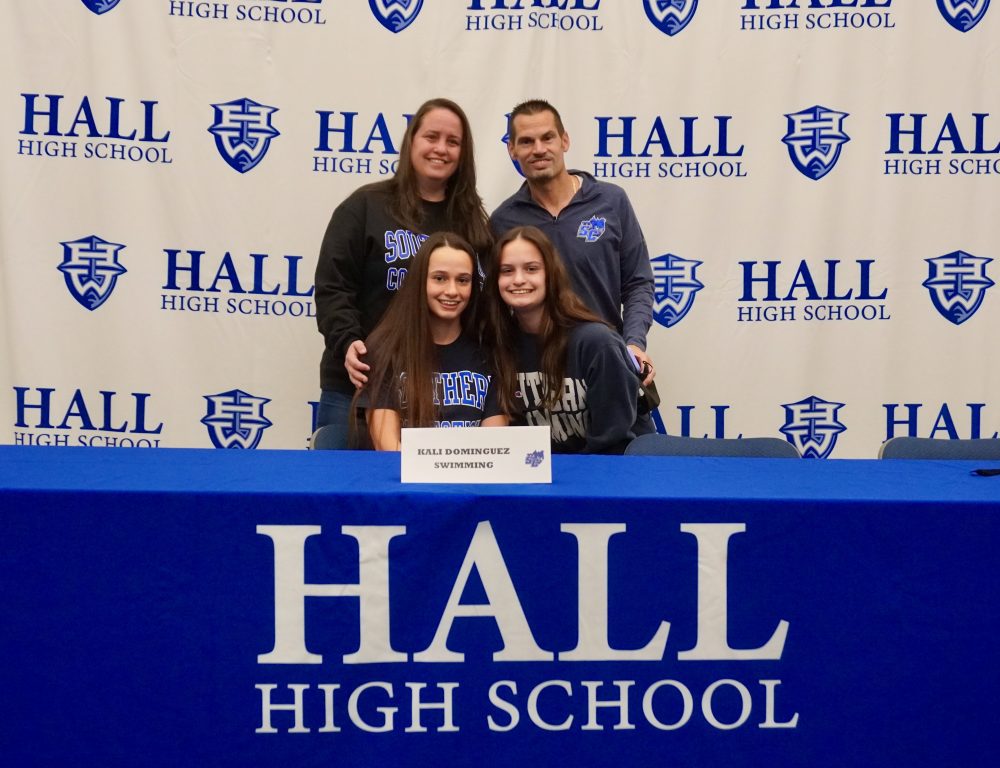 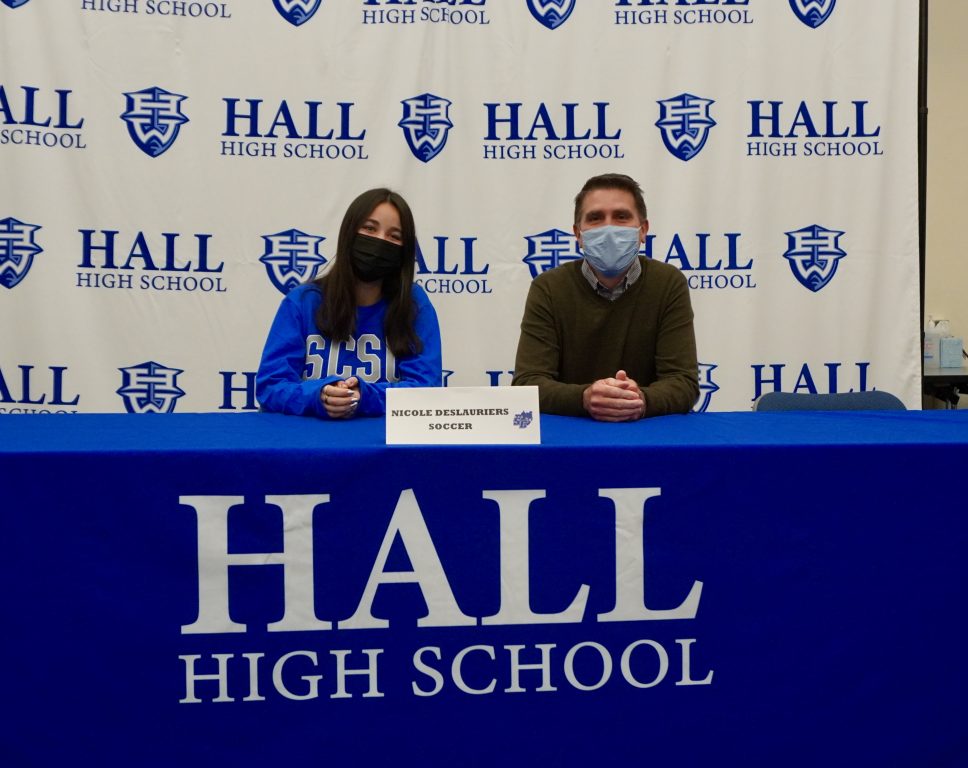 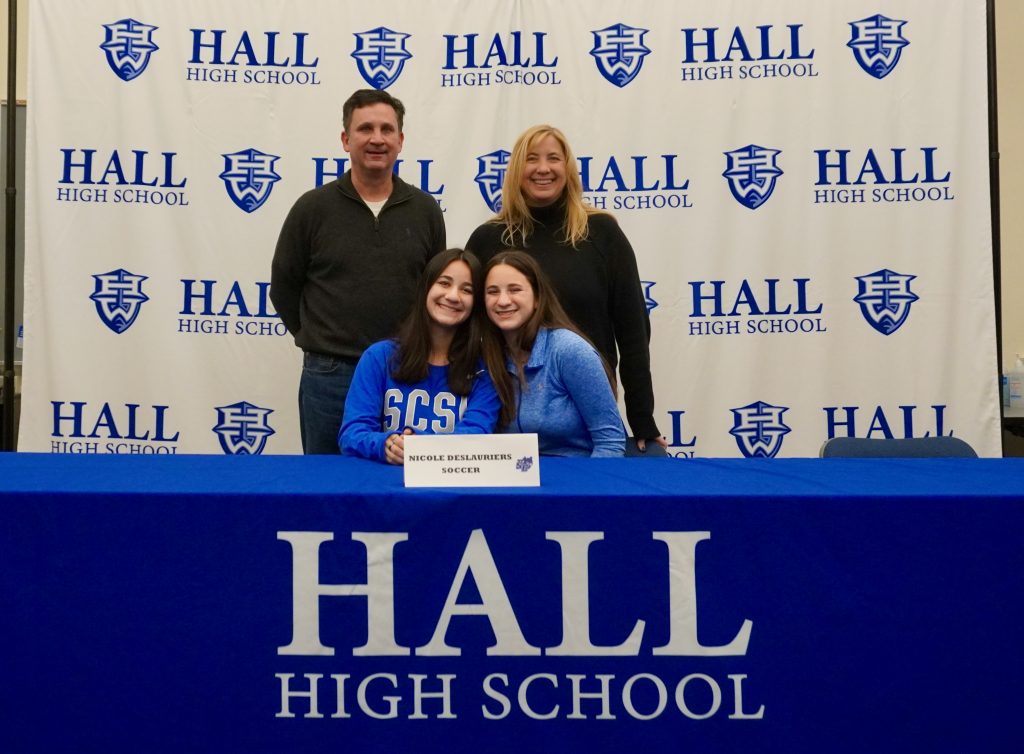 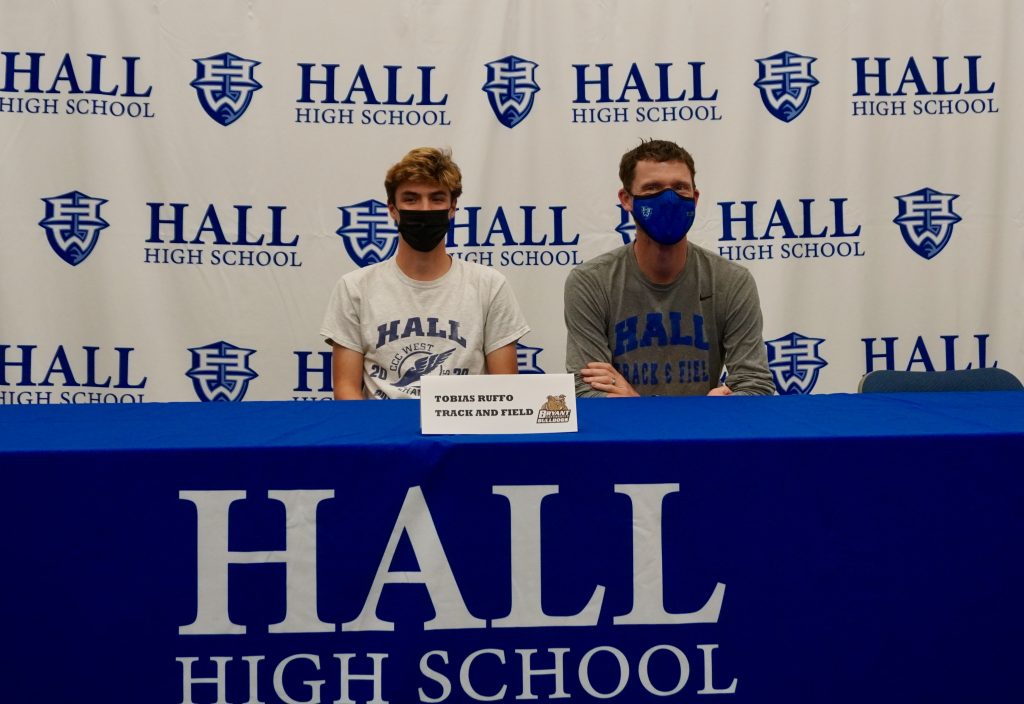 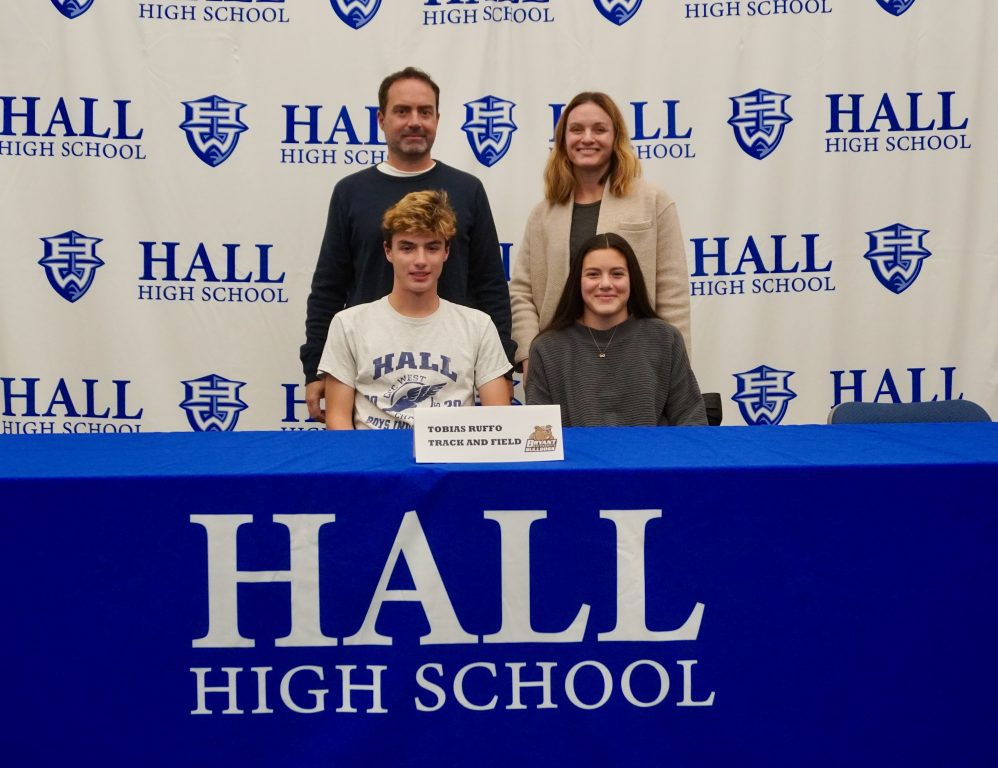