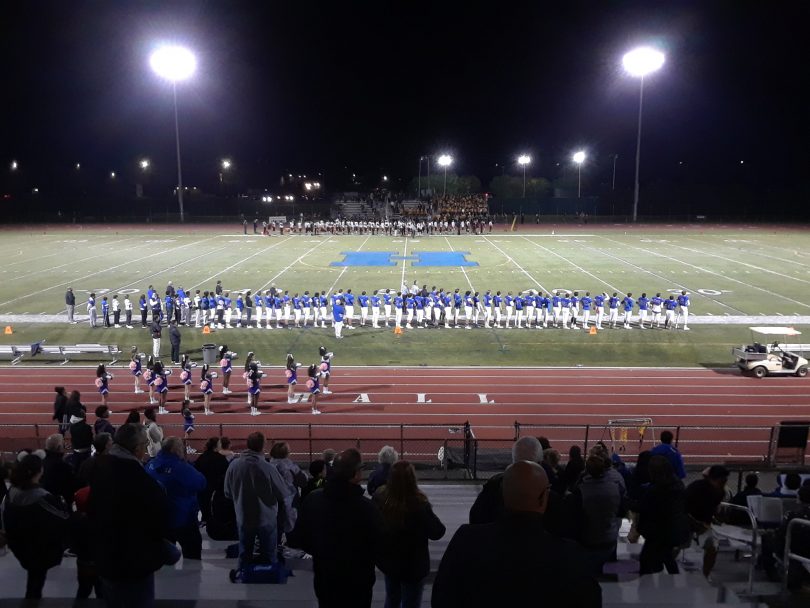 Hall could not find a way to stop New Britain’s potent rushing offense as its losing streak extends to five games.

The Warriors had no answer for New Britain’s dual-threat rushing attack as they fell to the Golden Hurricanes 51-14 at Robert S. Chalmers Stadium in West Hartford Friday night.

Running back Shawn Robinson and quarterback Tahje Yopp spearheaded New Britain’s offense as they found the end zone three times each. Robinson ran three touchdowns in, while Yopp scored twice on the ground and once through the air.

Thomas Sullivan scored Hall’s two touchdowns on the night, one rushing and one passing. Gabe Salomons notched six receptions for 106 yards and a touchdown, while Nolan Tibball caught five passes for 80 yards.

While connections between Sullivan his receivers were present at times, Hall head coach Frank Robinson said early dropped passes derailed the initial momentum of the offense.

“Right from the start, we just dropped too many footballs, and when you do that, it doesn’t open other things up,” he said. “If we can just make sure we maintain catching the ball and making good plays – Gabe [Salomons] made some good plays, but also Nolan Tibball did on one of the drives there – if we can make plays like that, we’ll be alright. It’s not a game of one thing; it’s a game of many, so we’ll just keep getting after it.”

The Golden Hurricanes scored first on a one-yard carry by Yopp to take a 6-0 lead with 9:16 left in the opening quarter. The touchdown capped off a 10-play drive without a pass attempt.

Hall started slowly on offense as two of Sullivan’s passes went through receivers’ hands on the Warriors’ opening drive, resulting in a three-and-out.

After another Warriors three-and-out, Yopp scored a 15-yard rushing touchdown with 1.8 seconds remaining in the first quarter. The Golden Hurricanes made a two-point conversion to go up 14-0 into the second.

New Britain recovered a fumble on the ensuing kickoff to start the second quarter with the ball. Robinson wasted no time punching it in as he scored a 32-yard touchdown on the first play of the drive. Another successful two-point try made it 22-0 with 11:48 left in the half.

Sullivan and the offense found a rhythm in the second quarter as they completed a 17-play, 80-yard touchdown drive. Sullivan scrambled left and found the end zone to put Hall on the board, cutting the deficit to 22-7 with 4:41 in the half.

On another rare pass attempt, Yopp connected with Chris Maldonado for 22 yards and a touchdown with 1:09 left to push New Britain’s lead to 28-7 after a failed two-point conversion.

Sullivan led a four-play, 37-second touchdown drive to draw the Warriors closer before the half. Sullivan found Tibball for 31- and 20-yard completions before throwing an 18-yard TD to Salomons to bring the score to 28-14.

The Golden Hurricanes capitalized on another fumbled kick return to open the third quarter. Robinson scored another rushing touchdown from the Hall 5-yard line with 11:40 left. New Britain went for two to make it 36-14.

Robinson scored his third touchdown with 4:09 left in the third, and the Golden Hurricanes made another two-point conversion to put the game out of reach at 44-14.

Hall falls to 1-5 on the season with the loss. Robinson said the team is playing through a host of injuries, missing nine starters, but they are doing well through the ups and downs of the season.

“They are so resilient. They bring it every practice, and that’s not an issue,” Robinson said. “[I]t’s health. We just need to be healthy, and we’re asking a lot of the guys who are younger, but like I said, they’re doing a good job. [We’ll] just keep doing what we’re doing. Perseverance is a good thing to learn in life.”

The Warriors continue the season on the road against Manchester (2-4) on Friday at 6:30 p.m.