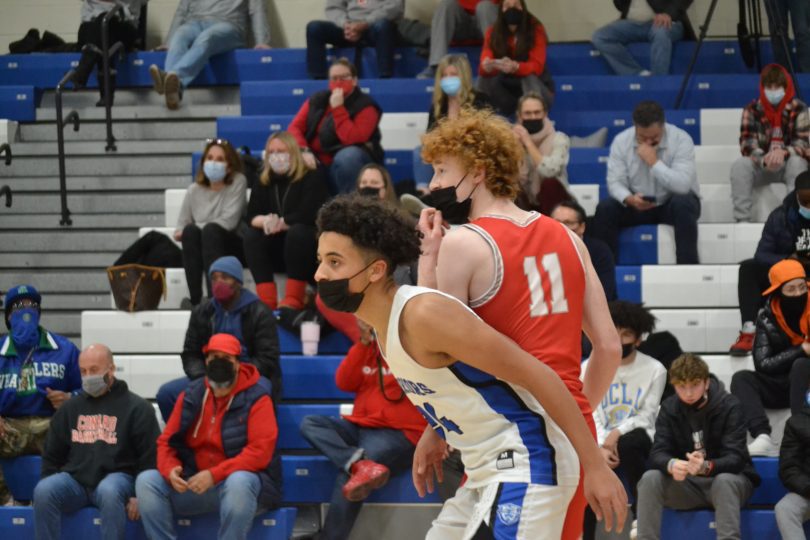 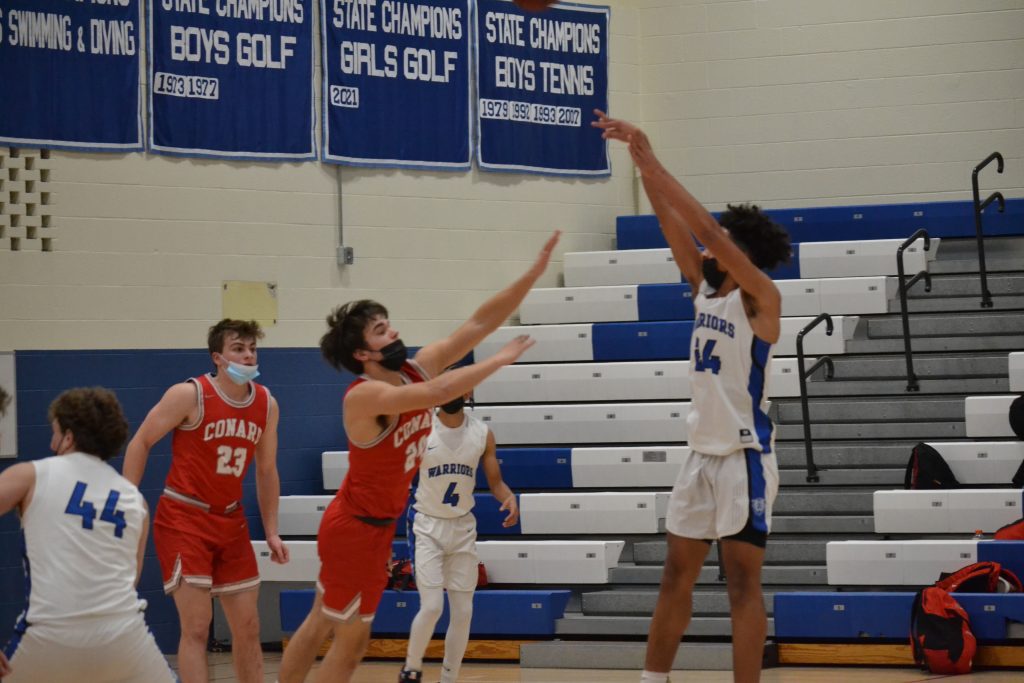 If moral victories counted, the season series would be Hall 1, Conard 0 in boys basketball. But what counts is what happens on the court, and Tuesday night the Chieftains had just enough to hold off a scrappy Warriors team, 51-40.

“They are so much better than a 1-win team,” said Conard coach Jared Leghorn of Hall. “All week we told our kids, do not look at their record, this is a rivalry, road game.”

It felt like a rivalry game from before the opening tip. Student sections on both sides were vocal in their support, lending a big-game feel to the game.

Hall would get off to the quick start hitting the game’s first points. Conard would start asserting itself and when Riley Fox hit a 3 to give the Chieftains the 11-8 lead, the momentum was shifting. Fox, however, was hit with a technical foul for blowing a kiss to the Hall fans after the basket. 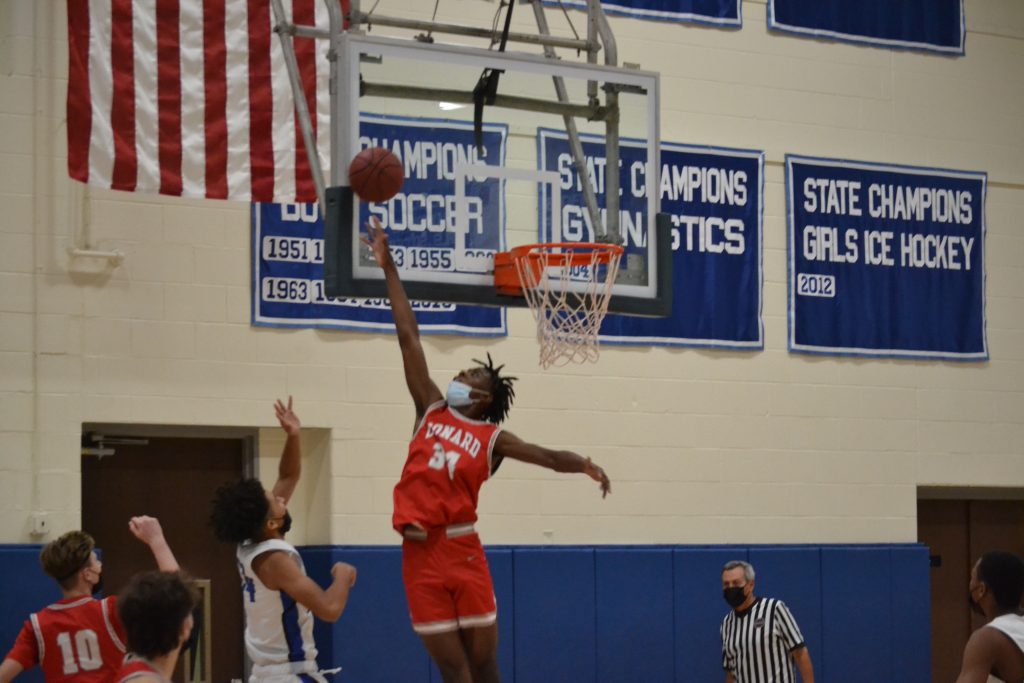 The first period was competitive, but also had its stretches where Hall struggled to score. At the break it was 16-12 Conard, with Fox leading all scorers with 7 points and Alex Momeka pacing Hall with 5, Momeka had a very strong overall game, guarding Fox on one end of the court, and chipping it 10 points on offense.

Conard pushed the lead to 9 with 3:21 to play in the second quarter before Hall’s Amare Dugue hit a 3, followed by a basket from Momeka, and then Ixael Albino stole the ball and converted at the other end and it was just a 3-point game at the half. 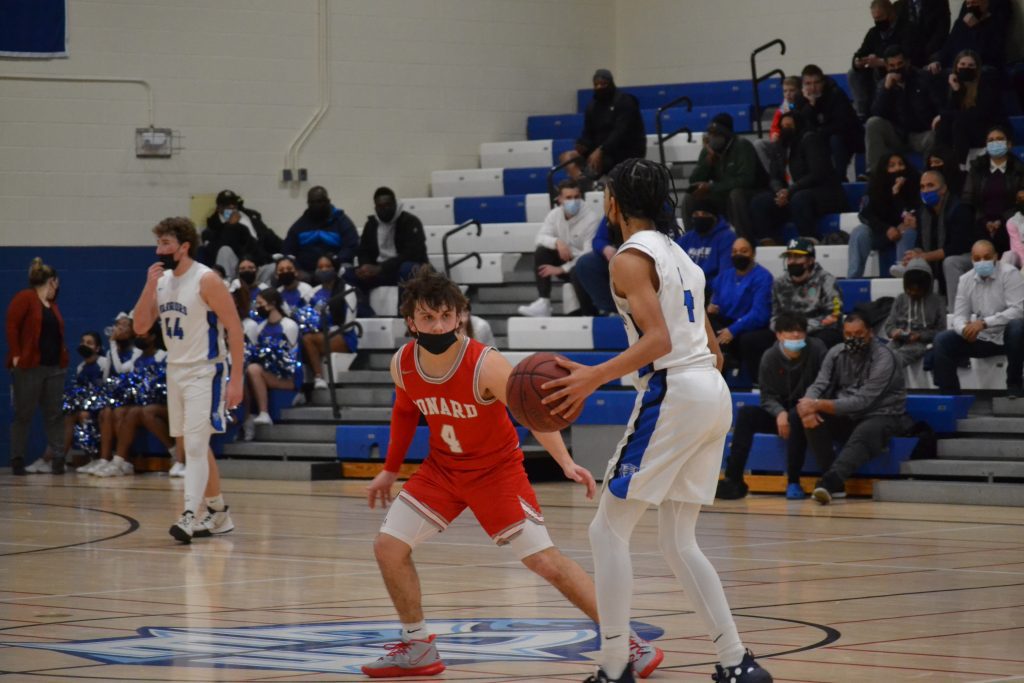 One of the game’s best match-ups was between Amecca Freeman of Hall and Conard’s Declan McCann. The two guards dictated the pace for their teams, broke presses, and guarded each other tightly all game long. “Third-two minutes tonight [for McCann],” said Leghorn. “He gets us into it and he is amazing.”

As the third quarter opened, Hall was looking for the game-tying 3 but missed multiple longrange shots. With Conard holding a 29-24 lead, Freeman hit the driving lay-up for Hall  to cut it to 3. But Fox would find Ryan Bushnell and his lay-up put it back to a 7-point lead with 4:46 to play.

Bushnell, who had missed several games to start the season, gave Conard another dimension around the rim at both ends of the court. “He anchors our defense and is one of our better passers,” Leghorn said of Bushnell. The junior would finish the game with 12 points for the Chieftains.

Hall’s shooting woes continued later in the third, and Conard managed to run up an 8-point lead before Hall scored with 2:20 to go.

You could excuse Leghorn and his players for not feeling totally comfortable entering the fourth quarter. Twice last year the Chieftains led Hall in the final quarter, only to see the lead slip away with the Warriors winning both games.

Leghorn used those games to remind his team this week about the need to finish. “We watched last year’s games and I told them we had to be able to win close games.”

Maybe Hall watched those same tapes, as the Warriors came out strong in the final quarter. Joe Dooley’s basket cut the Conard lead to 39-36, then Dugue picked off a Fox pass and took it the length of the court for the lay in.

The middle of the fourth was a rough patch for the normally consistent Fox. In addition to the errant pass, he missed four straight shots, before dropping a 3 with 5:30 to play that gave Conard a 42-38 lead.

Junior Matt Santoro had a solid fourth quarter for Conard with his ball handling breaking the Hall press, and a series of passes that led to baskets for the Chieftains. He would find Bushnell with a no look pass for the lay in and then it was McCann finding Bushnell with the bounce pass. He head-faked two defenders out of position before laying it in, giving Conard an 8-point lead,

The two sides traded baskets as the time wound down, with neither side giving an inch, but Conard was the stronger of the teams and walked away with the 51-40 win.

Conard moves to 9-1 on the season – good enough to be ranked No. 14 in the state. They face a monster challenge next Tuesday when one of the state’s top teams – Northwest Catholic – comes to call.

Hall slips to 1-10 on the year. Saturday –  weather permitting –  the Warriors will finish their game with Harding that was stopped a week ago by an on-court fight. 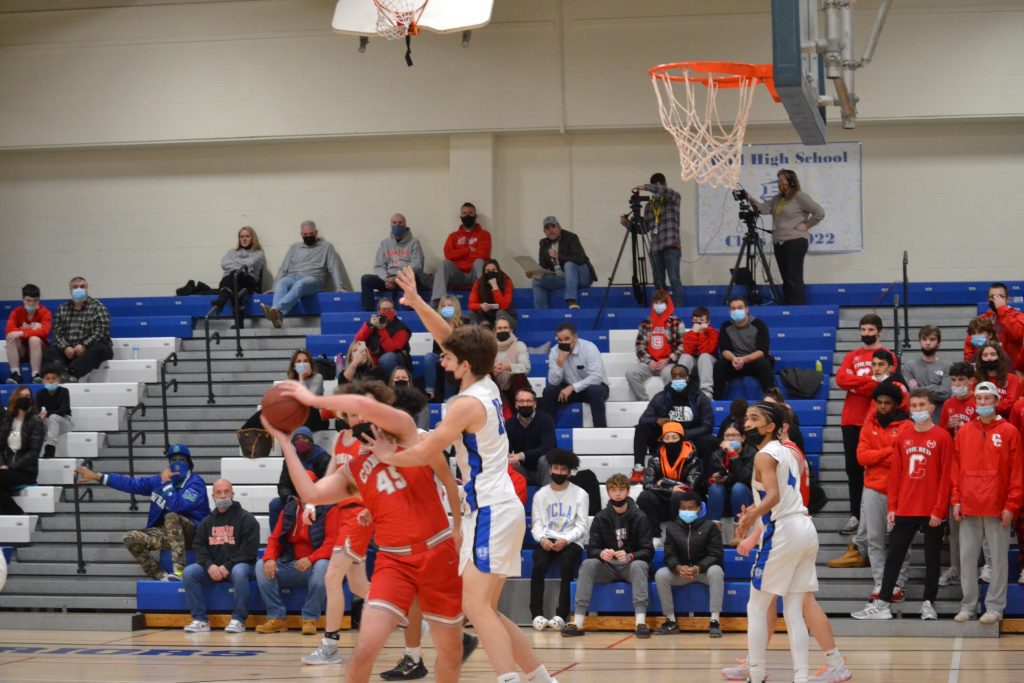