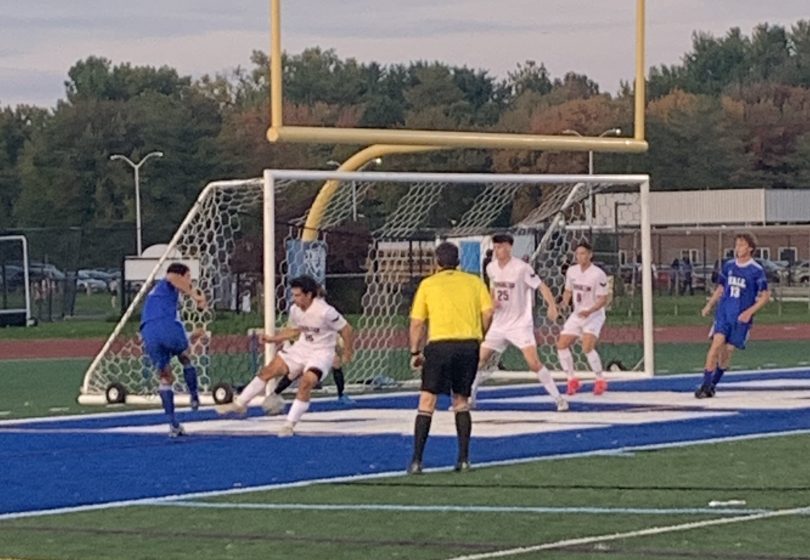 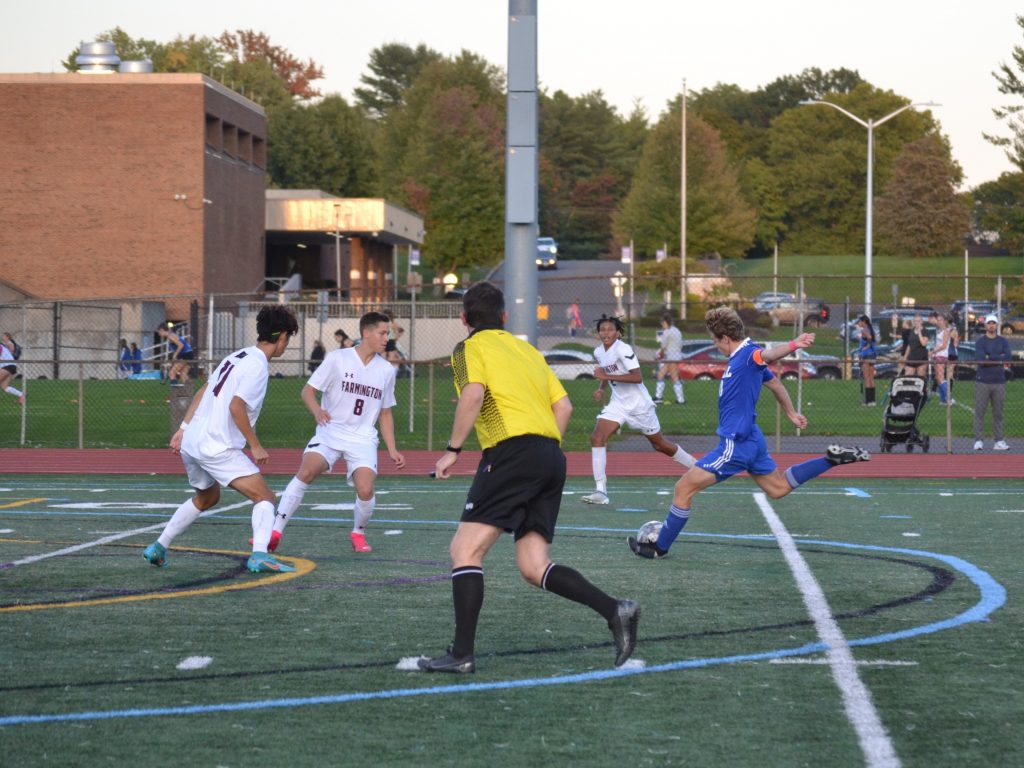 Lucas Almeida scored twice to help lead the Hall Titans to a 5-2 win over Farmington Thursday night in a boys soccer match. The two sides had played to a 1-all tie at Farmington on September 14 – the only time the 8-0-1 Titans did not get the “W” this season.

“If we’re going to do anything in states,” said Hall coach Zeke Seguro, “we have to have to play against great teams like Farmington.” The River Hawks are the defending Class LL Champions, and have dropped to 4-3-2, having won only once in their last five games.

The game – which was not part of the CCC West schedule – had everything coaches and fans expected. Each team had flashes of offense, some solid goaltending, and a lot of hard, physical play that showed just how much a win meant to each side.

Each had early chances to get on the scoreboard first. Just 6:45 in, Hall’s Lucas Almeida found Sam Sandler whose blast was knocked down by freshman goalie Dante Fierro. Sandler found the rebound, but his follow-up sailed over the crossbar.

The River Hawks had the better of play for the next few minutes but two good saves by Hall goalie Tyler Fairchild, and another that was stopped by a defender, kept it at 0-0. Just about halfway through the opening 40 minutes, Hall broke the ice when sophomore back Sullivan Clancy ran onto a long rebound off the right post and lashed a shot pat Fierro to give Hall the 1-0 lead. 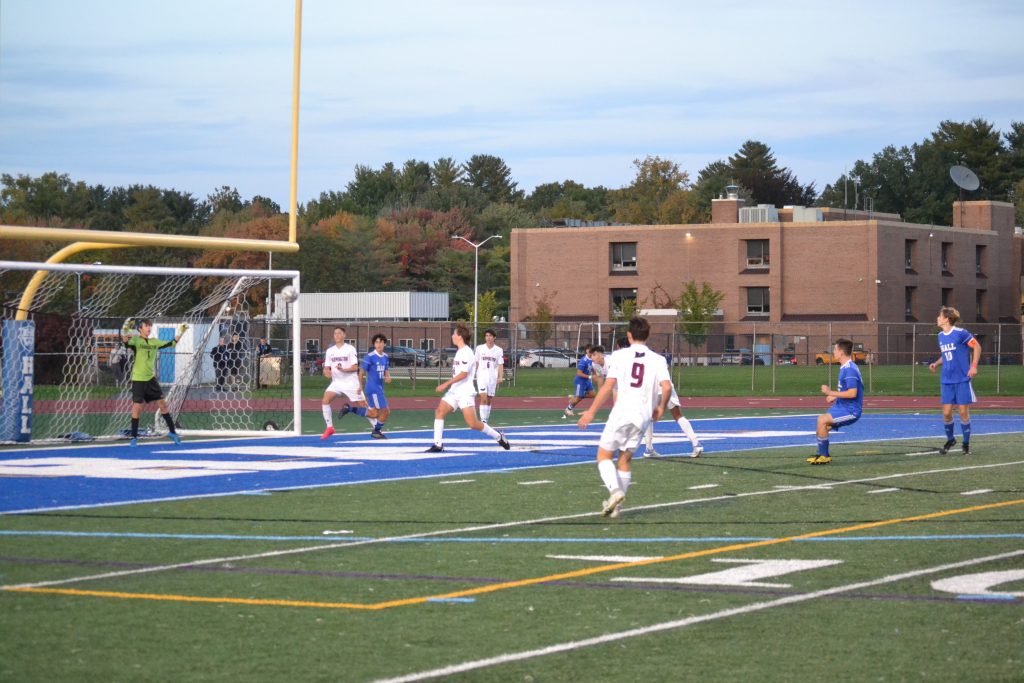 Sullivan Clancy’s shot heads for the back of the net for Hall’s first goal of the game. Hall vs. Farmington boys soccer. Oct. 6, 2022. Photo credit: Paul Palmer

The Titans continued the pressure with Almeida making some great runs showing not only his speed but also his ability to control the ball and beat defenders. With 6:26 to play, the UConn commit ran onto a long ball and from a sharp angle tucked it inside the far post to double the Hall lead.

“Lucas is so fast with the ball and sometimes it is like the ball is part of him,” Seguro said. “He has the ability to keep the ball on his feet. It is a gift.”

Almeida was not done though. Five minutes letter he collected a ball deep in the Farmington box, made one move, split two defenders, got himself an angle, and fired it past Fierro.

On the defensive end of the opening half, Fairchild was active and quick off his line, coming out to clear the ball and communicating with his defenders to keep a clean sheet. But Farmington knows what it takes to play against one of the top teams in the state, and the River Hawks came out ready to respond to Hall in the second half. Just 2:56 in they took some of the air out of the boisterous Hall crowd when they converted off a corner to cut the lead to 3-1. 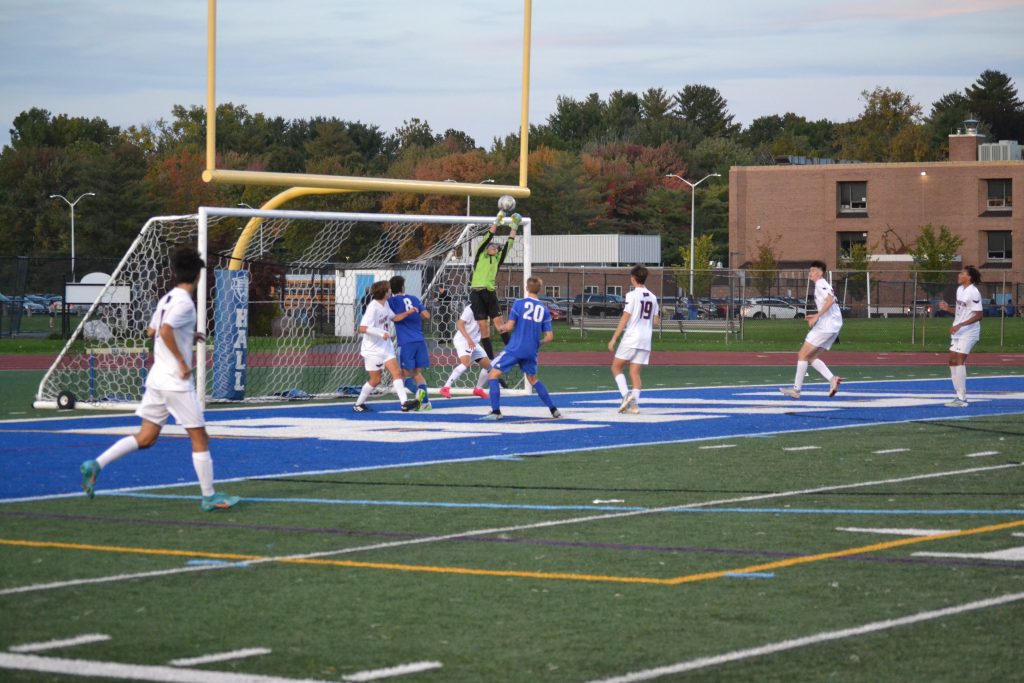 Both sides worked to control the midfield, looking to drop in through passes and  long balls and let their strikers outrun the defense. Heading toward the halfway point, it was Almeida and Sandler teaming up on a goal. Sandler, who is probably the only player on Hall that is faster than Almeida, raced down the right sideline to catch up to a long ball from Almeida. He drew the ball back past one defender and firing from about 12 yards out to the left of the goal, saw the ball bounce off players in front and land in the back of the net. Sandler was credited with the goal and Hall was back in front by 3.

“Sam is our engine that makes things go,” Seguro said of his senior player. Sandler’s speed was a factor in the game as he forced the Farmington defenders to race to catch up with him. “He [Sandler] covers a lot of ground and gets the ball to the correct players,” said his coach. 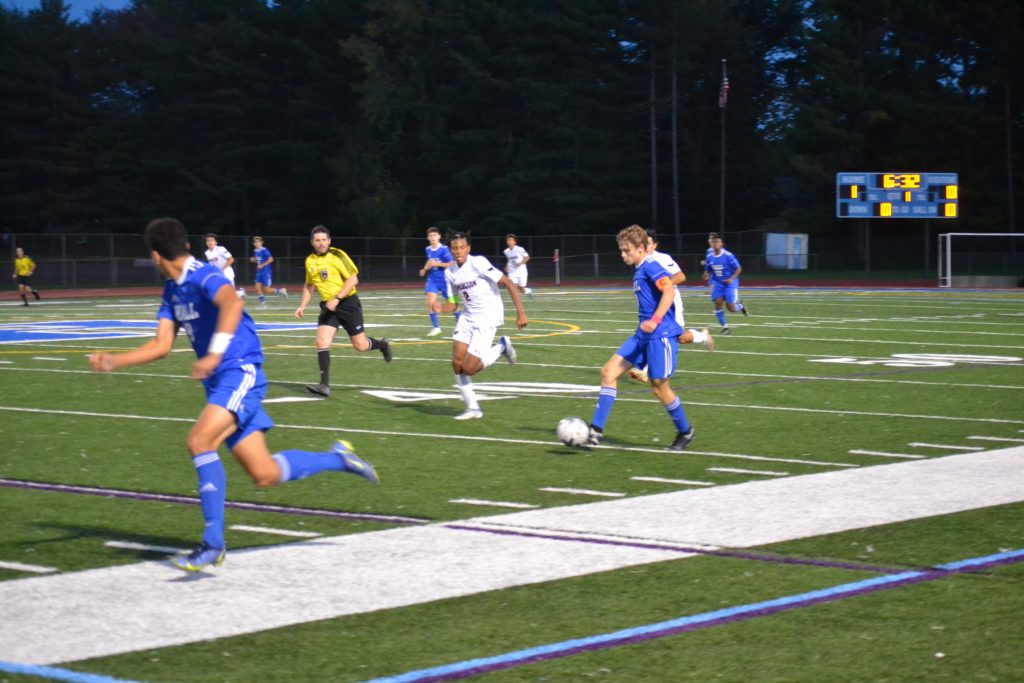 About 10 minutes later, Hall’s pressure would result in a fifth goal. Once again it was Almeida – who has stepped up his distribution game this season – setting things up. His long run towards the endline was stopped, but the ball came loose. An initial shot by Hall was deflected but Luis Bravo deflected the ball out of the air and into the goal. Once again, Farmington fought back, and two minutes later it was senior striker Oscar Pickett getting one back for his team with just under 15 minutes to play.

After the goal, Hall’s Fairchild and Farmington’s Miguel Bolanos Vasquez ended up in a pile trying to retrieve the ball out of the net. Once it was broken up, Bolanos Vasquez was given a yellow card.

It was the second time in the game that Fairchild and a Farmington player became entangled. Earlier it was Fairchild and a River Hawks player colliding as the Hall goalie went up for a high ball. Fairchild went down and had to be assisted by the trainers before coming off the field. No foul was called on the play as the officials determined both players were going for the ball. Fairchild returned to the field moments later to finish out the game.

Hall’s back line of Tommy Nash, Colin Fairchild, Jack DeLoreto, and Quinn LaRock were there in support of each other to take possession and clear the ball from danger. Seguro, who never passes up a chance to coach a player, was pleased with how his team performed in the first half but knows there are things they need to continue to work on.

“In the first half we played a whole lot better, with better focus,” he said. “ The game titled their way in the second half. It was too frantic. We are a work in progress,” he added.

As to the difference between the earlier 1-1 tie and Thursday’s 5-2 final, Seguro is not reading anything into it. “Both sides are better,” said the coach. “They will be there at the end. They are a great team.”

Hall will return to action on Tuesday when they host one-loss Newington. Also, on the horizon a home and home series with unbeaten Glastonbury on the 21st (away) and the 27th (home).