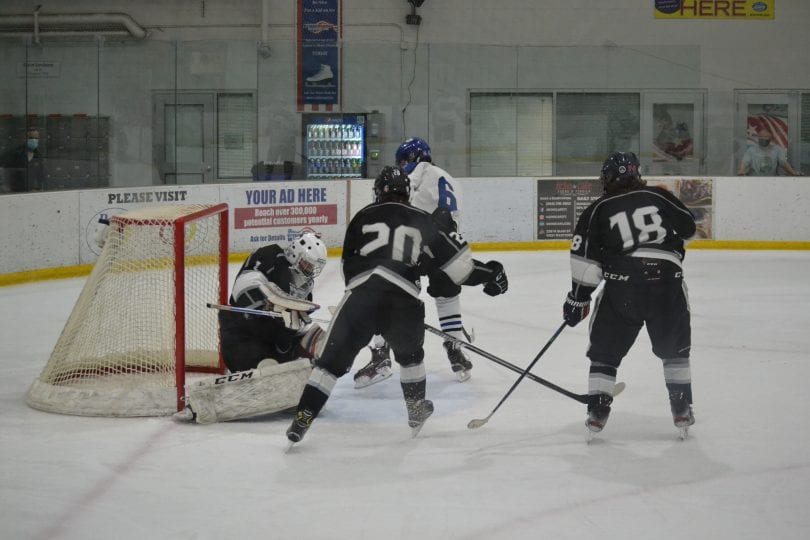 The Hall-Southington boys hockey team hosted Tri-Town Wednesday night in West Hartford, in what was the final game for the co-op that has existed for more than a decade. 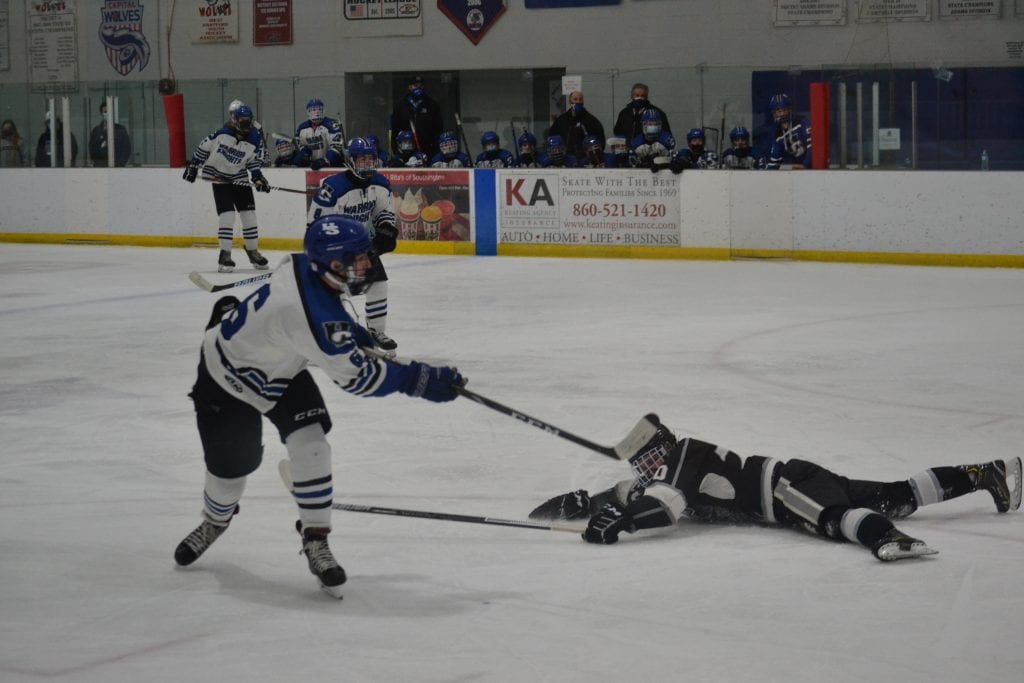 It was a familiar place for the Hall-Southington boy’s hockey team. For the fourth year in a row, they found themselves in the semifinals of the CCC South Tournament. For the fourth time in a row, the Warrior-Knights failed to secure their place in the finals, this time suffering a 3-1 loss to Tri-Town.

The game started about as well as coach Brian Cannon’s squad could have hoped. Just 1:16 into the first period, Colby Fortuna opened the game’s scoring on assists from right wing Sean Roach and center Duncan Hollander. Little did they know that would be the highwater mark in the game.

Tri-Town, which lost to Hall-Southington 5-2 on March 17, was content to be a counter puncher, absorbing the rushes from the hosts and taking their chances when they came along on turnovers and breakout passing.

“Part of the problem was early in the game, we kept turning it over, creating havoc,” said Cannon. “We had an off night when it came to execution and they made fewer mistakes,” he added.

Both sides would have their chances to add to the score in the first. Tri-Town’s Gavin Rauza saw his scoring chance sail over the bar on goalie Noah Behrens-Gould’s glove side. Minutes later, Hall-Southington’s James Lynch and Fortuna had good chances that were stopped by the TerrorCats’ goalie Reave Stafford. With just over 6 minutes to play, a bad clear by a Hall defender led to Kyle Provencher’s slapper from the point beating Behrens-Gould to tie things up. “We are opportunistic,” said the TerrorCats head coach Kyle Fljalkowski.

The Warrior-Knights found themselves back on their heels in the closing minute-plus of the first. Tri-Town kept the puck in the attacking zone for the final 1:15, constantly thwarting Hall-Southington’s clearing attempts and forcing Behrens-Gould to be sharp.

Whatever Cannon told his team in the intermission must have worked, as they came out in the second period and dominated play from the first faceoff. 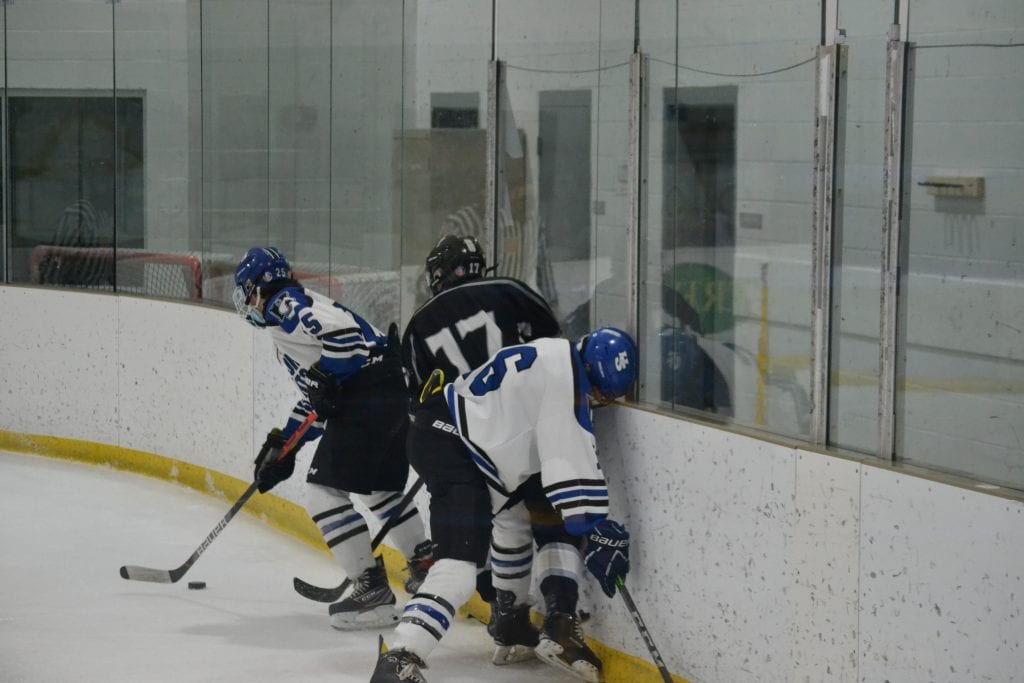 Right wing Sean Roach – who seemed to be on the ice for the entire 15 minutes of the second period – and Fortuna had their goal scoring attempts shut down by Stafford about 20 seconds apart. Four minutes in, the Warrior-Knights had perhaps their best chance to take the lead back when Duncan Hollander found his brother Hudson alone in front of Stafford’s net. The brother-to-brother play was again shutdown by the junior goalie. “We have one of the better goalies in the entire state,” said Tri-Town’s coach of his netminder.

Tri-Town never panicked no matter how much pressure Hall-Southington put on them. Stafford seemed to grow more confident with each save. About halfway through the second, the TerrorCats would once again counterpunch, and this time take the lead.

Lazaros Vasilladis stepped in front of a shot attempt by Roach, the puck deflected off Vasilladis’ shinpads and out into the neutral zone with the 2 players in pursuit. Vasilladis won the foot race and found the back of the net to give Tri-Town a lead they would never give up.

With their season coming down the how they played in the final 15 minutes, Hall-Southington started the third down a man as a penalty taken with under a minute to go in the second carried over. They would kill off the man-down situation and begin working on tying things back up.

Ethan Stagg had one of the better chances when his low shot from the point was stopped and covered by Stafford just after the penalty time expired. For Tri-Town the game plan was simple: get in the way of any scoring chances, and when they got the puck dump it to the other end and take the icing face-off. “We work really hard on face-offs and did a better job closing them out,” said Fljalkowski.

The game would come down to a power play situation late in the third. Tri-Town defenseman Josh Roy was whistled for tripping with 1:33 left in regulation and his team up 2-1. A timeout was called and both teams planned for what came next.

Hall-Southington chose not to pull its goalie until under 1 minute to go. With just 29.5 seconds to go, Tri-Town managed to clear the puck from their defensive zone and Vinnie Rumore managed to outrace the Warrior-Knight players to knock in the empty netter.

Wednesday night’s game was not only the final game of the season for the Warrior-Knights, but it marked the end of the Hall-Southington co-0p boy’s hockey team. Together since the 2008-09 season, Hall will field its own team next season, while the plans for Southington’s team have not been finalized. 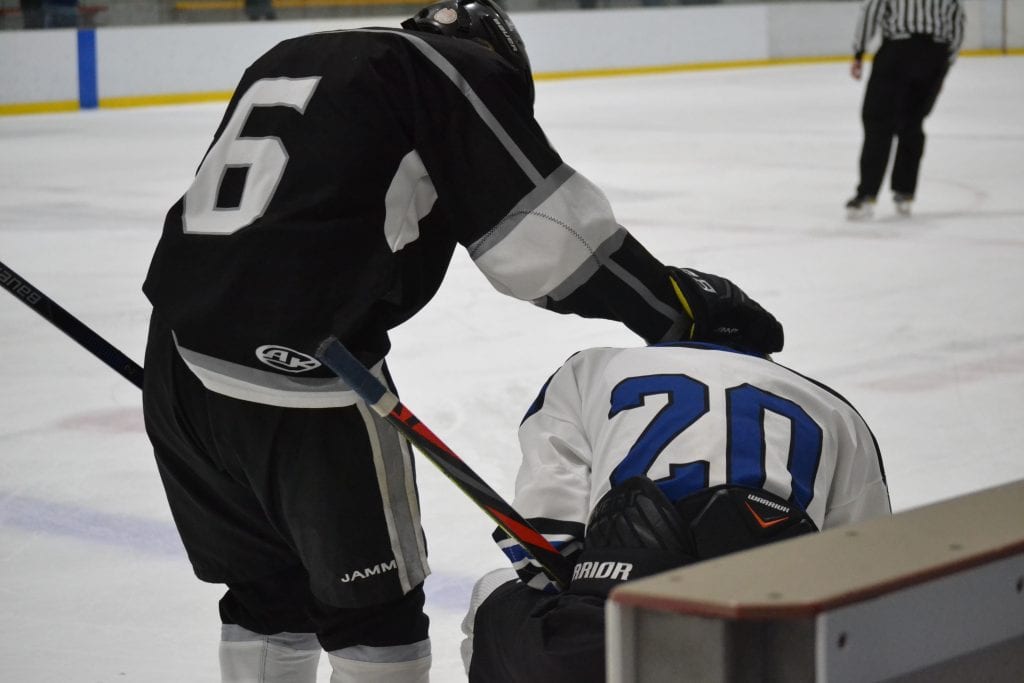