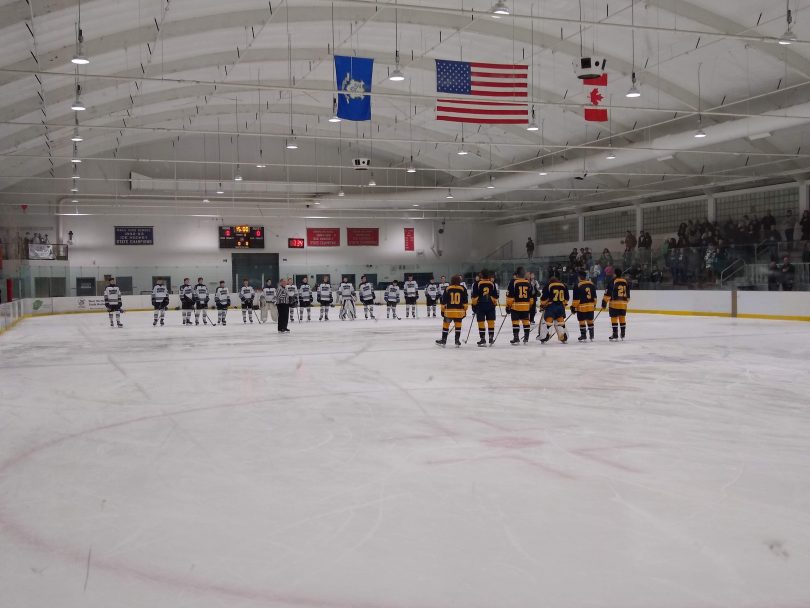 With contributions from four different goal scorers, Hall-Southington fends off East Haven to improve to 7-2, matching its best start since 2015-16.

The Warrior-Knights (7-2) took a 3-0 lead in the first period, but the Yellowjackets (3-5) scored twice in the second period to make it 3-2 entering the third.

Duncan Hollander found Sean Roach in the slot for the eventual game-winning power-play goal, making it 4-2 with over 11 minutes left in the third period.

Alec Speirs scored on the power play for East Haven with 1:32 remaining. The Yellowjackets tried to pull their goalie with one minute left, but the Warrior-Knights prevented clean offensive zone entries to delay East Haven sending out an extra skater in the closing moments.

“I was very happy with our first period,” said Hall-Southington head coach Brian Cannon. “We came out roaring. We moved the puck fast. We were really stifling them on the forecheck. … That’s the way we wanted to play them for three periods, and then the second period happened. We started waiting for them, trying to react to what they were doing. … We kinda let them back in the game.

“[In the] third period, we were better. We weren’t great, but we played more of it in their end. We were doing a little bit better getting to the puck, but it turned into a close game – too close for my comfort.”

Colby Fortuna scored first to put Hall-Southington on the board with 6:26 left in the first period. Skating through the slot, Cameron Perez tallied the Warrior-Knights’ second goal at the 5:19 mark.

🎥: Matthew Weir flips the puck into the net while falling down to put Hall-Southington ahead 3-0 with 45 seconds left in the first period. #WeHa #cthk pic.twitter.com/UqsRKVART2

Matthew Weir flipped the puck over the East Haven goalie while falling to put Hall-Southington up 3-0 with 45 seconds left.

Speirs put the Yellowjackets on the board less than two minutes into the second period, cutting the margin to 3-1. The Warrior-Knights killed two consecutive penalties, but Duncan Rider scored just after East Haven’s second power play expired to make it 3-2 with 5:29 left.

Off to their best nine-game start since 2015-16, Cannon said he wants to see the Warrior-Knights maintain dominant play throughout entire games as the season continues.

“If we can play like we did in the first period with consistency, I’d be happy,” he said. “What I’ve seen is we’ve put together, maybe, three periods at that level: two against Suffield early on – we scored nine goals in two periods – and we scored three goals in [this] first period and really controlled all the play. That’s where I want to see the team with consistency.”

Hall-Southington will take on undefeated (9-0) WMRP – the Wethersfield/Middletown/Rocky Hill/Plainville Co-op – at Newington Ice Arena on Feb. 5 at 7 p.m.