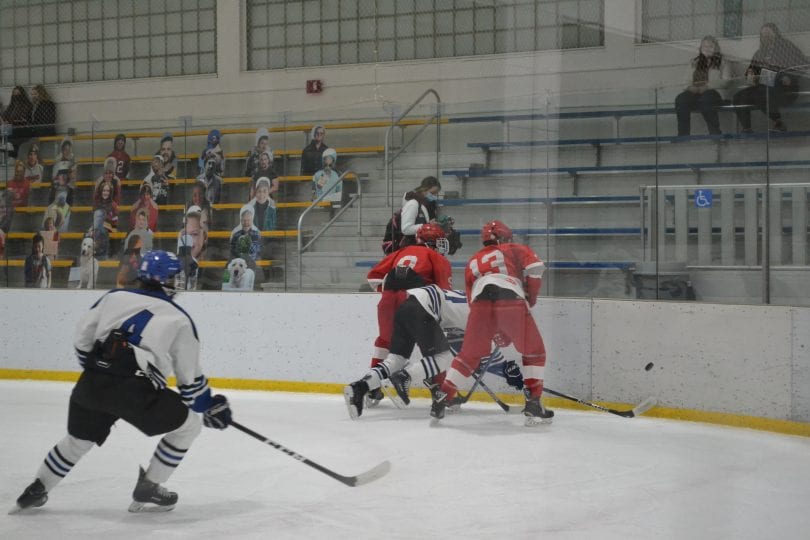 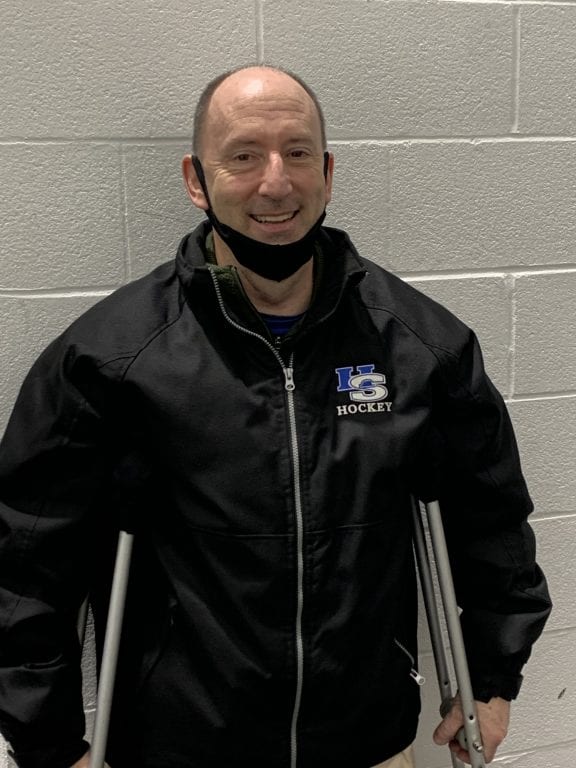 Leave it to Mark Twain – who moved to Hartford in 1871 – to perfectly sum up the Hall/Southington-Conard boys hockey rivalry. Said Twain: “Familiarity breeds contempt,” and meeting for the second time in a week, these two teams lived up to Twain’s prophecy.

In a game with lots of big hits, and a handful of penalties, the Warrior-Knights used another strong game in goal from Noah Behrens-Gould in a 4-1 win over the Chieftains Monday night.

Hall/Southington came out with a bit more jump in their game than Conard, but strong defense by Gavin McGowan and goalie Graydon Selstad kept the game scoreless. At 4:24 into the period, the Warrior-Knights pressure paid off when Colby Fortuna took a feed from Adam Ezorvski and his shot from in tight found the back of the net for the 1-0 lead. 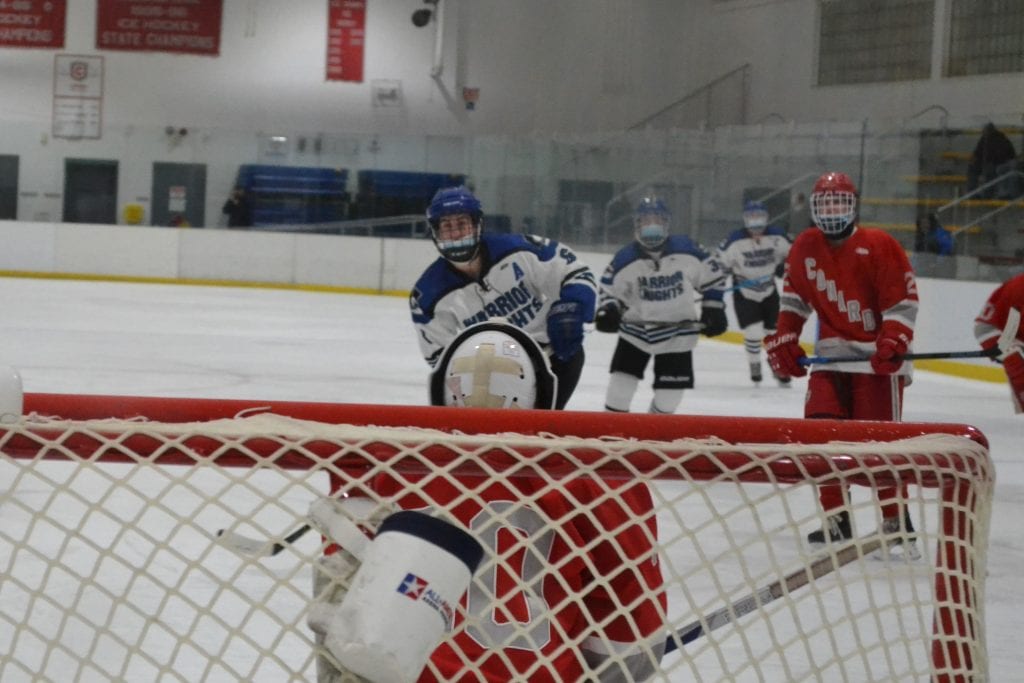 Ninety seconds later, Selstad made a strong save after Hall/Southington’s Sean Roach took the puck away from a Conard defender behind the net and found James Lynch in front for a good scoring chance.

Conard coach Jason Olson was not happy with the way his team came out in the rivalry game. “We were not ready to play. We came out flat and made a lot of early mistakes,” Olson said.

With just over 10 minutes gone in the first period, Hall went on the power play and maintained zone pressure for most of the two minutes. Selstad again was strong, in particular with a pair of blocker saves off Hall/Southington’s Drew Nafis and Cody Brew.

Conard outshot the hosts 11-7 in the first but trailed by 1 at the break.

Hall/Southington would double its lead just 2:10 into the second period when Owen Miller dug the puck out from behind the Conard net and beat Selstad down low. Just over three-and-a-half minutes later, it was Sean Roach forcing the turnover at the blue line before snapping off a wrister that would put the Warrior-Knights up 3-0. 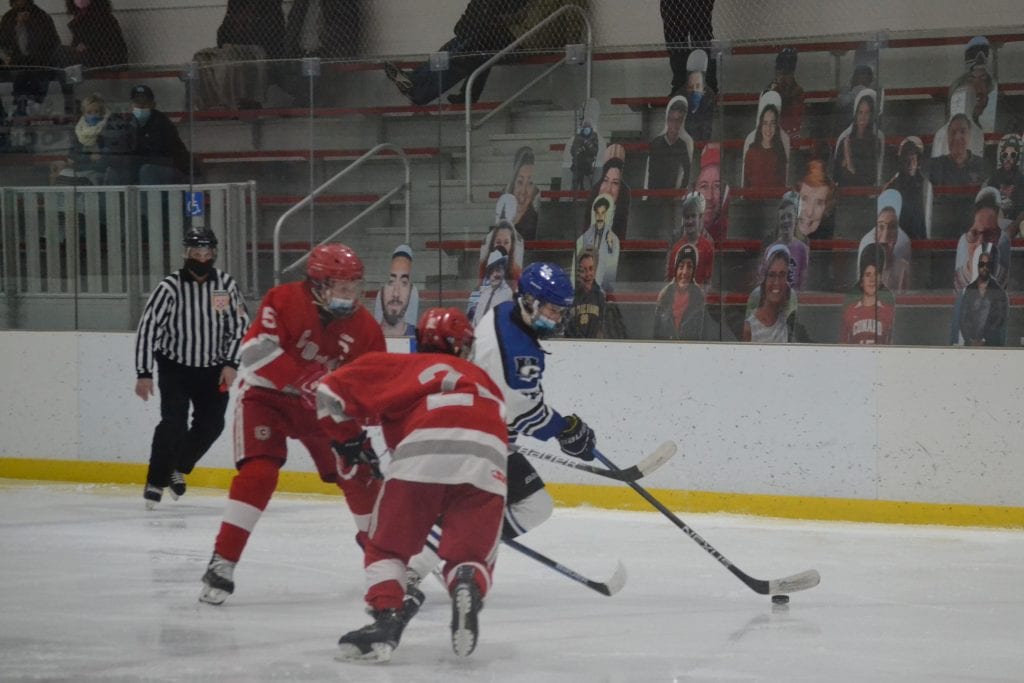 The game turned very physical after the goal by Roach as both teams threw big hits and finished their checks.

Conard had a golden scoring opportunity with 3:04 left in the period when Sam Heller and Jack Hodgson came in on the Hall/Southington goal in a 2-on-1, but Behrens-Gould was again up to the task and stopped the shot.

The hard-hitting continued, and near the end of the period, Conard lost captain Jacob Caron to an injury. The Chieftains’ best scoring chance of the game came as the second period would down. A Hall/Southington defender tripped at the blue line and Conard’s leading scorer Owen McGoldrick picked up the loose puck and went in one-one-one with Behrens-Gould. 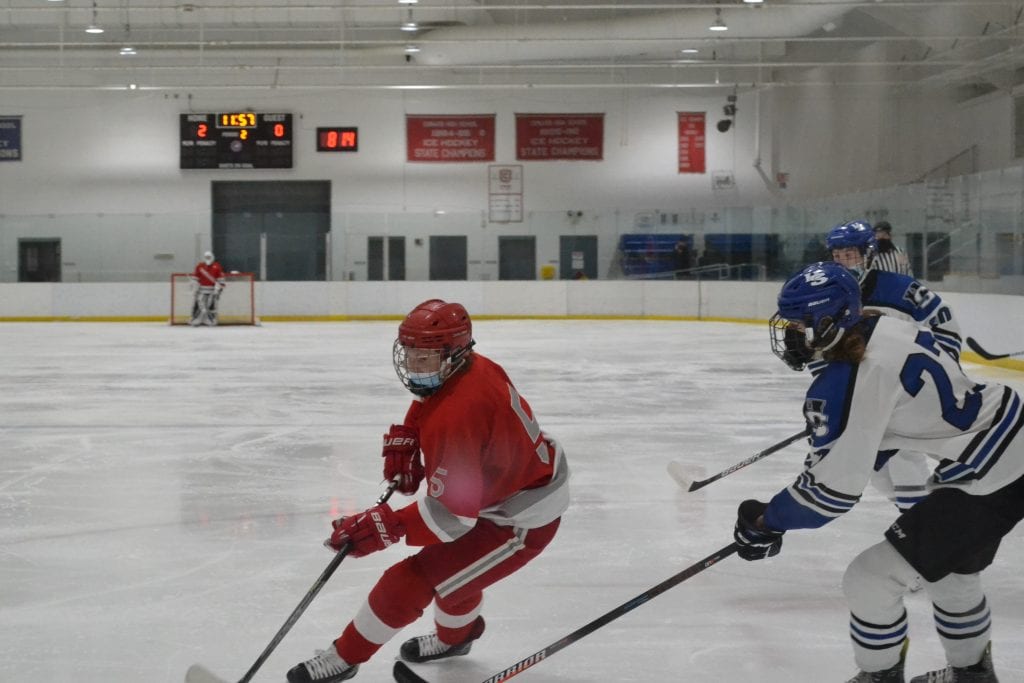 McGoldrick went high stick side, but Behrens-Gould was up to the task, blocking the shot over the net as time expired. “We played a little more physical,” said Hall/Southington coach Brian Cannon. “We have been playing too soft so far.”

The two teams would trade power plays in the third, as the hitting slowed down but the shots picked up. Both Selstad (26 shots/22 saves) and Behrens-Gould (33 shots/32 saves) came up big for their teams.

Trailing by 3 with 3:07 to go in the game, Olson pulled his goalie to get the extra skater on the ice. The move paid off 18 seconds later when Hall/Southington failed to clear the puck and defenseman Harrison Sweeney’s high wrist shot found its way through traffic and past the Hall/Southing goalie.

But about 1 minute later Hall/Southington’s James Lynch found Nafis along the boards near center ice, and Nafis would score the empty netter to make it a 4-1 final. 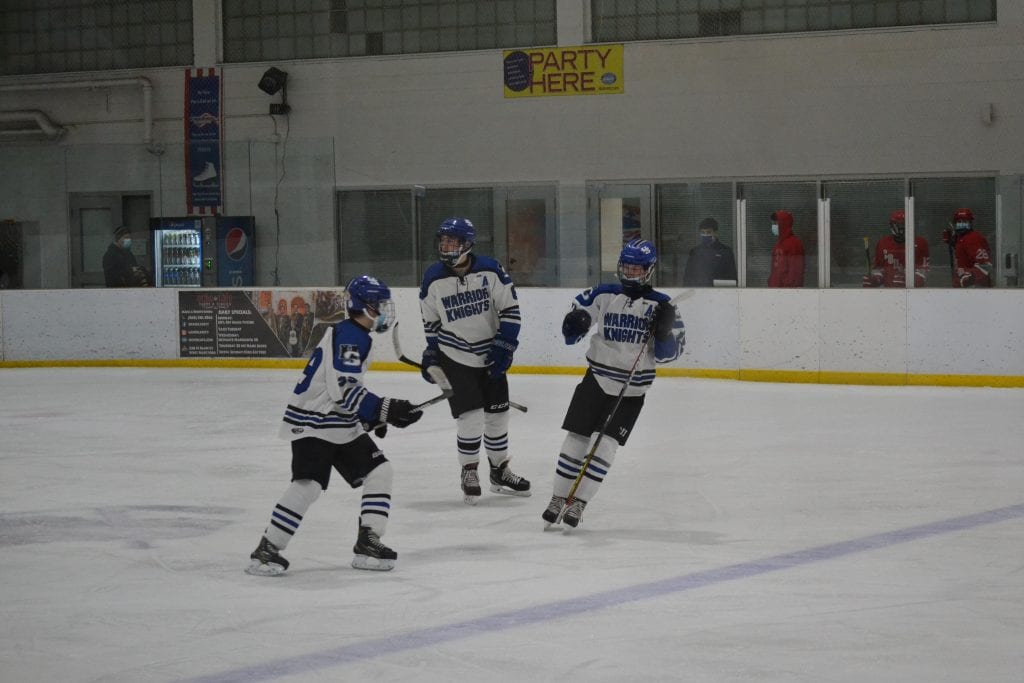 Despite the loss, Conard’s Olson sees the progress his team is making each game. “I think we’re close,” he said. “I was happy with the early wins we had this year, but we still have flashes of the old team without that winning mentality.”

The win, combined with Hall/Southington’s victory last Monday, marks the first time that the Warrior-Knights have swept the season series with their crosstown rivals.

The win also was No. 100 for head coach Brian Cannon with the program. “We took care of the puck,” said Cannon after the game. “We created opportunities in their end.”

Both teams are back in action on Wednesday with Hall-Southington taking on Newington, while Conard travels to Wethersfield. 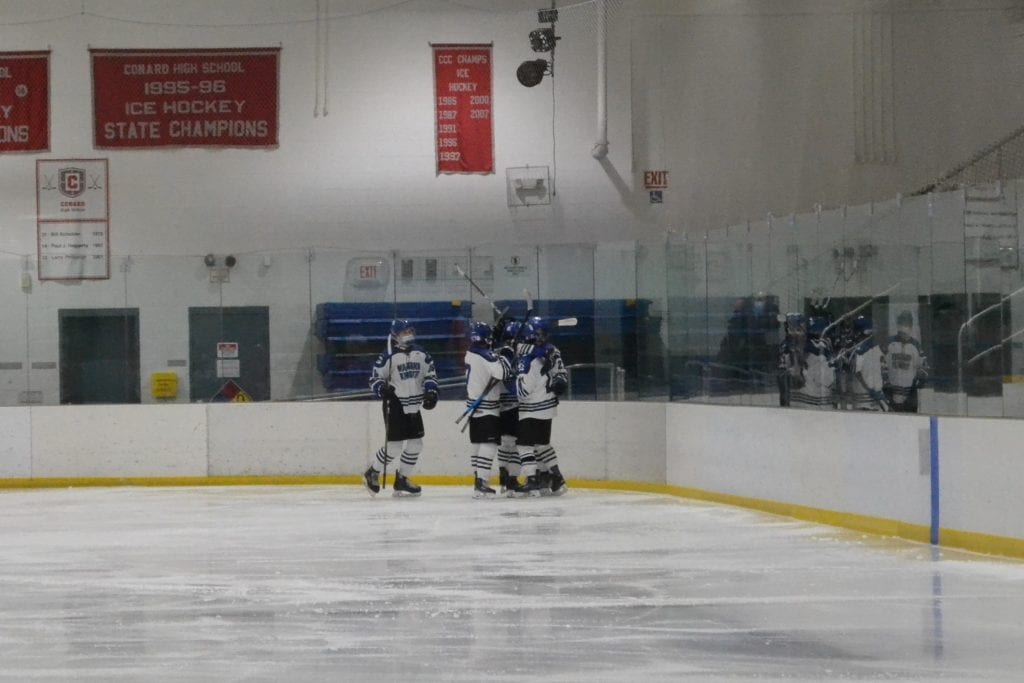