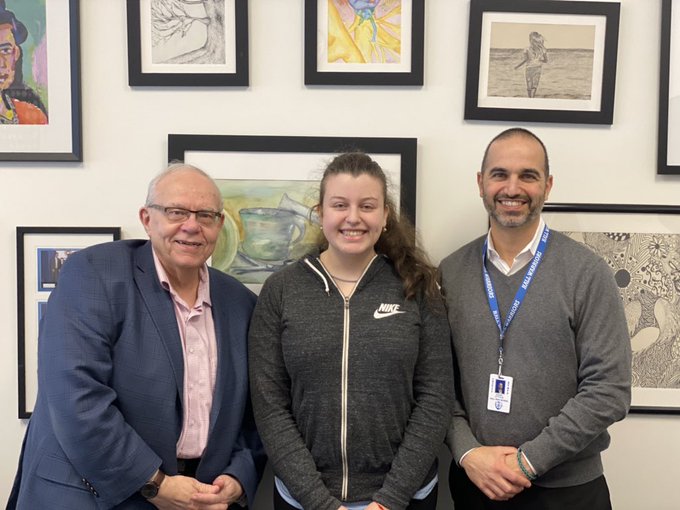 Nina Grace Faynshtayn, a senior at West Hartford’s Hall High School, has been chosen to represent the state at a program in Washington, DC, this March.

Hall High School senior Nina Grace Faynshtayn has been selected as one of only two students to represent Connecticut and one of 104 delegates nationally at the 58th annual United States Senate Youth Program (USSYP) – an educational program for outstanding high school students.

She will join Sen. Richard Blumenthal and Sen. Christ Murphy at the program, to be held in Washington, DC, from March 7-14.

As part of the honor, Faynshtayn will also receive a $10,000 college scholarship to be used for her undergraduate education.

In addition, Faynshtayn has served on the U.S. Congressional Youth Cabinet organized by Congressman John Larson, and has been involved with advocacy organizations that represent Ukrainian-Americans. She also previously served as national editor- in-chief of The Progressive Teen magazine, the official publication of the High School Democrats of America.

This is the second year in a row that a Hall High School student has been selected for the program. Last year, Megan Striff-Cave spent a week in Washington as part of the USSYP program.

Mariam Mangey Khan, a senior at Hamden High School, will serve as Connecticut’s other delegate. Logan Michael Williams of Bristol (Bristol Central High School) and Wendy Zhang of Woodbridge (Amity Regional High School) were chosen as alternates for the 2020 program.

The USSYP was founded in 1962 through Senate Resolution 324 and each year two of the highest-achieving students from each state, the District of Columbia, and the Department of Defense Education Activity are selected for the week-long program through an extremely competitive merit-based selection process held at the state departments of education. The goal of the program, as stated in a news release, is “to increase young Americans’ understanding of the interrelationships of the three branches of government, learn the caliber and responsibilities of federally elected and appointed officials, and emphasize the vital importance of democratic decision making not only for America but for people around the world.”

Transportation and all expenses, as well as the $10,000 scholarship, are provided by the Hearst Foundations and no government funds are used for the program.

Student delegates will participate in meetings with senators and members of the House of Representatives, Congressional staff, the president, cabinet leaders, an ambassador to the U.S., a justice of the U.S. Supreme Court, and members of the national media.

More information about the program can be found on the website www.ussenateyouth.org.