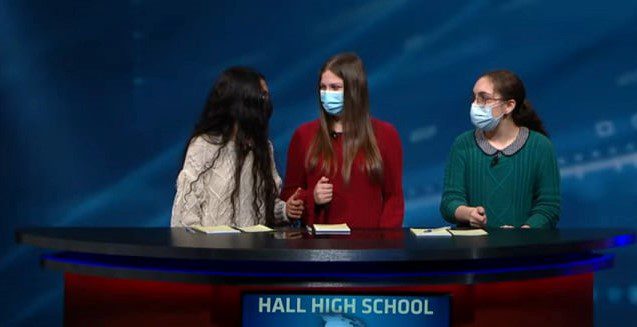 Students from West Hartford’s Hall High School recorded an episode of ‘As Schools Match Wits’ that will air in the spring of 2022.

A team of three students from West Hartford’s Hall High School competed at Westfield State University over the weekend, taking on a team from Chicopee High School in WGBY’s “As Schools Match Wits.”

The quiz bowl competition – a battle of intelligence and quick thinking that takes place annually among high schools in western New England – is now in its 61st year.

“Unlike last year, our students were finally able to compete all together in the studio instead of in separate classrooms,” said Hall math teacher Christina Hunter, who coaches the team along with Latin teacher Jim Crabb.

Hunter said the Hall team had an “amazing performance,” but it won’t be known for some time whether or not they will move on to the finals, which this year includes only the top four scoring teams, rather than eight teams as in the past. She’s got her fingers crossed, she added.