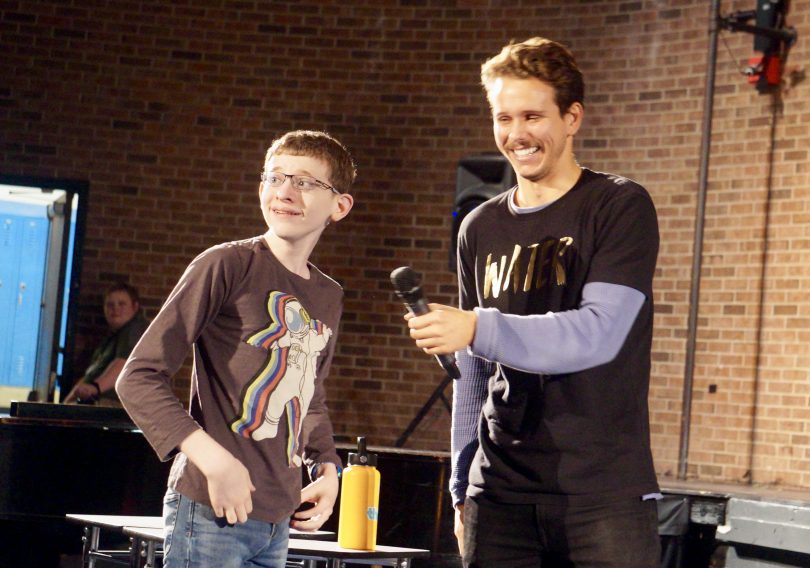 Kellen Brewer of the Thirst Project with a Hall student who volunteered to carry a 5-gallon container of water to see how heavy it is. Photo credit: Ronni Newton

A representative of the Thirst Project spoke to students at West Hartford’s Hall High School Tuesday, kicking off the Human Rights Day initiative to help end the global water crisis. 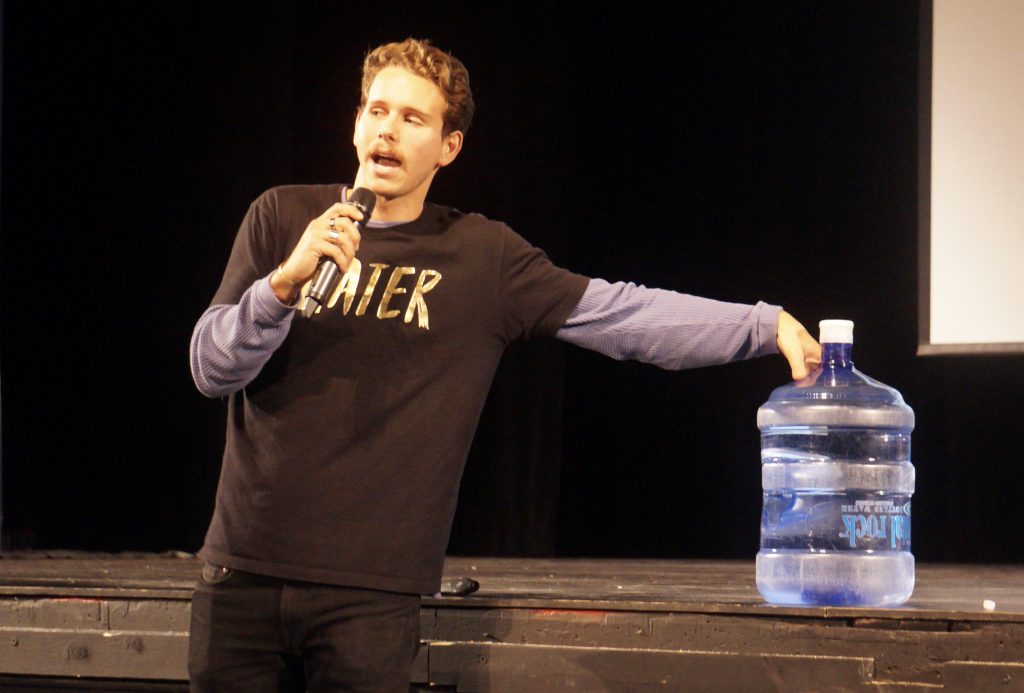 Kellen Brewer of the Thirst Project points to a 5-gallon container of water, which he informed Hall students is only as much water as people in some parts of the world have for an entire day – and it’s often contaminated. Photo credit: Ronni Newton

Tuesday was International Human Rights Day, and students at West Hartford’s Hall High School celebrated the day by launching a fundraiser to help end the global water crisis, with the goal of raising $12,000 to completely finance a well and transform a community.

Led by students in the Human Rights class, Hall will be participating in the Thirst Project, raising money to build wells, specifically in the Kingdom of Eswatini (formerly known as Swaziland), which is located in southern Africa. 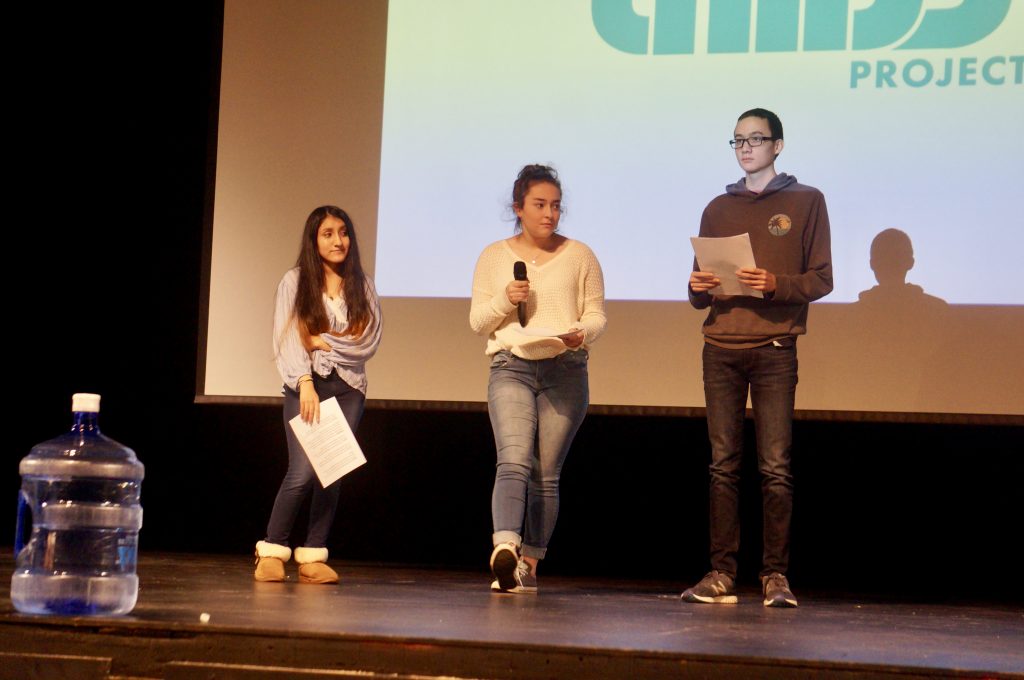 Kellen Brewer, student activation coordinator with the Los Angeles-based Thirst Project, hosted two presentations to reach the entire Hall student body Tuesday morning. The information he provided came as a surprise to many in the engaged audience.

During a 40-minute assembly, Brewer told the students that the Thirst Project is committed to ending the global water crisis – a crisis which has ramifications that impact health, education, the economy, and much more. While the Thirst Project can’t solve the entire problem – 663 million people worldwide still lack access to safe, clean drinking water – the organization is currently serving 330,000 people in 13 different countries.

“When I was in high school I felt like people thought apathy was cool,” Brewer, 24, told the students. That’s not the case today.

“Water is one of the most important things you need to survive,” he said. Along with food and oxygen, it’s a fundamental need. “Clean water, the fact that it’s not accessible all over our planet, is not okay,” said Brewer.

Brewer told the students that he grew up in Tuscon, AZ, and although he stayed in state to attend college for financial reasons (Arizona State in Tempe), he was eager to expand his horizons to the rest of the world.

An opportunity to study abroad in Spain, which happened to coincide with the height of the Syrian refugee crisis, opened his eyes, Brewer said. While he traveled for fun, “I was seeing so many people who were victims of circumstance.”

Brewer told the students he said to himself, “The next time I travel I want to be sure there’s purpose and meaning behind it.” That thought led to his internship with the Thirst Project, an organization that had done a presentation to his high school years earlier.

As an intern, and now as an employee, “We are raising awareness of something a lot of us don’t even know exist,” Brewer said.

He shared statistics with the students (see PDF below), as well as perspective that in the age of smartphones with so much information at people’s fingertips, “We still live on a planet where more than 600 million people don’t have basic access to clean, safe drinking water.”

Pointing to a 5-gallon jug on the stage, Brewer said that’s the total amount of water many people have to use in a day – for drinking, washing, cooking. He asked the students how much water the average American uses in a day – and guesses ranged from 10 to 40, to 70 gallons – and then told them that the number is more than 100, “versus 5 gallons of contaminated water” that’s all people in some parts of the world have access to.

The number of children who die every day from a water-related illness is staggering, Brewer said, the equivalent number to a jumbo jet crashing every 90 minutes, every day.  “How often do we ever see anything about the global water crisis on the news?” he asked.

He showed the students photos of people – mostly women and children –  collecting buckets and 5-gallon jerry cans of brown water, from sources that are also shared by animals, contaminated by feces and parasites that can lead to dangerous diseases like schistosomiasis, as well as cholera or dysentery. 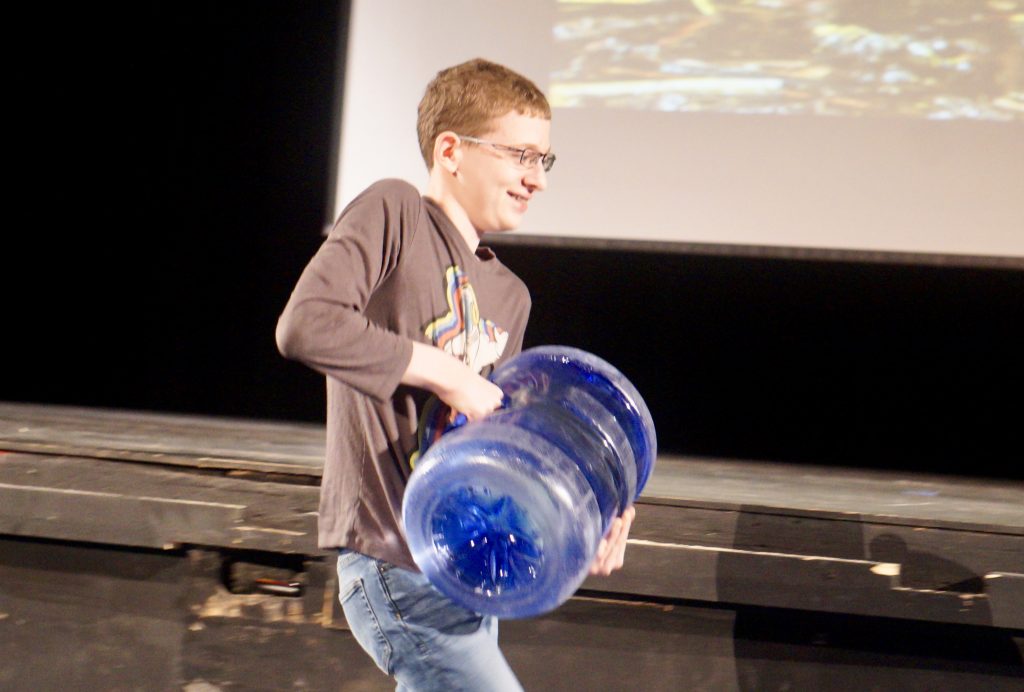 Jordan, a Hall student, said the 5-gallon container of water, which weighs about 44 pounds, was very heavy. In some parts of the world women and children carry jerry cans of that size an average of 3.75 miles per day just to have some kind of water. Photo credit: Ronni Newton

While water sources are a problem, so is the process of collecting the water, Brewer said. Jordan, a student who volunteered, strained as he carried the 5-gallon jug across the auditorium. He was surprised when Brewer told him it weighed roughly 44 pounds.

Every day, women and children around the world struggle to carry water from sources that are on average a 3.75-mile round trip. “Imagine if that was a daily task, and imagine if you were malnourished, or barefoot,” Brewer said. It can take 6-8 hours of the day just to get water – that’s not even clean.

Brewer also shared some success stories, showing a photo of a woman he identified as Juliet. She didn’t have to walk as far for water as some do – just the length of two football fields – but she was caring for eight orphaned children. When the Thirst Project brought clean, safe water to her village, the difference was remarkable. 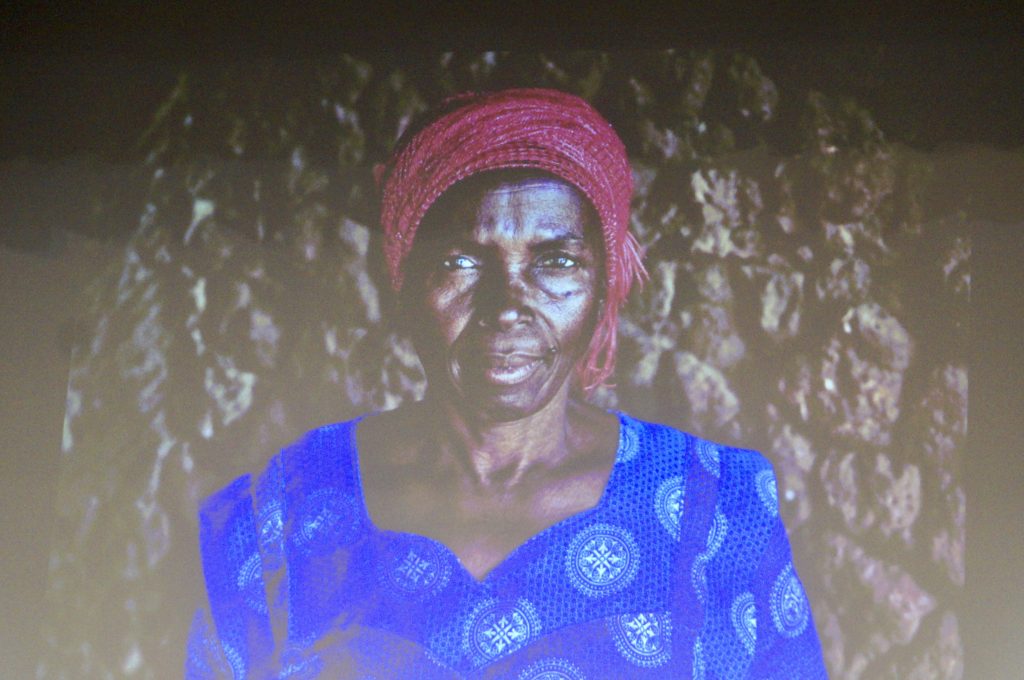 Kellen Brewer of the Thirst Project showed a photo of “Juliet,” who is one of the organization’s success stories. Photo credit: Ronni Newton

The solution the Thirst Project offers involves hiring local drillers to drill down about 200 feet to connect to the aquifer, and then installing a hand pups that delivers clean, fresh water. Almost overnight, disease rates and child mortality drop by 80-90 percent.

The organization was started by a group of 19-year-olds in 2008, who realized the impact that young people could have. It’s board funds all of the administrative expenses, and 100 percent of the funds raised go to creating water sources.

Schools that raise enough to fully fund a well will be connected directly with that community, and will receive a personalized video showing the impact of their donation.

“Young people are really the agents of social change,” Brewer said, and he believes the global water crisis can solved.

“Although we may be young, we as young people see the world not as what it is, but what it can be,” said Brewer.

Brewer will serve as a resource to the Hall students, educating them and providing whatever they need to make the fundraiser successful.

Hall’s Human Rights class shared the following message about the Thirst Project with the school community: “We want to help raise money to help build wells all over the world in places where people do not have access to clean drinking water. It only costs $12,000 to build a well and provide water to a whole community for decades. As a school lets try to raise $12,000 dollars to change a community forever, improve sanitation, medical care, and access to education. If all 1,600 people in this building donate what they can OR get involved in another way like raising awareness, we can make this happen!”

For more information about how to assist the Hall students, click here for their fundraising page.  the Thirst Project, click here.

For more information about the Thirst Project, visit their website.