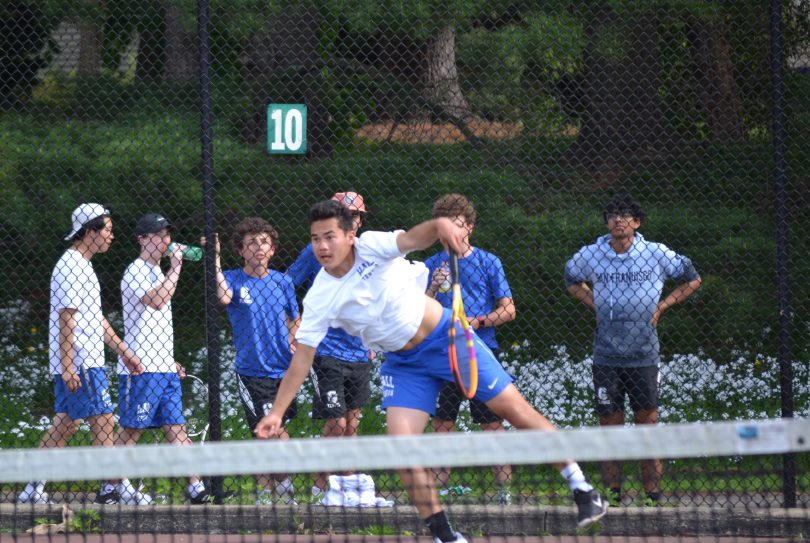 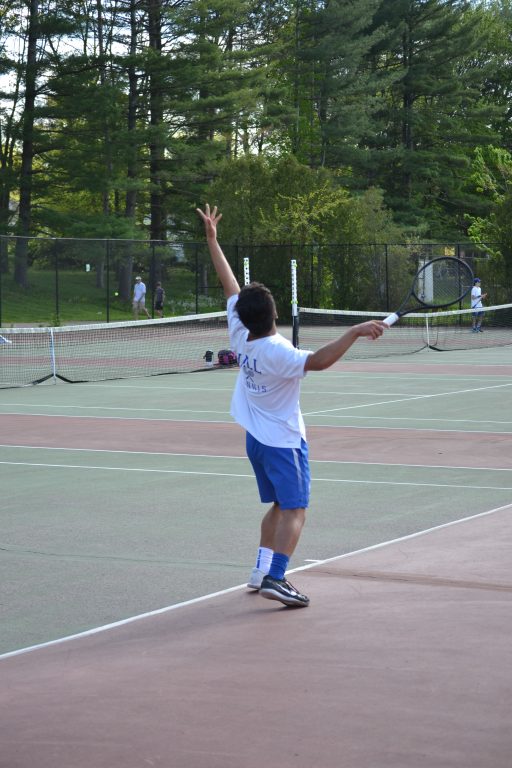 Entering Friday there were just five undefeated boys high school tennis teams in Connecticut. By the end of the day, at least one of them would be savoring its first defeat, as 10-0 Glastonbury met 12-0 Hall.

In a match that lived up to the billing, the Guardians took the victory when their No. 2 doubles team closed out 7-5, 6-2 win over Hall’s No. 2.

“We anticipated an evenly-contested match,” said long-time Hall head coach Jim Solomon. Under a blistering sun, on Friday the 13th, each side put on a great show. Hall’s No. 1 singles player, Nicholas Hermes, cruised to a 6-0, 6-0 straight set win over Joseph Chan in a battle of freshman. “Mentally I was focused today,” Hermes said. “I thought I served really well. This was a big match and I just wanted to come out and win.” 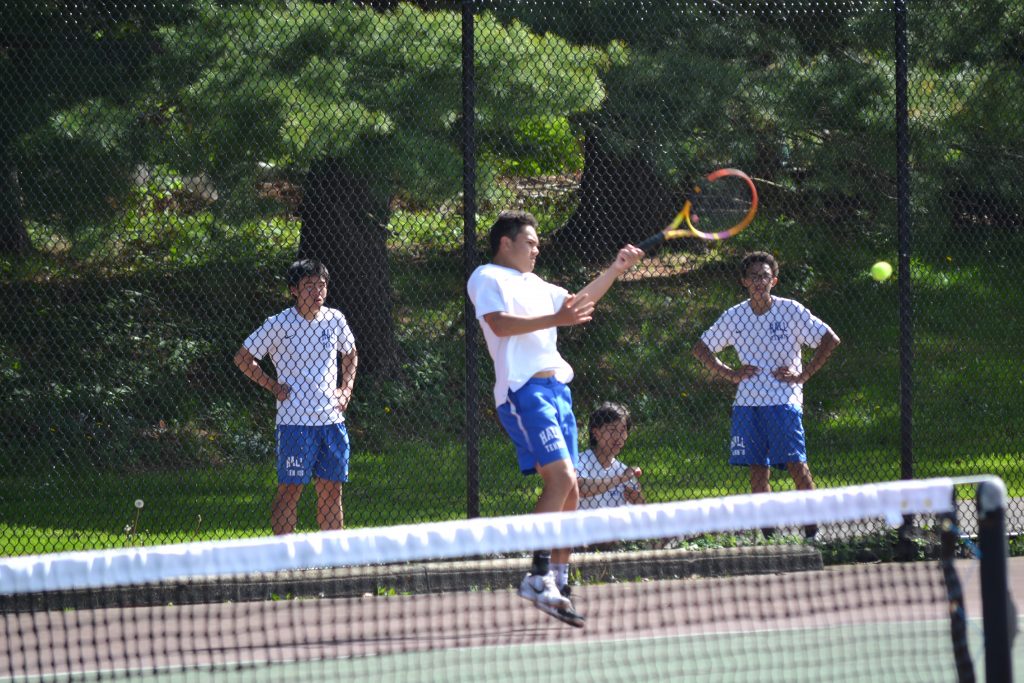 Playing on the court beside Nicholas was his older brother, Brandon, who won his matchup with Andrew Risinger, 6-0, 6-2 to stake the Warriors to a quick 2-0 lead. The brothers are a dynamic 1-2 punch for Solomon and even share tennis shoes and socks. “Our dad bought two sets of them and we didn’t know it. We said we should alternate,” said Nicholas. So, each wears one white shoe and one black, as well as one white sock and one black sock.

“They are a wonderful, positive family,” said Solomon. 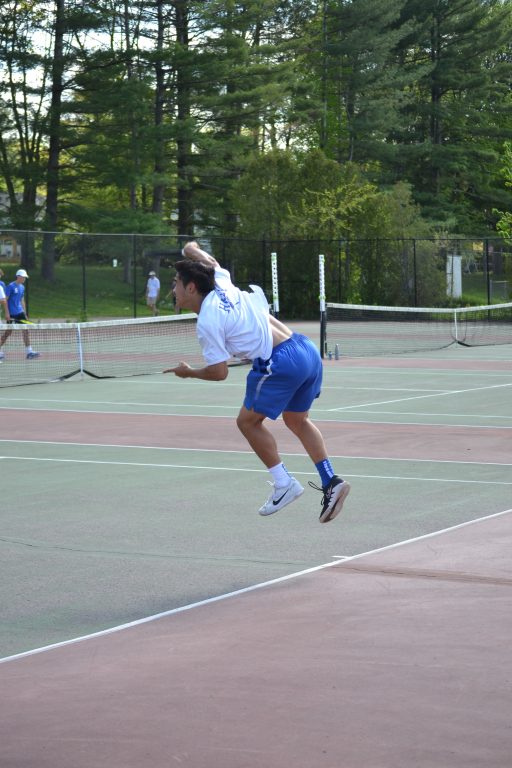 Freshman and No. 1 singles player Nicholas Hermes puts it all into his serve. Hall vs. Glastonbury boys tennis. May 13, 2022. Photo credit: Paul Palmer

Glastonbury was playing without one of its top singles players due to a health issue, and the third and fourth singles matches each went to tie breaks. Josh Souder of Glastonbury won a long, hard fought number 3 singles matchup with Hall’s Jeremy Eisen, 6-2, 3-6, 6-10, in a tiebreak. 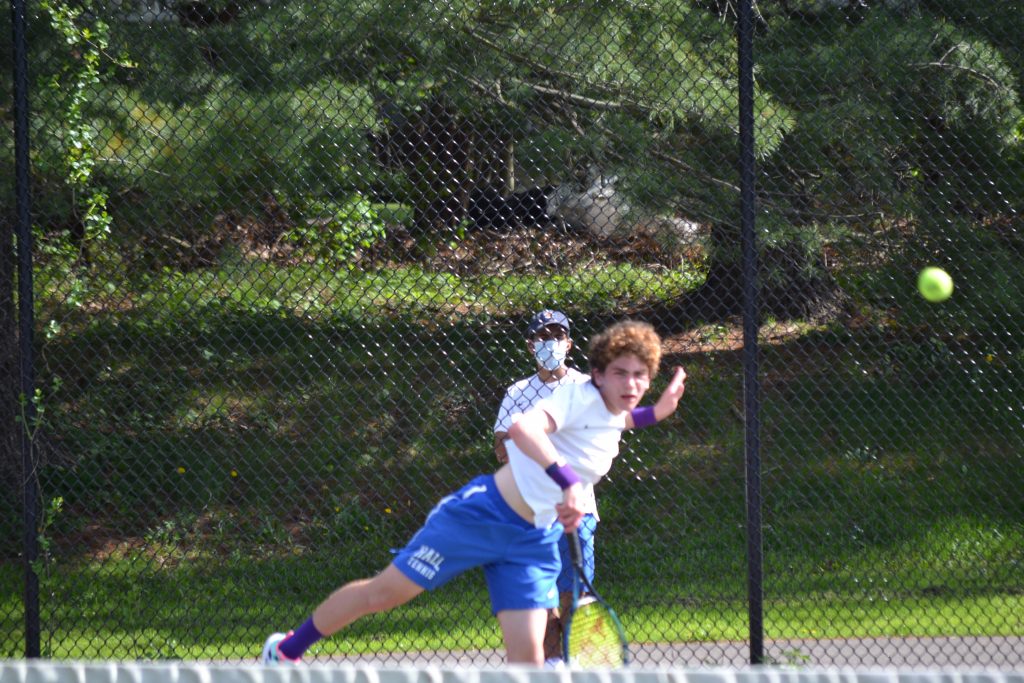 On the doubles courts, the Guardians’ No. 1 team of Matt Dennis and Niteesh Kalangi  bested Hall’s Lucas Singer and Jamir Freeman in straight sets, 6-0, 6-3. At that point there were three matches still being played – one singles and two doubles – with the winner of the match hanging in the balance as things were tied at two apiece. Players from both teams were gathered between the singles and doubles courts, rotating their attention and cheers. That energy reinforced what was  at stake for both teams.

The final singles matchup to conclude was between sophomore Alex Hyams of Hall and freshman JD Landry from Glastonbury. It was a back-and-forth affair with both players going all out on each point. In the tiebreak, Landry would double fault to 7-8, and Hyams followed with a point on serve to get to within one point of the victory. He would win the match with a drop shot that Landry could not reach. Hyams would take the win, 6-4, 1-6, 10-8 in a grueling matchup. “When it’s a close match,” said Solomon, “I like the fight he has.” 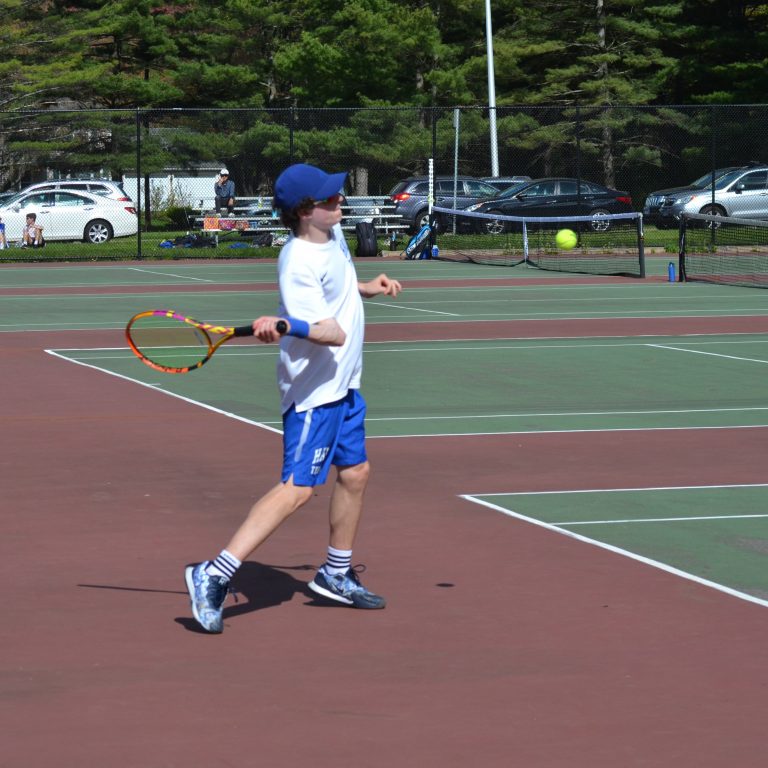 With Hall now holding the 3-2 match lead, it would be up to the No. 3 and No. 4 doubles matchups to decide who would remain unbeaten.

On the third court, Prinav Binoj and Alex Hu of Hall and Elliot Kim and Nick Bonaiuto split the first two sets with the Guardians duo taking the first set, and Binoj and Hu rallying for a 6-4 win in the second. The third set went to a tiebreak as well. Trailing 8-5, Hall had the serve but a long return moved Glastonbury to within a point of a victory and a tied match. One the next point, a long return from Hall was out and Glastonbury had secured the 10-5 win in the third set.

The match came down to a showdown between No. 2 doubles teams of Hall’s Brady Dulitsky and Mark Zhang, taking on Brendon Wagner and Nathan Azimov. With all the other matches now having concluded, everyone’s attention was on doubles court 2. The hard serving Azimov and Wagner were up a set and leading in the second set 5-2. Hall’s tandem managed to play themselves into a 40-15 lead in the eighth game, a long return and a  wide return of service worked it to match point for Glastonbury. On Azimov’s second serve, the return was long and Glastonbury had sone the game, the set and the match. 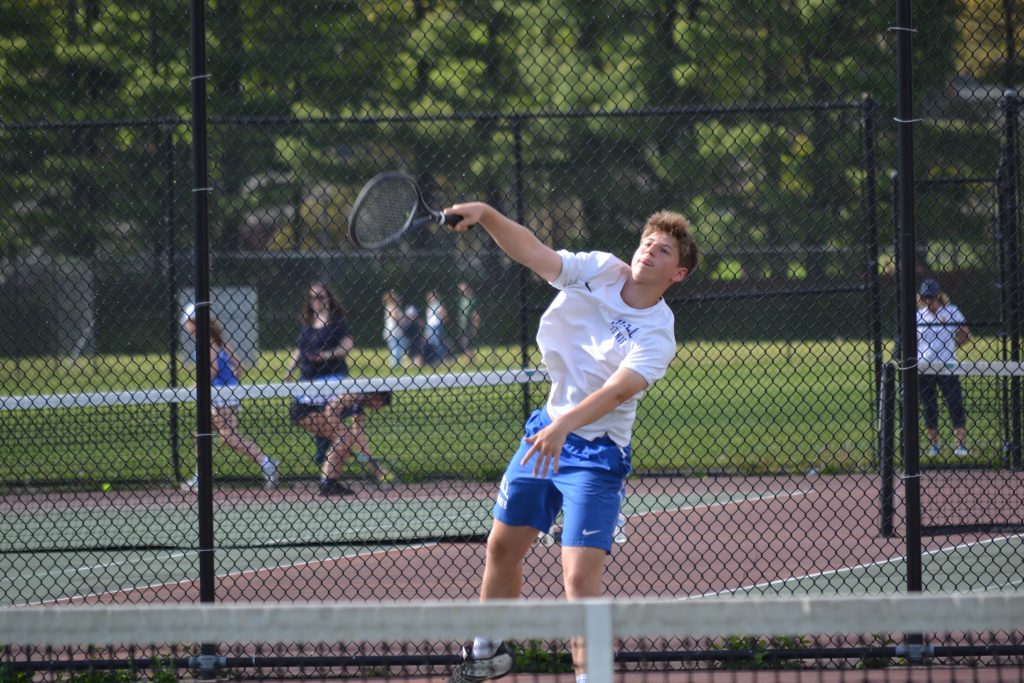 Brady Dulitsky of Hall is part of the Warriors’ No. 2 doubles team. Hall vs. Glastonbury boys tennis. May 13, 2022. Photo credit: Paul Palmer

Solomon took a philosophical approach to his team’s first loss of the season. “I told them not to worry about it. It was just a blip. “ He went on to say “ You get confidence from winning and you learn from losses, so this is a chance to learn and we will.”

ou see here? Click here to subscribe to We-Ha’s newsletter so you’ll always be in the know about what’s happening in West Hartford! Click the blue button below to become a supporter of We-Ha.com and our efforts to continue producing quality journalism.