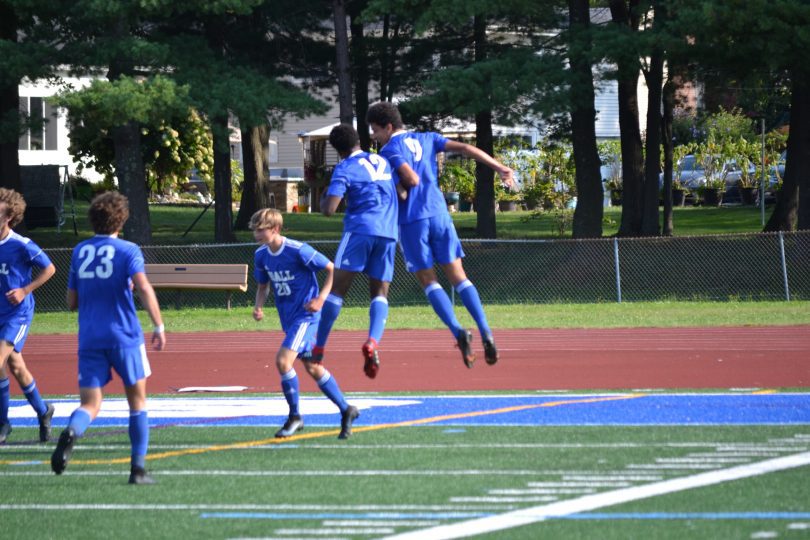 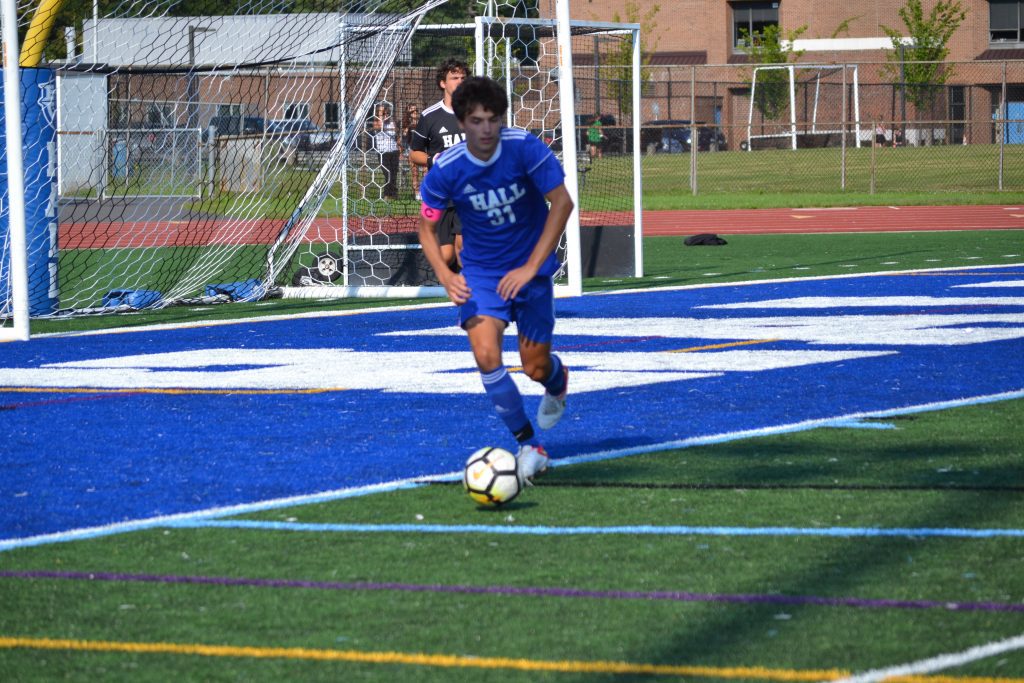 Early in the season, coaches are still evaluating their talent, and making sure all the pieces fit together. But when you are the No. 1 ranked Class LL team – and defending state champs –  you are expected to be on top of your game from the start.

For the Hall Boys soccer team, that meant facing No. 3 ranked Farmington in just the second game of the season. The Warriors more than passed the test with a 3-0 win behind a strong team performance. 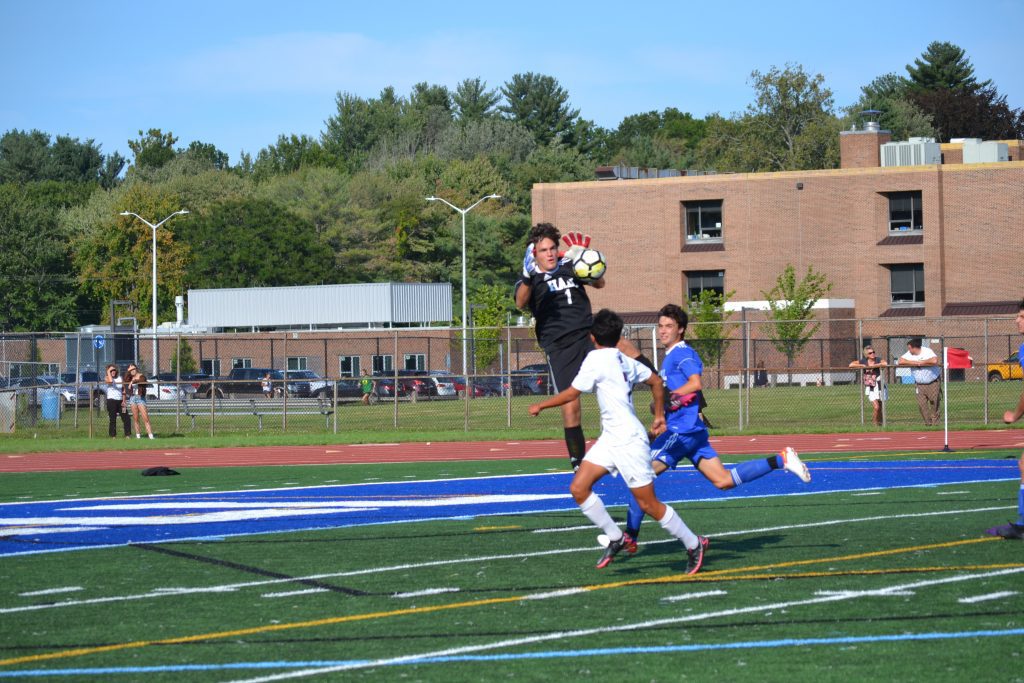 The first 20 minutes of the match saw both sides probing the defense of the other, looking for opportunities to get on the board. Hall’s backline of senior captains Toby Ruffo and Scott Gilden, along with seniorCyrus Parham and junior Quinn LaRock, played brilliantly all day. The quartet and goalies Tyler Fairchild and Mauricio Vega Estades were in sync with each other throughout the match.

“They were rock solid,” said Hall coach Zeke Seguro of his defenders. “They didn’t allow them to get in behind us.”

The strong defense allowed Hall to counterpunch all day long against Farmington. The Warriors used quick passing and team speed, especially down the left side of the field, to get multiple scoring chances.  “We need to iron out our midfield,” Seguro said after the game. “We like to pass and build from that.” 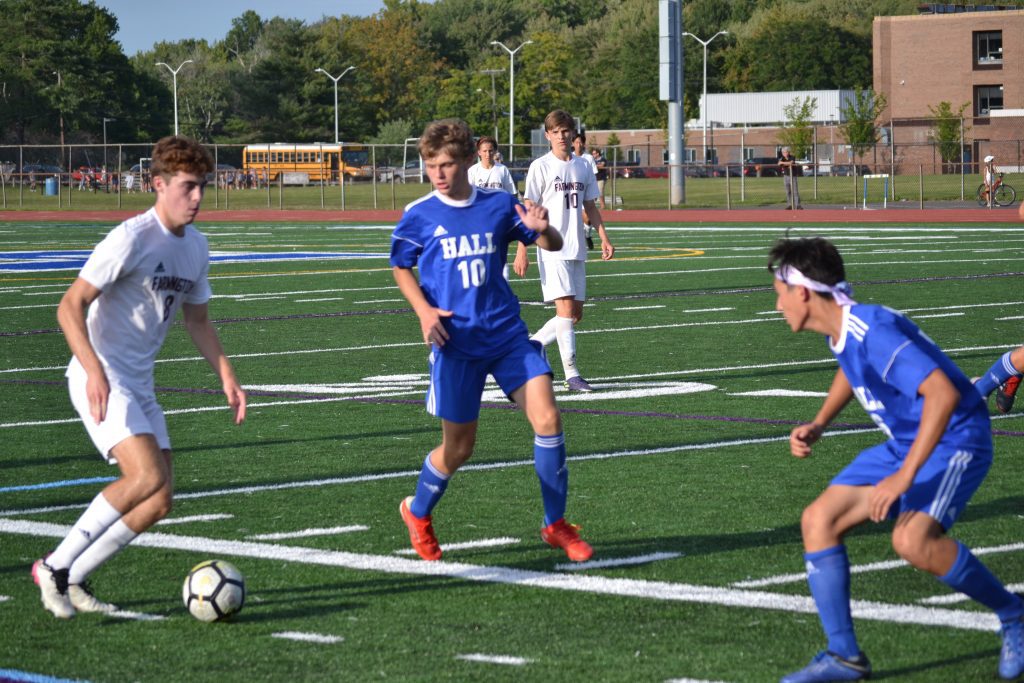 Hall struck first when Sam Sandler made a run with the ball into the left side of the Farmington box and slotted a low pass across the mouth of the goal that Almeida slotted into the back of the net. Farmington responded by amping  up the pressure, forcing Fairchild to come off his line twice and win challenges in the air, and make a deflection of a low shot heading for the far corner of his goal.

At the half both coaches stressed to their teams how important the opening 10 minutes of the second half would be. The River Hawks dominated the early part of the opening minutes, running their offense through All-CCC selection Caden Gallagher and Danny Simeone up front with Danny Jia and Issac Coello at the midfield. But Hall’s defense refused to give-in, time after time denying that last pass that Farmington needed to set up a shot on goal. 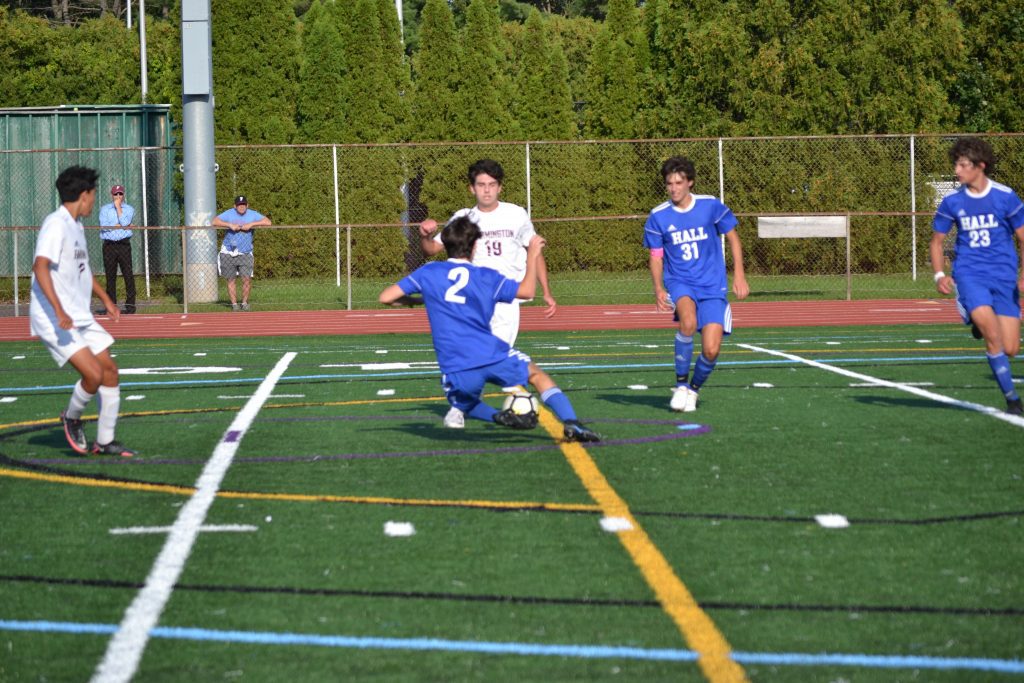 Hall ran a strong counter game, gaining control of the ball, making smart runs and passes, and using the width of the pitch. At 18:20 into the second half, their hard work paid off when Copeland Schlatter found the back of the net off a corner.

The two teams then exchanged attacks and counter attacks, with both getting a few good chances. With just over 16 minutes to go in the game, Almeida put the game away with his second goal of the day. This time it was Gilden making a run along the wing and sending a through ball into open space. Almeida ran onto the ball, carried it across the mouth of the goal while shielding himself from defenders, before turning and banging a shot high into the net.

Farmington had two good chances to score from that point out. First it was Ricky Duan cracking one of the crossbar from about 25 yards out, and then Hall goalie Mauricio Vega Estrades – who had subbed in for Fairchild just moments earlier – made a fine leg save to deny the last, best chance for the River Hawks. 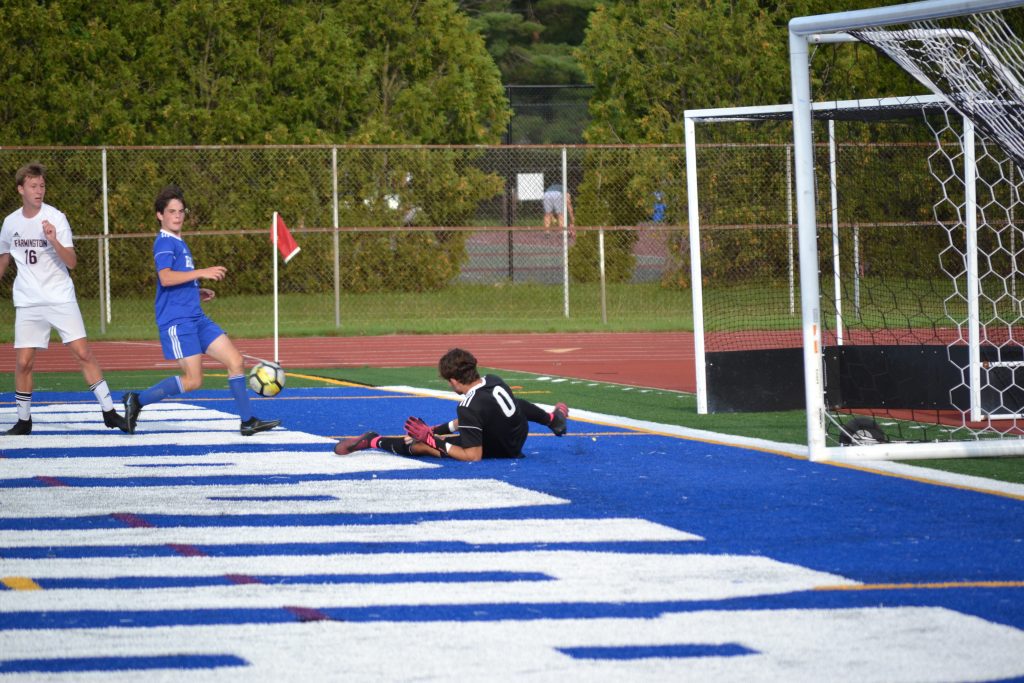 With the win Hall moves to 2-0 on the season, and with a roster made up of mostly first year players, Seguro knows his team still has a lot of work in front of it.

“We have a lot of inexperienced players, but a lot of good young players. This was a complete team effort, but we have a lot of work to do throughout this year.” 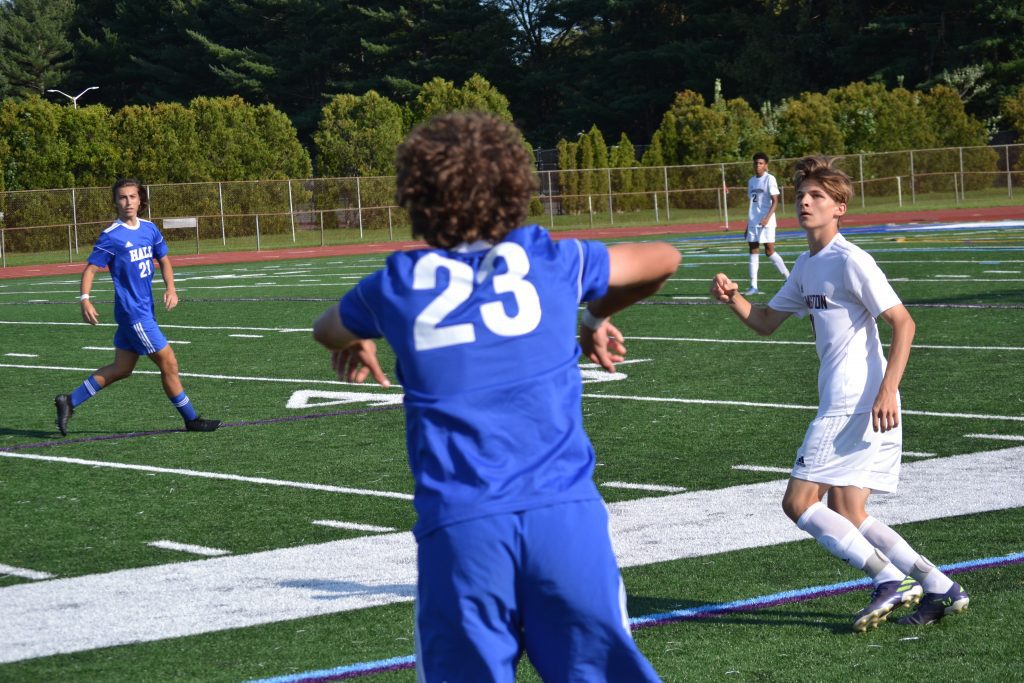 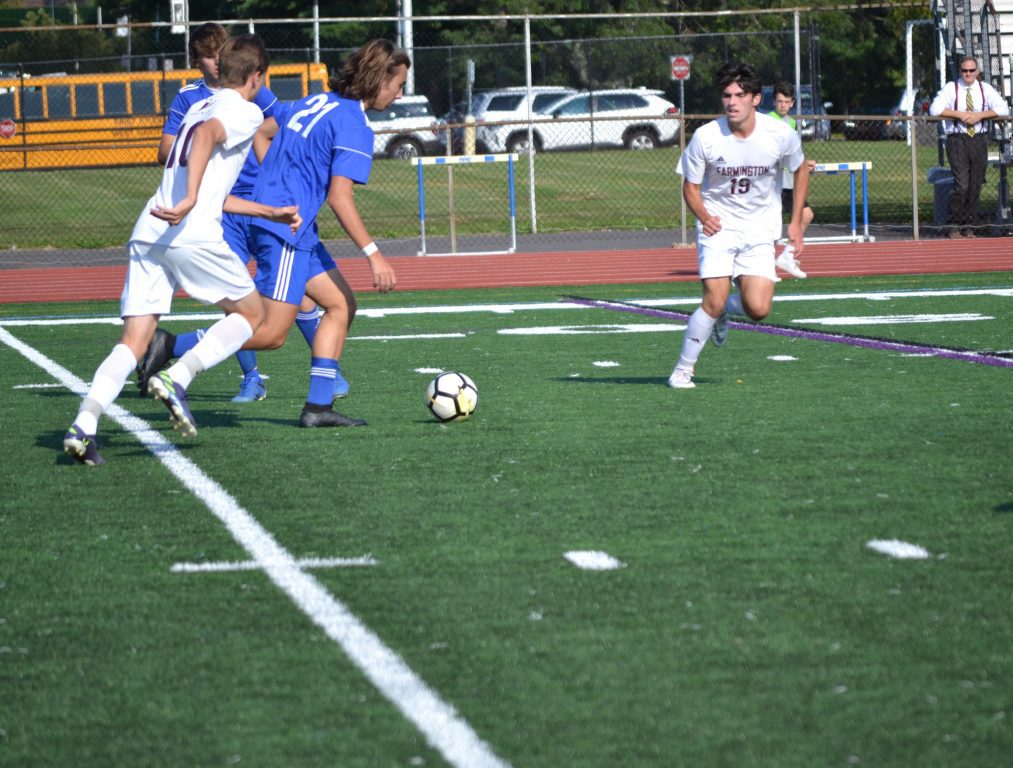 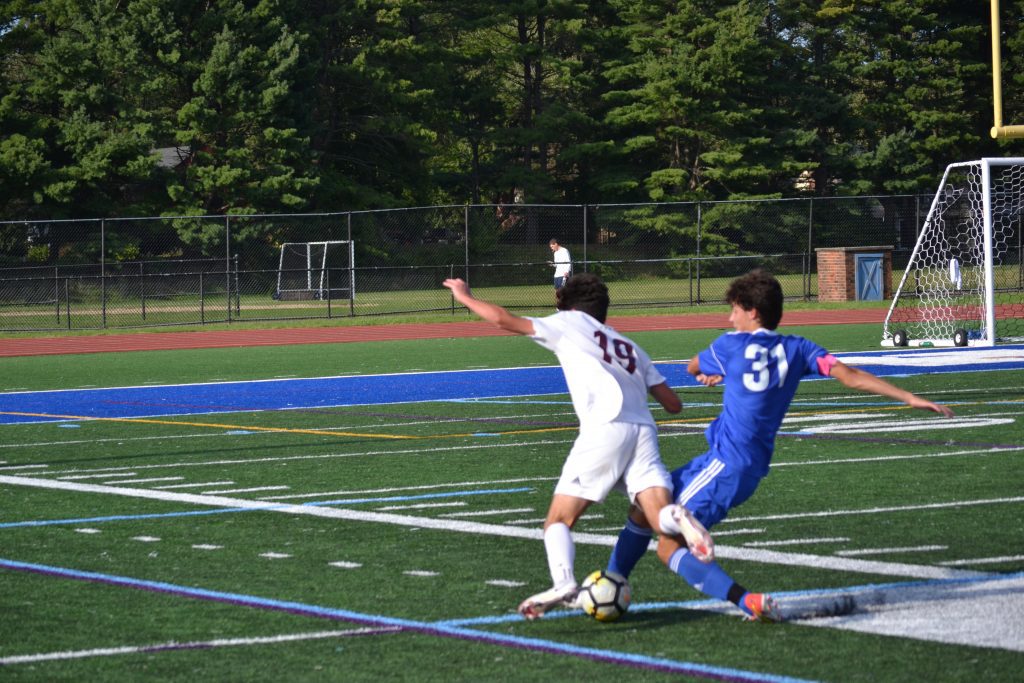