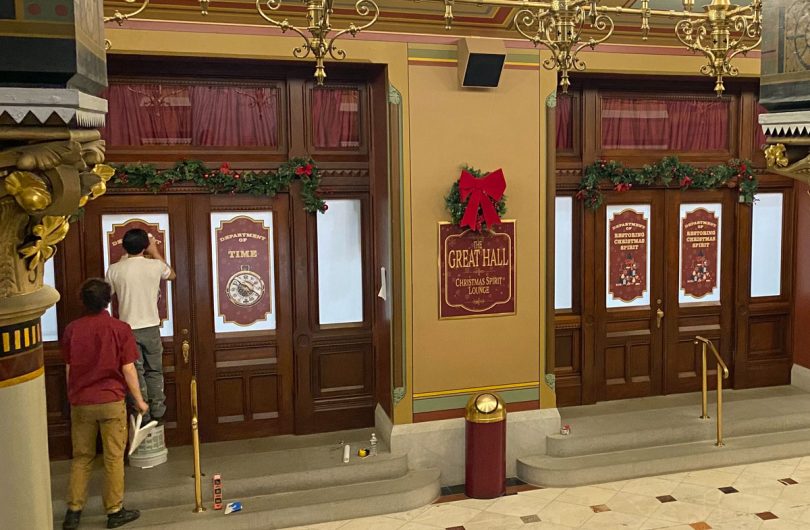 Transformation of the Connecticut State Capitol for filming of "The Ghost of Christmas Always." Photo credit: Christine Stuart, CTNewsJunkie.com

Filming for ‘The Ghost of Christmas Always’ was taking place in West Hartford earlier in the month, and has moved on to sites in Hartford. 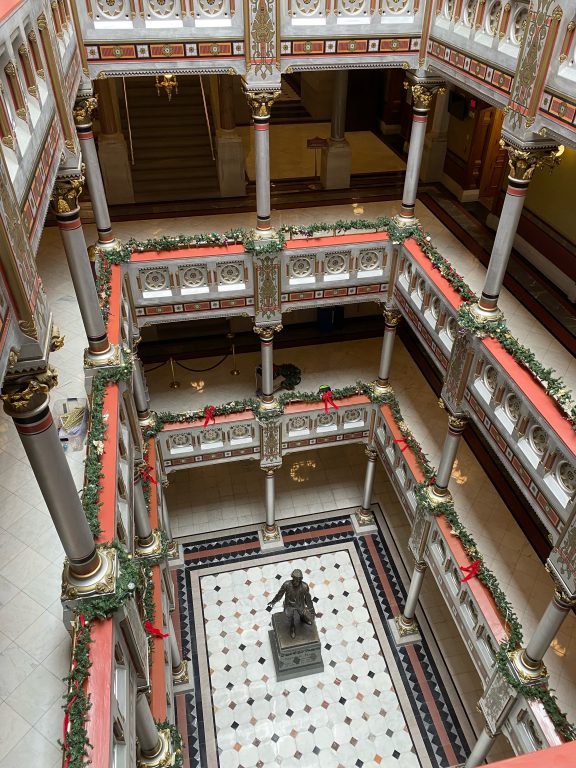 Transformation of the Connecticut State Capitol for filming of “The Ghost of Christmas Always.” Photo credit: Christine Stuart, CTNewsJunkie.com

The Hartford area has become a stage –  or more accurately a movie set – as filming for a Hallmark movie that was taking place in West Hartford earlier this month has shifted to the capital city.

A representative of the production company, Connecticut-based Synthetic Cinema International, told We-Ha.com previously that after shooting scenes at a home at 34 Foxcroft Road in West Hartford, crews would be heading east to Bushnell Park in Hartford and other locations in the city. 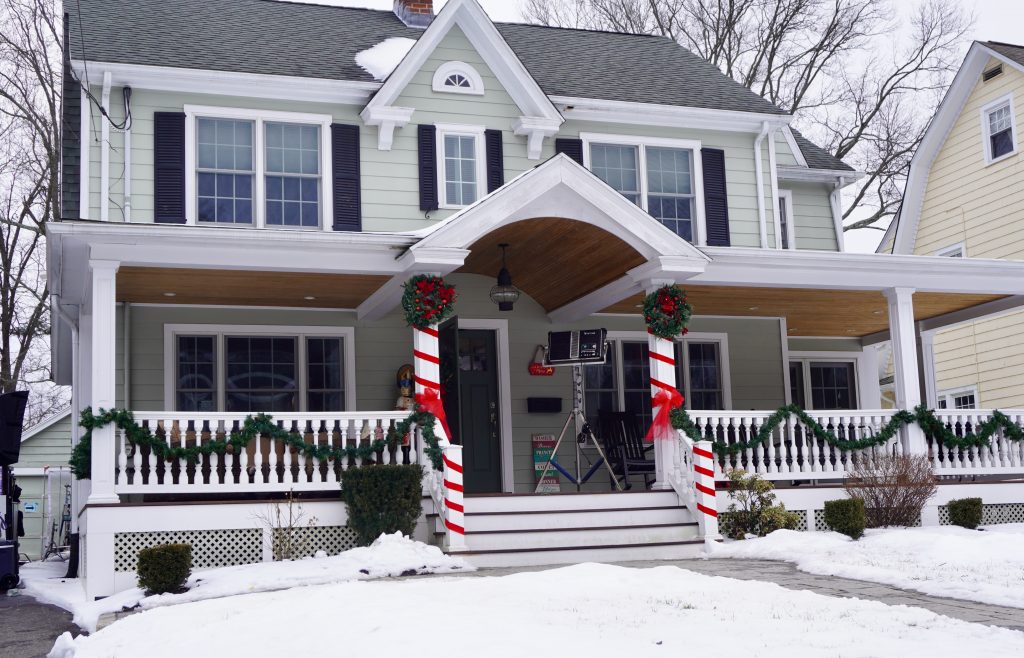 A home at 34 Foxcroft Road in West Hartford is being used in one of the scenes from a Hallmark Christmas movie. Photo credit: Ronni Newton (we-ha.com file photo)

Two weeks ago, the production company was filming at the soup kitchen at Christ Church Cathedral on Church Street in Hartford, and last week they transformed the historic Connecticut’s State Capitol building with Christmas decorations, turning the House chamber into the “The Great Hall, Christmas Spirit Lounge” for scenes that were filmed on Friday and Saturday.

According to a report by Christine Stuart and Hugh McQuaid of CTNewsJunkie.com, “[m]ovie staff spent much of Thursday wrapping the banisters of the Capitol’s upper floors with holly boughs and applying yuletide decorations to the building’s already ornate furnishings.” Eric Connery, facilities administrator of the Office of Legislative Management, told CTNewsJunkie that the movie production would pay whatever expenses resulted from their use of the building as well as the cost of extra hours worked by Capitol police. 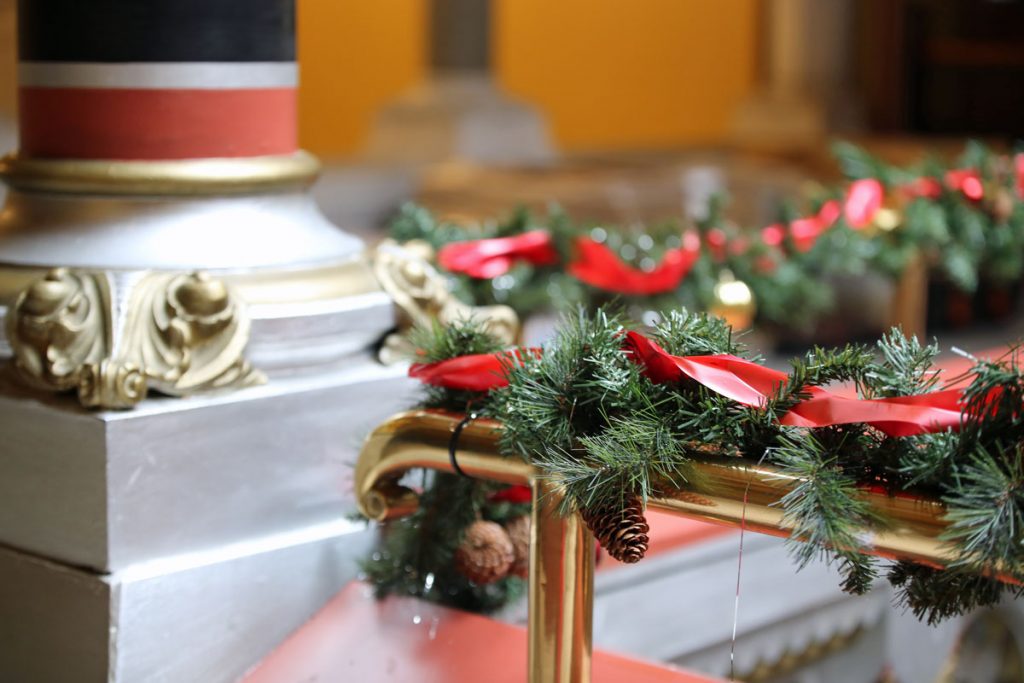 Transformation of the Connecticut State Capitol for filming of “The Ghost of Christmas Always.” Photo credit: Christine Stuart, CTNewsJunkie.com

While details about “The Ghost of Christmas Always,” including the release date and cast, are being kept under wraps, West Hartford Public Relations Specialist Renée McCue previously provided We-Ha.com with the following synopsis: “Katherine Marley is spending her afterlife working for the Department of Restoring Christmas Spirit as a Ghost of Christmas Present. She loves her job, visiting earth every Christmas to help one unsuspecting soul rediscover their Christmas spirit. But this year has something unusual in store for her. Their assignment is a man named Peter, and not only is it difficult to be sure why they’re ‘scrooging’ him (his Christmas spirit is on point), but there’s also the issue that Katherine and Peter just might be fated for each other. If fate was a real thing. Which it’s not … right? Ghosts of Christmas Always takes us behind the curtain, allowing us to experience the magic of A Christmas Carol from the ghosts perspective, while charming us with a romance for the ages.”

Connecticut’s tax credits have been a boon to the growth of the local film industry, and in addition to “The Ghost of Christmas Always,” West Hartford has been the backdrop for multiple movies in the past year, including “Call Jane” – whose stars include Elizabeth Banks and Sigourney Weaver – and “Pep” – which stars James Madio, was based on the life of Hartford boxing icon Willie Pep.