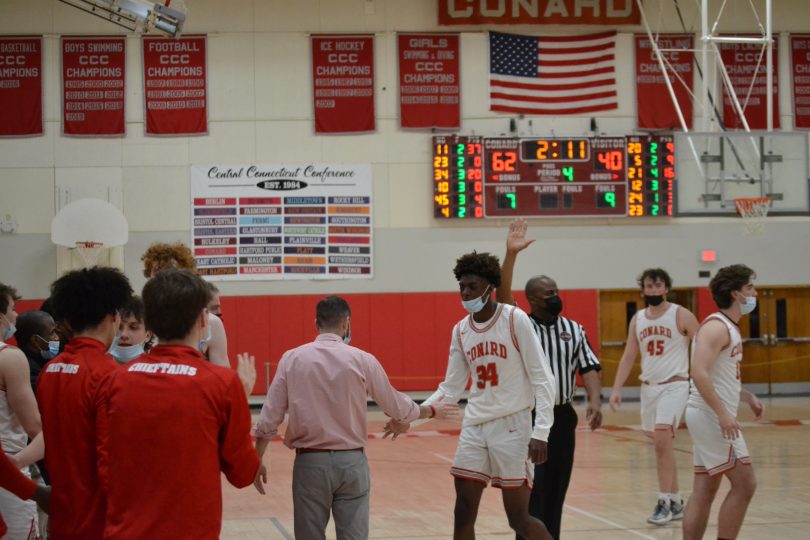 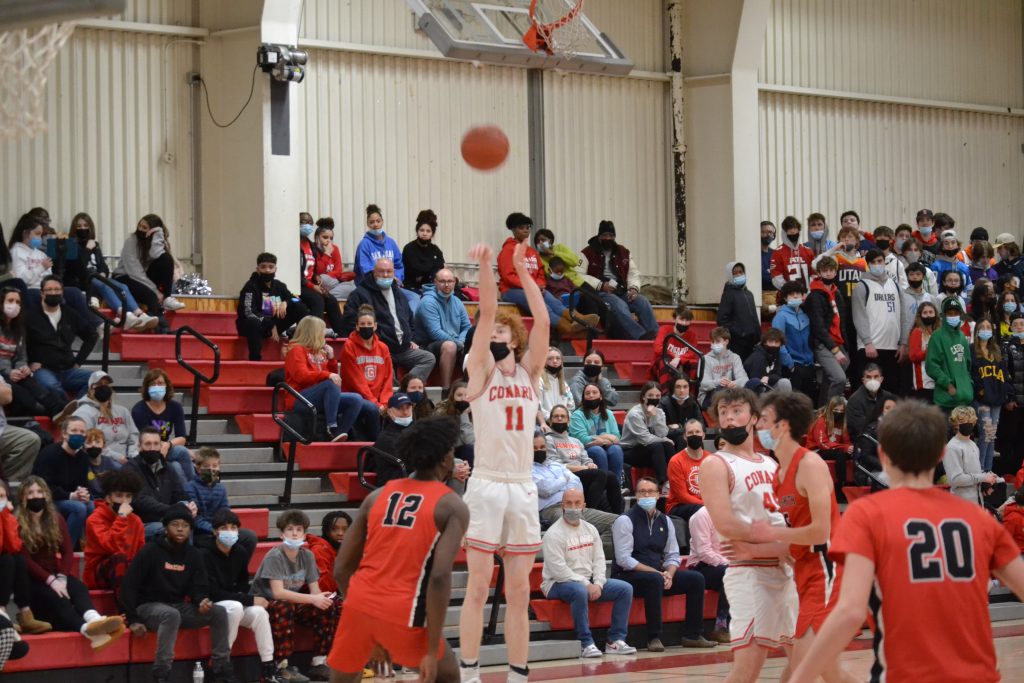 Conard High senior Jalen Hamblin is the picture of perseverance. Cut from the Chieftains basketball team as a freshman and sophomore, he had perhaps his finest game with the team Tuesday night, Senior Night, when he went for a double-double, featuring 20 points and – while they’re not officially tracked – more than 10 rebounds.

“My best memory is just being on this team,” said Hamblin. “I was cut two years in a row and worked my butt off to get here and my teammates have been so supportive.” 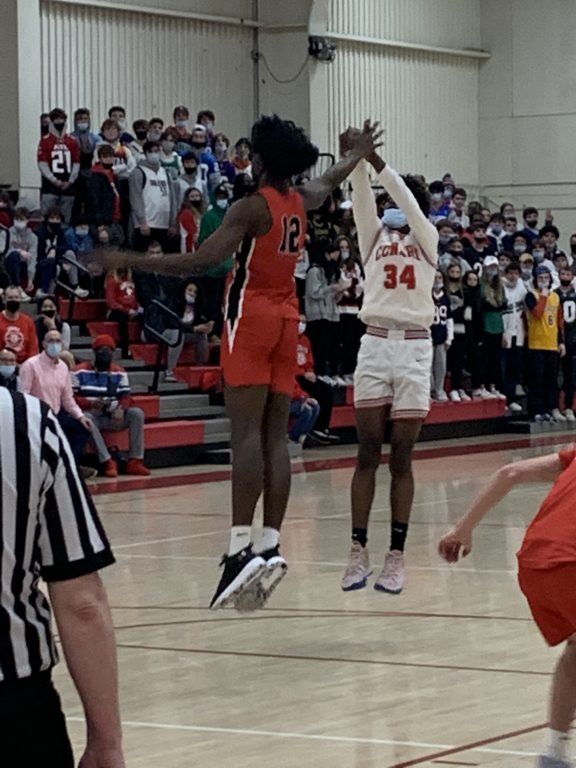 It’s easy to get lost on a team featuring a player the caliber of Hamblin’s teammate Riley Fox. The sophomore scored all of Conard’s 13 points in the first quarter against E.O. Smith. At The half he had 30 of his team’s 35 and would finish with 38 points – including a two-handed dunk on a steal and breakaway.

But Conard’s coach wants it known they are not a one-man team. “We can win in a variety of ways,” said Jared Leghorn. “If teams don’t focus on Riley he’ll get his baskets. If they do, we’ve got others that will score.”

On Tuesday, that other scorer with Hamblin. Many of his points came from hard work and determination on the offensive boards, fighting for possession and going back up strong with the ball on several occasions. “I’ve been working on rebounds and knowing where the other players are,”  he said.

With a loud crowd in the student section cheering them on, Conard (15-2) turned things around in the second quarter. Trailing by 7, Fox hit a basket and was fouled. He missed the free throw and Hamblin kept the ball alive. It went back to Fox who was fouled again while shooting. This time he hit both free throws and it was a 3-point game with 6:06 to play. 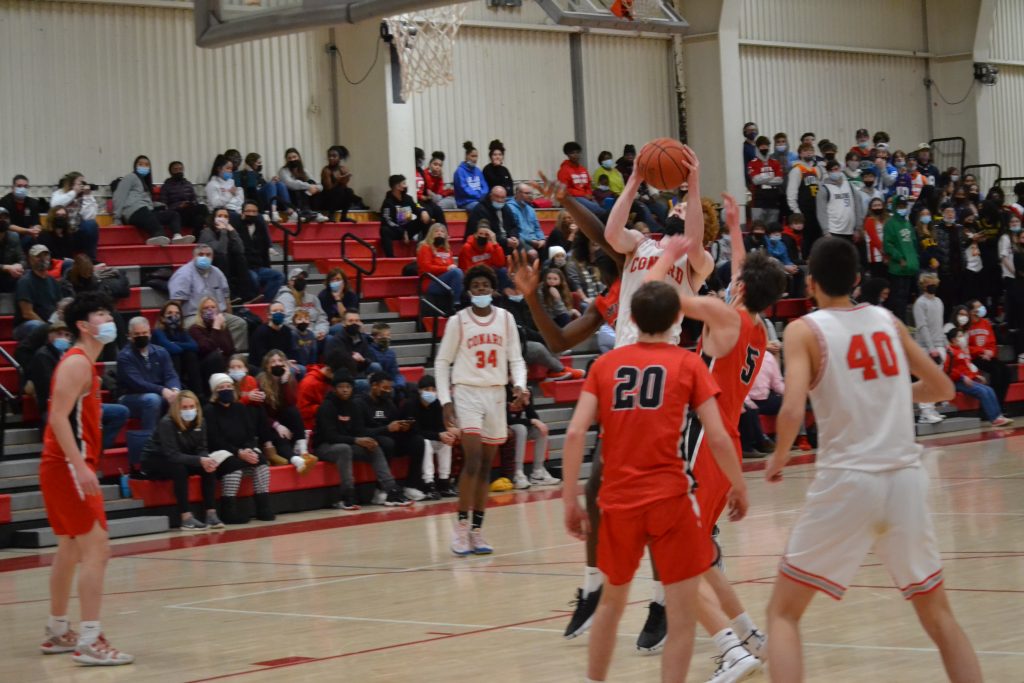 Hamblin would hit Conard’s next two baskets – the first points not scored by Fox – and the lead was just 1 for the visitors. With 2:35 to play in the second, Conard took its first lead when Declan McCann stole the ball and passed ahead to Fox who laid it in. 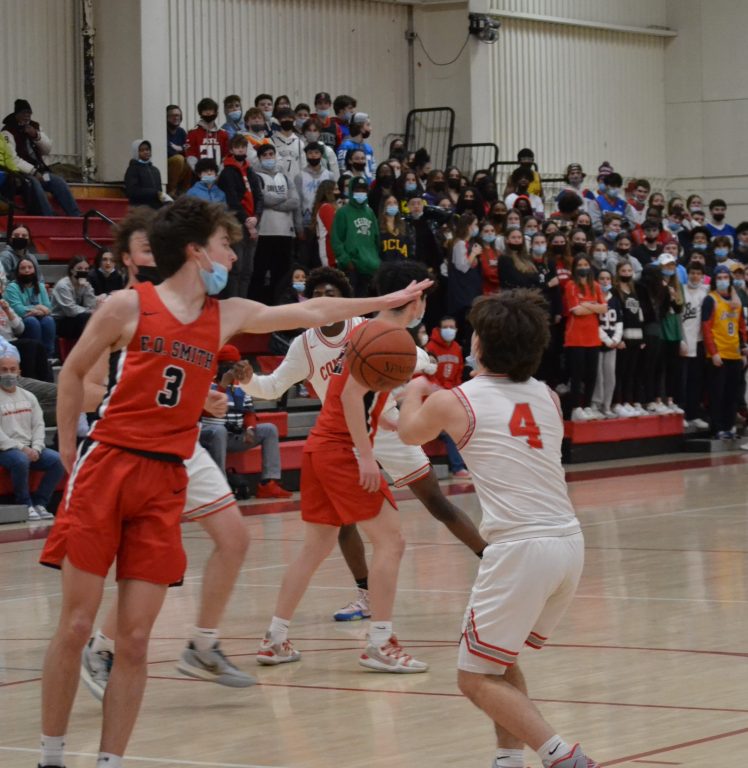 Moments later Fox blew the roof off the gym when he stole the ball and took it in for a two-handed dunk that made it 29-26. By the end of the quarter, Conard had pushed the lead to 35-28, but the result of the game was still in question.

In the third Hamblin was dominant on the boards. First he scored on a great backdoor cut off the pass from fellow senior Michael Weiss. Then he drove the hoop into traffic, hitting the basket for a 39-32 Conard lead with five-and-a-half to play. Later he grabbed a long rebound off a Conard miss and hit the mid-range jumper, making it 43-25. 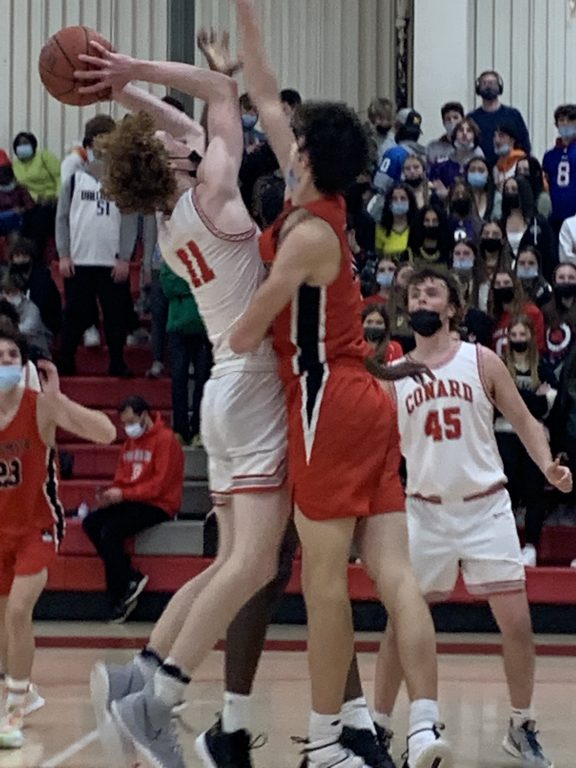 Not only was Hamblin strong on the glass, but he and teammate Ryan Bushnell owned the defensive low post. Over and over they shutdown E.O. Smith’s attempts to spin to the hoop or run baseline plays. “Bush is our must unheralded player on the team,” said Leghorn. “He not only anchors our defense but sets lots of screens for out baskets.”

Hamblin and Fox continued to get the job done on the boards and on offense in the fourth. The Chieftains built a 22-point lead and that allowed Leghorn to take his starters out with 2:11 to play in the game.

“I’m having a blast with this team,” said the coach. “We want to be the best team in school history, and we just need to stay totally locked in and on the same page for team success.”

Conard has three games left in the regular season. The first is against one-win Tolland on Wednesday, and then a big test when they travel to one-loss RHAM on Friday, before closing out the regular season with the finale against Hall on Feb. 22.

But on this senior night, the feel-good story and the lesson of the night came from Hamblin. “I give 100% every game. I just play basketball.” 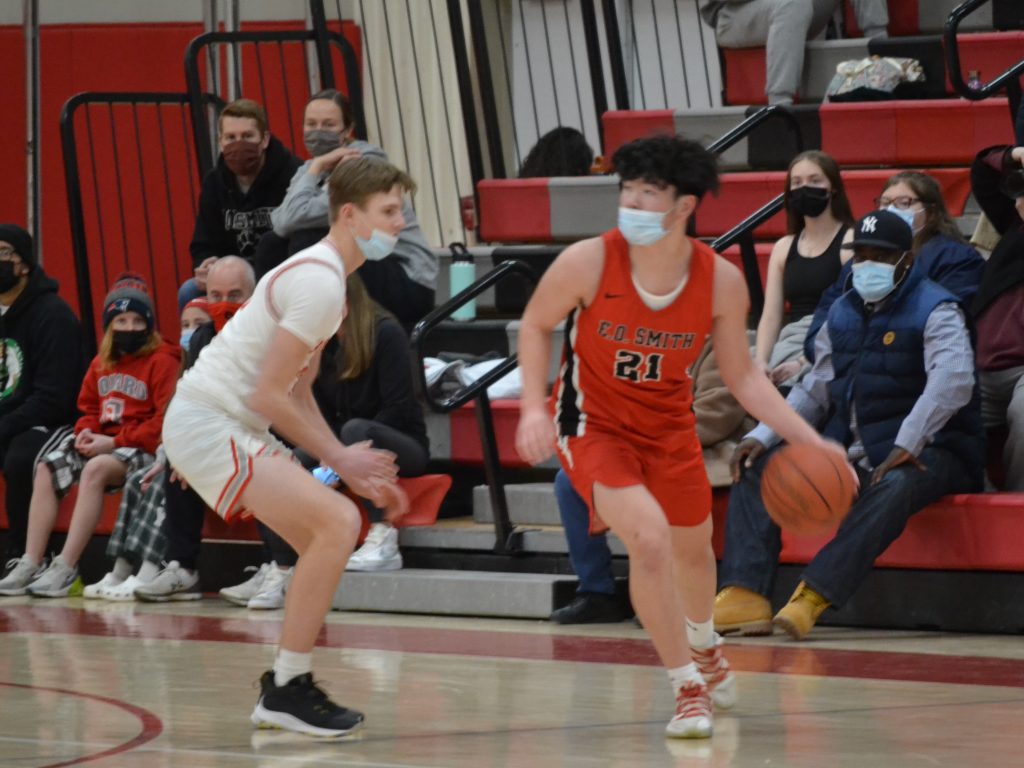 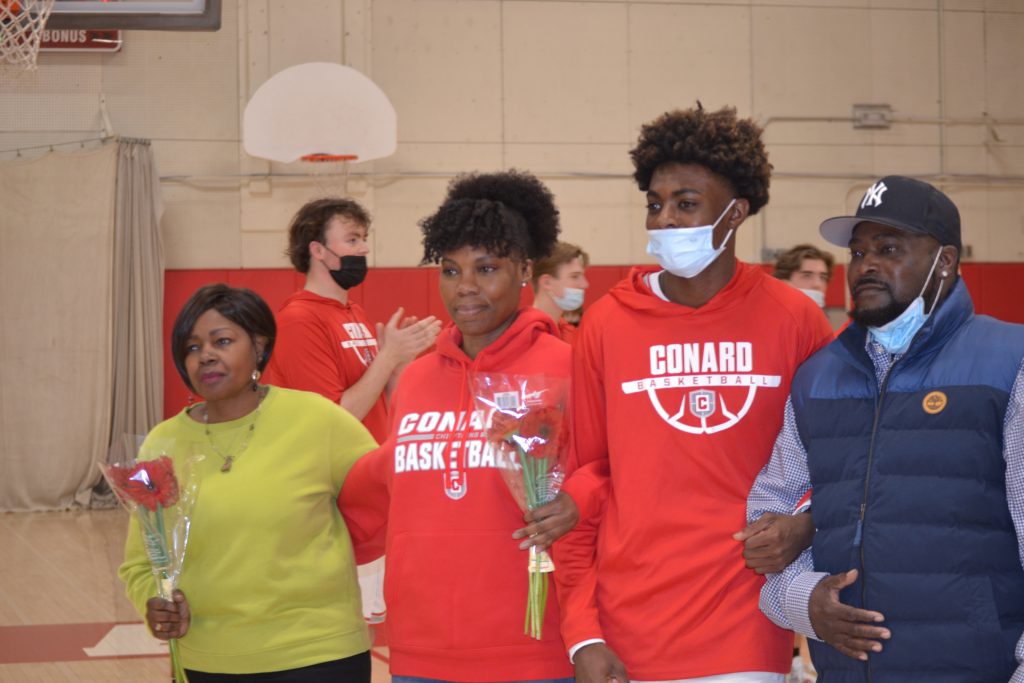 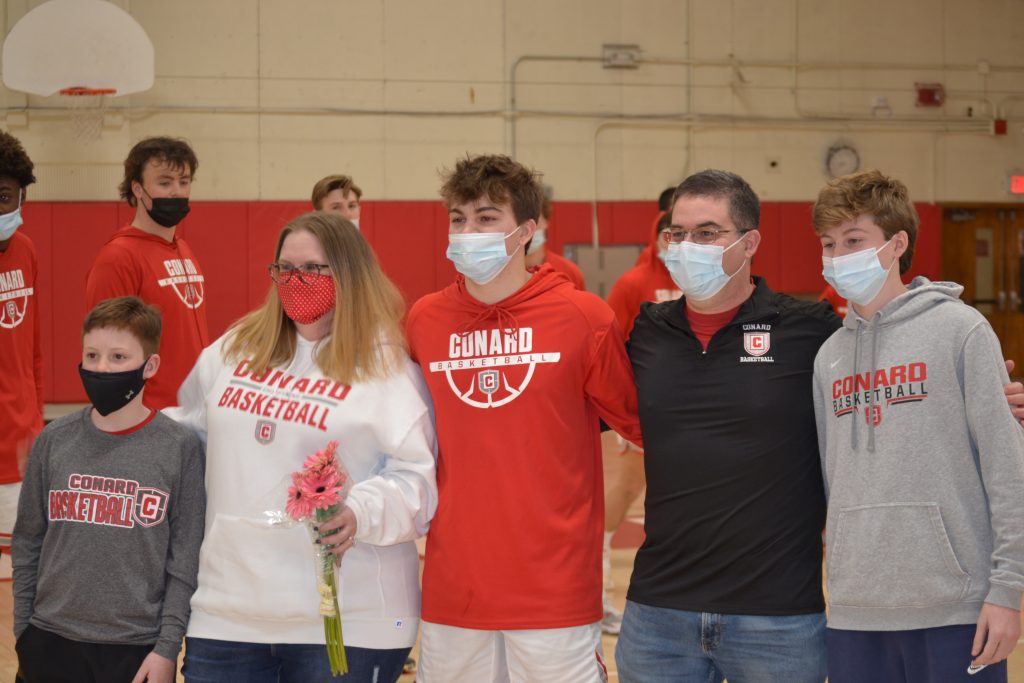