[Updated with video of the crash taking place and suspect arrest information] A West Hartford man received minor injuries when his vehicle flipped on its side after being hit by a driver involved in a police pursuit. 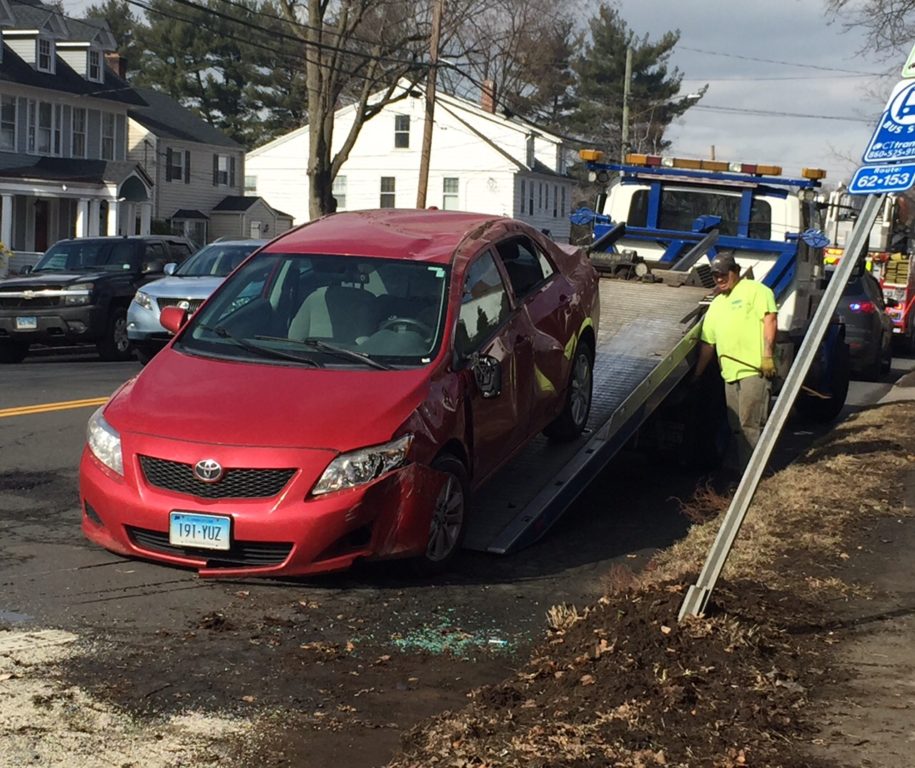 A Toyota Corolla, driven by a West Hartford man, rolled over on North Main Street on Wednesday after being hit by a suspect driving a stolen car and fleeing Hartford Police. Photo credit: Ronni Newton

The driver of a stolen vehicle, who led police on a pursuit from Hartford through West Hartford and onto Simbury Road in Bloomfield, was also involved in a hit and run accident in West Hartford at lunchtime Wednesday, police said.

Lt. Eric Rocheleau said that West Hartford Police received an alert from Hartford Police around noon  Wednesday notifying them that the driver of a stolen vehicle had struck several Hartford cruisers and was “actively fleeing.”

The vehicle, a 2013 Acura, occupied by two 18-year-olds, fled Hartford and entered West Hartford followed by more than a dozen police vehicles.

Capt. Jeff Rose said that the driver of the stolen Acura was heading west on Fern Street and ran the red light at Fern and North Main Street, clipping a red 2010 Toyota Corolla being driven by Marvin Kay, 79, of West Hartford who was headed northbound on North Main Street. Kay had a green light, police said.

According to a video taken by a witness and shared with police, which can be seen above, the impact appeared to to be with the far rear of the Toyota’s passenger side, and caused the driver of the Toyota to lose control, hit the curb, and flip onto its side.

Another witness video, which can be seen here, shows a black vehicle clip the red Toyota that is passing through the intersection. A line of police cars is following the black vehicle.

Kay received only minor injuries but was transported to St. Francis Hospital by ambulance as a precaution.

Hartford Deputy Police Chief Brian Foley said in an email that the stolen Acura had been observed by a patrol officer at 11:53 a.m. near the intersection of Park and Zion streets.

As Hartford officers attempted to stop the vehicle, the “suspect barely avoided a construction site and construction workers” and struck a cruiser in the rear passenger area. The impact pushed the cruiser into an officer on the scene. The officer was treated at St. Francis Hospital for minor injuries, Foley said.

Hartford Police kept the Acura in sight in Hartford and followed it onto I-84 westbound, where it exited at Flatbush Avenue and traveled through West Hartford.

Stop sticks deployed by West Hartford Police “caused the vehicle to lose air pressure in several tires,” but although it slowed down the Acura did not stop, police said.

After the collision with the Toyota in West Hartford, the Acura continued traveling through West Hartford into Bloomfield, ultimately reaching Simbury Road in Bloomfield, where the vehicle’s rim disintegrated and it finally stopped, police said.

According to Foley, neither the driver nor the passenger suspects exited the vehicle when ordered by police. Officers “broke the vehicle’s windows, opened the doors, and removed the occupants after a brief struggle,” Foley said. 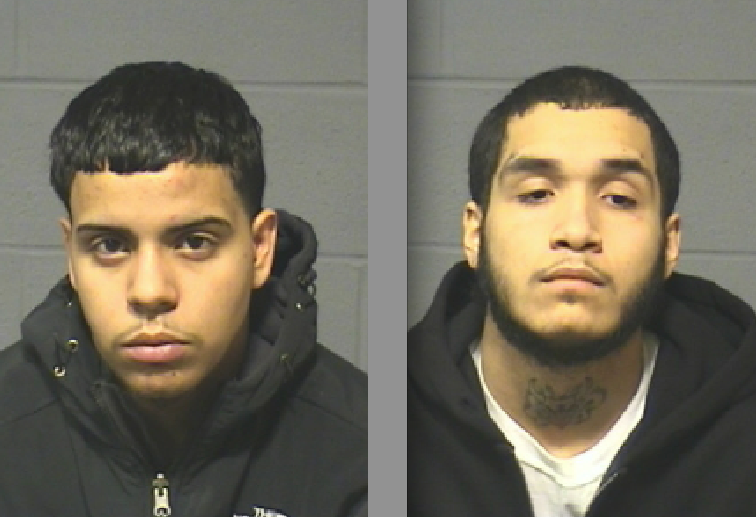 The driver of the stolen vehicle has been identified as Jonathan Rosado, 18, of Girard Avenue in Hartford. He was charged with second-degree larceny, evading responsibility, reckless endangerment, engaging police in pursuit, interfering with police, first-degree criminal mischief, operating without a license, second-degree criminal trover, and disobeying an officer signal in a construction zone. Police said he is “known by auto theft detectives in the region” and is a suspect in other cases.

The passenger has been identified as 18-year-old Joshua Dionne of Foxcraft Drive in Manchester. He was charged with second-degree larceny, second-degree criminal trover, and interfering with police. Police said that Dionne was on probation for prior auto thefts and is the subject of outstanding arrest warrants from Wethersfield and East Hartford which would be served on Thursday.