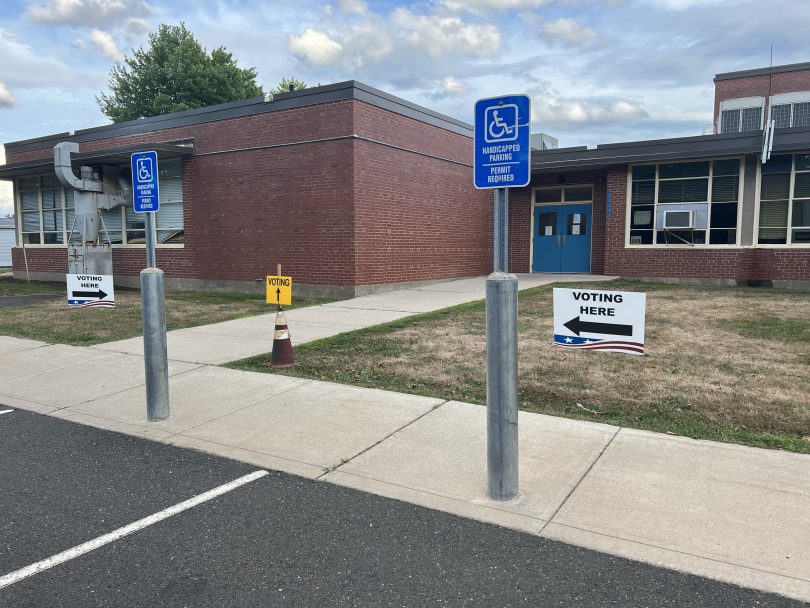 The same entrance was in use but the rooms for voting at King Philip Middle School were changed due to the heat. Courtesy photo

The original rooms where voting was taking place at West Hartford’s King Philip Middle School were changed to air conditioned spaces due to excessive heat.

Voting at King Philip Middle School was modified late Tuesday afternoon and relocated to air conditioned space within the building after temperatures reached 95 degrees in the rooms that had originally been set for voters in West Hartford Districts 1-1 and 1-2.

“Due to the excessive heat it was a danger to the poll workers and the equipment,” Republican Registrar of Voters Beth Kyle said. While voters were in and out of the space within minutes, the workers – and the equipment – couldn’t escape the heat.

The Aug. 9, 2022 primary fell on the eighth day of a heat wave in the area, and not only were temperatures in the mid-90s by mid day, but the humidity created a heat index of 105 degrees.

There was no change to the entrance to the school for voting, just the rooms, Kyle said. She apologized that it was a bit longer walk within the building, and said that clear, color-coded signage had been posted to make sure voters knew where to go.

The same machines as in the original spaces were moved to the new rooms, and the registrars were on site while the transition was taking place. Kyle said the secretary of the state had been informed and had approved the move.

It was hot – but not as hot – inside Bugbee Elementary School, which was newly added as a polling place for the Aug. 9 primary. The only air conditioned spaces at that school are portable classrooms which aren’t handicapped accessible, so the voting could not be relocated. Kyle said there were dozens of fans in use at Bugbee.