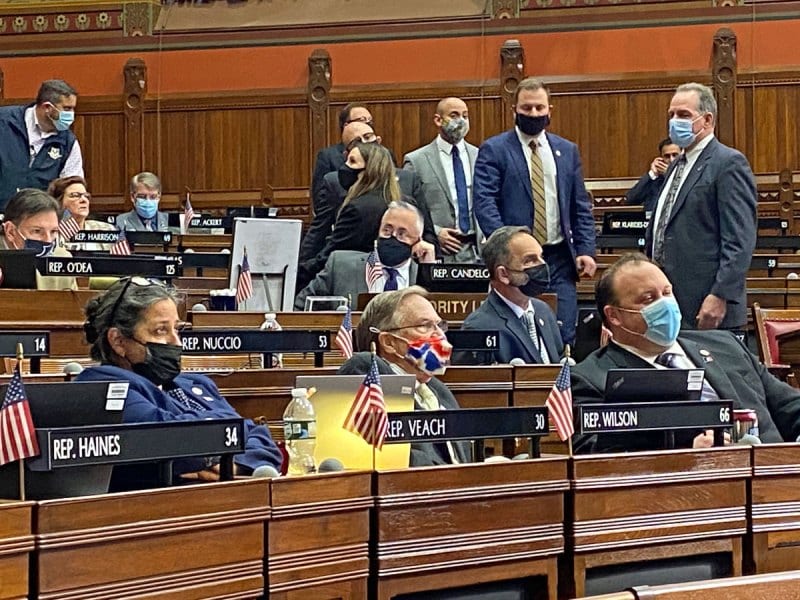 Republicans watch as an amendment is defeated. Photo courtesy of CTNewsJunkie.com

If approved by the Senate voters will eventually see the question as a ballot referendum.

The House moved a step closer Tuesday to amending the constitution to allow no-excuse absentee voting – an option nearly 650,000 residents used last year – but proponents fell short of the super-majority margin needed to put the question to voters next year.

The resolution passed 104 to 44 with the support of Democrats and nine Republicans who approved letting Connecticut voters consider how the state’s election rules are outlined in the constitution. If approved by the Senate, voters will see the question as a ballot referendum – eventually.

“The voters of this state may agree. The voters of this state may not agree, but in supporting this resolution today, we would be giving them the opportunity to voice their opinion as to whether the current restrictions as to who can vote by AB should be removed,” Rep. Dan Fox, a Stamford Democrat who is co-chairman of the Government Administration and Election Committee, said.

Although the resolution will move forward, there was not enough Republican support to put the question on the ballot in 2022. Lawmakers will need to pass it again in two years, which will delay a referendum until at least 2024.

Connecticut is among 16 states that require a specific excuse to vote using an absentee ballot, according to the National Conference of State Legislatures. In 2014, Connecticut voters rejected no-excuse absentee ballots at referendum.

Before the debate, House Speaker Matt Ritter said he believed Connecticut residents want the same voting options as most other states, especially since so many of them used absentee ballots last year when a temporary change allowed the practice to protect voters from the coronavirus.

“I don’t think you’ll see AB voting as high as you saw this time because we won’t be in a pandemic, but I still think you’ll have thousands among thousands of people who would prefer to mail their ballot in,” Ritter said.

Most Republicans opposed the resolution citing concerns that widespread use of absentee ballots could invite voter fraud. During a more than four-hour debate, they sought to change the resolution by installing language that would have added photo identification requirements and signature verification policies to the question sent to voters.

“There’s always evidence of fraud in the absentee ballot world. We’ve seen it. It has not been widespread, but if you don’t have the proper safeguards it’s going to invite fraud and that’s our concern,” House Minority Leader Vincent Candelora said during a Tuesday press conference.

The amendments proposed by Republicans failed along party lines. Rep. Gale Mastrofrancesco, R-Wolcott, said she was disappointed that Democrats rejected the amendments.

“I really think that we could have worked in a bipartisan fashion. It’s sad for the voters of the state of Connecticut,” Mastrofrancesco said. “We’ve tried many times to try to work together, and try to offer solutions and for some reason it just seems to be one-sided.”

Even if support for those changes potentially brought proponents closer to the supermajority required to put the question before voters next year, Ritter told reporters he would rather “do it right” than “make a bargain we’re going to regret.” He said the amendments were an attempt to address a rare problem.

“There’s just not widespread voter fraud from absentee ballots and it’s sort of parroting remarks from a discredited former president of the United States who was the source of a lot of that friction and commentary,” Ritter said.

During the debate, Republicans pointed often to a decision last year by the Secretary of the State’s Office to mail applications for absentee ballots to all registered voters. Although legal, Republicans said it increased the potential for a person to request a ballot in another person’s name.

Rep. David Rutigliano, R-Trumbull, said he received an application for someone named “Danny” at his house and was concerned that similar experiences would undermine confidence in the system.

Rep. Christine Palm, D-Chester, said Tuesday’s debate had often drifted from the matter at hand, which was letting Connecticut voters decide whether the constitution should be modified.

“Discussions of widespread voter fraud, which has been debunked over and over and over again, questions about signatures, photographs, malfeasance, alleged mistrust. All of these are important questions, but they are not what is before us as a question. It is simply, should the will of the people obtain? Should we change the constitution to allow those details to be worked out?” Palm said.

In a statement following the vote, Secretary of the State Denise Merrill called the House approval an important step in putting Connecticut in line with most of the country.

“This is a common-sense, voter-centric reform that the overwhelming majority of voters, Democrats, Republicans, and unaffiliated, are in favor of, and it is disappointing that there wasn’t more Republican support to let the voters decide this issue next year. I look forward to this amendment being swiftly taken up and passed by the Senate,” Merrill said.