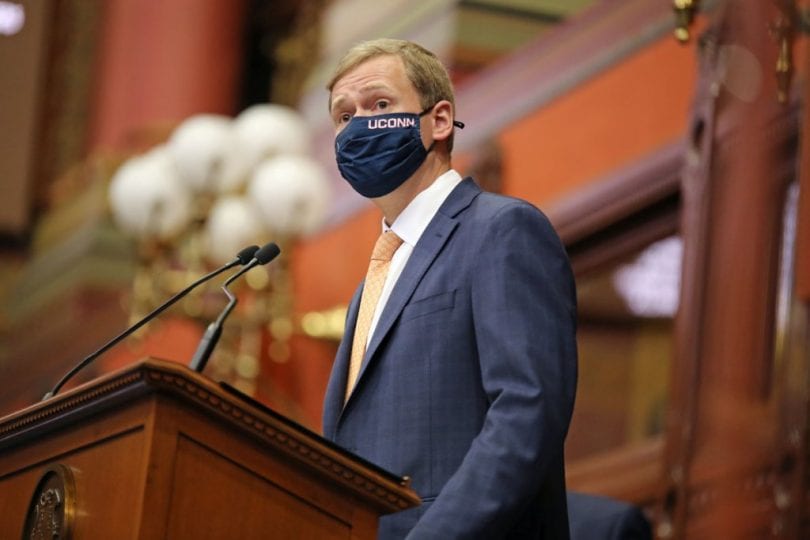 The bill passed the House early Tuesday morning after 16 hours of debate.

After at least three years of controversy and public protests, the House voted on a bill that will remove the use of the religious exemption to childhood vaccinations for some children if they wish to enroll in school.

The bill passed 90-53 after 16 hours of debate following a significant concession to families already holding exemptions from vaccinating their children from measles, whooping cough, and other highly contagious diseases.

Rep. Michelle Cook, D-Torrington, introduced an amendment an hour into the debate that would allow any child currently enrolled in kindergarten through sixth grade to continue to use their religious exemption for the rest of their school career. The original bill said only those in seventh grade and above would be allowed to keep their religious exemption.

“We’ve heard the concern about removing students from school so what this amendment does, simply, but it’s a huge change to change the seventh grade grandfathering to kindergarten,” Cook said.

The bill goes into effect in September 2022, but it would not apply to any child that currently has a religious exemption.

Families testified during a 24-hour public hearing that it would force them to make untenable decisions about their children’s education because it would divide families or force families who can’t afford it, to homeschool. Some children would be able to continue their education and other parents felt they would be forced to keep children home because they don’t believe they should be vaccinated and may not be able to get a medical exemption.

Parents against eliminating the religious exemption argued that under the original proposal it would displace up to 10,000 students from school. According to the Department of Public Health, there are nearly 8.300 students with religious exemptions enrolled in school for the 2020-2021 school year.

Rep. Jonathan Steinberg, D-Westport, said it’s unknown how many students would be displaced by lowering the age to kindergarten.

He said it was also unclear how many people would be impacted under the original proposal.

He said the reason they were tackling the issue is public health.

“Let me be clear, vaccine hesitancy is becoming a direct and serious threat to the public health,” Steinberg said. “It demands a proactive approach, not a reactive one dependent on quarantines and contact tracing. We’ve seen how that’s gone.” 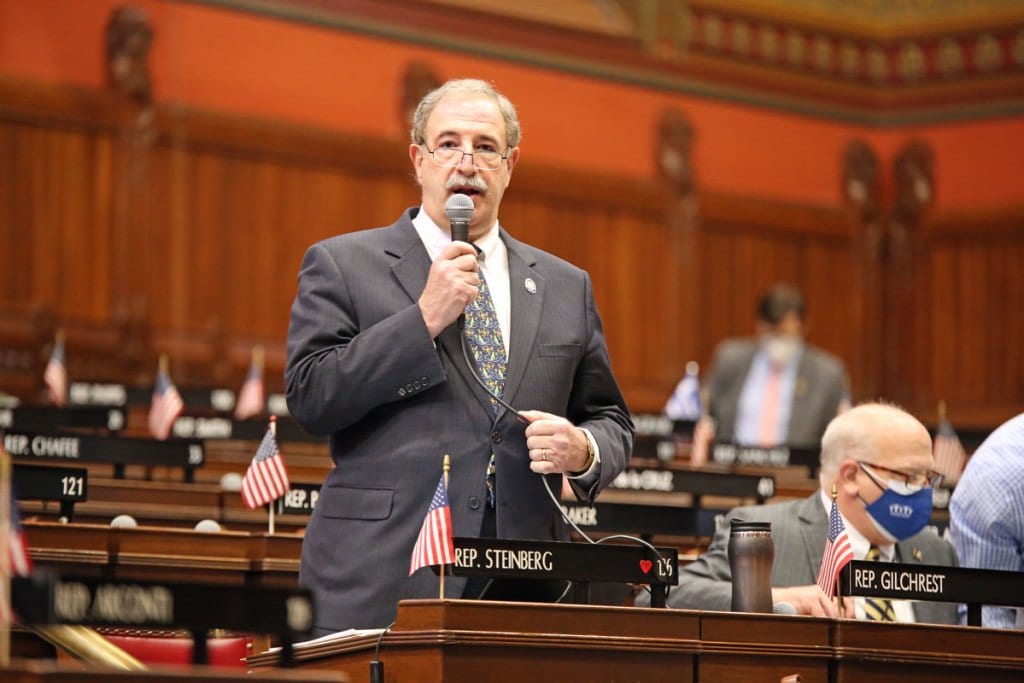 The chair of the Public Health Committee also took aim at the role of disinformation in the rise of religious exemption claims in the state.

He said no one wants to declare any student ineligible to attend school, but “efforts by health care professionals and educators to educate families about vaccines have been unable to compete with fear instilled by the disinformation net.”

He said the bill also expands the ability for parents to apply for a medical exemption, a process that parents currently say is too restrictive.

The issue was not a partisan one.

Lawmakers were forced to weigh public health, constitutional rights and parental rights during the debate.

“It is an alarming trend to see the number of parents who are opting not to vaccinate their children,” Rep. Christie Carpino, R-Cromwell, said. “And we are looking at a real public health crisis just over the horizon.”

She added: ”I am voting today and supporting this amendment to prevent a public health emergency. The best way to address an emergency is to avoid it.”

But others felt the legislation was making it impossible for children who are under the age of 5 who don’t want to get vaccinated to get an education in Connecticut.

She said legislators are making these decisions based on “nothing.”

“No risk, no facts, no data, whatsoever,” Rebimbas said. “This is not an anti-vaccine or pro-vaccine position. This is common sense.”

Rep. Jaime Foster, D-Ellington, said the bill was not controversial “for those with expertise.”

She said she knows that’s hard for parents who are vaccine hesitant to hear. “When you trust scientists, when you trust medical providers this choice is not hard.”

She said the “financial consequence” of the 2018 measles outbreak in New York was $8.4 million. Between 2004 and 2017 the median cost of a measles outbreak was $32,000 per case, according to another peer-reviewed study cited by Foster. 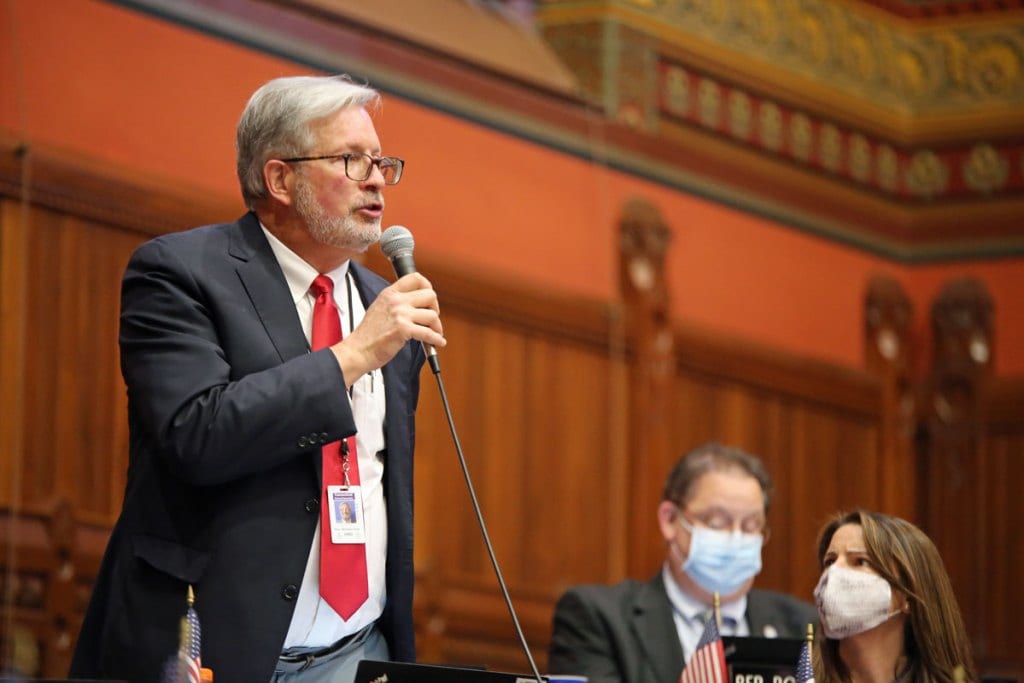 “I know that many of my colleagues have tried to suggest that there is no emergency, no concern. Nothing to worry about, nothing to address,” Foster said. “But the nature of a public health approach is to prevent an outbreak. To not wait for one to occur to take action.”

Lawmakers were also concerned about what happens to children who are unable to attend school because they refuse to be vaccinated.

“There are individuals in our caucus who want to protect those children from being thrown out, but it doesn’t fundamentally address the questions of what we do going forward as a state and how the children who are unable to have public education, how that education is provided to them,” House Minority Leader Vincent Candelora, R-North Branford, said. “The bill is totally silent on that issue.”

Candelora said there’s a constitutional right to an education.

“I would argue you can’t deny somebody without due process. So I’m not sure this bill would result in children being thrown out, but the public policy set forth today by this bill does imply that and we’re concerned,” Candelora said.

Both sides acknowledged that if the bill makes it to the governor’s desk it will likely be challenged in court.

Several times during the debate Ritter warned members that they are not allowed to read from testimony or their notes. Lawmakers were reminded several times to focus their questions on the underlying legislation.