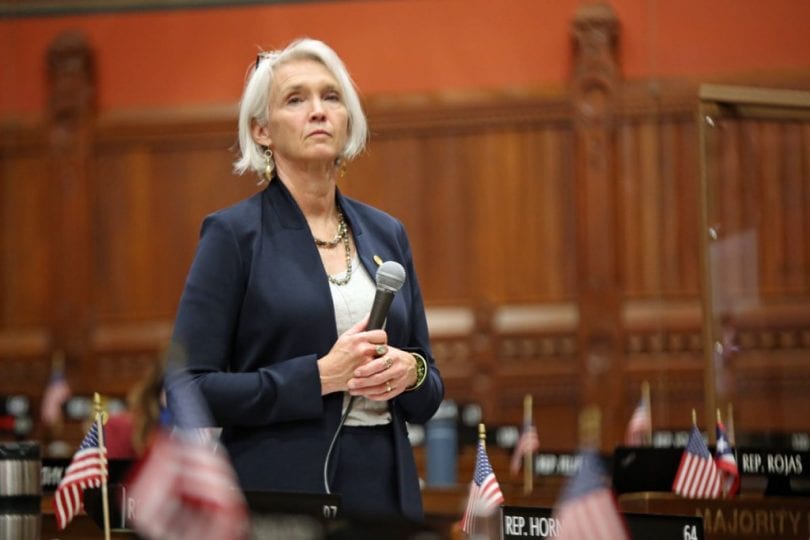 The measure passed with bipartisan support.

The House took the first steps Thursday to expand gambling in Connecticut.

The bill they passed 122-21 formalizes the agreement announced in March between Gov. Ned Lamont, the two federally-recognized tribal nations, and the Connecticut Lottery.

Proponents of the bill said sports betting has been going on in Connecticut, without the state or the tribes getting a piece of it, for years.

“Today I think it’s time to make sure we take charge of that market and regulate it appropriately,” Rep. Maria Horn, D-Salisbury, said.

Horn said the bill allows the Gov. Ned Lamont to amend the compacts with the Mashantucket Pequot and Mohegan Tribal Nations, which operate the Foxwoods and Mohegan Sun Casinos.

“They can also do online sports betting in person on the reservation. They can do fantasy contests,” Horn said.

Horn, who co-chairs the Public Safety & Security Committee says off-reservation the two tribes will also be to do online casino games and online fantasy contests.

The state of Connecticut will get a cut of those gambling revenues.

However, the fantasy sports industry says the language approved Thursday would make it illegal to operate in Connecticut before a licensing scheme is created by the Department of Consumer Protection. They worry that’s not going to happen before the start of the NFL football season in September.

“Legislation currently under consideration by the Connecticut General Assembly could result in the shutdown of paid fantasy sports in Connecticut for a significant period of time, possibly through the NFL season,” the Fantasy Sports & Gaming Association, said. “On behalf of all fantasy sports players in the state, the Fantasy Sports & Gaming Association (FSGA) strongly urges the General Assembly to make the necessary changes to the legislation to ensure Connecticut residents can continue to participate in the fantasy sports contests they know and love.”

Horn said that the fantasy industry are involved in a murky, gray legal area at best and “illegal activity at worst.”

There was bipartisan support for the measure.

Howard, a Republican from North Stonington, said when New Jersey opened up online gaming and sports betting they saw an increase in people going to the casinos.

“It’s driving the economy and driving tourism, which is a big part of our economy,” Howard said .

Lawmakers who opposed the bill expressed concern about the increase in problem gambling that it might create.

They said it might be easier for those with gambling problems to log into their phone from home and place a bet.

Rep. Anne Hughes, D-Easton, who voted against the bill said the online gaming apps are built to increase the amount of time people spend on their device and are themselves addictive.

Horn said she knows it sounds counterintuitive but with an online system they can identify the problem gamblers much easier and get them help.

The bill requires the two tribes to contribute $500,000 toward problem gambling and the Lottery will increase its contribution by $1 million to $3 million.

“There is no question the expansion of gaming lowers the bar to entry because you no longer have to physically go to a casino you will be able to game on your phone,” Horn said. “But with that actually goes the ability to have enhanced protections.”

In order to participate in online gambling a person has to be 21 years old and for a fantasy contest a person must be 18.

“This is already happening in Connecticut,” Horn said. “I would argue taking charge of it, regulating it, and ensuring there are adequate protections is in place there will be an improvement.”

And as far as timing is concerned, there’s still no clarity about how soon you can pick up your phone and place a bet.

If the Senate passes the bill and the governor signs it, the next stop will be the Department of the Interior which has to sign off on the changes to the tribal compacts.

“That is one of the reasons why this has some urgency because we need to get that process moving as quickly as possible,” Horn said.