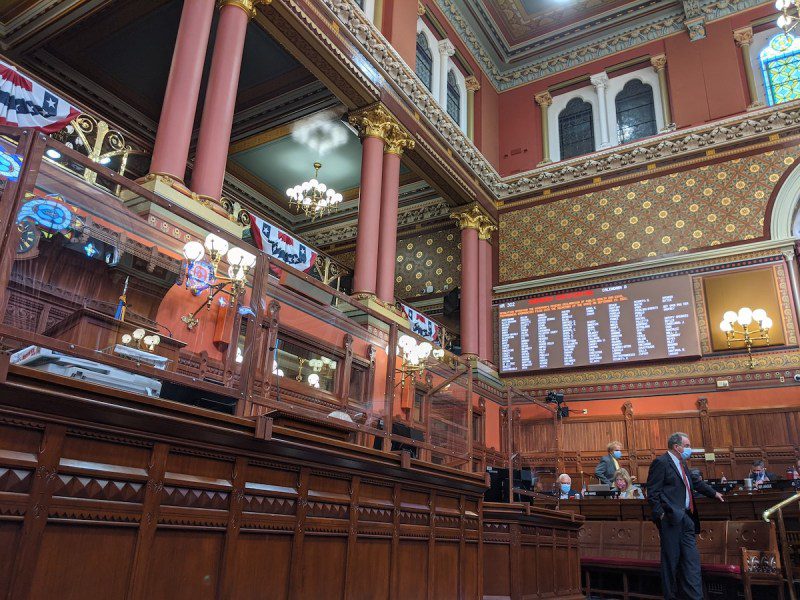 All three of West Hartford’s representatives voted in favor of the extension of the governor’s emergency declaration.

Despite opposition from Republicans and 10 Democrats, the House voted Monday to extend Gov. Ned Lamont’s emergency authority to manage the COVID-19 pandemic until Feb. 15, sending the matter to the state Senate where a vote is expected Tuesday.

Legislators in the House voted 80 to 60 to continue the emergency declarations which Lamont has used since March 2020 as the basis for executive orders related to the pandemic.

In addition to every Republican present, 10 Democrats voted against the ongoing emergency including: Reps. Raghib Allie-Brennan of Bethel, Andre Baker of Bridgeport, Jill Barry of Glastonbury, Pat Boyd of Pomfret, Michael Digiovancarlo of Waterbury, Jack Hennessy of Bridgeport, Anne Hughes of Easton, David Michel of Stamford, Robyn Porter of New Haven, and Travis Simms of Norwalk.

Last week, the governor said he planned to extend around a dozen orders, including an ongoing requirement that students wear masks in schools and vaccine or testing requirements for the staff of nursing homes, schools, state hospital facilities as well as state employees.

During the debate, Democrats generally praised the governor’s handling of the pandemic and said his use of the sweeping emergency powers had been measured.

“In light of the cautious, judicial, and careful manner in which the governor has acted with the authority bestowed upon him during the declared emergency and the unpredictability and danger posed by COVID-19 and the emerging variants, I believe it would be appropriate for this body to approve the resolution,” Rep. Daniel Fox, D-Stamford, said.

As was the case the last time the legislature extended the emergency declarations, Republicans were unanimously opposed to any continuance. Rep. Holly Cheeseman, R-East Lyme, said although Lamont may not have abused his emergency powers, the need for those powers had passed.

“The governor, having exercised his authority, deserves to take some time off. He can bask in what he’s accomplished. He can talk to us about what he would like to do and consult with us and more importantly consult with the people he represents,” Cheeseman said. “Let’s get back to regular order. Let’s get back to public hearings.” 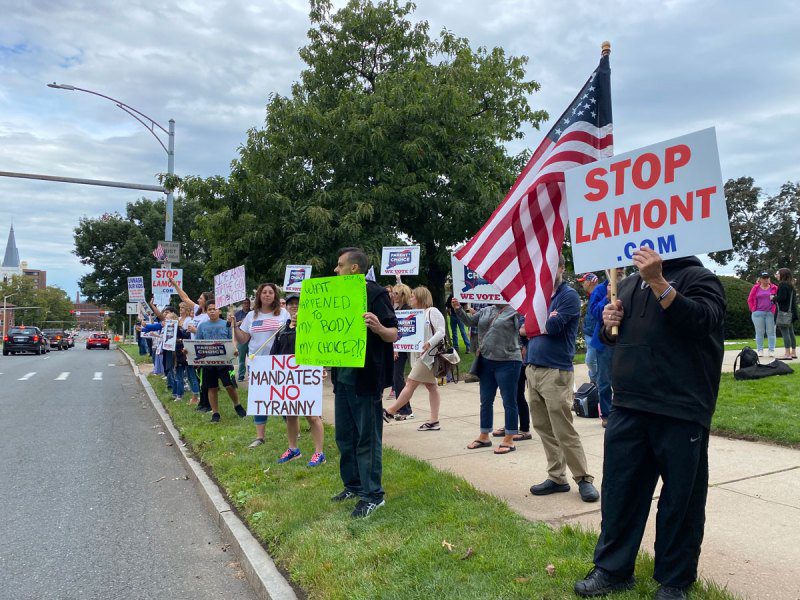 Republicans tried unsuccessfully to adopt a requirement that the legislature hold public hearings on new executive orders issued by the governor. Democrats voted the amendment out of order. House Minority Leader Vincent Candelora told reporters his caucus wanted an open dialogue rather than allowing the governor to set the rules.

“This ‘yes’ vote today is going to continue to allow the governor to make these decisions in the dark, in back rooms without the public input that our founding fathers and so many people fought for there to be that deliberative process,” Candelora said.

Some public voices were heard during the debate. Residents opposed to mask and vaccine mandates gathered outside the Capitol building and some shouted into megaphones while lawmakers debated the extension. By mid-morning, residents had lined the sidewalk of Capitol Avenue. Others clustered behind metal barriers erected by police near the building’s entrance, hoping to catch the ear of lawmakers as they filed into the building.

Niantic resident Valerie Marcella was there with a handwritten sign reading “Vote NO.” She said the ongoing emergency declarations were inappropriate given the state posted a daily COVID positivity rate of 1.88% on Friday.

“We either have the best numbers in the country or we’re in an emergency. You can’t have it both ways,” Marcella said. “The representatives need to vote no and bring the power back to the people.”

Near the end of the debate, House Majority Leader Jason Rojas said the state had benefited from Lamont’s steady leadership. Rojas said he had “grown wary of the rhetoric” from opponents.

Under a law passed this year, a group of six legislative leaders has 72 hours to reject any order issued by the governor. So far, they have not opted to do so.

Lamont on Monday pointed to the need to manage the rollout of booster shots for the Pfizer COVID-19 vaccine which the Centers for Disease Control and Prevention recently authorized for people 65 and older, as well as those with pre-existing conditions and certain high risk jobs. He said emergency orders may also be required to administer vaccines to children younger than 12 if they are eventually authorized.

However, last week he said he had seen “a fair amount of anger and distress” associated with the public health orders.

“I’ve got to do a better job of trying to convince people these are not restrictions we get any joy in putting in place,” Lamont said. “These are things we’ve got to do to keep you safe. I just hope we can hold it together a little bit longer.”

The beginning of Monday’s debate was marked by a rare warning from House Speaker Matt Ritter who, responding to a largely unmasked public hearing held by Republicans last week, said he would end debate on the extension if lawmakers did not follow the chamber’s mask requirement.