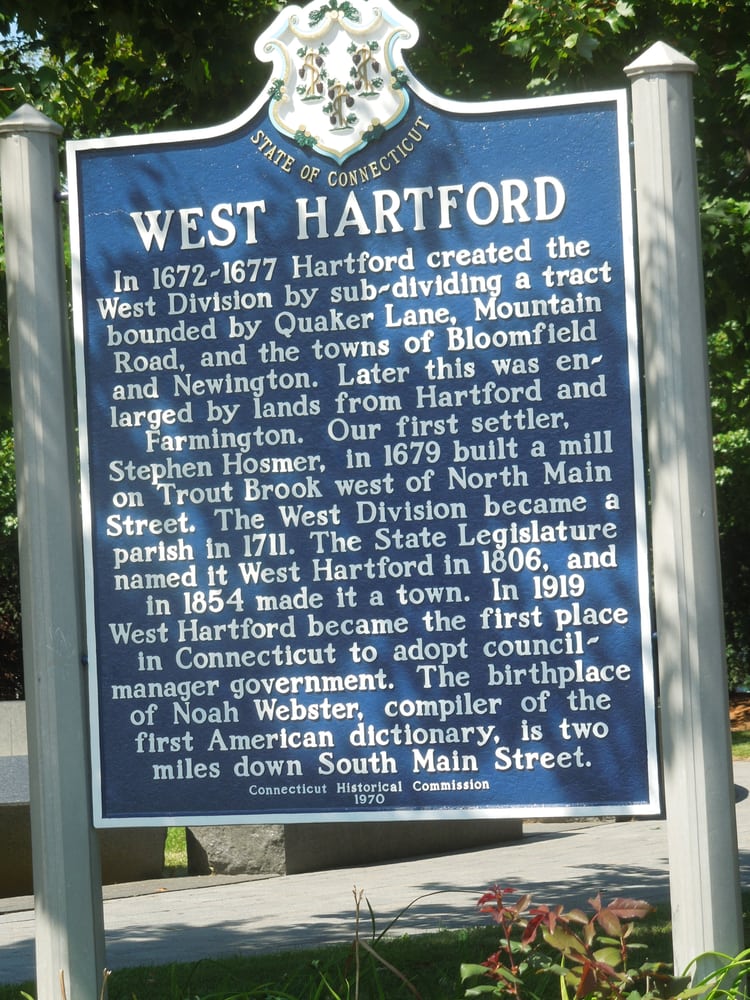 This is the third in a series of history articles provided by West Hartford Town Historian Tracey Wilson, as we all make our way through the pandemic of 2020. Wilson hopes the articles can provide a diversion, and invites comments by those who remember or know something more about the topic. Many will be excerpts from her 2018 book “Life in West Hartford.” 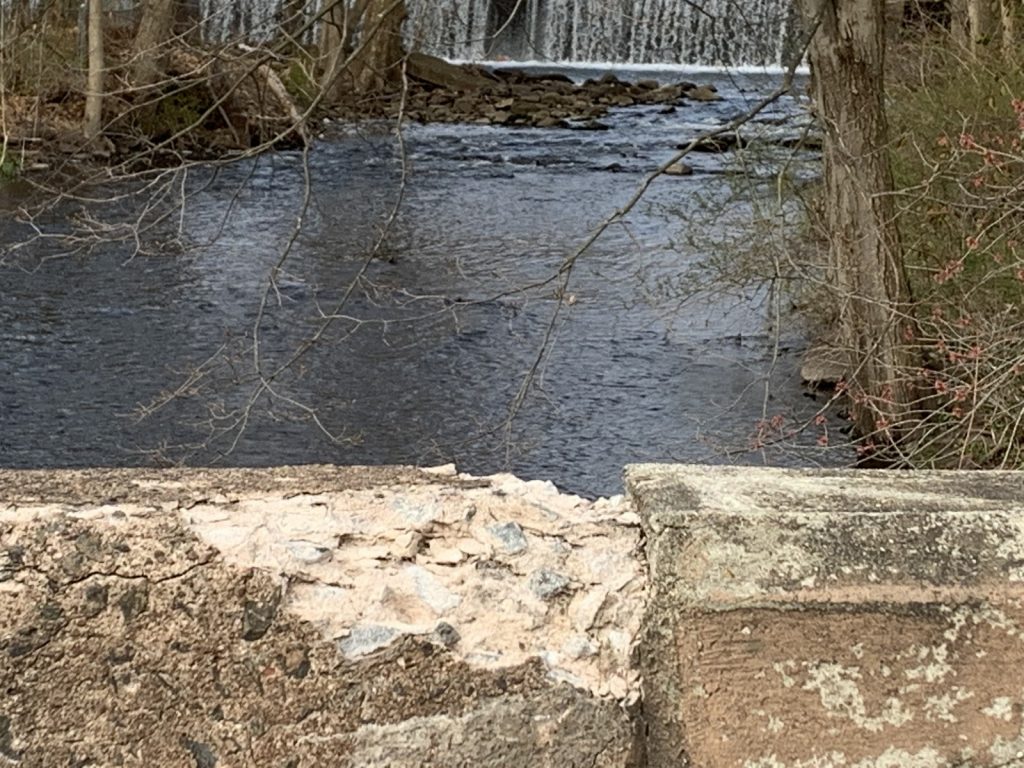 Site of First Hosmer mill on Trout Brook and the bridge that is being replaced. Courtesy of Tracey Wilson

This single sentence is found on the historical marker in the Veteran’s Memorial Park. It opens the story of an English-descended settlement in the West Division of Hartford.

Stephen Hosmer, financed by his father, built a dam, a grist mill, a house and amassed over 700 acres of land between Hartford, West Hartford, East Hartford, Windsor, and Rocky Hill. At least three generations of his descendants made the West Division of Hartford their home.

Thomas Hosmer 2 (1675-1732), the son of Stephen, the first English settler, died at age 57. His wife and six grown children inherited hundreds of acres of land in the West Division of Hartford, and four surrounding towns. Through his will, his wife and children inherited a yoke of oxen, two horses, a portion of a grist mill in Hartford, and a portion of the Hosmer grist mill in West Hartford.

His family members also inherited the people he enslaved: a negro boy, Hannibal, Hercules, Caesar, York and Simone. Legally, these captive people were inherited by his “heirs and assigns forever.” This transfer of wealth in land, animals, goods and people kept the Hosmer family’s wealth intact. The legal system supported this passing of wealth from one generation to the next. It supported slavery and maintained disparities in wealth. York and Simone were willed to Thomas Hosmer through his wife Anne Prentiss’ family. They were the children of York, an African captive and Rachel, an Algonquin. They were brother and sister who arrived in the Hosmer household at different times.

For Hannibal, Hercules, York, and Simone, they continued to be enslaved and they had to adjust to life under a new enslaver, albeit the sons of Thomas Hosmer II.  Son Thomas Hosmer 3 (1701-1777) inherited Hannibal and Hercules. Hercules died in 1761 at age 32, just three years after Thomas 3 inherited him. Hannibal died in 1780 as a free man, so it is possible Thomas freed him before his death.

Thomas’s widow Anne, who outlived her husband by 21 years, enslaved brother and sister Simone and York until her death in 1753. She willed York to her son, Stephen 3. Simone either died or was freed.

This transaction is found in John Whitman’s Account Book held at the Connecticut Historical Society. These 12 words, underscore the horror and cruelty of slavery in the West Division.

Did John’s ability to dehumanize this 9-year-old boy extend into other relationships in his life beyond those people he held captive? Where were Ned’s parents? Who would raise Ned? Where did he sleep?  Was there a child in the Hosmer or Whitman family that was about the same age as Ned? Were there other children who were enslaved in the West Division?

John Hosmer would have paid his account with Ned right after he got married in 1739. He and his wife had their only child Anne in 1743. His wife died soon thereafter.

Stephen Hosmer 3, brother to John and Thomas 3, inherited the man York and obtained Lew and Kate, maybe by purchasing them. He enslaved these three people who he held captive and he forced them to work for him and help care for his farm and the 17 children he had with his wife Deliverance Graves Hosmer.

When Stephen 3 died in 1758, his son George, (then 19 years old) inherited the couple Lew and Kate, valued at 90 pounds. West Hartford church records do not record any marriages between people who were enslaved, but Lew and Kate were probably a couple. The church records show “George (Hosmer) had negro servant Caesar, child of Lew, baptised May 10, 1763. The law ensured that children born to a mother who was enslaved, were enslaved as well. What were Kate’s emotions on bearing this baby into slavery?

I wonder if John ever questioned slave holding when his grandfather and his father were slaveholders. My hunch is he did not question holding people captive because his daughter Anne (1739 – ?) married her cousin George and they inherited Lew and Kate who had a child, Caesar.

This complicated family history, entwined with enslaving, inheriting, and prospering, makes me shift my gaze away from the first English settlers in the West Division. If this history is written from the point of view of people of African descent who were held against their will, it is a story of captivity, selling away of family members, and exploitation for the enrichment of  the slaveholders.

In fact, Hannibal, Hercules, York, Simone, Caesar, Ned, Lew, and Kate all helped to build this town. They most likely helped to build the dam, construct and run the mill, build the roads, take care of the animals, plant, weed, and harvest the crops, build stone walls, construct fences, make the meals, spin wool, make clothing, carry the water, raise the children, and build the houses and barns in which they were held captive.

How can our historic markers reflect this?

Want to know more? Join our online Witness Stones Community Project, which began April 8.  Check us out at https://sites.google.com/view/westhartfordctwitnessstones/home