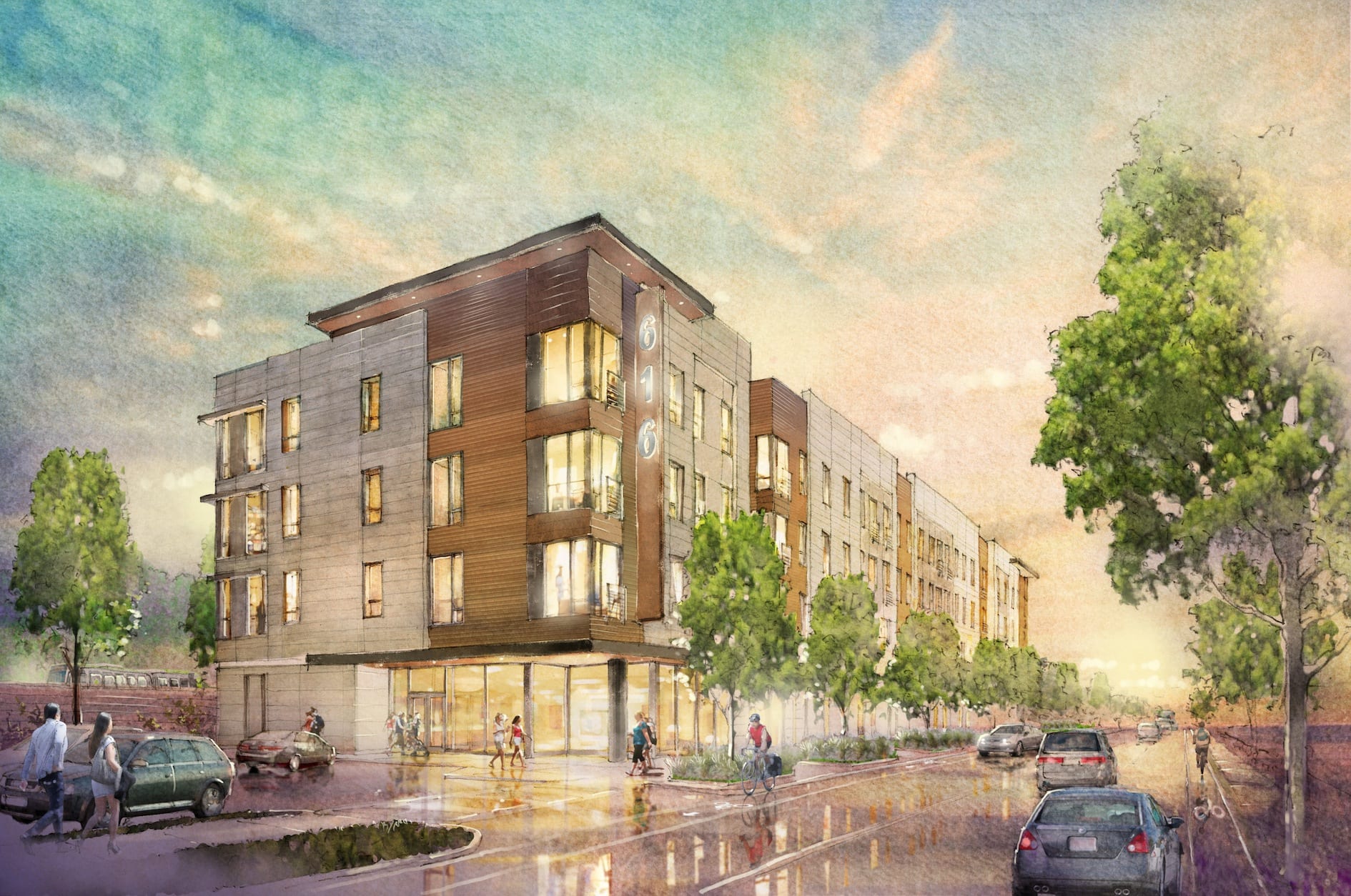 616 New Park, a striking mixed-use commercial and residential development planned by Trout Brook Realty Advisors, is one step closer to reality thanks to the approval of credits from the Connecticut Housing Finance Authority. 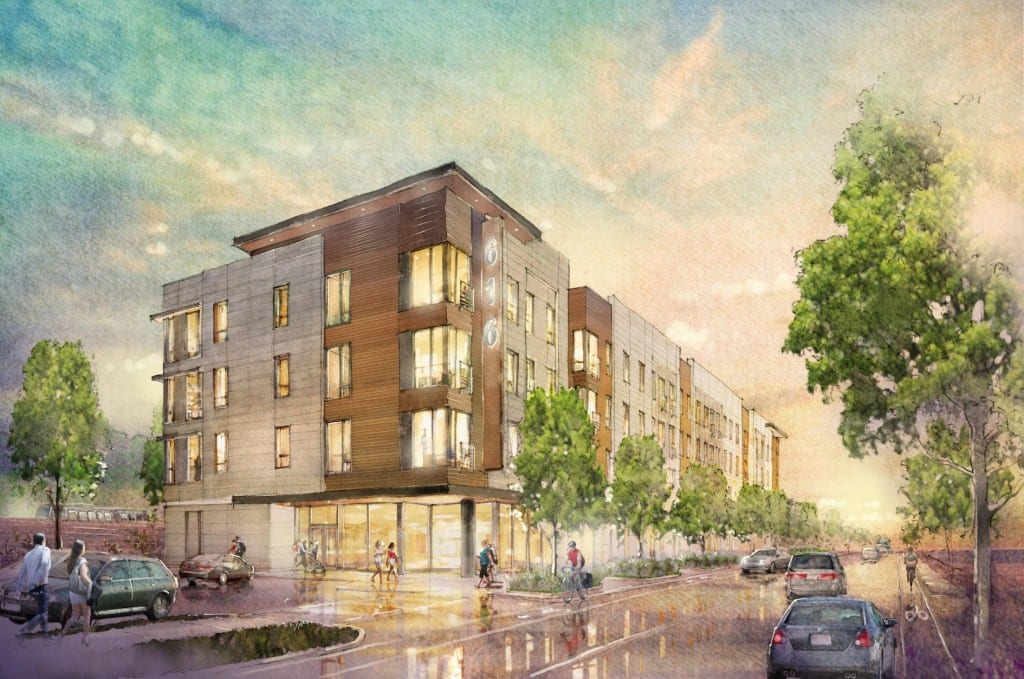 A project that will be one of the cornerstones of the transit-oriented development planned for the New Park Avenue corridor has taken a giant step forward now that a large share of its financing has been secured.

Federal tax credits of approximately $10 million from the Connecticut Finance Housing Authority (CHFA) authority, as well as approximately $5 million from the Department of Housing have now been secured according to George Howell, executive director of the West Hartford Housing Authority and CEO of Trout Brook Realty Advisors. The balance of funding for the $20 million project will be financed by a local bank, Howell said Tuesday.

“It is imminently more viable now,” Howell said 616 New Park, Trout Brook Realty Advisors’ proposed mixed-use development on the former Pontiac dealership site directly north of the Elmwood CTfastrak Station. “We were awaiting the approval of financing that was irrevocably critical to the project,” Howell said.

There were 19 developers that applied to the CHFA for the federal tax credits, and Trout Brook Realty Advisors was one of just six to gain approval. It was a competitive and objective selection process, with a variety of elements of each project receiving consideration, Howell said.

The location of 616 New Park was likely a major factor because of its proximity to the CTfastrak station – which will benefit both the residents who will live there as well as the CTfastrak system.

Howell said that the next steps including finalizing project elements and putting out requests for bids for the construction. He anticipates closing on all of the financing by the end of the summer. Construction is slated to begin in September or October, with completion planned for sometime in 2018.

Although additional neighborhood outreach will take place, there is no need for any zoning applications.

“This is a significant new piece of the New Park neighborhood. This is a game changer,” Howell said. It will be an anchor to the neighborhood, to the Trout Brook bike and pedestrian trail which is located right across the street, and will provide new customers for area restaurants and other businesses.

Trout Brook Realty Advisors wanted a the building to be beautiful and make a statement. “This will, by its very design and make-up, be iconic. The design is striking, and that striking design will make a difference on New Park Avenue,” Howell said.

This project is an economic catalyst – part of a whole effort to increase commercial and residential investment and development in the New Park area, Town Manager Ron Van Winkle said.

The Town Council changed the zoning about a year ago to allow for residential development in industrial zones, and Van Winkle said that has created the opportunity to effect real change in the area.

“This is a first step. Having this housing right next to the CTfastrak, residents can roll out of bed and get right on the bus,” Van Winkle said. CTfastrak has already proven to be successful, and parking spaces are at a premium, so there is clear advantage to living near the station.

The 54-unit mixed-use housing development will have commercial use on the ground floor, and will be a mixture of market-rate and workforce housing. There will be 32 workforce units that will be available to those with incomes “60 percent or less of area median income, or, based on 2016 figures, $36,780 for an individual and $52,500 for a family.” According to Trout Brook Realty Advisors, there will also be 11 units of “supportive housing” for veterans, and the remaining 11 units will be market-rate.

According to Trout Brook Realty Advisors, the units “will have an open feel with high ceilings, large windows, and open living-dining-kitchen area. Interior materials and amenities in the apartments will be fresh and modern including plank floors, stainless steel appliances, modern lighting/plumbing fixtures, and unique Juliet cable rail balconies.”

The building will also include amenities such as a fitness room, community gathering space including a flat screen TV and gas fireplace in the lobby, WiFi, an exterior gathering space with a fire pit, a dog walk area, and attractive landscaping.

The housing is expected to attract young, working professionals in their 20s and 30s.

“It’s exciting, and it’s a step in the right direction,” Van Winkle said. Projects like 616 New Park don’t happen overnight, and this one has been in the planning stages for a long time, Van Winkle said. “Hopefully this is a beginning of the significant transformation of the New Park neighborhood, bringing additional customers, residents, and businesses. Now we’re going to look for more,” said Van Winkle.

The Town of West Hartford has recently received a grant to conduct transit-oriented development planning in the New Park area, and will hold a “Planning & Design Workshop” on Wednesday, April 20, at Elmwood Community Center, Room 110, 1106 New Britain Ave. The workshop is focused on street improvements including pedestrian and bicycle accessibility. Those interested can drop in anytime from 2 – 8 p.m. to ask questions and share ideas.

On Monday, April 4, the Connecticut Department of Transportation held an open house in West Hartford also focused on transit-oriented development including market conditions, bicycle and pedestrian access, and parking in the area. Supervising Transportation Planner David Elder said that West Hartford has already been doing a good job at being proactive. Elder said that a report from the DOT will be forthcoming in a few weeks.

The mission of the West Hartford Housing Authority is “to create, preserve, and revitalize a wide range of housing and community development opportunities – from market-rate, to work-force, to affordable – that serve a diverse mix of households within Central Connecticut.” Trout Brook Realty Advisors, the developer for the West Hartford Housing Authority, recently completed The Goodwin at 189 Newington Rd. Its other properties include Elm Grove at 11 Grove St. and Alfred E. Plant at 759 Farmington Ave.