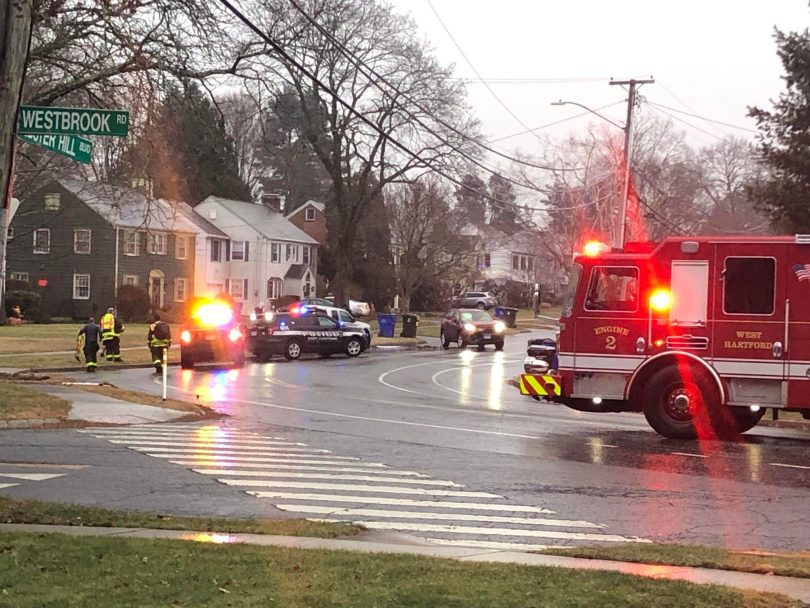 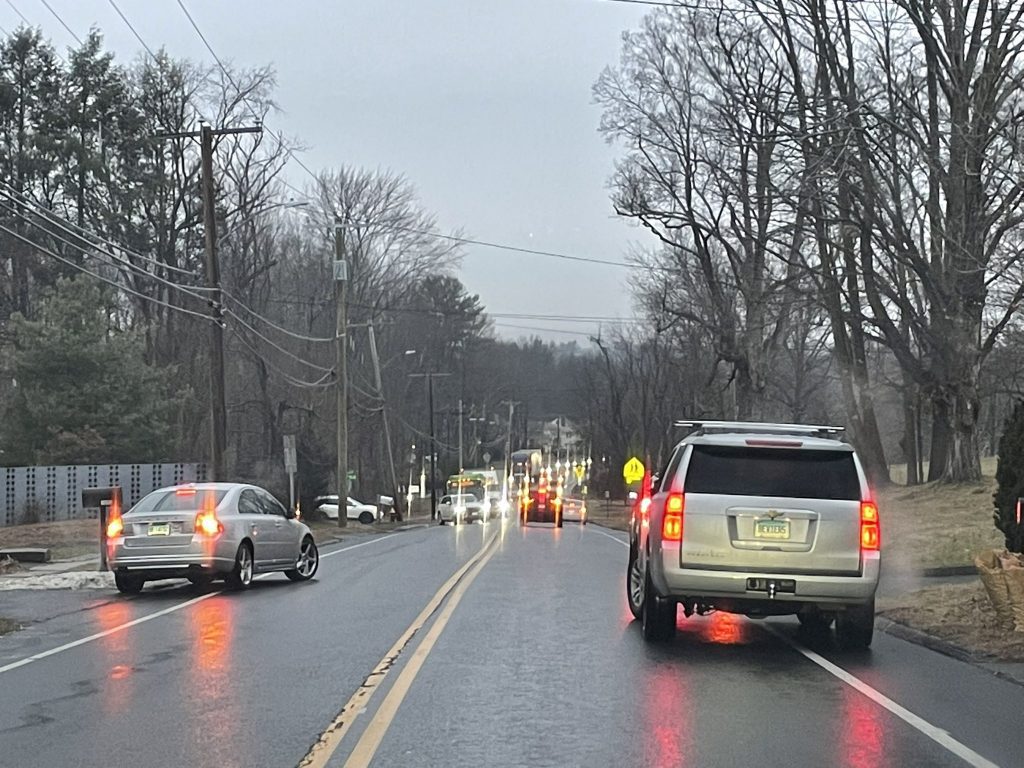 While meteorologists were predicting the possibility of freezing rain Wednesday morning, the timing and nature of the precipitation created a dangerous situation on the roads for anyone out driving, or walking, early Wednesday morning.

“It was the perfect storm of timing,” West Hartford Director of Public Works John Phillips said. The frozen precipitation didn’t begin in the area until between 6:30 and 6:45 a.m., he said.

Phillips had called in crews early, and although there were some individuals who called out sick there were trucks treating the roads, but salting doesn’t immediately solve the icing problem, he said.

“Salt only works when it creates a brine, so there’s a delay,” Phillips said. And the fine mist that was freezing as it hit the cold surface didn’t provide enough liquid to be effective quickly.

Some drivers failed to slow down enough for the conditions, causing wrecks, which then resulted in traffic jams, and the situation deteriorated quickly.

“I don’t care if you have a tan Cadillac SUV … you can’t barrel up the road when all the cars are stopped,” Sharona Kravitz said in a Facebook comment she shared with We-Ha.com, noting the lack of common sense being exhibited by many drivers Wednesday morning.

Many school buses, following instructions of their employer to pull over any time they are in a dangerous situation, decided not to take chances and stopped where they were. “No one can get around a bus,” Phillips said, noting that school buses are about the worst type of vehicle in icy conditions.

“Some of our trucks were sitting in traffic,” Phillips said, and that delayed their ability to continue salting the roadways.

“Based on the information we had this morning, we made the decision to start on time,” West Hartford Superintendent of Schools Tom Moore told We-Ha.com on Wednesday morning.

“The weather and road conditions turned rapidly, and made conditions impassable in some areas. I take the safety of our children and staff seriously, and made the wrong decision. The fault for the decision is mine, I understand why people are angry, and I hope that everyone is OK,” he said.

“I drove my high schooler in starting about 7:12 a.m.,” resident Gillian Workman told We-Ha.com. She said she learned to drive in Minnesota, and understands how to drive in wintery and icy conditions.

“Nonetheless, I was blindsided by how icy it was,” Workman said. “I saw the first school bus pulled over with hazard lights on near the back entrance of KP. I debated on trying Huron hill but there were few cars and I made it up and was able to turn onto [North Main Street]. On my way back, I stayed on [North Main Street] for safety and while waiting for a light behind two buses stranded on the side, the bus drivers were out walking on the grass. I let down my window. One stopped and said, be careful, it is all ice. As I passed by the buses, the first bus’s front wheels were turned on an angle suggesting a sliding stop.” 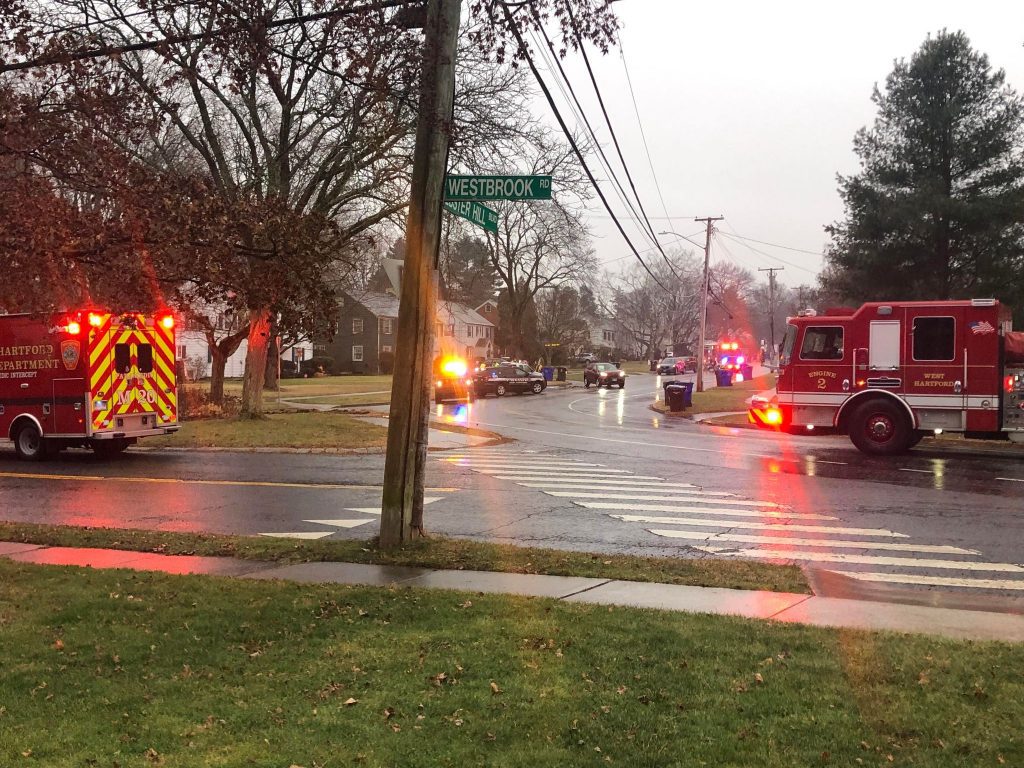 Lindsay Van Cleave lives at the corner of Webster Hill Boulevard and Westbrook. “I live on a curve and watched a truck slide to the outside into an oncoming car,” she said in a comment on Facebook that she shared with We-Ha.com. “I then watched the approaching police car slide into the accident. I thought the fire truck was going to join the pile. Woah.”

West Hartford Police did have any information about a police car being damaged in the Webster Hill incident, but Sgt. Amanda Martin confirmed there was a crash involving passenger vehicles at 30 Webster Hill Boulevard, one of at least a dozen incidents to which police had responded Wednesday morning.

“So far we have responded to (12) accidents and there have been no reported serious injuries,” Martin said in an email at 9:30 a.m.

There were some roads that had to be closed temporarily while tow trucks removed damaged vehicles, but no permanent road closures in town, Martin said. Traffic has backed up at many intersections and at crash sites, she said.

“During the morning hours of Jan. 5, 2022, the West Hartford Police Department responded to numerous calls for service including motor vehicle accidents, disabled vehicles, and hazardous conditions in regards to the icy conditions that impacted the state,” West Hartford Police Capt. Eric Rocheleau said in an email Wednesday evening updating the status of incidents.

He said that over the course of Monday morning police had recorded 36 crashes with property damage only, and three that involved minor injuries.

One of the crashes with injuries occurred at 1200 Trout Brook Drive, and involved a Connecticut Department of Motor Vehicles Police vehicle. Rocheleau said several people involved in that crash were transported to area hospitals for evaluation or treatment.

One of the incidents involved a West Hartford Fire Department fire truck that sustained minor damage, but there were no injuries resulting from that crash, Rocheleau said.

“Another accident involved a CT Transit bus striking a Frontier Communications pole which caused damage to the pole. There was also one accident involving a school bus. There were no students on the bus and no reported injuries,” Rocheleau said.

Phillips said one of the worst situations was at the s-turns on Trout Brook Drive between Fern Street and Asylum, where traffic was totally stopped amid crashes, including the one that involved the DMV vehicle. That led to tie-ups on North Main and other alternative routes.

Not all of the crashes were properly reported to police, however. “Our car was hit during this morning‘s ice storm and the driver left the scene in West Hartford,” one reader told We-Ha.com in an email. “People should report accidents to the West Hartford Police Department, or at least leave a note on the drivers windshield. We recognize that if this accident is investigated, the driver could be charged with evading responsibility, which would result even in a bigger problem for the driver,” she said. That damage occurred to a gray Honda Civic that was parked on Ridgewood Road, facing northbound, between Tunxis Road and Sedgwick Road.

According to Rocheleau, overall there were three incidents that involved evading, none of which included injuries. 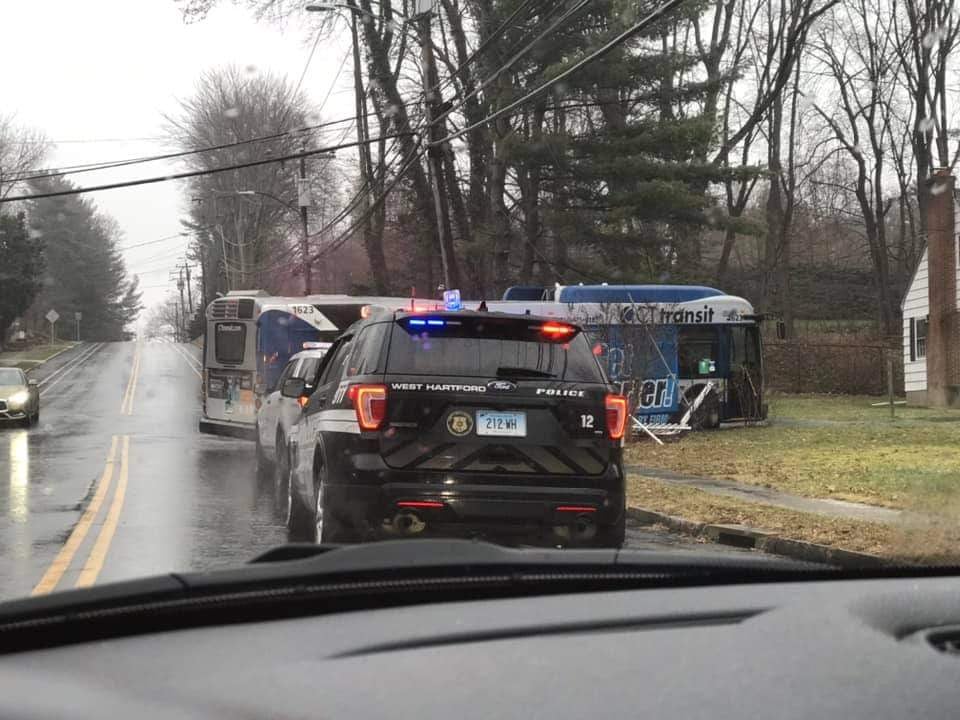 A CT Transit bus crashed into a fence at the corner of Steele Road and Fern Street on Wednesday morning. Photo courtesy of Nastajha Ortiz

Nastajha Ortiz, who shared the above photo of a CT Transit bus that had crashed into a fence at the corner of Steele Road and Fern Street, also reported seeing a school bus spin out on North Main Street and Brightview Drive in Bishops Corner at approximately 7:20 a.m., causing a crash and backing up traffic in the area.

Allison Rowlson, who lives and teaches in West Hartford said when she left her house with her boys to go to school this morning, “We basically slid to the car in the driveway and I made the decision to turn everyone around and head back inside. Totally not worth it. I called (my) school and told them I’d be late, as well as my middle schooler, and we waited it out about another hour before trying again.”

They made it to school two periods after school started, but safe and sound, she said.

Patti Albee, the administrator of the Neighbors and Friends in West Hartford Facebook page, started a thread this morning about the icy conditions. It took her daughter more than two hours to get to Hall. “Left house at 6:50, got to ASD around 7:10/15 and stayed stopped until around 7:45 made it to Hall at 9:25. So about 1 1/2 hours down Main Street from ASD to Hall. (2 miles),” Albee said.

By the time the precipitation started falling and the roads began icing, it was too late to delay West Hartford Public Schools. Moore said that “once buses start rolling we can’t have kids get to school and not have anyone there. Too many walkers, early drop offs to be able to delay once we get past 6:45,” he told We-Ha.com.

“By 7:30 a.m. we had all of the arterial roads done,” Phillips said, and while the air stayed cold longer than predicted, once the rain began to fall harder the treatment started working better. “It takes time to melt the ice,” he said.

“Our buses are running late this morning due to the unexpected icing on the roads,” Assistant Superintendent Andy Morrow said in a letter emailed to West Hartford Public School families just after 8:30 a.m. “I apologize for this and ask for your patience as the rain’s shift was quick and not anticipated to have this level of impact on our region. If we had known we obviously would have delayed our opening. The Town has mobilized treatment trucks and continues to assist where needed, as we are doing our best to getting everyone to school safely.”

Northwest Catholic decided to delay the start of school until 9:50 a.m., but made the announcement around 9 a.m., about an hour after school was set to begin. “In the morning we didn’t realize it would be freezing rain,” Elizabeth Figueroa, NWC’s director of communications said. Due to the traffic, very few people had arrived by that time, she said, and those who were there stayed in their first period or advisory classes until the official day began.

While traffic was at a standstill on North Main Street, there was no truth to a rumor of a NWC student having crashed into a teacher.

Multiple crashes dotted highways throughout the region, including one reportedly involving numerous vehicles on I-84.

The Connecticut Department of Transportation also noted in a tweet just after 10 a.m. the “perfect storm” of bad timing for Wednesday morning’s precipitation.

Freezing rain is not like snow and ice ❄ this event was a Perfect Storm: too cold yesterday to lay down liquid pre-treatment & too💨 windy ahead of the weather to pre-treat with hard salt. We’re out there across #CT. When you see us, give us room to work. ⚠️ pic.twitter.com/ymYoiWXfH3

“The remnants of a cold front are sitting just to our south creating enough instability in the air to allow these little light showers to fire up,” said John Lyons, who has become known for his accurate local weather forecasts.

“Because of the proximity of that front, the air aloft is milder than the air down at the surface, so what fell as rain immediately flash froze as soon as it hit the ground,” Lyons said Wednesday morning. “Finally, the timing could not have been worse as it hit with a little warning just before morning commute.  Alerts only went up at approximately 3:45 a.m.,” he said.