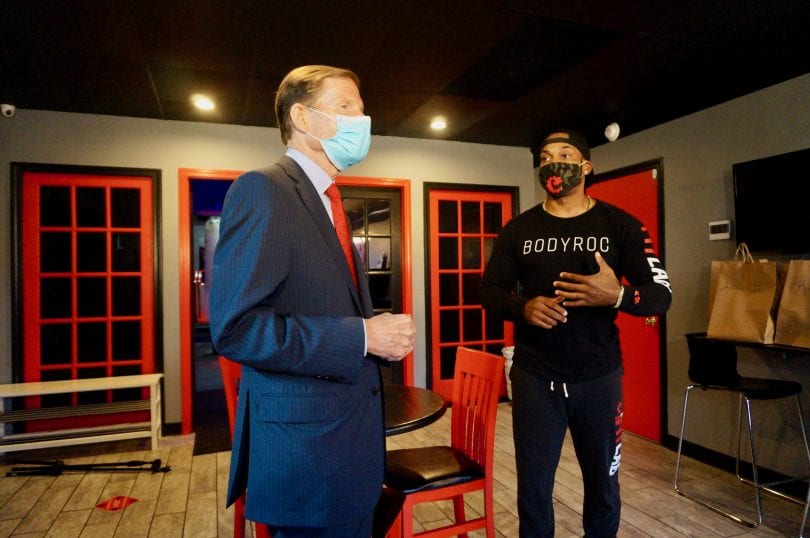 U.S. Sen. Richard Blumenthal has been visiting Black-owned businesses across Connecticut, and was in West Hartford Tuesday to learn more about how Shaun Chambers, owner of BodyRoc Fit Lab, fared during the pandemic and reopening. 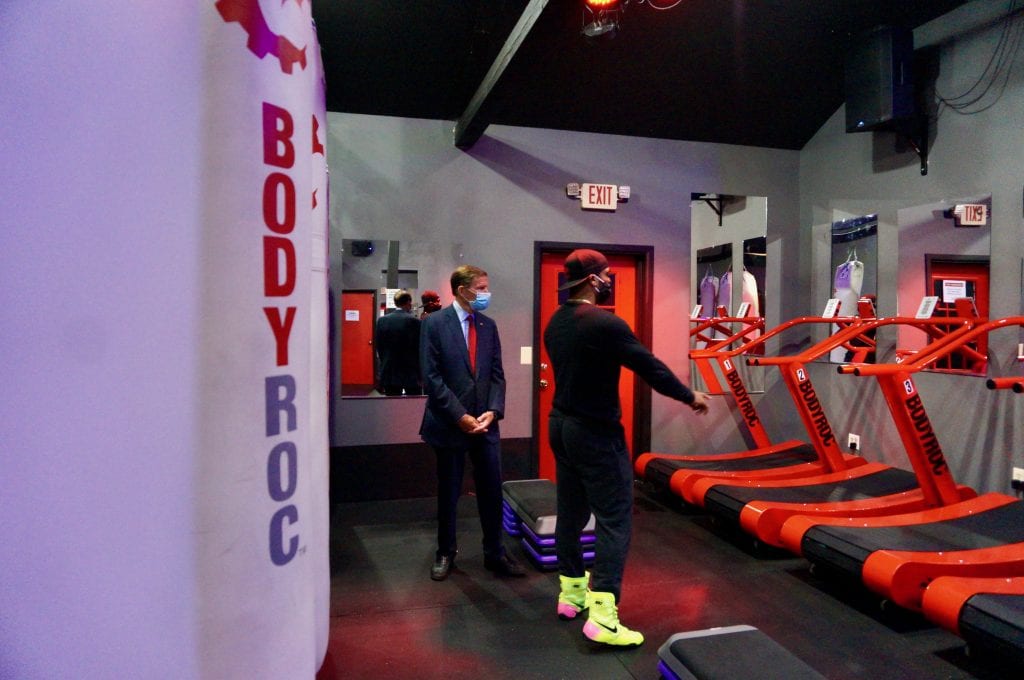 Shaun Chambers has poured his heart and soul – along with plenty of blood, sweat, and tears – into the business he launched in West Hartford in 2015 – and like many other entrepreneurs, he is struggling.

U.S. Sen. Richard Blumenthal paid a visit to Chambers’ BodyRoc Fit Lab in West Hartford Tuesday morning, part of a a series of visits he is making to Black-owned businesses throughout the state. He spoke with Chambers about how the boutique fitness studio managed through the months they were closed due to COVID-19, and how the reopening has been going thus far. 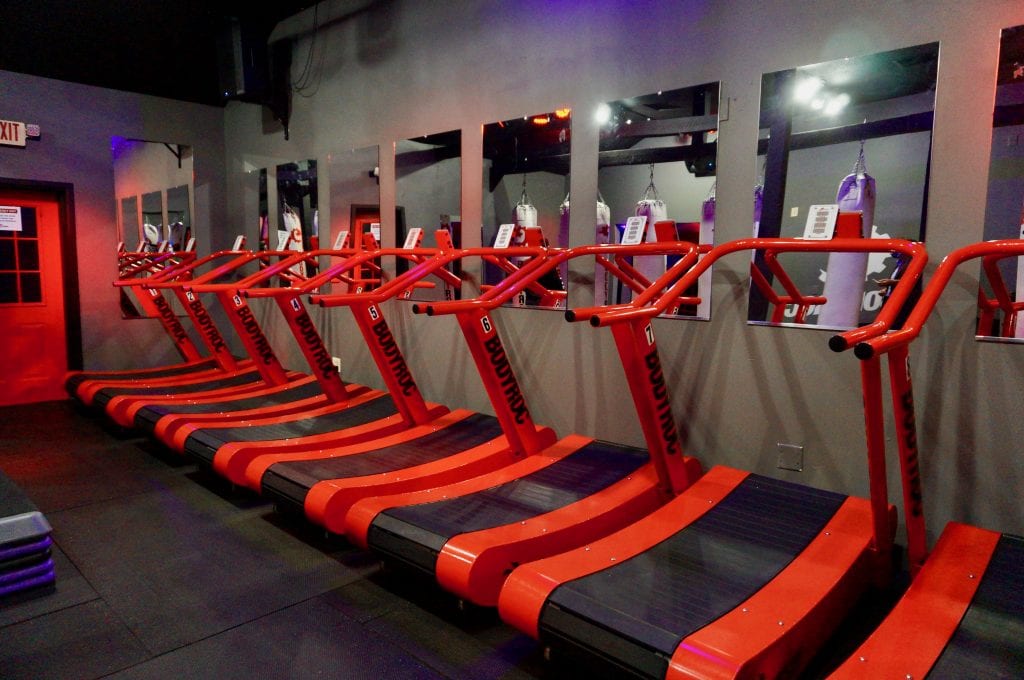 BodyRoc Fit Lab has reopened at 641 New Park Ave. in West Hartford, but at 50% capacity and with assigned equipment for each class participant. Photo credit: Ronni Newton

As a small fitness studio, BodyRoc has always operated on an appointment only basis, which helped with the new protocols requiring 50% capacity. “We know exactly who is going to be here, what time they need to be here, which makes it easier for us to cut down the traffic in the studio,” Chamber said.

Other operational changes are more significant.

There used to be seven 50-minute classes a day, but they have had to significantly increase that – which has increased payroll – due to the decreased capacity in classes that had 20 participants and can now have just 20.

Members pay $160 per month, and “they get frustrated when they can’t get into the class,” said Chambers, because it’s really hard to get into the sought-after before- and after-work times.

Classes which were 50 minutes are now about 35 minutes so that more can be scheduled, as well as to accommodate the necessary level of cleaning between classes. The cleaning regimen was really intensive before, Chambers said, “but we have intensified it even more,” with the use of Permasafe and Ecolab products.

We not only clean the weights, the benches, the floor, but also the heavy bags, the doorknobs, the treadmills, the chairs, the surfaces of the counter, the music –  “everything that’s touched,” said Chambers. 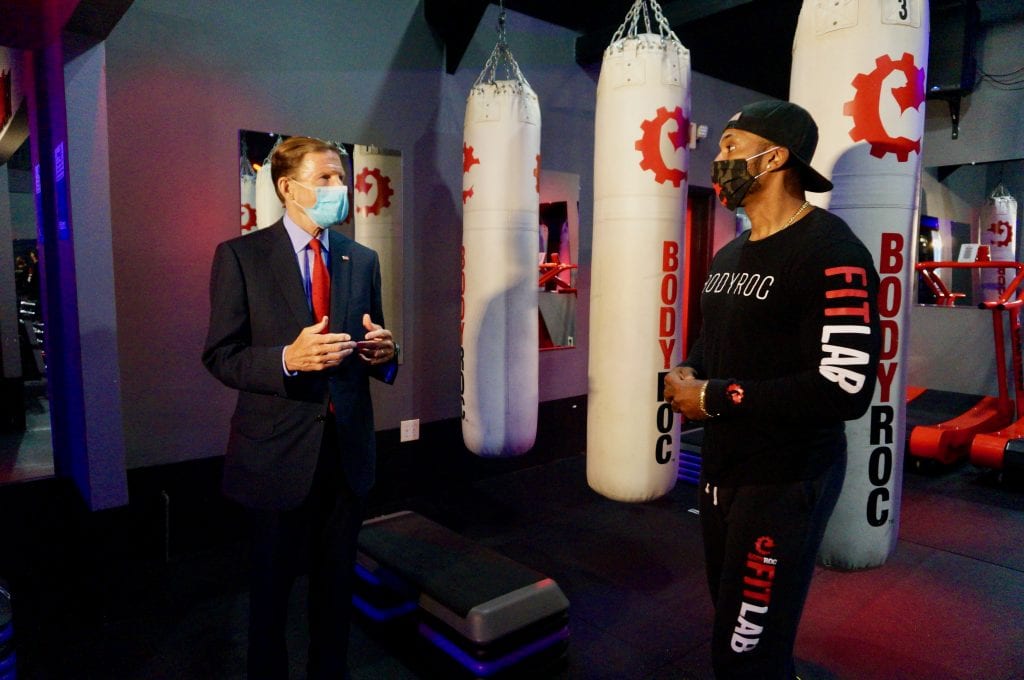 Everyone is now  assigned their own equipment – a heavy bag, bench, and a treadmill. Only every other treadmill in the space can be used to ensure 6 feet of distance.

“We give everyone a number when you come in,” Chambers said, and that corresponds to the piece of equipment they use. Members leave their weights on the bench when done with that portion of the class, and nobody else gets to use those weights until they are cleaned.

Chambers said he arrives at 4-4:30 a.m. to prepare for the first class of the day. There are no showers at the West Hartford location, and while they do have showers in Avon, they aren’t permitted to be used right now so people have to build in time to go home and shower before work, making class scheduling even more complicated.

“You have to come in wearing your masks,” said Chambers, but there is no need to wear them while working out. Trainers wear masks at all times, and temperatures are taken when people arrive. Those who have been traveling are asked not to return to the studio until they have completed a quarantine period.

“Do you ever turn people away?” Blumenthal asked. Chambers said it hasn’t had to happen yet.

“Everyone has been very careful about following the rules, which I think is why we’ve gotten over the worst so far and the danger is that the rates of infection in these other states is going to boomerang back to us,” Blumenthal said, adding that exercising is so good for people.

Chambers said fitness specialists know the positive effects that exercise has in the ability to fight off infection, and that’s made it even harder to have this downtime. “We’re working at a minimized capacity to do so. … It causes stress in more ways than one.”

Memberships were frozen during the time the studio was closed, Chambers said, and they have been willing to keep them frozen for those who don’t feel comfortable returning yet. Some members willingly continued to pay their memberships during the closure as a donation, for which he is very grateful.

The studio previously had a DJ – and in Avon there is a dedicated stage – but that would be one more person taking up a space in the facility so that element has been suspended for now.

“This COVID crisis has affected our business in so many ways – the energy, the camaraderie, the synergy among people … it’s what drives the workout experience, when we turn the lights down, you have the red lights going and things are glowing and people are feeling good. … That’s what makes people come back.”

The current experience is not what they signed up for, Chambers said. “It’s not what I created.”

“We have no choice. I’ve been doing this for 10 years.” “I’ve put my blood sweat and tears, every ounce of energy, every ounce of strength, all my money into my business. BodyRoc is not a’ thing’ … I created it.” He had to educate the public about what it is, to show why the experience is valuable.

“To have it just start to disintegrate at no fault of my own … it’s heart-breaking. I have a lot of fellow entrepreneurs saying the same thing. … The best we can do right now is just cry on each other’s shoulder.”

The total payroll has increased due to need to have the extra sessions, but BodyRoc’s total number of staff is down from 15 to 12. “It’s been a tough process, especially after the shutdown, getting people to come back because they were making more than they were making as trainers from the government assistance,” Chambers told Blumenthal.

He applied for and received a Payroll Protection Program (PPP) loan, “but now I have to fight for my people to take it,” Chambers said.

The studio’s expenses are higher than they were before, double or triple – while having to operate with just 50% capacity.

“It’s a struggle but we’re doing the best we can,” Chambers said.

Blumenthal commended Chambers for keeping going while many other small businesses, particularly Black-owned small businesses, have gone under. “This PPP program … those amounts are not going to carry you through this kind of period.”

Chambers said he got the money through the PPP while he was closed, but was paying his employees for doing nothing, not when they are operational. “I was happy to get a lifeline, but it did nothing.”

Working with his accountant he was careful to use the PPP funds as specified, and by the time it was extended, he had already used up all of the money he had received. Now he has more classes, and more payroll.

According to Blumenthal, there is still $130 billion in PPP funding available. “Maybe we can repurpose it so that it’s now available to businesses like yours that are now in operation.”

Re-marketing is more important now than it was before, Chambers said, but the message needs to be about the cleaning process, the system to keep people safe and keep the facility healthy, rather than about what they offer as a business.

“People just want to know that they are coming into a safe place to work out,” said Chambers. “It’s not so much what you’re doing anymore.” The revenue isn’t being generated to get that marketing message out. It’s hard enough to get people to commit to a workout program, and now there are so many more issues they are dealing with.

“We’re struggling as a small business. We’re blessed to have a very supportive community here at BodyRoc Fit Lab, and a team that’s willing to stick with us until we figure it out, but we’re really strapped for cash,” Chambers said, and holding onto what they have for dear life.

“The issues are compiling and we have to be even more resilient as entrepreneurs.”

While closed “we did everything” to keep people involved, Chambers said. “We did meal plans, at home workout plans, live video feeds – everything that we possibly could to keep our people engaged so they wouldn’t lose momentum.” It can take people up to a year or two just to get into the groove, and then being home, stagnant, under stress, eating bad food, makes it difficult, he said.

“I admire Shawn tremendously for hanging in there,” Blumenthal said. “To keep his business going under these kinds of enormous financial pressures and emotional stress … is a real struggle. I’m going to be very blunt: Black-owned businesses are going under at a much higher rate than white-owned. Black-owned businesses disproportionately have closed their doors during this pandemic,” he said, citing a National Bureau of Economic Research report that indicated nationally there has been a 41% decline in the number of Black-owned businesses since the pandemic began.

They have had a tougher time accessing the finances, Blumenthal, and small businesses in general have had lack of access.

“The latest data released by the Treasury shows very very troubling questions about where this money was distributed,” Blumenthal said. “Smaller business, desperate for this funding, have encountered obstacles that the larger businesses never found … so we need to make sure BodyRoc, Shawn and his kind of business, receive  more of the funding.”

A business like BodyRoc provides a vital service, one that improves physical and mental health, Blumenthal said.

“The government needs to do better,” Blumenthal said, especially for Black-owned businesses which are disproportionately affected, “just like the communities of color are disproportionally hit with this pandemic.”

Blumenthal said he plans to share this picture with his colleagues in the Senate, and tell them, Sen. Majority Leader Mitch McConnell specifically: “We are AWOL unless we act and act now to help these small businesses. They provide most employment in our nation. They are the job creators. We need to make sure all small businesses are given more assistance, plus state and local governments, our hospital and healthcare system, and a myriad of needs that are colossally urgent and catastrophically we have failed to meet.”

Chambers said he knows businesses that have had to close their doors. “Entrepreneurship is a brotherhood; we all understand each other’s pains … They’ve given it everything and now they have to start over.”

Blumenthal said this small business is kind of the poster child. “Shawn has poured his heart into this business. He’s given it his life … he’s provided just extraordinary service to people whose lives would be lessened if they couldn’t come here and work out and now he’s on the precipice of disaster through no fault of his own. … Now is the time for my colleagues at the Capitol to do something to aid businesses like Shawn.” 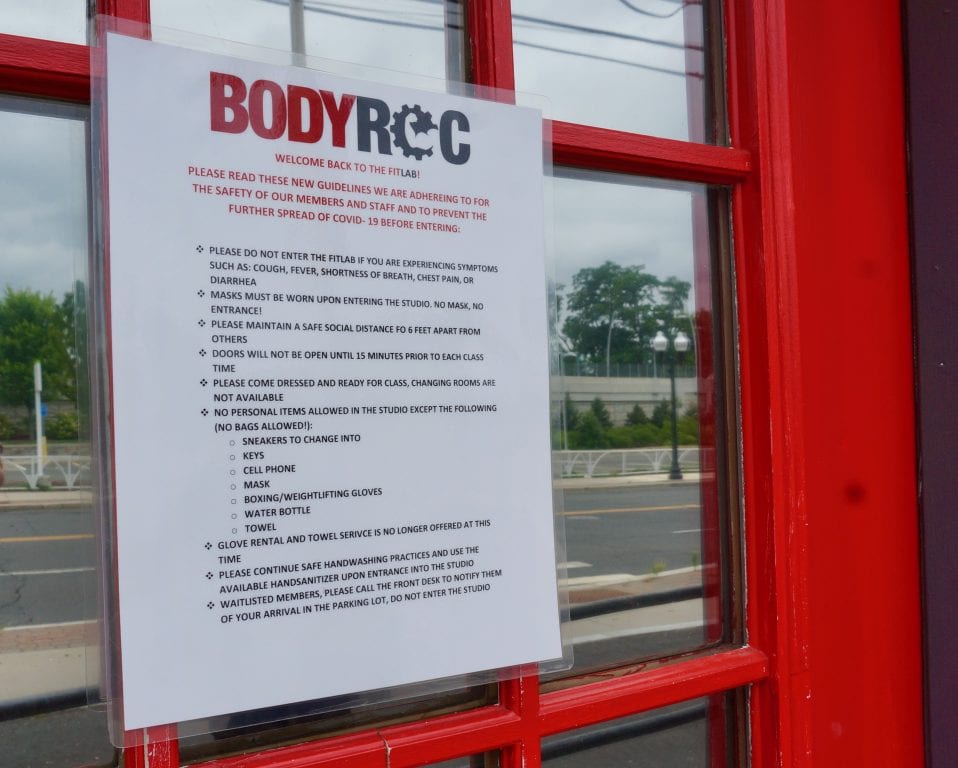 Requirements for entry and class participation are posted on the door of BodyRoc Fit Lab at 641 New Park Ave. Photo credit: Ronni Newton 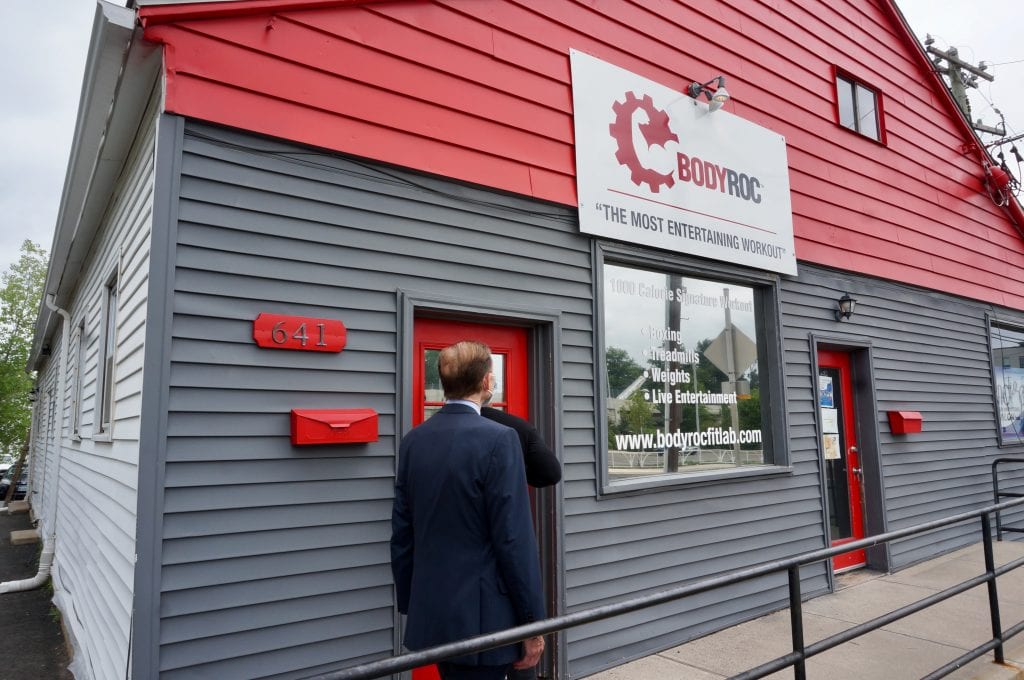