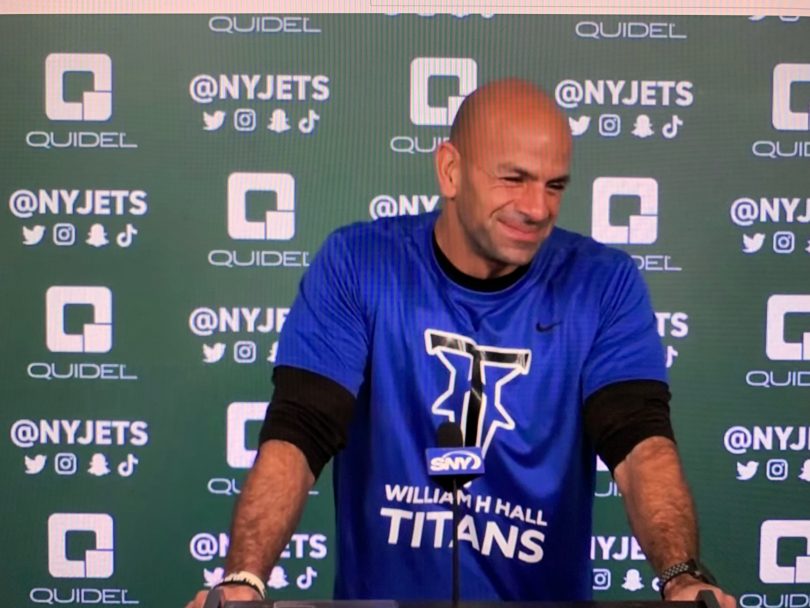 Hall High School football coach Frank Robinson has been around football for his entire life, but Friday’s experience was a new one.

“It is cool, but really the kids are the ones deserving of this,” Robinson said of being named “High School Coach of the Week” by the New York Jets.

Social media in West Hartford immediately started buzzing when Jets head coach Robert Saleh appeared on-screen for a press conference Friday morning to speak about the team’s preparation for Sunday’s game vs. Green Bay. Saleh was decked out in a “Hall Titans” shirt.

“Your shirt?” asked a reporter during the press conference.

“So we’re recognizing Frank Robinson, Hall High School. They had a big win last week against a team that was previously unbeaten,” Saleh responded. “This is a cool one. He graduated from there 35 years ago. He quarterbacked the team and his dad also coached there for 30 years,” Saleh said of Frank Robinson III, whose father, Frank Robinson II, Hall’s coach from 1957-1987, who died at age 91 in 2015.

“A lot of lineage and tradition for that family, so good luck to you and your football team,” Saleh said.

The mention of Hall begins around the 13:30 mark of the YouTube video which can be seen below.

“They’ve put in the work and persevered,” Robinson said, and beating previously-undefeated Glastonbury on Oct. 7 was a great effort by the team.

Robinson said he hadn’t previously heard of the honor, and doesn’t know how he was nominated.

Robinson will be honored on the field at MetLife Stadium when the Jets host the Detroit Lions on Dec. 18, and the team and other coaches will also receive tickets to that game to support him.

According to the Jets’ organization, each high school coach of the week receives a $2,500 donation to benefit the school’s football program. The team also receives an automatic bid to compete in the 2023 New York Jets 11-ON Tournament, the Jets website states.

Robinson laughed when asked how Saleh obtained the Hall Titans shirt. The logo is new, and he couldn’t get a shirt made and set to Saleh in time for the press conference – so they Jets organization created their own. Robinson it looked good – and may just be the design for new t-shirts for the team.

“It’s an honor for all of us, for everyone in West Hartford,” Robinson said. “I just happen to be the head guy.”