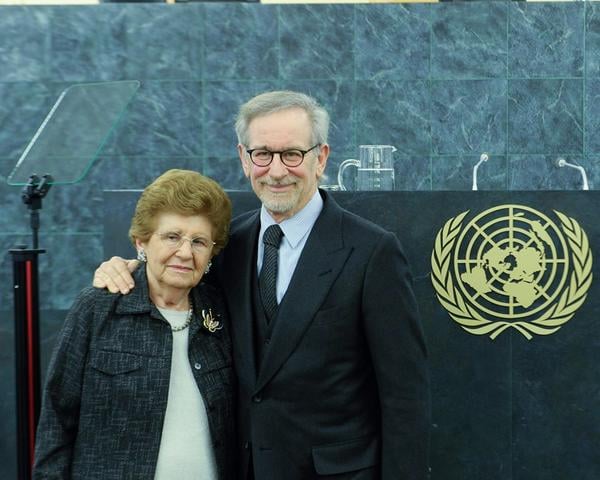 Giving Circle will host a virtual talk with Holocaust survivor Renia Finder, author of ‘My Survival: A Girl on Schindler’s List,’ hosted by her cousin and JewGood Committee member Devorah Donnell of West Hartford.

Young professionals in Connecticut can find out how Oskar Schindler helped Renia Finder and her mother survive the Holocaust during a virtual talk, May 1 at 2 p.m., hosted by JewGood Hartford, a giving circle for young professionals of the Jewish Community Foundation of Greater Hartford. The event will commemorate Yom Hashoah, Hebrew for Holocaust Remembrance Day, established in Israel in 1959 as a solemn day of remembrance, education and mourning for the six million Jews murdered by the Nazis during World War II.

During the talk, Renia, 93, will provide her firsthand gripping story of survival, perseverance, tragedy, and hope. Renia was only 11 when the Nazis forced her and her entire family – along with all the other Jewish families – into the ghetto in Krakow, Poland. Renia and her mother ended up working for Oskar Schindler, a businessman credited with saving 1,200 Jews from extermination by the Nazis by hiring them in his factories and bribing Nazi officials.

“Renia has been speaking and teaching about her experiences in classrooms, universities, and even at the UN, since the 1980s,” says Devorah. “It means so much to me to be able to share my family’s story.”

Young professionals in Connecticut who sign up by April 20 for Renia’s talk here will receive a Zoom link and free copy of Renia’s book, “My Survival: A Girl on Schindler’s List.”