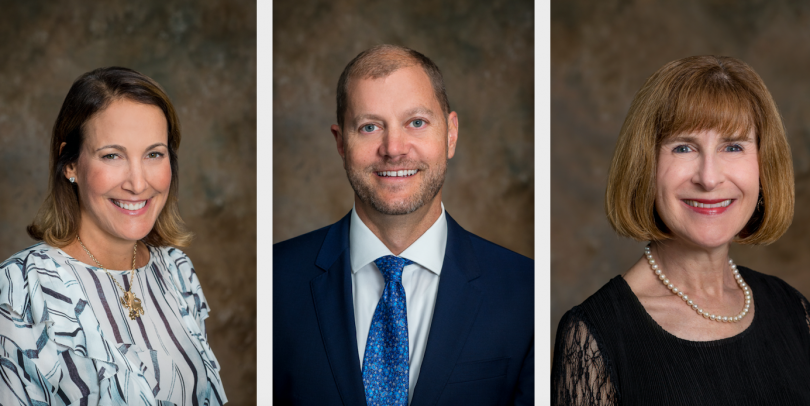 The Jewish Community Foundation of Greater Hartford has elected three new trustees, two of whom are from West Hartford.

Three new trustees have been elected to the Board of the Jewish Community Foundation of Greater Hartford (JCF). David Miller, Investment Committee Chair, presented the nominations at JCF’s recent annual meeting. The Board voted and approved the following community leaders as Trustees:

Carolyn Gitlin, of West Hartford, is an active philanthropist and community advocate.

Gottfried is an active volunteer in the Jewish Community. He serves on JCF’s Investment Committee. He also is an active member of Beth El Temple of West Hartford, where he currently serves on their endowment committee. He previously served four terms as a trustee on their Board. Gottfried is also a current member of the Planning and Allocations Committee for the Jewish Federation of Greater Hartford.

Gottfried graduated from Muhlenberg College and The Loomis Chaffee School.

Elysa Graber-Lipperman, of West Hartford, is an attorney practicing in the areas of Estate Planning and Probate Administration.

She earned a B.A. with distinction in all subjects from Cornell University, and was awarded her Juris Doctor degree with honors from The George Washington University Law School. Graber-Lipperman also was awarded an LL.M. in Estate Planning and Elder Law from the Western New England College School of Law.

The Jewish Community Foundation of Greater Hartford (JCF) was founded 47 years ago with an initial gift of $50,000 and has now grown to more than $120 million in assets. JCF, a proud partner to the Jewish Federation of Greater Hartford and a member of the Connecticut Council for Philanthropy, is the fourth largest charitable community foundation in Connecticut. JCF offers an array of options for every size of charitable investment, which includes family giving, donor advised funds, social impact opportunities, and Jewish funding options.