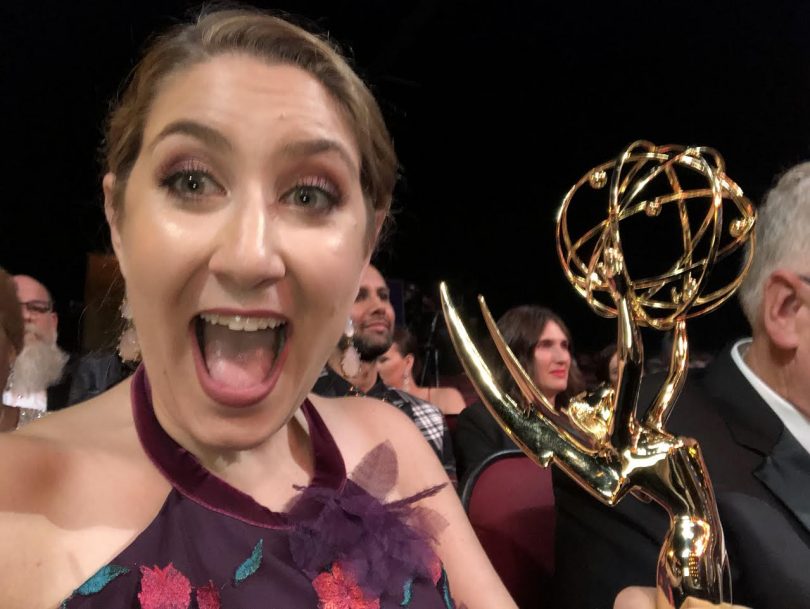 A West Hartford native and graduate of Hall High School, who happens to be Jewish, won an Emmy for her work on “Jesus Christ Superstar.’ 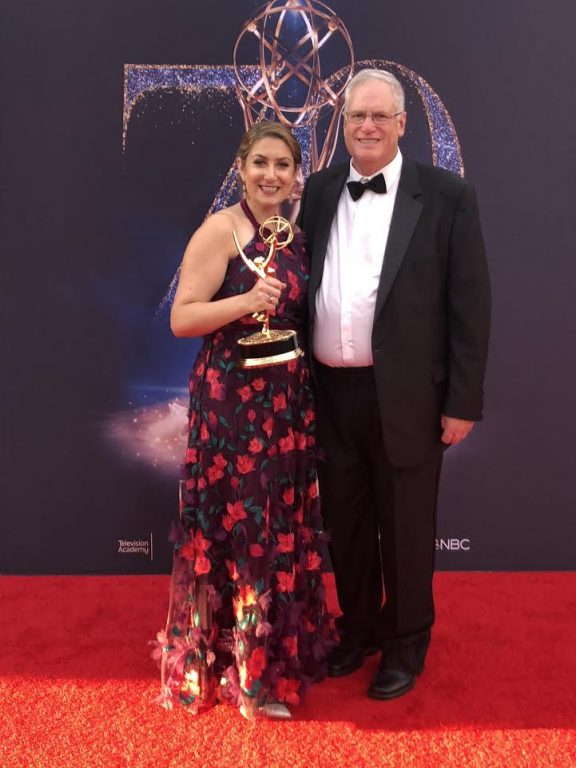 Melissa Shakun and her dad, Harlan, at the Emmys. Courtesy photo

For Melissa Shakun it started at her Bat Mitzvah and ended last week in Los Angeles.

A West Hartford native and 2001 graduate of Hall High School, Melissa Shakun won the 2018 Emmy for her work as Art Director on the NBC special “Jesus Christ Superstar Live in Concert.” The 2018 Emmy was awarded for Outstanding Production Design For A Variety Special. The show won five awards at the Creative Arts Emmys ceremony held Sept. 9 in Los Angeles.

Melissa has worked as art director for a variety of TV shows including “The Americans,” “Mysteries is Laura,” “The Jim Gaffigan Show,” and “Difficult People.” She has also been fortunate to work as an associate or assistant set designer on six broadway shows including “Shrek” and “Bye Bye Birdie.”

“Jesus Christ Superstar Live in Concert” was the first project that combined two of Melissa’s passions – TV and musical theatre.

“What a way to get this beautiful format of musicals on TV and to be able to reach a national audience,” said Shakun. “I’ve always loved theatre. My Bat Mitzvah theme was Broadway musicals, every table was a different Broadway show.”

As for the Emmy experience? “It was incredibly surreal,” Shakun said.

“It was very special to be able to share this moment with my dad. He has been by my side and supportive of this adventure in the entertainment industry,” said Shakun.

And who screamed louder? “Me! I definitely have my mom’s personality.”

“My mom passed away 19 years ago. I miss her every day. I thank her for sharing with me her zest for life and love of musicals. I think that she would be over the moon about this award,” Shakun said.

The Creative Arts Emmys were handed out at the Microsoft Theater in Los Angeles with the awards being presented by the likes of Bryan Cranston, the Fuller House cast, James Corden, Jane Lynch, Lisa Kudrow, Molly Shannon, Padma Lakshmi, RuPaul and the hosts of Queer Eye.

Ending her interview Shakun reflected, “I guess you can say its okay for a nice Jewish girl to love ‘Jesus.'”

Reprinted with permission of the Connecticut Jewish Ledger.