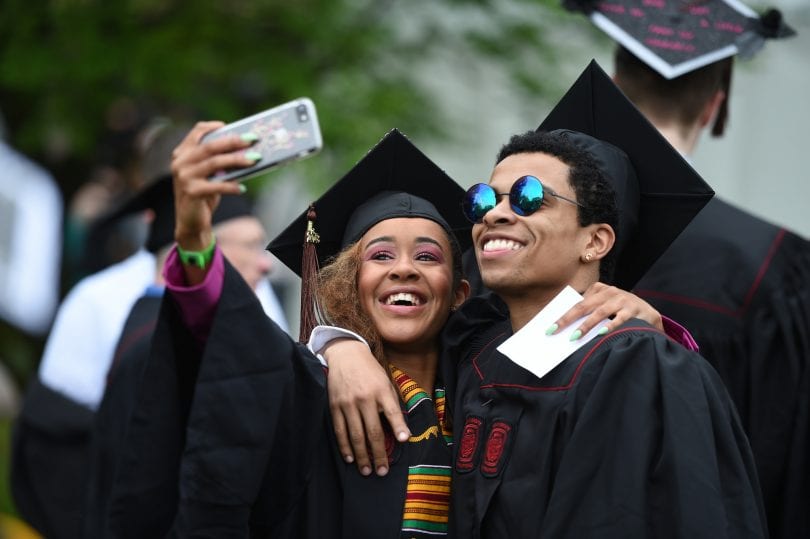 Fashion model and designer Kimora Lee Simmons Leissner was among the 900 students who received undergraduate degrees at University of Hartford in West Hartford on Sunday. 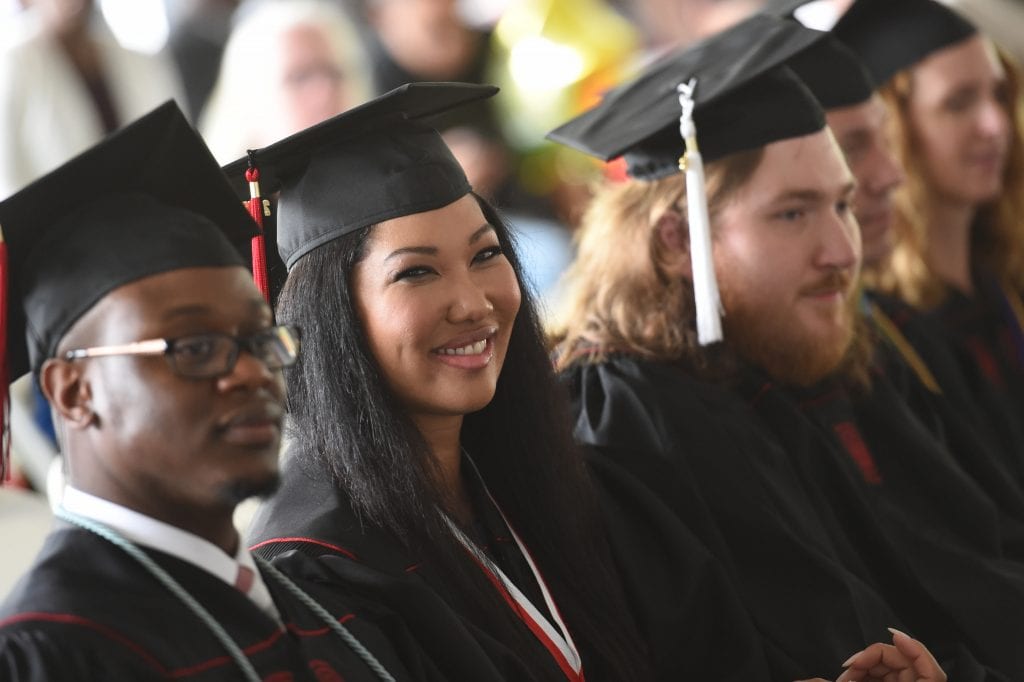 “Take the joy of accomplishment you feel today and keep it for the next 80 years,” was the advice University of Hartford President Gregory Woodward gave nearly 900 graduates who received associate and bachelor’s degrees on Sunday, May 20.

Members of the Class of 2018 come from 31 states and Puerto Rico, and from 17 countries. Sixty percent are from Connecticut. The top four majors for this year’s undergraduates are psychology, communication, mechanical engineering (tie for second), and civil engineering.

President Woodward presided over his first spring undergraduate Commencement ceremony. He became the University’s sixth president in July 2017. President Emeritus Walter Harrison was awarded an honorary Doctor of Humane Letters on Sunday. He thanked the graduates for sharing their day with him “even though it took me 20 years to earn this degree,” he said. Harrison was the University’s longest-tenured president, serving from 1998 to 2017.

Keynote speaker Leonard Garvey Pitts Jr. elicited laughter from the audience when he shared advice that his mother always told him: “Mom always had a way with words. ‘Use your head for more than a hat rack.’ In other words, think.” The Pulitzer Prize winning columnist went on to speak about what he called the current facts-optional ethos.

“You and I have the great challenge of living in an era where the truth has become multiple choice and facts are available in various flavors,” Pitts said. “Indeed, you and I have heard an aide to the president of the United States speak, with a straight face, of ‘alternative facts’ and another one say, outright, ‘There’s no such thing as facts.’ As Pitts continued, there was applause, shouts of agreement, and nodding of heads.

“So Class of 2018,” Pitts concluded, “I celebrate your excellence not simply for what it says about your hard work and perseverance, but for what it confirms about the importance of knowing – what it affirms about the primacy of facts. I charge you to offer yourself to the world as an example of what it means to be a thoughtful, thinking, and thus, truly human being.” The audience responded with a standing ovation.

Three exceptional students were honored on the dais during the ceremony.

Yonathan Shavit, a mathematics major from Brookline, MA, received the 2018 Marion A. Bills Memorial Endowed Scholarship that supports two years of graduate study at the prestigious University of Oxford in Oxford, England.

Scott Veilleux, an economics and finance major from Newington, CT, was awarded the John G. Lee Medal given annually to an exemplary graduating senior based on academic excellence, community service, and a permanent home address in one of 30 designated towns in Greater Hartford. Veilleux will start working at Aetna in June.

Jarrett Lagler, an acoustical engineering and music major from Zionsville, PA, was awarded the 2018 Belle K. Ribicoff Prize, given annually to an exemplary graduating senior who has demonstrated academic excellence, intellectual curiosity, originality of thought, and a commitment to extracurricular activities and community service. Post-graduation, Lagler will be working at Apple.

Lillian T. Kamal, associate professor of economics in the Barney School of Business, received the Roy E. Larsen Award for Excellence in Teaching that is presented each year to one of the University’s most outstanding teachers.

Deborah Kidder, professor of management and chair of the Department of Marketing, Management, and Entrepreneurship in the Barney School of Business received the Trachtenberg Award for Sustained Service to the University that honors full-time faculty members for sustained and exemplary service to the University.

Yingcui Li, assistant professor of biology in the College of Arts and Sciences, received the Belle K. Ribicoff Junior Faculty Prize that recognizes an outstanding junior faculty member – an assistant professor in a tenure-track position, but not yet tenured – who demonstrates combined excellence in teaching, scholarly or creative activity, and service.

Alan Rust, director of the Theatre Division in The Hartt School received the Humphrey R. Tonkin Award for Scholarly and/or Artistic Creativity presented each year to a faculty member who has displayed unusual creativity and innovation in the pursuit of his or her scholarship.

Stephen M. Mulready M’77, executive vice president and chief operating officer of Crum & Forster was honored as the 2018 recipient of the Distinguished Alumni Award that is presented to an alumna or alumnus who has demonstrated excellence in his or her professional endeavors, as well as in personal and civic involvement.

Mulready was also the keynote speaker at the Barney School of Business diploma ceremony immediately following the main ceremony. Among those receiving diplomas there was Kimora Lee Simmons Leissner, who earned a degree in entrepreneurial studies through the University’s online University Studies bachelor’s degree program. The fashion model and icon participated fully in the day’s events from processional to moving of the tassel through diploma presentation. “I’m elated,” she said after receiving her diploma. “This is a great accomplishment for all of the graduates. I was crying, I don’t think anyone else was. Earning my degree was a great experience, difficult, but I’m very happy.” 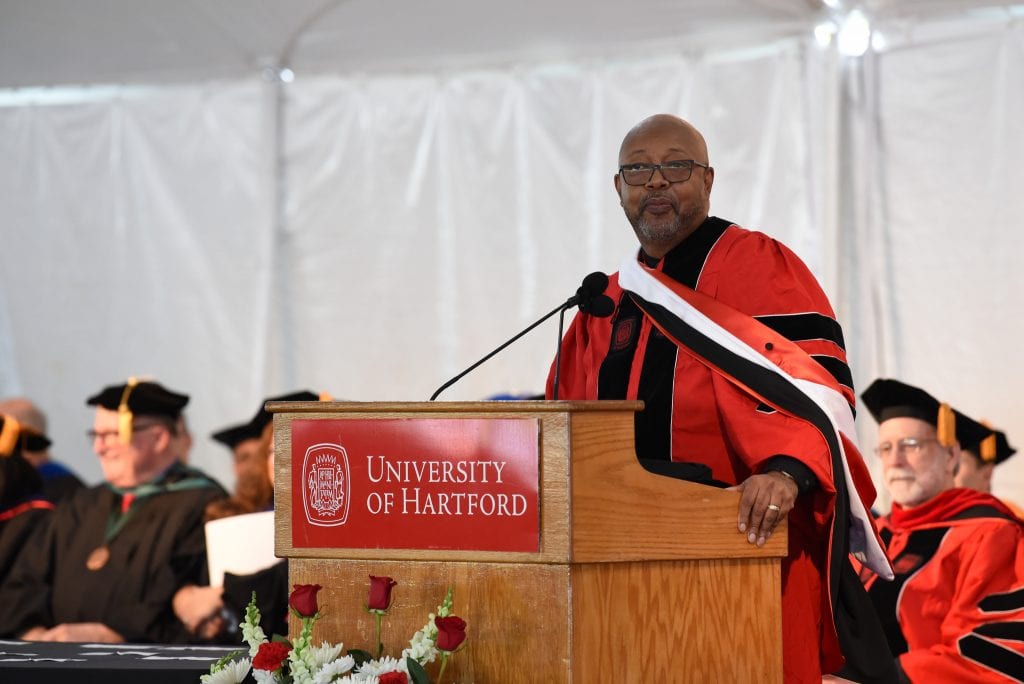 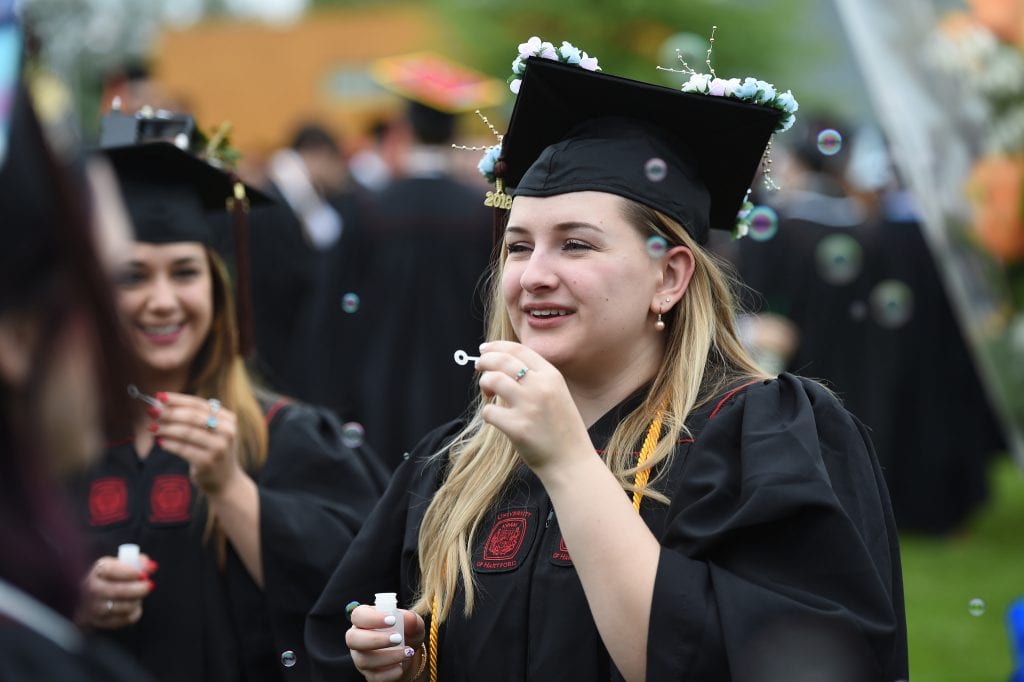 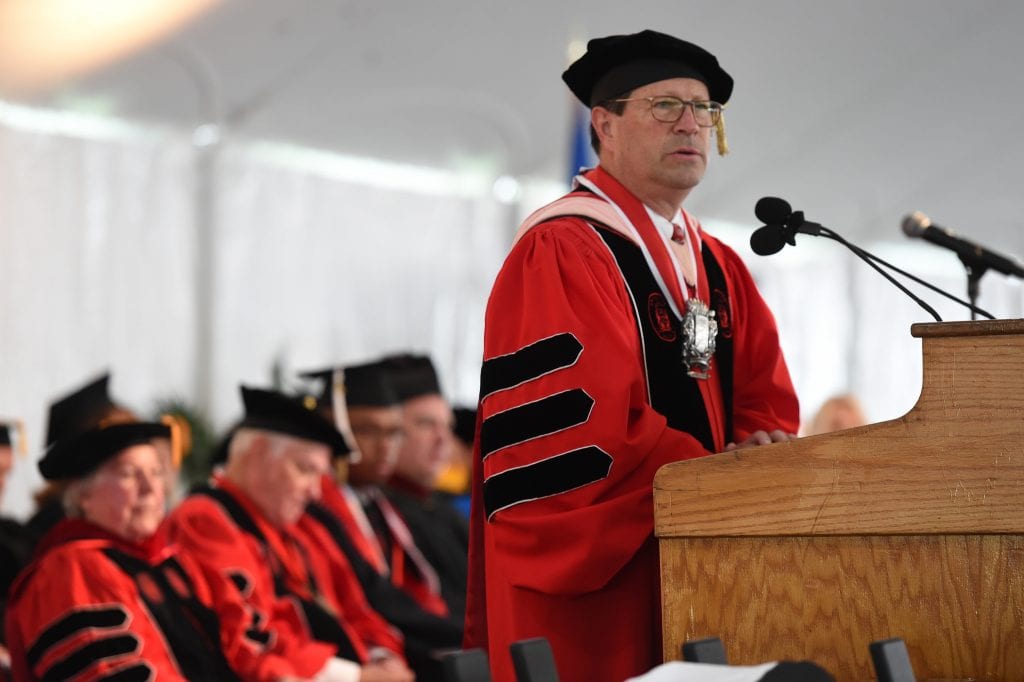 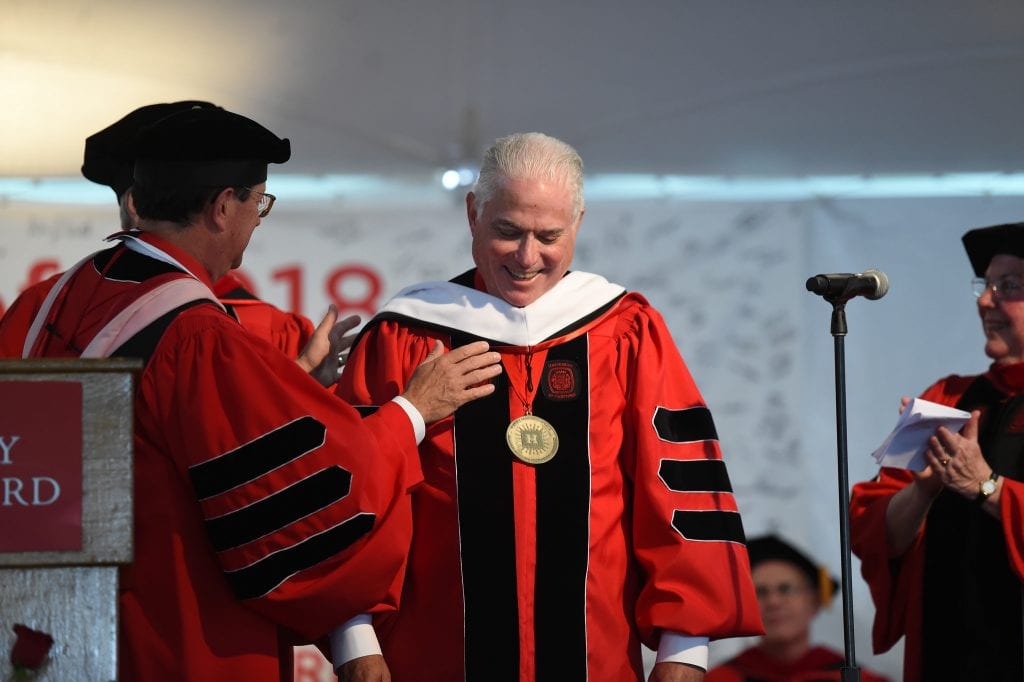 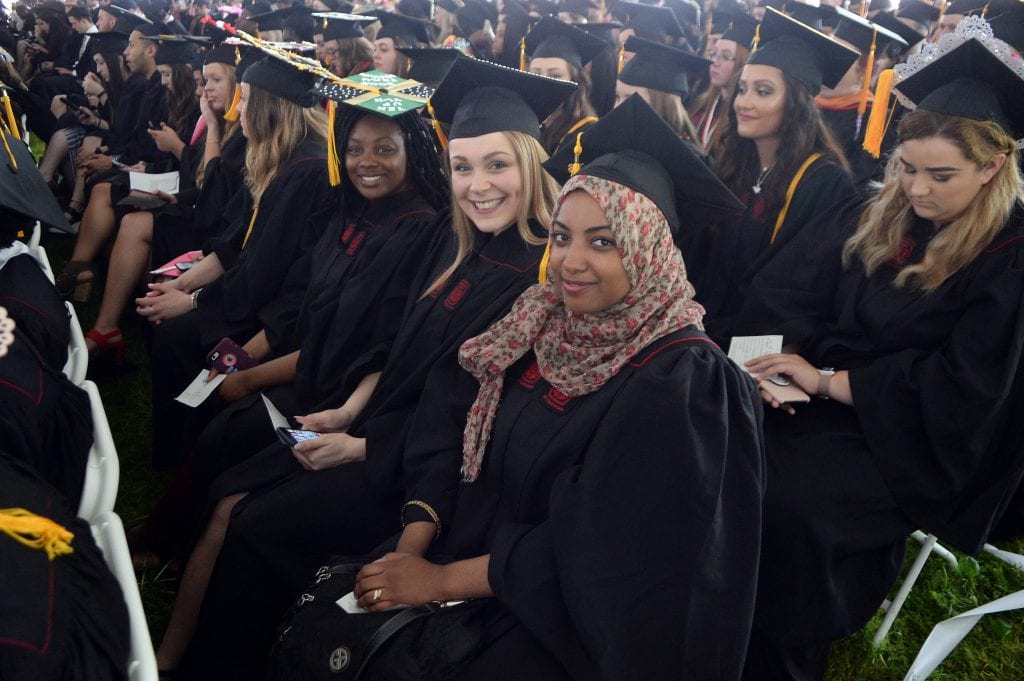 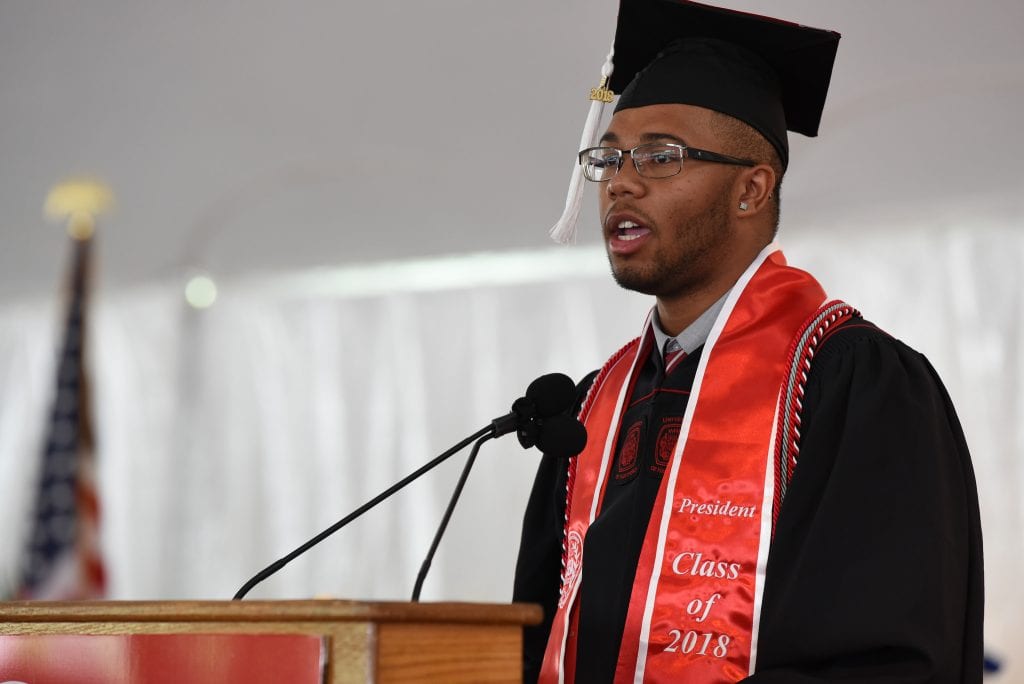 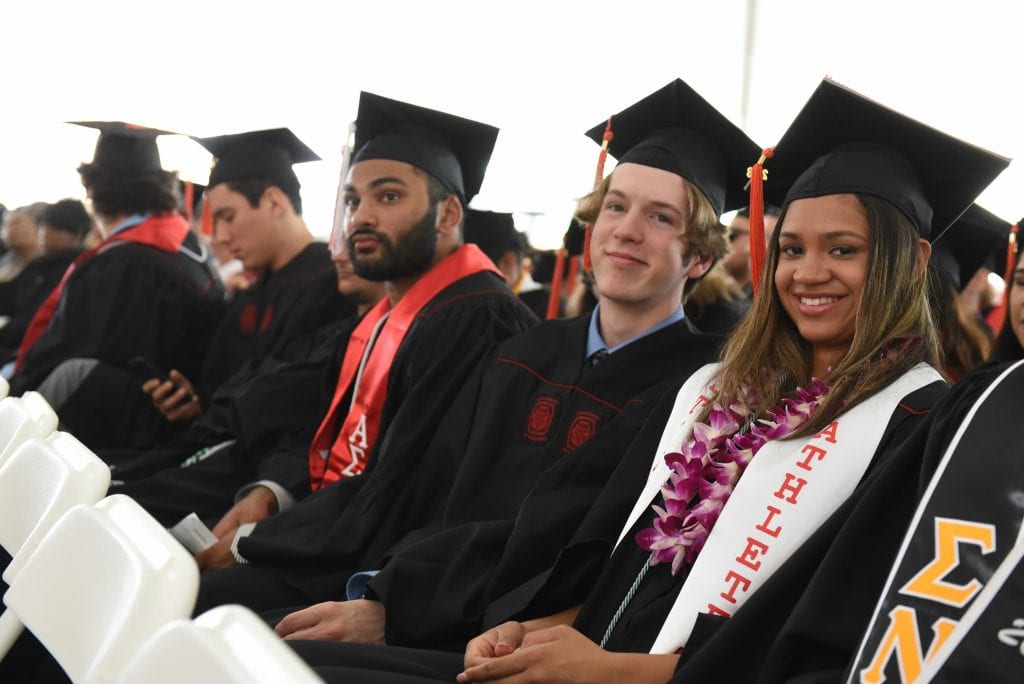