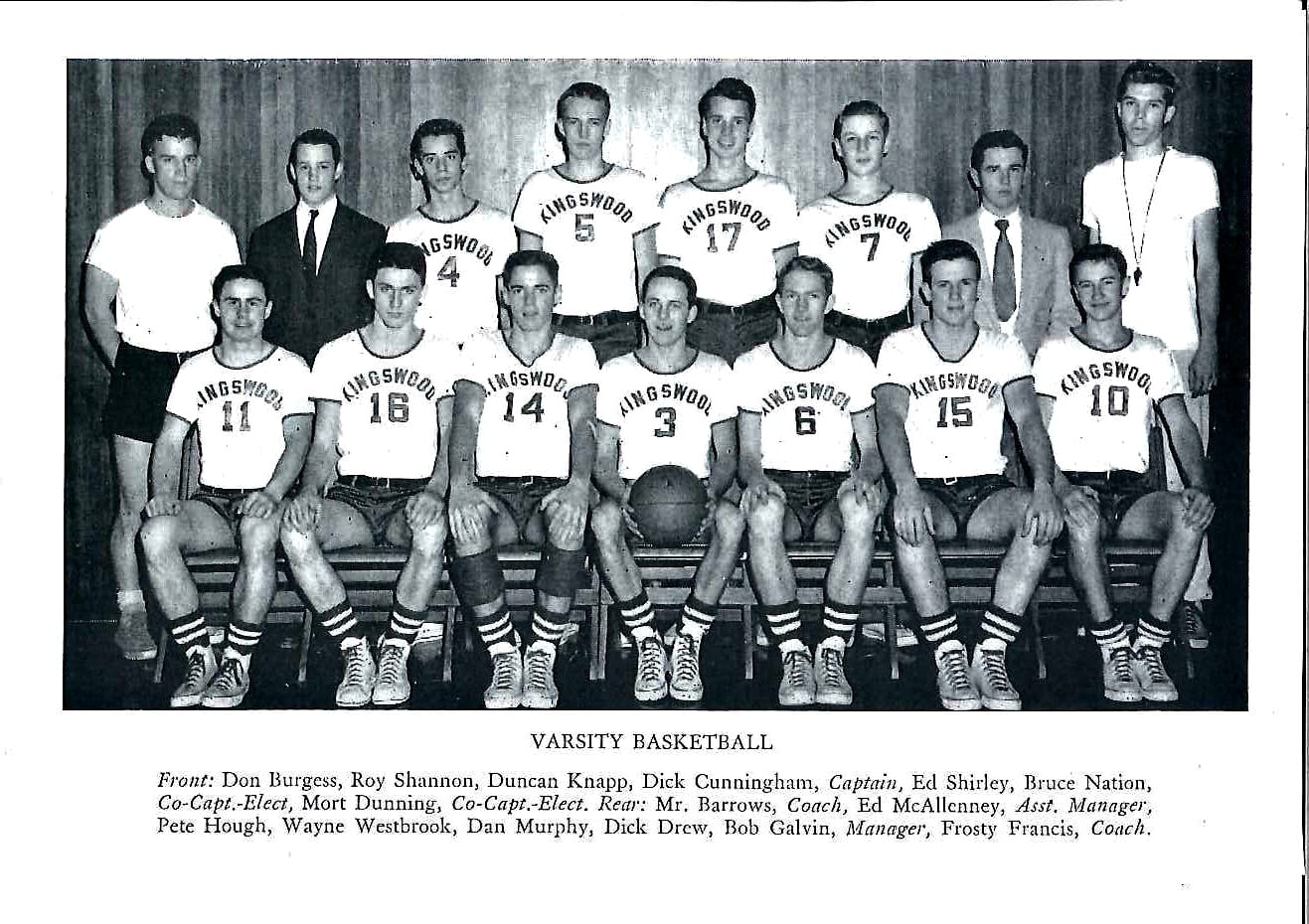 Nine alumni athletes, as well as a coach and a team, were inducted into the Athletic Hall of Fame at the West Hartford school. 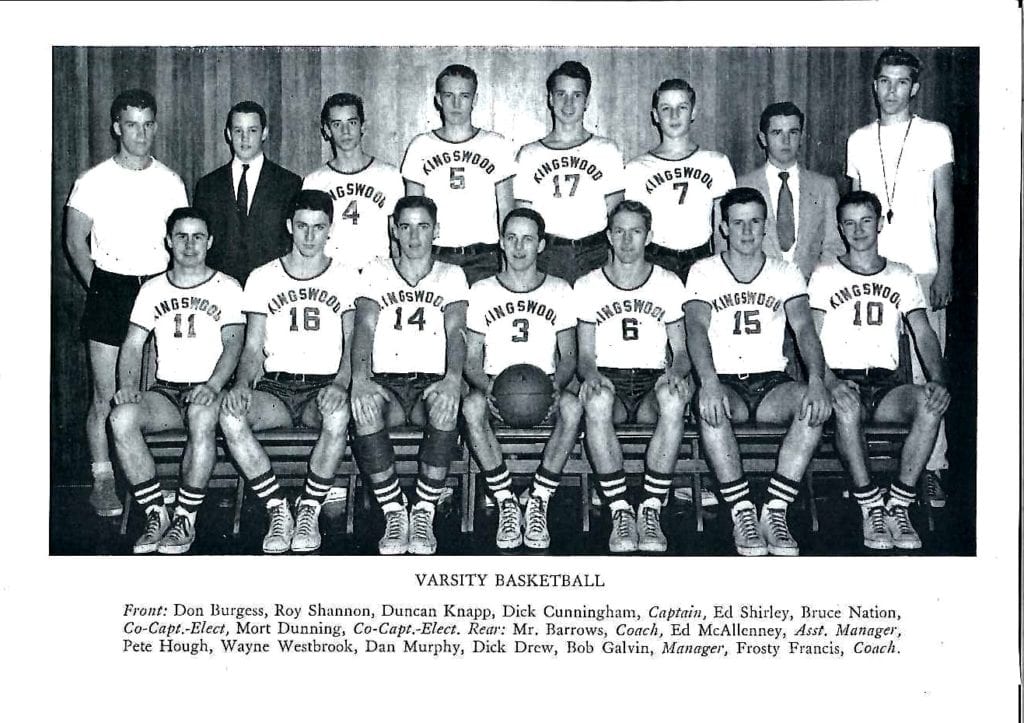 Nine outstanding alumni athletes, a beloved coach, and the 1956 boys basketball team were inducted into KO’s Athletic Hall of Fame on Saturday, June 11, 2016, during a morning ceremony in Roberts Theater.

Chosen for their tremendous athletic achievements, as well as their integrity, sportsmanship, and character, the new inductees are:

A three-sport athlete at KO (cross country, wrestling, and outdoor track), Bees was captain of two (cross country and wrestling). He set a course record at Suffield Academy with a time of 14:29 for 2.7 miles. In 1974, he finished second at the Canterbury Invitational with a time of 14:29 (one second under the previous Division I record) and finished 4th in New Englands. He received the Jonathan Downs Prize in 1975 and the Prefect Award in 1976. At Colby College, he ran cross country and indoor track for four years and outdoor track for three (then sustained an injury). He and his wife Abigail have two daughters, Emily and Sarah; they live in Glastonbury, where Bees works as a research editor at Health Leaders Media.

Brown played three sports (football, wrestling, lacrosse) for six years at KO, and was captain of the wrestling team and lacrosse teams his senior year. In 1964 and 1965, the wrestling team won the Western New England Independent School Wrestling Association (WNEISWA) team championship, and Brown was All State in 1964 and 1965 and the CT State Champ in 1966. He was also an All New England Lacrosse goalie in 1966. At Princeton University, he was on the wrestling and lacrosse teams, and received All Ivy Goalie Honorable Mention in 1969. Brown and his wife, Margaret Ferree Brown ’68, live in Denver, where he is a senior vice president at Cushman & Wakefield. They have two sons, Christopher and Trevor.

Josh Caley was a four-year member of the baseball, soccer, and ski teams. He was captain of the soccer and ski teams as a senior and captain of the baseball team as a junior and senior; as a senior, he was also named MVP and won the McDonald Award as best overall athlete. Caley holds the KO record for career home runs. At Williams College, he played Varsity baseball for four years and served as captain as a senior, when he was named MVP. He was also named second team All-New England in his junior and senior year.  A resident of Stonington, CT, he is a Commercial Project Development at C-TEC Solar, LLC.

Kevin Griswold played football, basketball, and lacrosse at KO, but truly excelled in lacrosse. As a senior, he was named All American and MVP of the KO lacrosse team and played in the New England East vs. West All-Star game. At UNC/Chapel Hill, Griswold contributed to two NCAA lax national championships; won the Jay Gallaher Award as the outstanding freshman player; and was named first team All American at midfielder in 1980 and second team on attack in 1981. He was also named All-ACC in 1980 and 1982 and to the ACC 50th Year Anniversary Team. A director at T-Mobile USA, he lives in Montclair, NJ. He and his wife Tara have two daughters, Keira and Natalie.

Gordon Hamilton played soccer, tennis, and basketball at KO. An All Conference and All State soccer player, he was also captain of the tennis team. He truly excelled, however, in basketball: His buzzer-beater helped the Wyverns win the New England Prep School Class B championship against Cushing Academy in 1991. At Holy Cross, Hamilton played basketball all four years, served as team captain, and was named Patriot Player of the week several times. He went on to play professionally in Belgium and South Africa before returning home to work with students for the City of Hartford. When he passed away in a car accident in 2005, he was also serving as Head Coach of the boys’ basketball team at Watkinson. Along with his KO teammate Keith Wolff ’91, Hamilton was inducted into the New England Basketball Hall of Fame in 2006. His widow, Chastity Rodriguez Hamilton ’91, is a school counselor at KO, and his son, Noah, just completed his first year in Upper Prep.

Another three-sport athlete (football, wrestling, baseball), Jeresaty was a captain of two (football and baseball). As a senior, he had an undefeated season (18-0) and was named All-State. During his years at KO, he earned nine varsity letters. He went on to play football at Bates College, where he earned ECAC honors in 1983 and 1984, and earned an MBA at the University of Texas. President of Ralston Health Group, he now lives in Charleston, SC, with his wife, Elizabeth, and their teenage sons Luke and Blake.

A star in four sports (soccer, ice hockey, lacrosse, softball), Shultz earned a total of 14 varsity letters during her years at KO. A goalkeeper on the soccer team, she posted 42 wins (34 shutouts), and was named a State Select Goalkeeper in 1990 and 1991. Shultz truly excelled, however, in ice hockey: She scored 80 goals in four years; was captain in 1996 and MVP in 1995 and 1996; and was named to New England Prep School All-Star team. She attended the U.S. National Olympic Development Camp (1994-95) and was a U.S. Olympic Development Finalist from 1992-95. At Providence College, she was a starting defenseman on the Division I ice hockey team for four years and ranked 19th out of 130 ECAC D1 defensemen in 2000. A product developer for Timberland, she lives in Portsmouth, NH, with her husband Charlie and their children, Addy (2) and Cody (6 months).

A three-sport athlete (football, wrestling, lacrosse), Smith was a co-captain of the wrestling team in 1960-61; was the CT Champion in 1960 and 1961; and was New England Champion in 1961. Awarded the Jonathan Downs Prize to the boy in Form 5 who has contributed most to the class in helpfulness, good fellowship, and humor, Smith went on to Hamilton College, where he served as captain of the skiing team in 1964-65. He earned a law degree and a Master’s of Law from Boston University and is a partner with Burns & Levinson. He and his wife Judy have two sons and live in Boston.

Keith Wolff certainly left his mark on KO basketball. In addition to being the all-time leading scorer (1,515 points), he was captain and co-MVP of the team in 1990-91. He was also named MVP of the 1991 Class B Prep Championship, which KO won on a buzzer-beater, and of the 1989-90 KITs. At Trinity College, Wolff is 3rd all-time leading scorer and was the leading scorer on the team that went to the Final Four (the only Trinity team ever to do so). He was captain and MVP of Trinity’s team in 1996-86; the NESCAC co-player of the year in 1995-96; an NCAA All-American and Academic All-American; and won Trinity’s award for best male scholar-athlete in his junior and senior years. He was inducted into the New England Basketball Hall of Fame in 2006. The owner of Wolff Financial Group, he lives with his wife, Kris, and their children Jackson Wolff ‘20 and Devin Wolff in Ellington, CT.

Bob Stiehler taught math and coached four different sports – wrestling, boys’ and girls’ lacrosse, and Middle School soccer — during his 39-year career at KO, but he will be most remembered for the impact he had on the wrestling program. During his tenure, which lasted from 1969-2008, he turned the struggling program around and led the varsity team to four championships. He was also the assistant coach on the 1973 and 1978 championship boys’ lax teams that went undefeated. Now the owner of his own contracting business, he and his wife Nancy Weinstein live in Madison, CT, and have two daughters, Judy Stiehler Bargoil ’87 and Whitney Stiehler ’91.

The amazing 1956 Varsity Boys’ Basketball team finished with an 18-1 record – its only loss was to Hotchkiss on “Black Friday” — and won the New England Championship by beating Belmont Hill, 61-46, in a memorable game in front of wildly enthusiastic fans at Boston Garden.