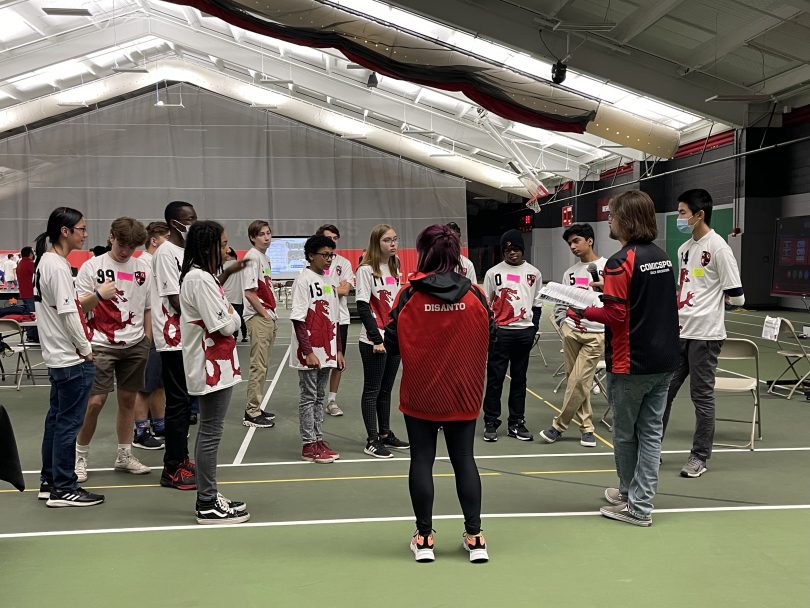 Kingswood Oxford hosted its first Esports tournament on Saturday, Oct. 1, in the Hoffman Field House. Over 50 students from Hall High School, Conard High School, East Hartford High School, and KO participated in the event, with fans and families cheering the gamers on as they played Mario Cart and Smash Brothers.

The KO Esports 16-member team began in 2020 by gaming aficionado (and Upper School French teacher) Coach Ryan Brodeur with the endorsement of Director of Athletics Josh Balabuch and Director of Technology Dan Bateson. Since the KO Esports team’s inception, Brodeur wanted to elevate its profile on campus as well as change the narrative regarding the sport. “The more I learned about it, the more I thought, ‘This is awesome.’ I realized there was a way to organize gaming in such a way that it was truly team-oriented and that I could grow a program around it. I wanted to bring in some of the best gaming elements (team-based, communication, role, execution, self-awareness) and meld them with some of our school’s core values and align with our sports requirement of physical activity. As someone who went to KO, I know the value of being on a team very keenly. Even if you are not very good, you’re putting yourself out there.” 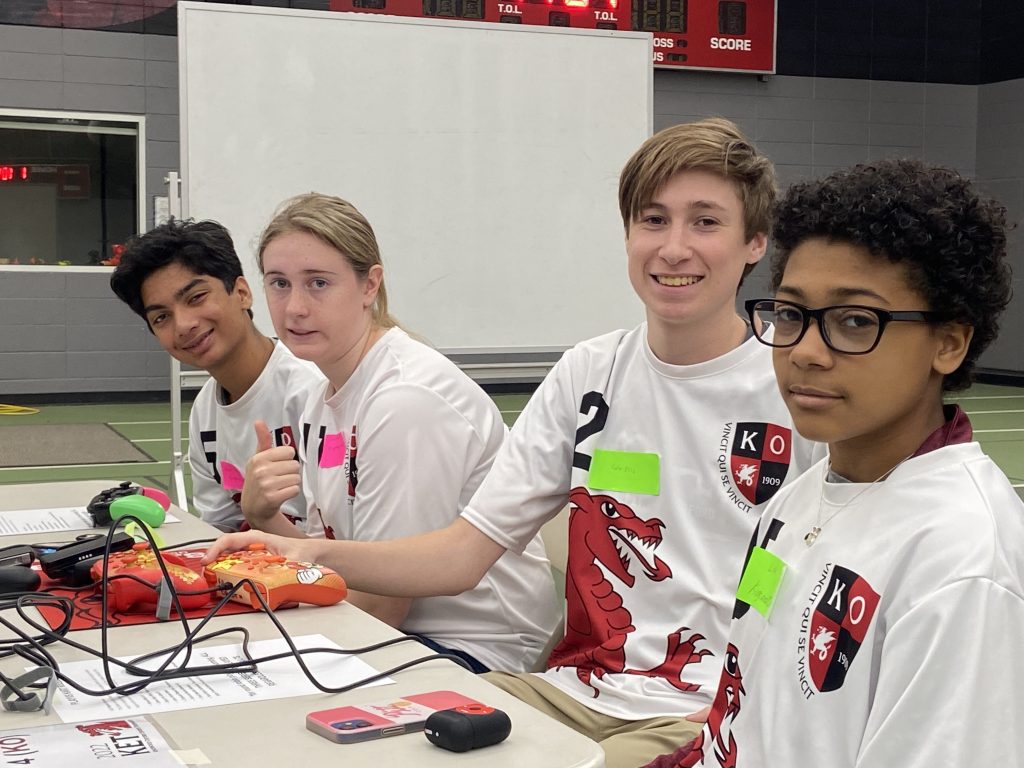 The KO Esports team plays in a regional league with approximately 150 teams from Maine to Florida. The team plays three to four titles: Rocket League 3 v 3 car soccer, Mario Cart, 4 v 4 racing circuit with 50 maps and, Super Smash Brothers, 2 v 2 characters that are knocked off a map, and Splaltoon, 4 v 4 game with a Squidperson who inks color on a map in your color ink.

For Brodeur, Esports represents an opportunity for the school to be a more inclusive community. He explained that it’s difficult for a new player who has never dribbled a soccer ball to feel like they can contribute to a team. Now that many “thirds” teams no longer exist on campus, Esports offers an avenue for students to be part of something bigger.

“Esports allows that space to still exists,” Brodeur said. “A kid may not be able to make it onto a JV team, but they might have some awareness of gaming and be part of a team environment to contribute. It also gives kids who have been doing this for years to showcase their skills and feel recognized and validated for what they’ve been doing. And, it’s a cool opportunity to build a team that operates differently from the others.”

And for those who think Esports is just for the anti-social, Brodeur is quick to disabuse you of that notion. He feels that, inherently, it is a team sport. Not only can gamers coalesce around a shared passion, but the best players and teams are those who constantly communicate with one another. “To be successful on a team, you need an excessive amount of communication because if you are not, you won’t succeed,” he said.  “In Rocket League or Splatoon, if you don’t talk with the people you are playing with, you will not succeed; you will get walked over. Raw talent will only get you so far.”

Before practicing and competing in their games, all team members participate in 30 minutes of fitness consisting of weight training and light cardio. Assistant Coach Katheleen DiSanto created a series of scaling workouts for beginners and modified the exercises for students who need more of a challenge. In addition to punishing pushups, crunches, and jump squats four days a week, the team plays Ultimate Frisbee on Fridays.

Before Brodeur organized the tournament, he did his homework, speaking with Epsorts coaches from colleges, Esports directors, and other schools to get oriented. “What I realized by accident is it is not incredibly unique at what we are doing at KO, it’s completely unique. No one has a program like ours. Kids play five days a week, every day, working out every day and strategizing. I realized we had a special thing, and I wanted to showcase that and plant a flag. And I wanted the kids to feel special.” Although Hall and Northwest Catholic had a program, those teams did not have KO’s level of organization.

During the tournament, there was a steady stream of activity in the Field House. The projectors featuring certain competitions allowed the fans to focus on different games, with East Hartford High School receiving a lot of crowd energy in the afternoon session of Mario Cart. Although KO was in the finals for both games, East Hartford took the prize for Mario Cart, and Hall won for Smash Brothers. Brodeur concedes that KO could have won for Smash Brothers, but the KO team was having too much fun.

Brodeur said it was interesting to see the players grapple with the mental toughness and endurance required to stay focused on the matches, just like any sport. And many KO traditional athletes who also participate in Esports could draw parallels between what they would see on the soccer field in the gaming space.

What next for KO’s Esports team? Brodeur has set his sights on building the program ideally to accommodate two teams – one for boys and one for girls and move into a larger space. “I so enjoy Esports,” he said. “I can’t stop working on it. It’s a very unique program for us at KO, and no other prep schools have one.”

Many colleges are signing kids to play Esports, and Esports programs are popping up in colleges across the country. Brodeur said he spoke with five Big East programs planning to greenlight scholarships for Esports in the next year or two. Already The College of William and Mary has an Esports minor that ties in with their business degree.

Brodeur is on to something big. Esports is not just fun and games. 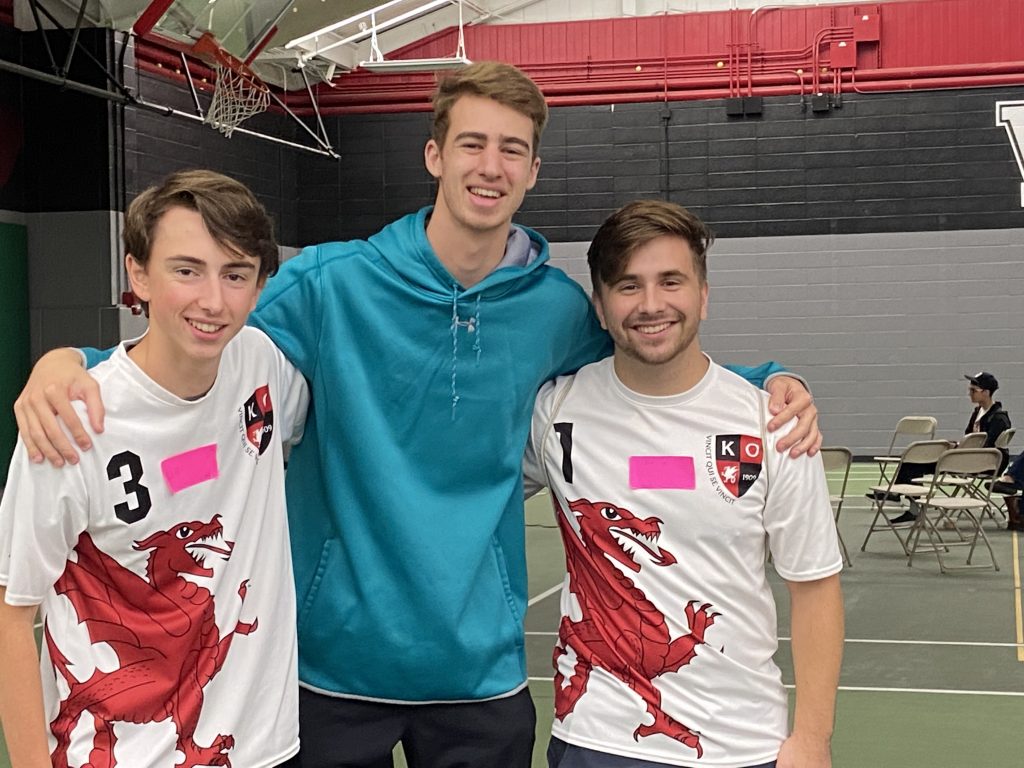