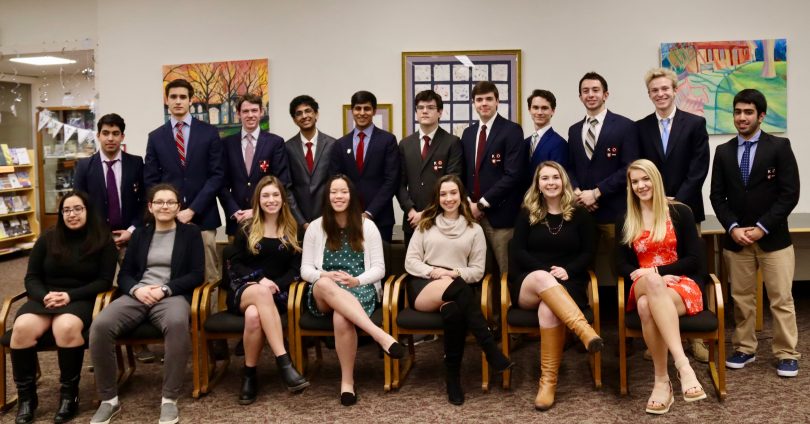 The following students were inducted:

Head of School Tom Dillow impressed on the inductees that their academic achievement is remarkable and that this honor is the beginning of continued growth for them as students and as scholars.

Dillow said, “At our highest ideal, is that you graduate not just with high GPAs or lots of things to put on your resume, but a genuine and authentic love for learning and a curiosity about the world.”

At Kingswood Oxford, Anavim embraced the opportunity to be involved in many different ways: a varsity swimmer, an executive committee member of the Shield and Dragon committee, and the yearbook editor. Anavim said, “I was a presumptuous teenager who thought I knew it all. My senior year before graduating KO I had cultivated relationships, achieved high marks in my classes and thought that I had the skills to make the best decisions all of the time.”

She smiled thoughtfully before adding, “What I didn’t realize was that there were life lessons I needed to know, that only experience would bring and ultimately guide my personal growth.”

Anavim talked about how deeply Kingswood shaped her experience beyond high school. She encouraged students to reflect on their core values and how they have shaped and will continue to shape, the person they will become.

She noted three values that have developed her both personally and professionally since graduating. The first was being thankful for her time at KO. She recognized while oftentimes it’s hard to appreciate school while in the thick of it, it wasn’t until she was helping a friend in college edit a poorly written paper that she realized what an incredible foundation KO had given her.

She challenged the soon-to-be graduates to be comfortable outside their comfort zone. An avid swimmer upon entering college at the University of Connecticut, Anavim realized she didn’t want to swim anymore. She stepped away from the pool and got involved in other activities including joining a sorority, becoming a member of a few clubs and serving as a tour guide on campus. “By opening myself up to new opportunities and experiences I was able to meet people that would become lifelong friends.” She encouraged the newly inducted cum laude students to attend interesting meetings, speak up, introduce themselves and get to know people. “It might be hard at first … but I promise it will be worth it,” she said.

Lastly and arguably the most important lesson she imparted was the ability to be okay with failing. Arriving at college, Anavim had proscribed, definitive plans. She was enrolled in a pre-med track and was determined to be a practicing medical doctor by 2020. Three and a half years later after logging many physiology and neurobiology classes and exams, and countless hours and conversations with professors later, she changed her mind. Anavim realized she much preferred leading public affairs and spearheading marketing efforts in her campus clubs. She applied to the UConn School of Business and was accepted as a marketing major. She set her goal post-graduation to work for a boutique advertising agency in a major city. Instead, she accepted an internship establishing a social media program from its roots for a top-three industrial distribution company in her hometown of Bloomfield. She excelled and quickly worked her way up to the corporate level where she managed all internal and external communications for divisions.

Most recently, she accepted a position as a digital workplace and internet manager at a tech company in Fairfield County. Aside from big responsibilities at her Connecticut base, her new role will her traveling all over the world to the company’s 23 global offices. Anavim said, “I couldn’t be happier. All of those moments that I considered failures at that time meant more to me than the successes would have if I had attained those original goals.”

She challenged seniors to identify what their values were, how they will change we they grow and what experiences have and will continue to shape them as individuals. She assured them that, “the experiences at Kingswood Oxford have provided you the foundation upon which to build.”