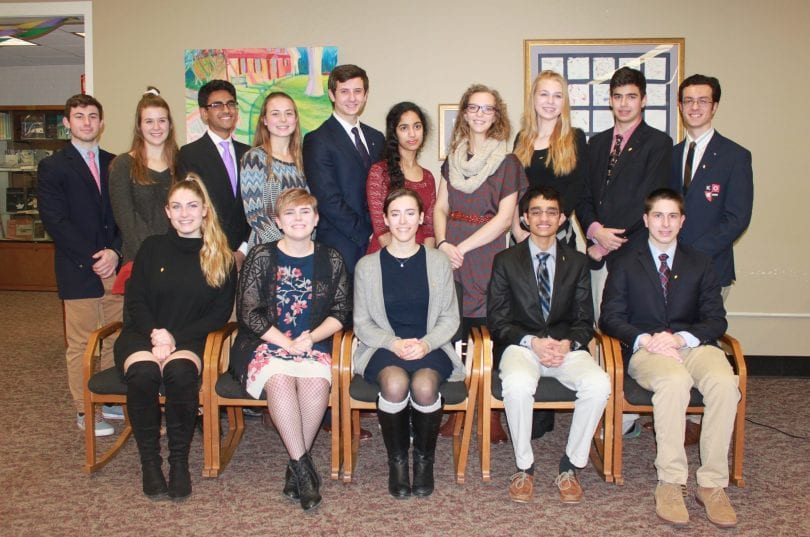 Emily Goldman ’09 addressed the parents and students as the keynote speaker after the induction ceremony. Since graduating from KO, Goldman had led a peripatetic and rich life living across the globe. She initially took a gap year following KO, and spent the year studying dance and development in Nicaragua, Senegal, Argentina, and Paraguay, before entering Brown University. While in college she started a non-profit, Hip Hop 4, to help underserved inner-city youths through dance in an after school program. In its first year, the NGO raised $15,000 in grants for the organization. She received a Mellon Research grant to fund her project while she studied at the C.V. Starr Middlebury School Abroad in Egypt where she researched how hip-hop music was used as a political statement.

For the past four years, Emily has been living and working in Jordan. She has worked in humanitarian aid for the UN, the International Rescue Committee, and others. She was also the co-manager of Studio 8 Amman, an arts NGO for at-risk youth, which led her to teach dance and theater in Syrian refugee camps, royal institutions, and cultural centers across Jordan. For the past year and a half, Goldman has also served as the Resident Coordinator for Middlebury College’s School in Jordan.

Goldman explained that while a student at KO she always heard the faculty talk to the students about the responsibility to use their “privilege” but she had little understanding beyond that “life was unfair and I was lucky.” While in college she was inspired by a straight-talking friend who said to her, “You carry your privilege like a chain. Use it for the people who don’t have it.”

Compelled by this insight, Goldman began to understand that she could use her station as “steel pliers that cut through the wires and red tape” to help those in need. Although many of the “vulnerable” individuals that Goldman worked with were, in many cases, stronger and more capable than herself, they lacked the tools and knowledge that Goldman gained at KO: strong written and verbal communication and critical thinking skills. With these tools, Goldman was granted access to funding that was denied to others. She said, “You can pry your way into meetings. You can pry open doors that would have been shut. You can make a difference.”

Currently, Goldman developed a new program for Middlebury College called Jiran: The Arabic Community Action Summer, which will be based in New Britain. Jiran will be an Arabic immersion summer program in which Arabic language learners will be paired with recently-arrived Arabic-speaking families for a program focused on mutual linguistic and cultural learning as well as the challenges facing Arabic-speaking refugees and immigrants in the US.