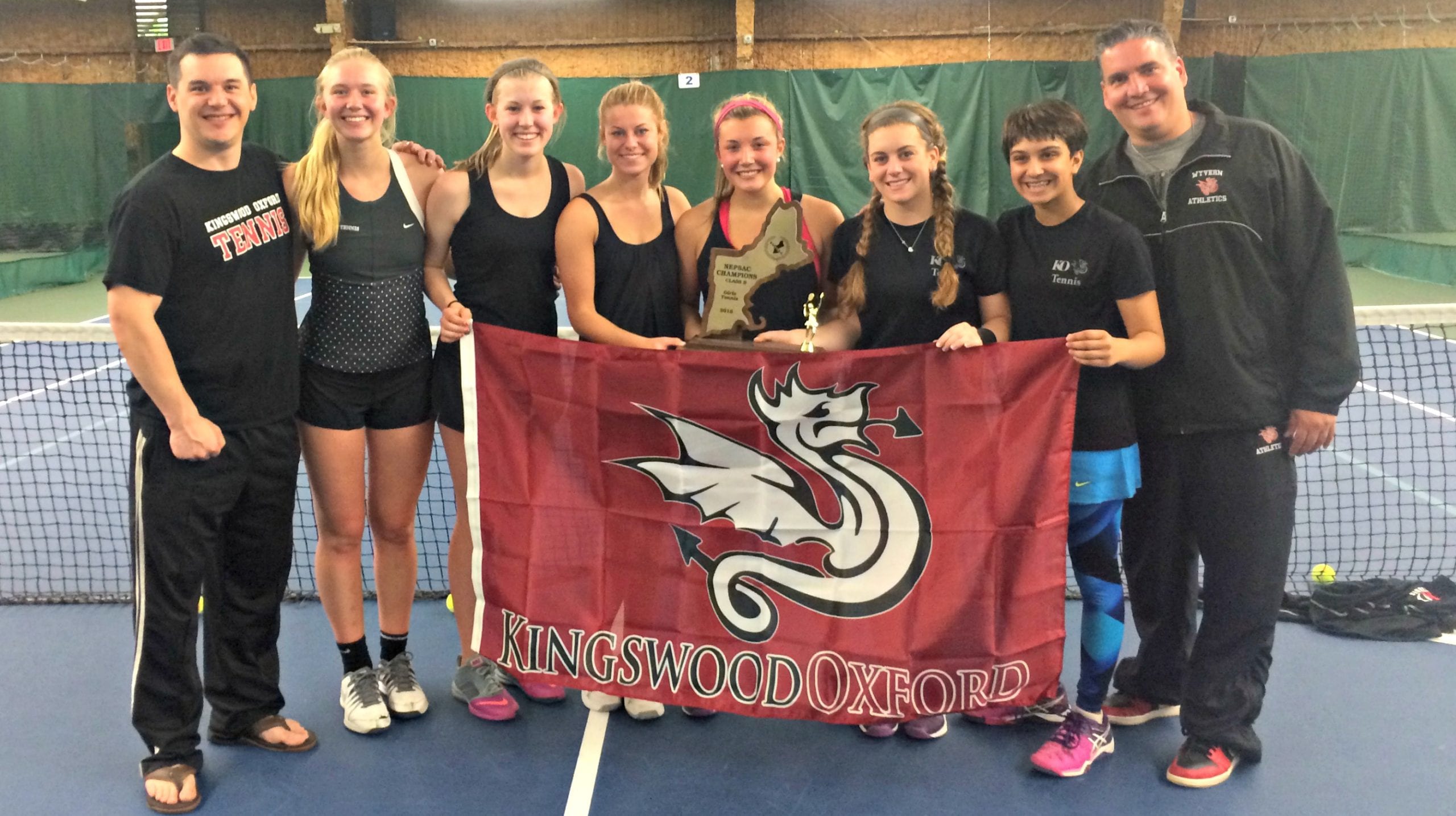 The KO Girls’ Tennis team clinched the New England Championship by beating Choate, 5-0, on May 22. It was the third New England title for the Girls’ team and their first undefeated season since 2009. Photo credit: Debbie Fiske

Both the girls and boys tennis teams at West Hartford’s Kingswood Oxford School won the New England Championships on the way to making school history. 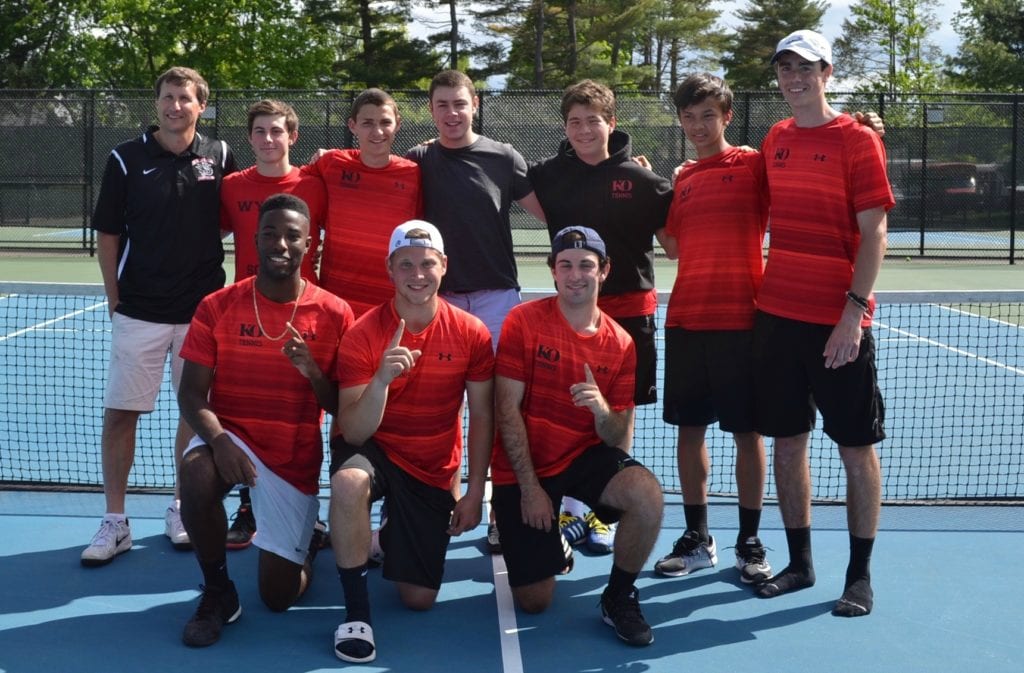 By winning New England Championships on May 22, Kingswood Oxford’s Girls’ and Boys’ Varsity Tennis teams earned the final jewels in their “triple crowns” – and made school history in the process. For the first time ever, both teams went undefeated, won Founders Championships, and won New Englands in the same year.

In the finals of the New England Class A Championship at Choate, the Boys’ team beat Taft, 4-3, in a nail-biter that came down to a tie-breaking singles match won by Luke Riemann ’19. It’s the first New England Championship for the boys.

After winning points at #1 and #2 doubles (the #3 doubles match, locked in a 5-5 tie, was pulled when the doubles point was decided), the Wyverns turned to singles.

Matt Lord ’17 won at #1 singles with a 6-0, 6-0 victory, capping an undefeated season in which he never lost a single set. “This is truly remarkable, and he did it in a classy, humble manner,” said Boys’ Varsity Head Coach Andy Krugman ’86.

This meant that Riemann’s would be the deciding match; it was the third time this season that he was in this pivotal situation. He won the first set 6-3 but lost the second one, 6-4.

“After dropping the first game of the deciding set, Riemann rattled off six straight games with terrific groundstrokes and poise that is unusual in a freshman,” Krugman said.

The final score of 6-3, 4-6, 6-1 gave the Wyverns their victory, preserving their unblemished season (17-0 – the first undefeated season since 1973), and made them New England champs. 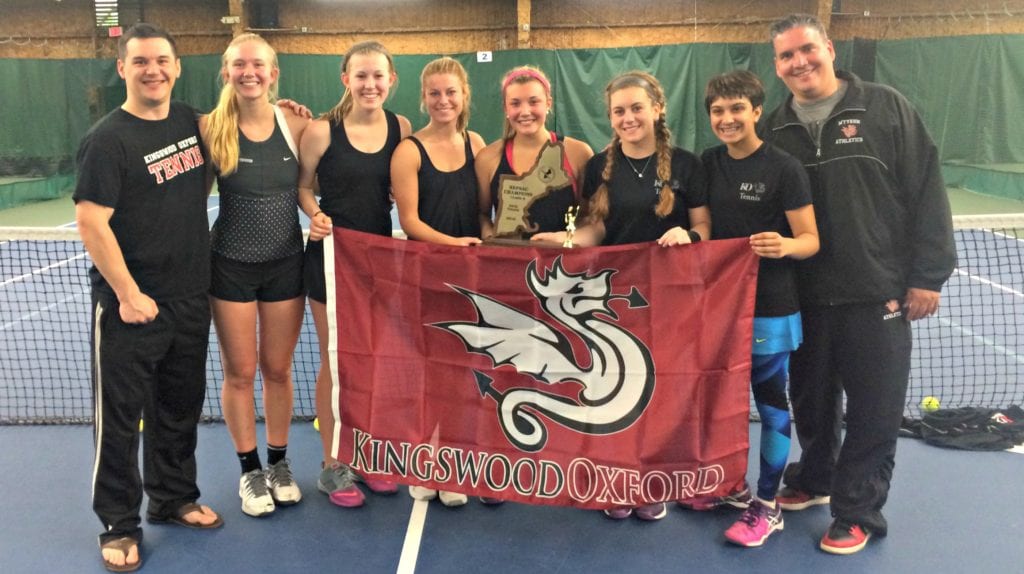 The KO Girls’ Tennis team clinched the New England Championship by beating Choate, 5-0, on May 22. It was the third New England title for the Girls’ team and their first undefeated season since 2009. Photo credit: Debbie Fiske

Meanwhile, the Girls’ team beat Hopkins, 5-0, in the Class B New England Championship at Westminster. It was the third time the team won the title; the prior wins were in 2011 and 2014.

After Risinger and Perron won their singles matches, the victory was secured – as was the undefeated season (the first since 2009) and the New England Championship.

“This was exactly how these three seniors deserved to finish their high school careers,” said Girls’ Varsity Head Coach Ron Garcia. “They are the best group of seniors I’ve had in my 19 years of coaching. I’m so glad that they will graduate as champions.”

The preeminent independent co-ed day school in Greater Hartford, Kingswood Oxford School is located just steps from Blue Back Square and West Hartford Center. Its 508 students come from 62 towns in CT and western MA, as well as China and South Korea.

There is still some room left in some grades for September 2016 enrollment; for information or to arrange an interview and tour, contact the Admissions Office at 860-727-5000 or [email protected].