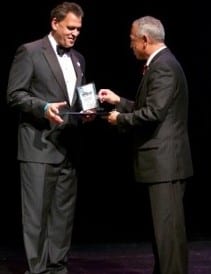 Dennis Bisgaard of West Hartford’s is also founder of the Kingswood Oxford Leadership Institute for Educators of Color. 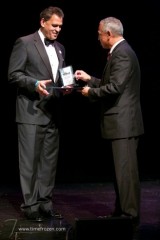 Dennis Bisgaard, the Head of School at Kingswood Oxford, was one of the “One Hundred Men of Color” honored at a Gala at The Bushnell on Oct. 3.

Hosted by the Eleven28 Entertainment Company, the Gala recognized men of color from Springfield to Stamford who have achieved distinction in their profession or industry. New York-based TV journalist David Ushery was the keynote speaker, and Hartford Mayor Pedro Segarra and Gov. Dannel Malloy also offered remarks.

“I (created the Gala because I) wanted to inspire young men by recognizing the many, many men of color in our realm who are powerfully and thoughtfully changing our communities for the better,” said June Archer, president of Eleven28 Entertainment.

“It was an honor being recognized among this group of distinguished businesspeople, community leaders, educators, and other leaders,” Bisgaard said.

Bisgaard, now in his ninth year as KO’s Head, is a lifelong educator who has worked as a teacher and administrator at such independent schools as Collegiate School in New York City, The Bryn Mawr School in Baltimore, and Shady Hill School in Cambridge, MA.

In addition to leading KO since 2006, Bisgaard has immersed himself in the Greater Hartford community, serving as a leader or Board member in groups ranging from the CT Coalition Against Domestic Violence, to the CT Association of Independent Schools, to Covenant Preparatory School, a tuition-free boys’ middle school in Hartford, and SATO (Student Achievement Through Opportunity), to name just a few. He also serves on the boards of the National Association of Independent Schools (NAIS) and MiddleOak, a private insurance company.

And, Bisgaard is the founder of the Kingswood Oxford Leadership Institute for Educators of Color, which attracts dozens of administrators of color from across the country for four days of professional development and networking on the KO campus each June.

Born in East Germany, Bisgaard was adopted at age 9 after his mother’s death and raised in Denmark, where he completed undergraduate and graduate degrees at Odense Universitet.

In 1988, he was awarded the first annual Thanks to Scandinavia Fellowship to the U.S. and attended graduate school at Temple University, where he completed his dissertation. Later he also earned a Master’s degree in educational administration with a focus on private school leadership at Columbia University.

He and his wife, Monica, have two children, Nicolas and Saudea. Herself an educator, Monica holds a Master’s degree in counseling psychology from Harvard University and has held positions at Milton Academy, Shady Hill School, Lesley University, Harvard University, and Bunker Hill Community College.