According to data released by the state on Thursday, 46.7% of West Hartford residents who are 75 or older have received at least one dose of the COVID-19 vaccine. 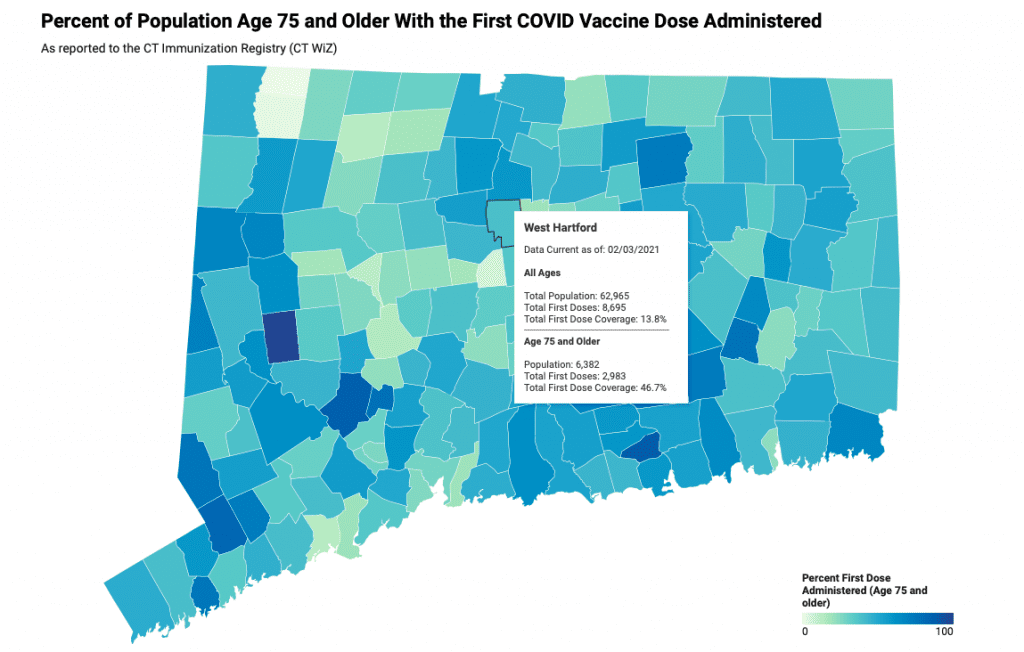 Nearly half of Connecticut residents aged 75 or older had received the COVID-19 vaccine as of Thursday according to Gov. Ned Lamont, who is already looking ahead to when the next group might start to be vaccinated.

“We’re finishing up the 75 and above group. They should be essentially done – 85% or so – I’d like to think by the middle of February,” Lamont said.

“We had always thought 65 and above was going to be towards the end of this month, the end of February. I think we’re getting that a little bit faster but we’re not going to be able to tell you with certainty for another week or so,” he said.

Lamont provided the update during a televised news briefing during which he offered some statistics regarding the ongoing vaccination effort. So far, 49% of residents statewide in the upper age bracket had been vaccinated. Providers had given first doses to 358,019 people in Connecticut and another 101,238 had received their second doses.
In West Hartford, 46.7% of residents ages 75 or older have received at least their first dose of the vaccine.

The state hopes it will start receiving a bigger supply of vaccines soon and the governor said he was looking forward to opening “that aperture” to a wider group of people, including essential workers, after the 65 and above cohort.

Josh Geballe, Lamont’s chief operating officer, said he believed by the end of the week providers were on track to have made up all the vaccination appointments that were cancelled due to Monday’s heavy snowfall. Meanwhile, Geballe said the state had vaccinated a group of 27 older inmates in Correction Department custody that had been scheduled for Monday. 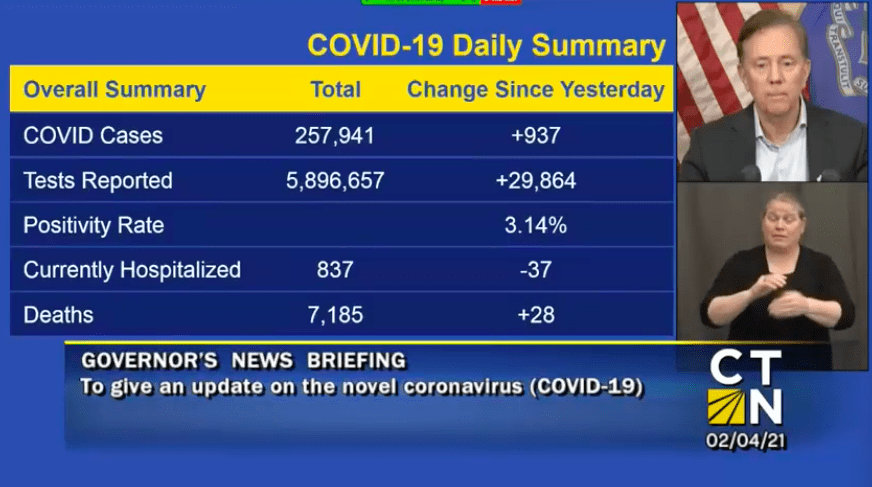 Lamont said he hoped the ongoing vaccination effort would continue to drive infection rates down in Connecticut. On Thursday, the number of people hospitalized for the virus dropped by 37 patients to 837 statewide. The governor reported an additional 28 COVID-related deaths, roughly half the number he reported last Thursday, and the state’s daily infection rate stood at 3.14%.

“That’s pretty good. Pretty good in the sense that it’s the lowest positivity rate we’ve had since Halloween. I think 3.14 seemed a little scary on Halloween but now it’s part of a trend line in the right direction,” he said.

The state experienced a surge in the virus after Halloween which was followed closely by spikes after Thanksgiving, Christmas and New Year’s. Lamont took the opportunity to remind residents to use caution during this weekend’s Super Bowl.

“It’s a great event, I’m really looking forward to it — I’m cheering for the old guy, obviously — but that said, we got to make sure it’s also an event that we handle cautiously and make sure it doesn’t create a spike up,” he said. “The trend lines are so positive right now.”

According to the state, West Hartford has had just 12 new positive COVID-19 cases reported in the past two days, eight in today’s report and four in Wednesday’s report. The case rate per 100,000 population for West Hartford reported Thursday has dropped to 30.2, down from 34.2 the prior week. The most up-to-date rate is based an average new positive cases over the 14-day period Jan. 17-30.

Since the pandemic began, West Hartford has had 3,467 cases, and 213 residents have died according to data reported by the state.