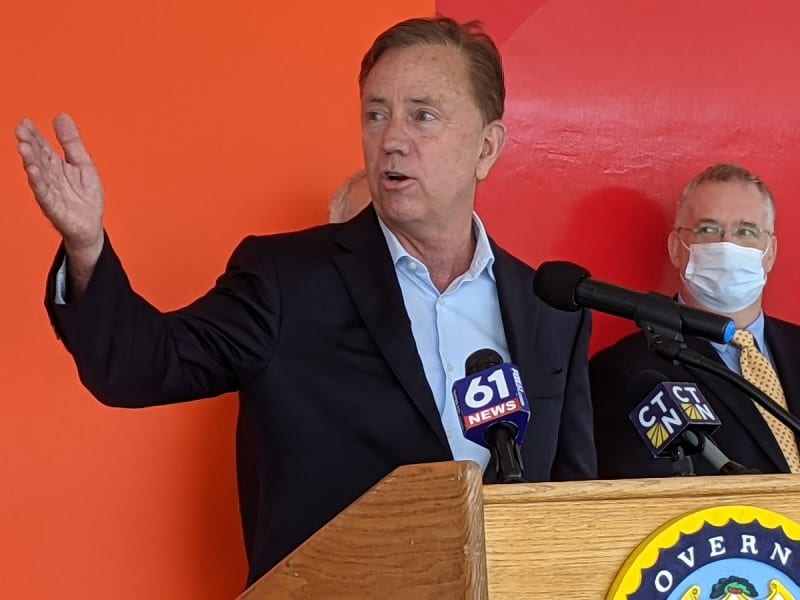 Following a bill signing in Storrs, the governor said the state was competing for talent in a tight labor market.

During a morning Q&A session with reporters, budget secretary Melissa McCaw and Chief Operating Officer Josh Geballe described the compensation boosts that went into effect at the beginning of the month.

The employees, who comprise about 6% of the state workforce, will get a cost-of-living increase of 3.5%, a 4% increase in their base salaries and a one-time $2,000 bonus. The increases are designed to reflect boosts negotiated by state employee unions in 2017 and are expected to cost about $13.3 million.

In the future, non-union workers will enjoy whatever salary increases are given to unionized employees, McCaw said.

“It is our intention with applying that law that, going forward, whatever wage increases or salary increases are negotiated, those same increases will be extended to managers,” she said.

However, Geballe said it can already be difficult to convince unionized employees to take a managerial promotion when, in some cases, their current job has better compensation.

“People stop wanting to take these management jobs even though they’re incredibly important,” Geballe said. “It’s common where we’ll post for a job and we don’t get qualified candidates for the role because our offer is so far below market that it doesn’t attract any qualified candidates. It’s a major problem.”

In a statement, Monika Nugent, president of the non-union workers’ association, Managerial and Exempt Employees United, said the raises would begin an overdue process addressing the salary compression of state managers and reduce the impact of next year’s retirements.

“This win was the result of so many managerial and exempt state employees taking collective action and speaking with a united voice,” Nugent said. “We plan to build on this momentum to further grow our local affiliate and take on the issues impacting our colleagues.”

In a statement, House Minority Leader Vincent Candelora said that problem was created by a “vicious circle” in which Connecticut policymakers generally deferred to the requests of state employee unions. He said the attitude had created a gulf between the pay of union and non-union workers.

“I understand what the governor is attempting to do, yet I wonder how these raises will affect not only current contract talks with union negotiators for rank-and-file workers who want more pay, but also the work of a new task force charged with studying this issue and reporting back to the legislature,” Candelora said.

The pay increases for non-union workers come as the unions representing much of the state workforce negotiate for more favorable contracts. Their contracts expired at the end of June and hundreds of unionized state workers rallied at the state Capitol earlier this week.

Through a spokesperson, the State Employee Bargain Agent Coalition issued a statement Thursday saying Connecticut should be a “model employer, providing fair contracts to its unionized workforce, and leading other employers in providing safe and equitable workplaces for theirs.”

Geballe said the raises announced Thursday also will apply to agency and department heads in the executive branch.

“A lot of the commissioners, the governor has recruited from private industry. Myself included, frankly,” Geballe, a former IBM executive, said. “To get talent into the top leadership roles, it’s the same challenge.”