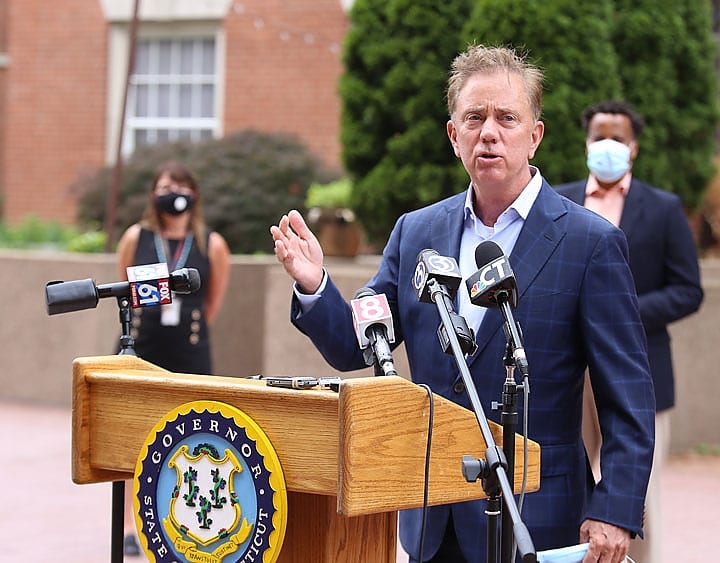 As of Tuesday morning, 14 Eversource customers remained without power in West Hartford, including the businesses at 135 South Main St.

With nearly 50,000 Eversource customers still in the dark almost a week after Tropical Storm Isaias hit the state (down to just under 30,000 by 11:30 a.m. Tuesday), Gov. Ned Lamont on Monday called for the Public Utility Regulatory Authority to employ a new method of compensating utilities to hold them accountable for their performance.

“If you’re without power now, you’re mad as hell and not going to take it anymore,” Lamont said.

Lamont acknowledged that there’s a lot of talk about firing the management of the utility and fines, rebates and refunds, but what’s going to make a big difference is how regulators regulate utilities.

‘I believe we heard all the same things after the last big outage,” Lamont said.

In 2011, following Tropical Storm Irene and an October snowstorm, residents and elected officials called for the resignation of executives and improved performance during storm events.

Lamont pointed out that Eversource is on its fourth CEO in a decade.

Regulators reduced the rate of return Eversource was allowed to receive – nearly four years after those two storms.

Lamont said that type of regulation is not helpful to changing behavior.

“That makes no sense to me,” Lamont said of the current regulatory structure. “That means we’re giving you a rate of return for the good things you do, the bad things we do. There’s no incentives there for performance.”

Lamont said he would be pushing for performance-based regulation.

“It seems to me that if you do really well, you deserve a better rate of return,” Lamont said Monday. “And if you don’t perform, if you leave tens of thousands, hundreds of thousands of people without service for days on end, now we’re coming up on a week, there should be penalties to pay.”

He said it’s time Connecticut used a regulatory system where you get rewarded when you do well and penalized when you don’t.

In 2012, regulators issued a decision finding that Connecticut Light & Power, which is now Eversource, should be penalized for its poor performance: “… the Authority concludes that CL&P’s performance in the areas regarding communication to customers, other service providers and municipalities was so deficient as to be less than adequate and suitable and to warrant regulatory sanction. This deficiency also involves its lack of preparation of personnel, failure to support municipal liaisons and to reasonably develop and communicate restoration times to customers.”

Regulators called for the financial penalties to be imposed in the company’s next rate proceeding. The company contested the finding, stretching out the process for another two years until the decision became final near the end of 2014. CL&P was penalized $4.4 million, but still allowed to increase rates.

Department of Energy and Environmental Protection Commissioner Katie Dykes, who used to chair PURA, said the agency has the authority to change how the utilities are regulated now, and doesn’t need legislative approval.

“Recently, PURA has opened grid modernization dockets to look at how to strengthen metrics,” Dykes said. Those metrics include the utility’s communications.

Eversource’s outage reporting system went down at the beginning of the storm Tuesday and the company did not provide town-by-town restoration estimates to ratepayers until the weekend.

“Communication. It’s not like a piece of hardware out on your system. It’s not like a tree that you trimmed. You know it’s something you have to prioritize and practice effectively and be dedicated to from the leadership on down,” Dykes said.

Dykes said there was work that’s been done on how frequently the communication should happen and what it should include.

The idea is to make “a shift for a much more accountable structure to compensate our utilities,” Dykes said.