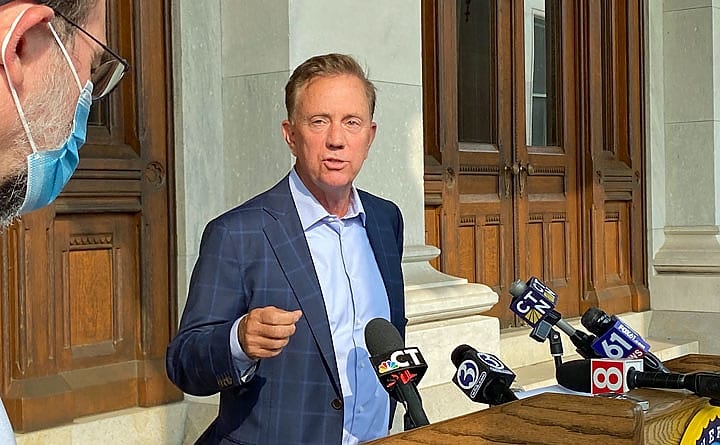 Gov. Ned Lamont made the official call for a special session of the legislature during a press conference Friday.

“We have a very high-profile election coming up in a little over a month,” Lamont said. “There’s going to be 10, 20 times more absentee ballots than we’ve ever had before and I want to put everybody’s mind at ease and give the registrars all the flexibility they need to make sure we can count these votes on a timely and accurate basis.”

Lamont also wants to approve about $500 million in funding for school construction and clean up some of the dates in major pieces of legislation, like one that allow farmers to grow hemp.

Another large shift in policy would be the elimination of the Transfer Act, which makes it harder for developers to improve environmentally contaminated properties.

“Now you as the seller have to certify in terms of where you are and what spills may be on your watch,’ Lamont said.

He said it will help get hundreds of properties back on the tax rolls and reduce the state’s involvement.

Lamont is also asking the legislature to tackle electric regulatory reform by requiring utility companies to go through a performance review, instead of receiving an automatic rate increase that benefits shareholders.

The special session will also update the state’s environmental justice to require public notice and community benefit agreements under certain circumstances. It will permit homeowners’ association to obtain loans through the “Collapsing Foundation Loan Program.” It will also permit late property tax exemptions to be filed with towns.

As far as judicial nominations are concerned, Lamont is looking to elevate Appellate Court Judge Christine E. Keller to fill a vacancy on the Supreme Court; and three Superior Court judges – Judge Joan Alexander, Judge Melanie Cradle, and Judge Jose A. Suarez – to fill vacancies on the Appellate Court.

Legislation that would require colleges to give students amnesty from discipline if they come forward with information about sexual assault did not make the agenda, but will be raised in January, according to Lamont.

Republicans have objected to holding a special session 40 days before an election.

“There is nothing on the agenda dealing with the pandemic, public health or the immediate needs in the middle of the crisis. I am honestly surprised that Democrats want to bring so many people to the building to vote on bills that are not fully vetted by the public and that can wait for the regular session – at the same time they have objected to much smaller meetings and legislative business taking place in the same building,” Senate Republican Leader Len Fasano said.

He said the agenda is a “disappointing display of one-party rule and partisan politics.”