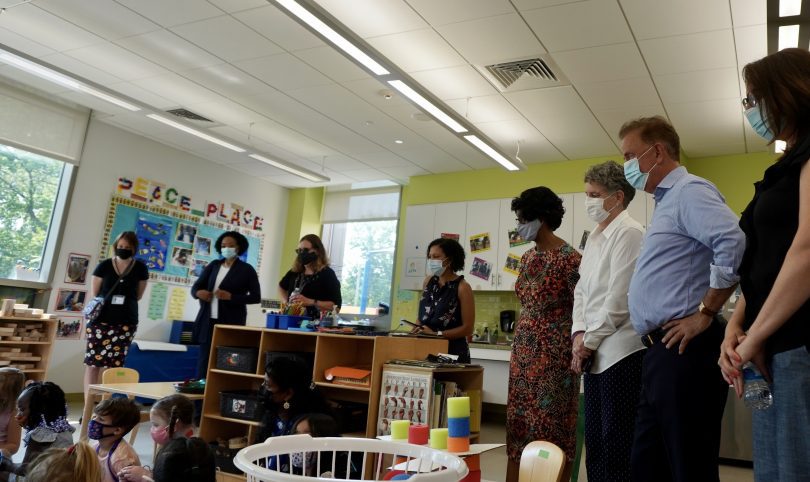 According to data reported by the state Tuesday, there were four additional positive COVID-19 cases in West Hartford.

As he awaited guidance from the Centers for Disease Control and Prevention Tuesday calling for both vaccinated and unvaccinated people to wear masks indoors in public indoor spaces, Gov. Ned Lamont said Connecticut would likely make similar recommendations.

“I think at this stage, what I’d do is probably reiterate what the CDC says, which is vaccinated and unvaccinated – if this is the way they end up going, we’ll probably continue to follow their lead and say that would be our recommendation as well,” Lamont said at a Tuesday bill signing event in Hartford.

The governor’s comments came before the CDC walked back some of its previous guidelines amidst COVID-19 spikes around the country. It called for fully vaccinated adults and kids to wear masks indoors if they live in an area with high rates of COVID transmission. Connecticut currently does not fit that category but it could based on the spread of the virus. The changes may impact recommendations for schools, where the agency had previously advised that masks need not be required for vaccinated students and staff.

So far, the governor has declined to say what guidelines or requirements Connecticut would enact ahead of the coming school year. He did not take a firm stance Tuesday, but said he was inclined to mirror federal guidelines.

However, unlike last year, when he issued an executive order requiring masks in schools, Lamont told reporters he was leaning towards issuing guidance this year, instead of a mandate but he asked for more time to make the call.

“I think guidance means guidance. Right now,” Lamont said. “Let me see what changes. As I said, look where we were three weeks ago, look where we are today. Give me another couple of weeks to see whether we’re Florida or we’re Connecticut. If we’re Connecticut, I think I give a little more discretion because we’ve earned it, we’re vaccinated, we don’t have community spread and many towns have herd immunity. But in two weeks, stuff may be happening, we gotta see.”

Whatever he decides, Lamont noted his emergency powers, which were extended by the legislature this month, last until the end of September. Assuming they expire, any requirements issued by the state would also expire unless codified in some way by lawmakers.

“That’s why I think it’s time now to start involving the legislature to see where their heads are at on this stuff,” Lamont said.

As of Tuesday, Connecticut’s COVID positivity rate stood at 2.67% and the number of patients hospitalized with the virus declined by 3 since Monday, to 105.