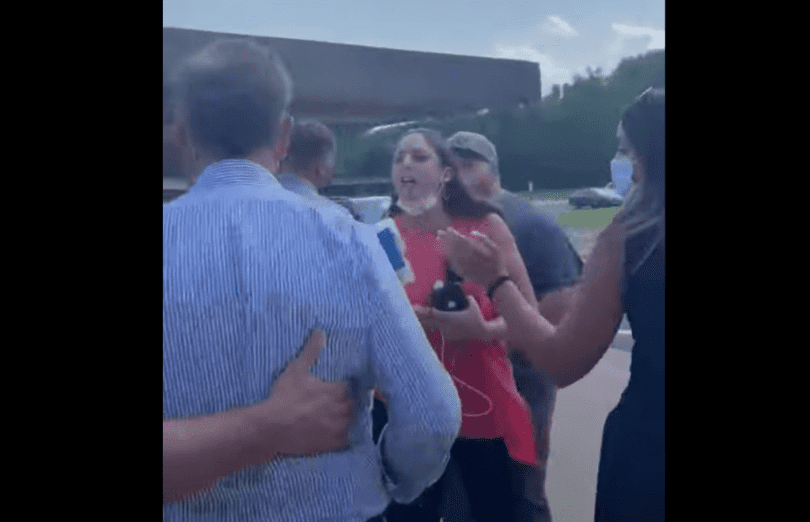 A screenshot from a Youtube video featuring Gov. Ned Lamont being escorted through a group of protesters on Aug. 25, 2021, in Cheshire, CT. Screengrab from Youtube (courtesy of CTNewsJunkie.com)

After the governor was escorted from the room, several people outside continued to confront him.

A group of people in Cheshire shouted down a roundtable discussion on preparations to safely open Connecticut schools Wednesday, prompting Gov. Ned Lamont’s quick departure and a close encounter with aggressive protesters outside.

The afternoon discussion, held at Highland Elementary School, was moderated by Cheshire Superintendent Jeff Solan and included a dozen teachers, coaches, and education professionals. Despite the lengthy roster, the conversation lasted barely half an hour.

Throughout the event, a small group of parents could be heard occasionally shouting about the discussion’s sound levels. Some had signs opposing a statewide order from Lamont which requires students and teachers to wear masks when classes resume next week to mitigate the spread of the coronavirus. Before long, the shouting devolved into heckling.

“Okay, so this is a reflection of how we can’t have a civil dialogue with – yeah, okay,” Solan said as the group shouted. For a moment, the superintendent tried to resume the discussion that had been covering quarantine requirements of students exposed to the COVID-19 virus. Then he gave up.

“At this point I’ve covered the questions I had for our panel. I definitely –” Solan said over more shouting, ending his comment. He then told the panelists, “A number of people across Connecticut want to hear what you’ve had to share today.”

Solan asked if anyone wanted to make closing statements. There were no takers. The governor was escorted from the room by his security detail and staff. A group of protesters followed. A bearded man in a gray T-shirt trailed Lamont and his entourage. He hedged in close to the governor, prompting a nudge and a raised finger of warning from staff.

The man shoved the hand away. “Don’t [expletive] touch me,” he shouted. A woman in a pink top stepped into the governor’s path, brandishing a box of face masks. “Where’s our free masks?” she said. Staff diverted the governor around her and he climbed into a black SUV. The man in gray knocked on the tinted windows, middle finger raised. “Nazi Germany,” someone else shouted.

Max Reiss, Lamont’s chief spokesman, said the governor and his staff were not injured during the incident. Given Lamont’s schedule of public events, confrontations like Wednesday were bound to happen on occasion, Reiss said.

“These bullying tactics will not change what we all know to be true and agreed upon by both the scientific and academic communities: masks work and they help to keep our communities safe, especially young children who are not yet eligible to be vaccinated,” Reiss said.

The incident mirrors reported demonstrations by anti-mask parents at school board meetings in Connecticut and elsewhere as districts across the country prepare to welcome students back to classrooms amidst surging COVID cases driven by the more contagious delta variant. On Wednesday, Connecticut posted an infection rate of 3.28%.

Lamont said little during the short event, but praised Cheshire’s school system for providing in-person learning during difficult periods of the pandemic.