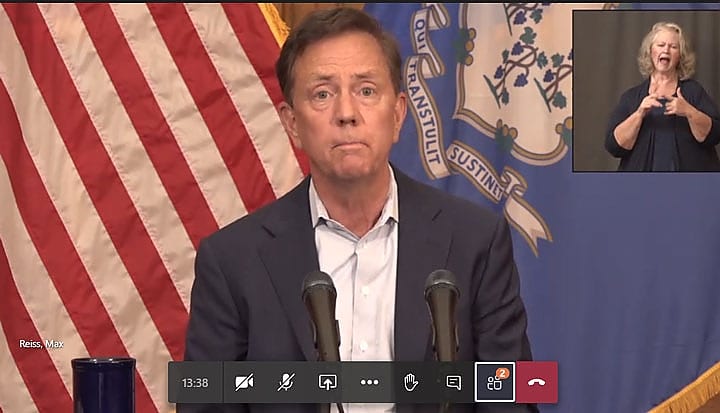 Gov. Ned Lamont held a briefing Tuesday afternoon to announce that he will call for a special session of the General Assembly to address four topics.

The state House of Representatives will be expected to convene on July 23, and House members can vote remotely from their offices. The process for the Senate has not been finalized.

Police accountability, absentee ballots, telehealth, and caps on insulin are the four policies the General Assembly will be asked to tackle in a special session.

Gov. Ned Lamont said he met with legislative leadership Tuesday and they agreed to all four of those bills.

Lamont will issue the call for a special session on Friday, which is the same day the public hearing will be held on the 63-page police accountability bill unveiled last week. Lamont said the absentee ballot issue would be limited to the November election. He said if the legislature wants to address it again in the future they can.

Lamont said the no-excuse absentee ballot changes don’t address the issue of Secretary of the State Denise Merrill mailing absentee ballot applications to all registered voters, as she did for the Aug. 11 primary. He said the legislation is silent on that issue.

Lamont said he didn’t have details on exactly how the public hearing would be conducted or how lawmakers would gather next week to vote on the legislation.

The House has the ability to vote remotely from their offices in the Legislative Office Building.

“A couple months ago we procured technology that will allow our members to vote from their LOB office or in the physical Capitol where you hit the button,” House Majority Leader Matt Ritter told NBC Connecticut last week. “So any member who doesn’t feel safe they can literally drive into the parking lot of the LOB underneath the garage, take an elevator up, go into their room, and close the door.”

Ritter said they can watch the entire debate on TV, but if they want to participate they will need to come down to the House chamber. Once they line up, they will be brought into the chamber.

The Senate voting process has yet to be determined, but there’s a strong desire to vote in the third-floor chamber and not use the House chamber.

Lamont’s Chief of Staff, Paul Mounds, said lawmakers will have a public hearing on absentee ballots early next week and public hearings for the other two bills have yet to be scheduled.

Lamont said they would extend telehealth services for Medicaid and private insurance through January. He said the insulin cap bill would be similar to the one that passed the Insurance and Real Estate Committee in March.