Gov. Ned Lamont unveiled his first legislative proposals Wednesday for 2020: a new incentive program for businesses to expand or relocate jobs to Connecticut and a revised small business assistance initiative.

Gov. Ned Lamont unveiled his first legislative proposals Thursday for 2020: a new incentive program for businesses to expand or relocate jobs to Connecticut and a revised small business assistance initiative.

“Some of the best investments we can make as a state are in companies that are already here and that want to be here,”  Lamont said during a mid-morning announcement at GalaxE.Solutions, a tech firm in the Upward Hartford collaborative for business incubators. “This sends a message to the region and the world that Connecticut supports its corporate partners.”

The proposals, which Lamont will submit to the General Assembly when the 2020 session opens Wednesday, include an “earn-as-you-grow” incentive plan, according to the governor’s office.

Businesses creating 25 or more full-time jobs will retain 25% of their withholding taxes related to the new employment for up to seven years.

Employers who meet this threshold in one of the state-designated opportunity zones, or within an economically distressed municipality, may retain up to 50% for seven years.

To earn either benefit, businesses must pay salaries equal to or greater than 85% of the median household income for the municipality in which they are located.

Though Connecticut’s economy has picked up steam in recent years, income growth here in 2019 was 3.5%, a little below the national mark of 4.4%, said state Economic Development Commissioner David Lehman.

For that reason, businesses looking to take advantage of the incentive program would have to create jobs in the following high-paying fields: aerospace/defense; clean energy/renewables; corporate headquarters; distribution and logistics; entertainment and digital media; financial services; information technology; life sciences; manufacturing; or research and development.

Both Lehman and Lamont said the goal is to retain more of Connecticut’s high school and college graduates, particularly those in science, technology, engineering and math [STEM] fields. 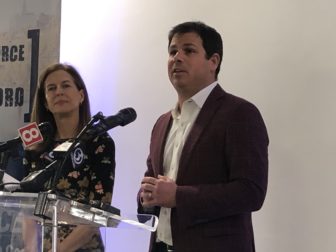 Lamont’s first budget, signed last June, canceled a previously approved state income tax cut for STEM graduates who stay and work here. That tax break would have been worth nearly $8 million in total to these graduates next fiscal year, and almost $20 million by 2024.

But administration officials said canceling that tax break was not a mistake. That’s because another goal is for state government to pay less in exchange for the jobs it helps to generate.

A frequent criticism of Lamont’s predecessor, Gov. Dannel P. Malloy, was that his administration was too generous with its incentives, particularly given the salary levels tied to the jobs that they did create.

Lehman estimates that during the last three years of Malloy’s tenure, Connecticut paid about $16,000 in incentives for each job it helped to create. The new administration is sticking closer to a range of $5,000 to $10,000.

“We need to be mindful that Connecticut taxpayers are on the other side of these incentives,” Lehman said.

Lt. Gov. Susan Bysiewicz also noted that the administration’s second new proposal is aimed at boosting small businesses and others that might not have access to the same start-up or expansion capital available to larger companies.

Small Business Express 2.0, named and partly patterned after a program Malloy launched in 2011, will focus more on partnering with banks, helping to guarantee their loans and spur more private investment in small businesses.

But there also will be some direct lending on the state’s part. Bysiewicz said the focus here would be on the disadvantaged, such as small businesses in Connecticut’s poor urban centers, minority-owned companies and businesses started by women, the disabled and veterans.

“Over the last decade, the Small Business Express program has helped many entrepreneurs, including women and minorities, build their businesses and create jobs right here in Connecticut,”  Bysiewicz said. “These new legislative proposals will build on those successes and grow our state’s economy in order to increase our economic competitiveness, while also reducing costs to our taxpayers.”