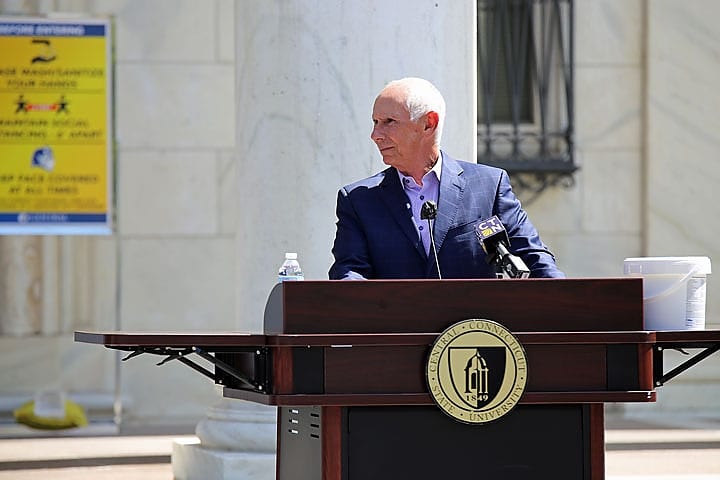 Mark Ojakian, president of Connecticut State Colleges and Universities, said he is confident that the students can act responsibly.

Gov. Ned Lamont told college students returning for the first day of classes Wednesday to remember it’s up to them to keep their college campuses safe.

“I can’t keep [the COVID-19 positive rate down] unless the students help keep it that way,” Lamont said from the steps of Davidson Hall at Central Connecticut State University.

Lamont said that students should remember to follow state and university guidelines concerning measures like wearing masks at all times in public, maintaining social distancing, and keeping social gatherings to a minimum.

“I don’t wanna be Governor Killjoy, but I also know we’re going to have to work hard to keep our colleges safe,” Lamont said.

“Everyone on campus must be part of the solution,” Ojakian said. “We’re ready to serve all of our students.”

Ojakian referenced the swift action taken by the University of Connecticut when a group of about a dozen students were found having a small gathering without masks.

“Very quickly, they were sent home for the protection of the community,” UConn President Thomas Katsouleas said.

“Keep those social gatherings safe,” Gifford said. “If we all work together and follow these rules, [the DPH is] also confident in a successful return to campus.”

She added that students and other communities should take advantage of the 160 free COVID-19 testing sites around the state even if they are not showing symptoms, noting that self-testing helped to trace the current spike of cases in Danbury. 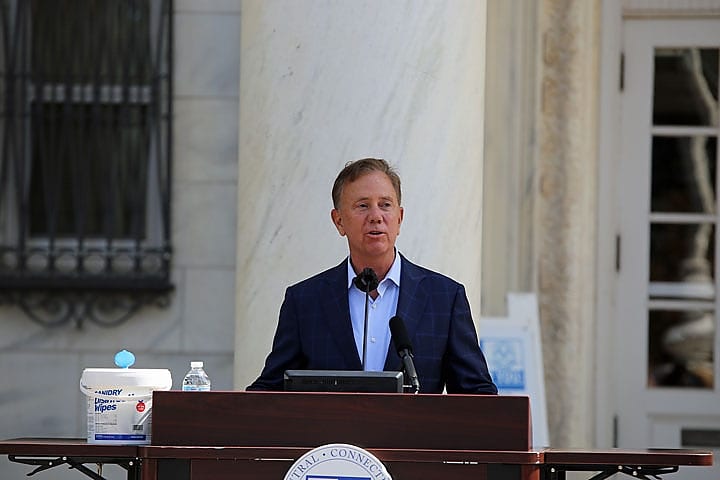 Furthermore, she said that the DPH is prepared to suggest changes to university safety guidelines or to recommend a shutdown, as was done with Western Connecticut State University in Danbury, whose campus is currently on lockdown.

She said the biggest challenge for colleges was the quarantine of students returning to housing on campus from hotspot states.

“That was a challenging logical effort to put in place,” Gifford said.

Toro noted that CCSU has specifically invested in its online courses so that they are “superior” to anything the university has ever offered before.

Katsouleas also said that UConn is testing commuters and staff, and that the university is focusing its efforts on containing a cluster of cases amongst athletes.

Ojakian told students that he’s confident their fall semester should be successful.

“Many have dismissed your ability to be socially responsible. I believe very strongly that the students from Connecticut and those that come into Connecticut will rise to the occasion and prove all of those naysayers wrong,” Ojakian said.

Lamont stated that he “loves” that colleges are reopening and hopes that students put in the effort to stay safe so that campuses can stay open.

“Not everything is 100 percent safe. But we’re doing everything to keep it as safe as humanly possible,” Lamont said.

This press conference comes after the legislature’s Higher Education and Employment Advancement Committee asked CSCU to reevaluate the safety measures in its campus reopening plans. Ojakian said that the suggestions were not in line with DPH guidelines and that reopenings would be going through as planned.