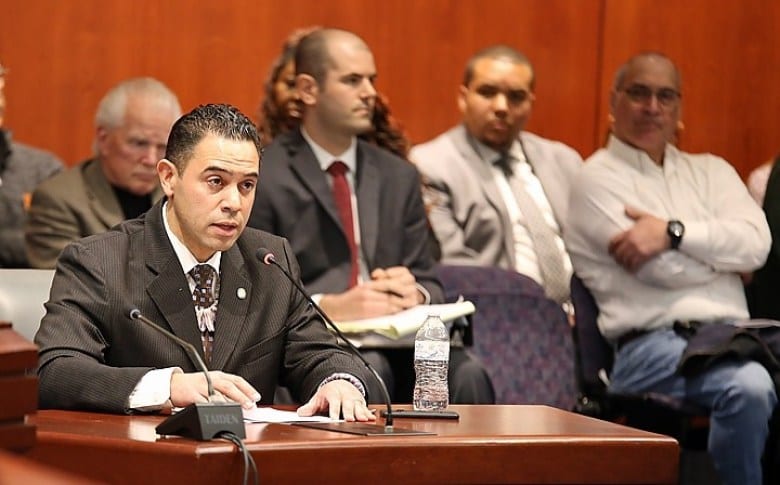 All three parties testified before the Public Safety and Security Committee Tuesday.

A deal between Gov. Ned Lamont’s administration and the Mohegan Tribal Nation would allow the Connecticut Lottery a hand in online gambling and sports betting, assuming the state can get the approval of the Mashantucket Pequot Nation.

Lamont announced the agreement via press release Tuesday after all three parties testified before the Public Safety and Security Committee. The deal with the Mohegans would tax online gaming at 20%, sports wagering at 13.75%, and allow the Connecticut Lottery to operate 15 retail sports betting locations, including at venues in Hartford and Bridgeport.

In a press release, the governor praised the Mohegan Tribe as a “devoted partner” and the tribe’s chairman, James Gessner Jr., said he was proud of the agreement forged with the Lamont administration.

“This path will allow Connecticut to generate tax revenues from sports and online gaming that are competitive with other states, and help keep Connecticut with those states when it comes to growing our economy and benefiting the state budget,” Gessner said.

Absent from the press release and the agreement was the Mashantucket Pequot Nation, whose chairman, Rodney Butler, had earlier Tuesday urged Lamont to reconsider plans to announce a two-sided deal before the state and his tribe could find agreement.  Later, he released a statement calling the administration’s actions disrespectful.

“After months of closed-door negotiations, it’s offensive that Governor Lamont would announce an agreement with only one of the two Tribal Nations that have been a party to the negotiations, despite full knowledge that both sovereign Nations are needed to implement any agreement. We have participated in these discussions in good faith and consider today’s events extremely disrespectful in terms of process and substance,” Butler said.

Negotiations between the three parties seemed to stretch across the committee’s hearing Tuesday. Lamont’s chief of staff, Paul Mounds, told lawmakers the administration had been in talks with the tribes as recently as Monday night and had virtually reached a deal with the Mohegan Tribal Nation. The administration was still working to iron out a sticking point with the Mashantucket Pequot Nation.

“I can say right now today that we are at the precipice of agreement with the tribal nations. We are, I will say, closer to agreement with one than the other,” Mounds said.

Butler told the committee the agreement was hung up on one point — a revenue issue, which he characterized as trivial for the state but important to his tribe’s welfare.

The amount in question was “less than a rounding error for the state, but to my nation it means sustainability. It means whether or not there is a million or more that goes one way or another that, for us, is critical to funding our health care for our elders. For funding education to our tribal youth, for providing public safety for our reservation and our lands,” Butler said.

Butler said his tribe had already made “significant compromise” during negotiations and the deal in question well exceeded the amount of new gaming revenues Lamont planned for in his budget proposal.

Connecticut has debated legalizing sports betting and expanded online gambling for years. But the process has been complicated, in part due to the state’s casino gaming and revenue sharing compact with the tribes, who own and operate Foxwoods and Mohegan Sun resort casinos.

Both tribes have maintained that gaming compact extends to online and sports betting. Off-track betting operator Sportech and the Connecticut Lottery Corporation have also sought a role in the new markets.

During a Tuesday press conference, Butler told reporters the Lamont administration had been lobbying hard to ensure that the lottery was included in the deal. Rob Simmelkjaer, chairman of the lottery’s board of directors, made the case for its inclusion to lawmakers Tuesday. Lottery revenues contributed $348 million to Connecticut’s general fund in Fiscal Year 2020, he said.

“That was $150 million more than both the tribal casinos combined. As this committee considers the largest expansion of legal gaming in our state in a generation, our message is pretty simple: the Connecticut Lottery is your— it is the state’s gaming company,” Simmelkjaer said.

Rep. Kurt Vail, R-Stafford Springs, told members of the Lamont administration they should consider allowing Sportech a stake in the sports wagering market.

“I shouldn’t have to go to the casino. What if I wanted to go out to a nice restaurant, you know go to Bobby V’s or go to Sports Haven down in West Haven and go watch the Super Bowl, watch a playoff game and throw some money on the game?” he said.

Lamont officials said they had not included the off-track betting operator in the discussions and were looking to first reach a consensus with the tribes.

“The tribes are the significant gaming presence in the state. It’s critically important in our mind that we reach agreement with the tribes as the first step,” said David Lehman, commissioner of Economic and Community Development.

The agreement announced Tuesday afternoon does give the CT Lottery the right to sub-license some of those locations to the state-licensed pari-mutuel operator. However, Sportech issued a statement saying the terms of the agreement would likely result in a legal challenge from the off-track betting operator.

“Regretfully, the Governor’s announcement this afternoon, that principally excludes Sportech from expanded gaming, leaves us with little option but to pursue legal recourse on behalf of our 400 Connecticut employees,” a spokesperson for the company said in the statement.

Lawmakers from both parties seemed motivated to pass legislation legalizing the new forms of gambling if the administration and the tribes managed an agreement. Vail urged compromise from those involved in the negotiations.

“I don’t think that we’ve hit roadblocks because people are against gaming. We see the future. The roadblock is the people that are involved in it, they can’t come to any type of agreement and then who loses out in the end are the citizens of the state of Connecticut,” he said.