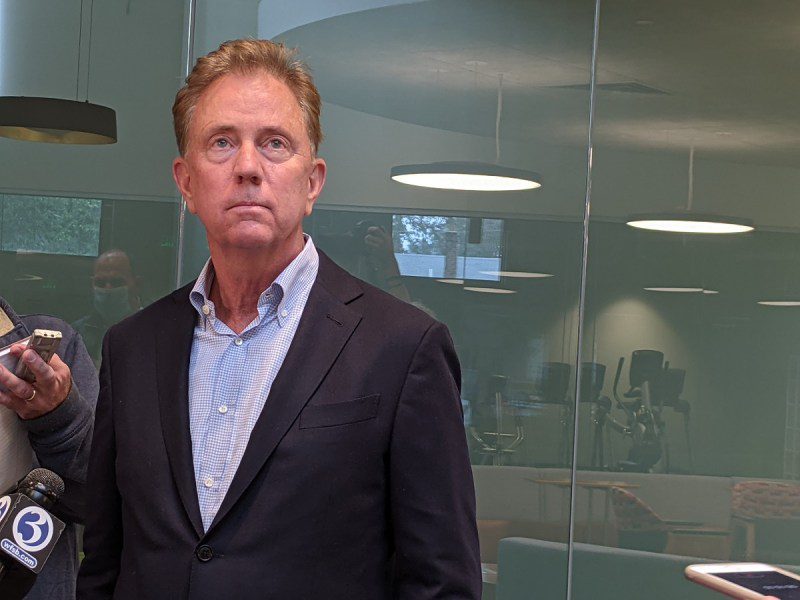 The administration expects most of the remaining noncompliant employees to submit required documentation so impact will be limited.

Gov. Ned Lamont did not expect to require support from the Connecticut National Guard to supplement executive branch workers who had not been vaccinated or consented to COVID testing ahead of a midnight deadline Monday.

Though he directed the National Guard last week to plan for activation as thousands of state workers remained out of compliance with a vaccination or weekly testing mandate, Lamont downplayed the severity of potential staffing shortages following an unrelated press conference Monday afternoon. Lamont said the guard was still on standby but did not expect to need their help filling in staffing gaps.

“We’ll have a much better idea within 24 hours but right now I’m pretty confident the state employees are doing the right thing, getting vaccinated or tested, taking care of the people most in need and doing it safely,” the governor said.

As of Sunday afternoon, about 23,000 or 74% of state employees were fully vaccinated, 5,000 or 15% agreed to weekly testing, and 3,000 or 11% were non-compliant. On Monday, Lamont eschewed the term “non-compliant,” telling reporters that he believed tech errors or honest mistakes were at the root of many instances where employees had not reported their intentions. He said those workers should reach out to their human resources representatives.

As of 4 p.m. Monday, the governor said that 2,200, or 7%, remained noncompliant while 76% reported being fully vaccinated and 17% had agreed to weekly testing.

“Some people are just ‘I thought I had already filed. I thought you knew I was already vaccinated.’ Let’s see how it sorts out another day or so,” Lamont said.

In August, the governor ordered that state workers along with K-12 teachers and education employees provide proof they had been vaccinated against the COVID-19 virus or comply with a weekly testing requirement. Employees at state health care facilities do not have an option for testing.

The governor’s mandate applies only to executive branch employees. However, the judicial branch announced the same requirements of its staff and as of Monday, a spokesperson reported that more than 95% of its 3,729 employees were in compliance. The legislative branch has not yet followed suit but expects to implement the requirement sometime this month, according to the executive director of the Office of Legislative Management.

The state negotiated the requirement with the State Employee Bargaining Agent Coalition. The mandate had initially been scheduled to take effect on Sept. 27, but the administration extended the deadline until Monday. Last Friday, the coalition of unions called on the governor to delay implementation another 20 days. The group said it had “zero confidence” in the administration to collect accurate compliance figures by Monday.

“[A] strict implementation of the executive order could trigger extremely harmful consequences for workers and the people of Connecticut depending on the services they provide,” SEBAC officials said in a post on its website.

The governor told reporters he wouldn’t allow anyone to be placed on unpaid leave if they had inadvertently failed to comply with the mandate.

“Look if it’s an inability, it’s a good faith effort, they need a couple days, we’ll work with you,” Lamont said.

Asked if the administration would begin putting workers on leave Tuesday, Lamont said he wasn’t sure.

“But let’s face it, if you’re not vaccinated and you don’t get tested, you’re probably not the person to be taking care of people with special needs in congregate settings and otherwise,” he said. “So let’s make sure we get all the paperwork processed and then we’ll do what we can to keep people safe.”