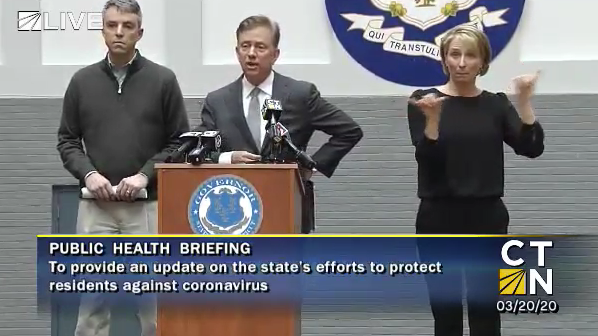 Gov. Ned Lamont announced a ‘stay safe, stay home’ policy Friday afternoon, ordering all non-essential businesses – to be more clearly defined by the end of the weekend – to close temporarily unless employees can work from home.

Gov. Ned Lamont took another step Friday to contain the spread of the COVID-19 coronavirus, ordering non-essential businesses to either close until the crisis passes or allow their employees to work from home.

“Major manufacturing” and construction could continue to operate and restaurants can continue to provide take-out service, but dine-in remains prohibited by an earlier order.

Businesses that don’t comply with the order, which is expected to take effect Monday, will be fined, Lamont said.

Lamont also announced four people have died to date from the coronavirus, with 40 hospitalized and 194 confirmed cases overall in Connecticut, including the first case from New London County. The most recent fatality was in Fairfield County, the governor said, but he did not release further details.

West Hartford announced its first case Friday afternoon, a woman between the ages of 20 and 30.

Lamont said they are now testing close to 1,000 people daily in the state, adding that the state initially was testing just 20 per day.

“The name of our policy is stay safe, stay home and we’re going to get through this working together,” the governor said during an afternoon press conference in the state armory. “Anything we can do to slow the rate of infection of COVID-19.”

“I think this is a virus that knows no borders,” Lamont said, noting his latest order mirrors a decision Friday by New York Gov. Andrew Cuomo, who placed the 19 million people in his state on a similar lockdown starting Sunday night. New Jersey Gov. Phil Murphy also announced Friday that he will order the closure of all nonessential businesses.

Lamont issued a call to companies with access to personal protective equipment, including N95 masks and latex gloves, to donate the products or make them available for purchase. For businesses with the ability to manufacture such goods, the governor said state officials would place orders or provide incentives to help them get started.

“When it comes to protective equipment – gear, masks, ventilators – there’s a nationwide shortage,” he said. “We did get a small allocation from the feds. We’re getting that distributed now to our hospitals and nursing homes. But we have a long way to go.”

Dalio Philanthropies announced Friday it had donated $4 million to support medical care and food for the needy during the public health crisis. And $3 million of those dollars would be directed toward day-care facilities to support hospital workers at 26 sites across Connecticut.

In response to the COVID-19 pandemic, Barbara and Ray Dalio and Dalio Philanthropies today announced a $4 million donation in support of medical care and food for those who are most stressed and cannot afford it.

Dalio Philanthropies is run by hedge-fund giant Ray Dalio and his wife, Barbara.

The state Department of Labor reported about 16,000 claims for unemployment benefits Friday – about eight times the level reported one week ago.

Deputy Labor Commissioner Daryle Dudzinski told The CT Mirror that just a few weeks ago, before most coronavirus-related closures had happened, the department had been receiving roughly 3,000 new jobless claims per week.

And according to a spokeswoman for Attorney General William Tong, 155 complaints of price-gouging had been received by his office through Friday morning.

That’s more than double the 71 complaints Tong had reported on Tuesday – after his first week of trying to crack down on price-gouging tied to the public health crisis.

Consumers who suspect price gouging can file a complaint with Tong’s office by visiting his website at https://www.dir.ct.gov/ag/complaint/ or by calling 860-808-5318.

The Coast Guard Academy said Friday that a 20-year-old male cadet has tested positive for coronavirus after he and six other cadets returned from a Spring Break trip to Spain.

A civilian friend who was on the trip also tested positive, the academy said.

The group was ordered to return to the United States after Trump suspended travel from Europe last week. The six other cadets are in self-isolation in their homes while the academy arranges for their testing.

Last week, the Coast Guard Academy  directed cadets to remain away from the school for an additional two weeks following spring break.