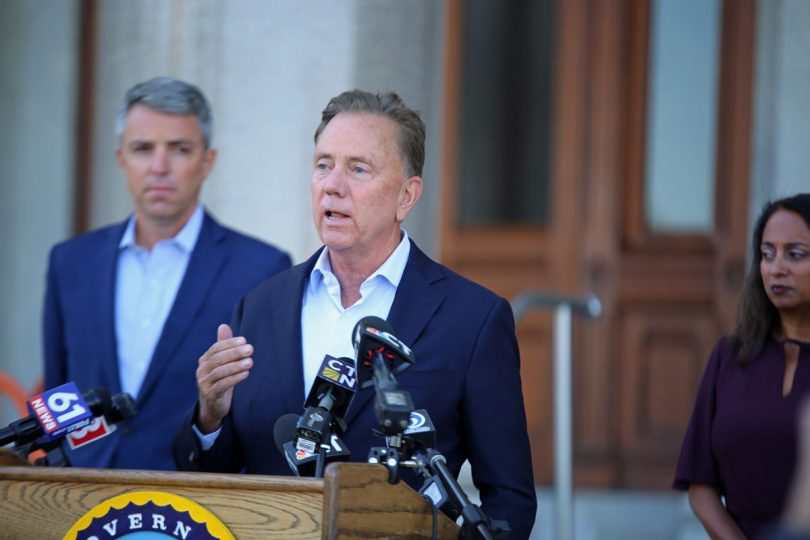 Between Wednesday and Thursday, an additional 2,000 state workers have consented to the mandate to be vaccinated or tested weekly.

Gov. Ned Lamont on Thursday directed state agencies to brace for possible staffing shortages in case potentially thousands of state employees are soon placed on leave for refusing to comply with vaccination or COVID testing requirements.

In a press release, the governor said he had also directed the Connecticut National Guard to plan for activation in the event that health care and safety agencies require support as a result of staffing shortages. Lamont said he was optimistic the contingency plans would not be necessary.

“But as we have done throughout the pandemic, we will prepare for the worst to prevent impacts to the critical services the state provides,” Lamont said. “The health and safety of our employees and the people of Connecticut remain our top priority.”

As of Thursday, 20,000 state employees – almost two thirds – had reported being fully-vaccinated. Another 4,000 had begun complying with the weekly testing option but more than 8,000, about a quarter of the executive branch workforce, had not reported doing either.

Last month the governor ordered that state workers along with K-12 teachers and education employees provide proof they had been vaccinated against the COVID-19 virus or comply with a weekly testing requirement. Employees at state health care facilities do not have an option for testing.

The order had been scheduled to take effect this week but was delayed until Oct. 4. Employees who refuse both options will be put on unpaid leave no later than Oct. 11, the administration has said.

“We have provided most state employees with the option to get tested weekly instead of getting vaccinated, providing more flexibility than our neighboring states,” Lamont said. “We have also provided our employees with a compliance grace period. There is no reason all our employees should not be in compliance. I continue to count on state employees to lead by example and to respect their co-workers and the public by complying with this executive order, which is the law.”

The number released Thursday by the administration show an additional 2,000 workers had consented to the mandate since Wednesday when the governor last provided an update. At the time, Josh Geballe, state chief operating officer, declined to discuss what disciplinary actions may ultimately be taken against non-compliant workers, calling it a “question for another day.”

Last week, the State Employee Bargaining Agent Coalition, a group of unions representing state workers, posted a notice on its website saying that state employees should report to work this week unless directed otherwise. According to the labor group, several issues related to the requirement remain unresolved and some may ultimately be decided by a neutral arbitrator.

“Such issues include whether outside of mandatory testing facilities, testing should be paid for by the State and on State time, the exact nature of the consequence for not complying with the executive order, and whether there should be a cash incentive associated with being vaccinated,” the labor coalition wrote.