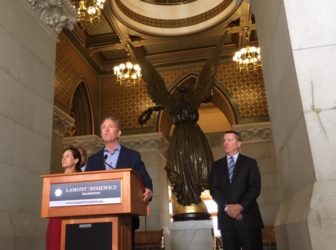 Gov.-elect Ned Lamont does not plan to announce his first appointments until next week.

Back from an orientation seminar for new governors, Gov.-elect Ned Lamont outlined an approach Monday to finding “the best and brightest” for his new administration, hinting that some top appointees would be executives from outside politics who are willing to accept a pay cut to work for Connecticut.

Two senior human-resource executives, Kevin Myatt of Yale New Haven Hospital and John Denson of the global executive recruiter, Korn Ferry, were introduced as the co-chairs of a talent search committee that Lamont says is intent on broadening the typical pool of potential appointees.

Lamont is not expected to announce his first appointments until next week, putting him roughly on the same pace set eight years ago by Dannel P. Malloy, the first Democrat elected governor in 24 years. By this point, Malloy already had named a chief of staff and budget director, but he was four days away from identifying a 22-person transition team. Lamont named his 19-person team last week. [Editor’s Note: Included among the members of the transition team are West Hartford residents Attorney General George Jepsen and Deputy Mayor Beth Kerrigan.]

Ryan Drajewicz, 39, of Fairfield, an executive at the hedge fund, Bridgewater Associates, and a former aide to U.S. Sen. Chris Dodd, is executive director of the transition, a job that typically goes to the person who will be the governor’s chief of staff. But Lamont has not said if he has settled on a chief of staff or the secretary of policy and management, whose extensive portfolio includes the state budget.

It is unclear the extent to which Lamont is considering organizational changes. At the National Governors Association orientation over the weekend, Lamont said, briefers talked about states that are creating the position of chief operating officer.

The new administration’s primary goal is to fill about two-dozen positions, both in the governor’s office and at state agencies. Eight years ago, Malloy had named five department heads by the third week of December and was conducting national searches for executives to run four others: Transportation, Education, Environmental Protection, and Social Services.

On Tuesday, Lamont and Lt. Gov.-elect Susan Byswiewicz will be briefed by the Office of State Ethics on rules concerned financial disclosures and conflicts of interest. The governor-elect’s wife, Annie Lamont, a co-founder of a venture capital firm, will have her own briefing.

In a brief interview after her husband’s election, Annie Lamont said none of the startups she has helped finance do business with  the state.

“We don’t have any right now, and I think we’ll be careful to avoid that in the future,” she said.

But Annie Lamont said she is mindful of the potential for conflicts or appearances of conflicts as a venture capitalist whose husband’s job as governor includes promoting economic growth. She said the Lamonts have heard from people interesting in bringing jobs to Connecticut.

“We’re really jazzed up about being advocates and champions for state,” she said.

The Office of State Ethics had also provided an ethics briefing to Cathy Malloy, another first lady with her own career. She is the chief executive officer of the Greater Hartford Arts Council.